An Arizona Power of Attorney is a document that allows the principal to grant specific powers to an agent to handle certain matters.

The agent may be tasked with handling issues like the principal’s finances, medical care, and parental responsibilities. For example, if a person is unconscious due to an accident or ailment, their agent can make medical decisions on the type of treatment they should receive if presented with more than one option by the doctor. The agent must ensure that the decisions made are in accordance with the principal’s wishes. A prospective law that can be considered when filling and signing a power of attorney in Arizona is Title 36, Chapter 32 of the Arizona Revised Statute, (A.R.S. § 36-3201-3224) which governs creating an Arizona medical power of attorney.

There are numerous types of POA in Arizona. Understanding the various powers of attorney will help ensure that the appropriate information is included in the document. It also helps ensure that both parties understand the powers being transferred and state laws surrounding them.

The following are the various type of power of attorney in Arizona:

A living will is a power of attorney in Arizona that spells out an individual's end life medical care preference. It is used where an individual has a terminal illness and cannot communicate their preferences themselves. It outlines whether medical staff should sustain the individual's life or withdraw it. It is signed in the presence of a witness, or a notary public as indicated in § 36-3261(b). A living will align with statutory laws indicated in § 36-3261 and § 36-3262.

A medical power of attorney allows a principal to grant powers to an agent to make health care sessions on their behalf in Arizona. It is used if the principal is unable to communicate their medical choices themselves. A medical power of attorney should align with statutory laws outlined in § 36-3224. It should be signed in the presence of one witness or notary public as indicated § 36-3221(a)(3). It is often used by individuals who recently had surgery or those suffering from illnesses like Dementia or Alzheimer's

In Arizona, a minor or child power of attorney or Delegation of Parental Powers of Attorney enables parents or guardians to grant another person temporary legal rights to decide their minor child's care. It is used if the principal is incapacitated, unavailable due to activities like traveling overseas, or unable to care for the child for other reasons. In Arizona, the agent's temporary guardianship can go up to 6 months, while active military officers can go for up to 1 year. Non-military residents of Arizona should ensure that their power of attorney adheres to the statutory laws outlined in § 14-5104, while members of the military should consider the laws outlined in § 14-5107.

The Real Estate Power of Attorney

A tax power of attorney form enables the principal to authorize the agent to handle task-related matters on their behalf. The agents will be responsible for working with the Department of Finance in the state of Arizona. It is the only type that does not need to be acknowledged by a notary public or witness.

How to Fill a POA Form

The following is a step-by-step process on how to fill an Arizona power of attorney:

An agent over the age of 18 should be selected. The agent selected could be a spouse, business partner, close friend, or other individual trusted by the principal. The individual selected should have a clear understanding of the principal’s interests. The principal can opt to assign more than one agent if the primary agent is unable to fulfill their duties. When choosing an agent, A.R.S § 36- 3221 and §36-3224 should be reviewed to ease the selection process.

They may also be empowered to make post-death decisions like whether an autopsy should take place, if the principal’s body can be donated to research or what funeral plans should be made. Suppose limitations are not outlined in the power of attorney form according to the state of Arizona.

In that case, the agent has full authority to decide on the matter they are assigned. It is also crucial to review what state law outlines concerning the powers the principal wants to transfer. For instance, if the principal wants the agent to make medical decisions, statutory laws outlined in  A.R.S. § 36-3221 and § 36-3223 should be considered.

Arizona’s signing of a power of attorney should be per the stipulated state laws. For example, the state will specify the number of witnesses present or whether it should be notarized. The laws also describe who can and cannot be a witness. Therefore, a specific form to Arizona should be used as it eases the principal’s ability to meet signing requirements.

Lastly, copies of the power of attorney form should be distributed to a third party affected by the principal’s decision to appoint an agent. These parties include financial organizations such as banks and healthcare organizations like hospitals. The agent should also have a copy of the document. 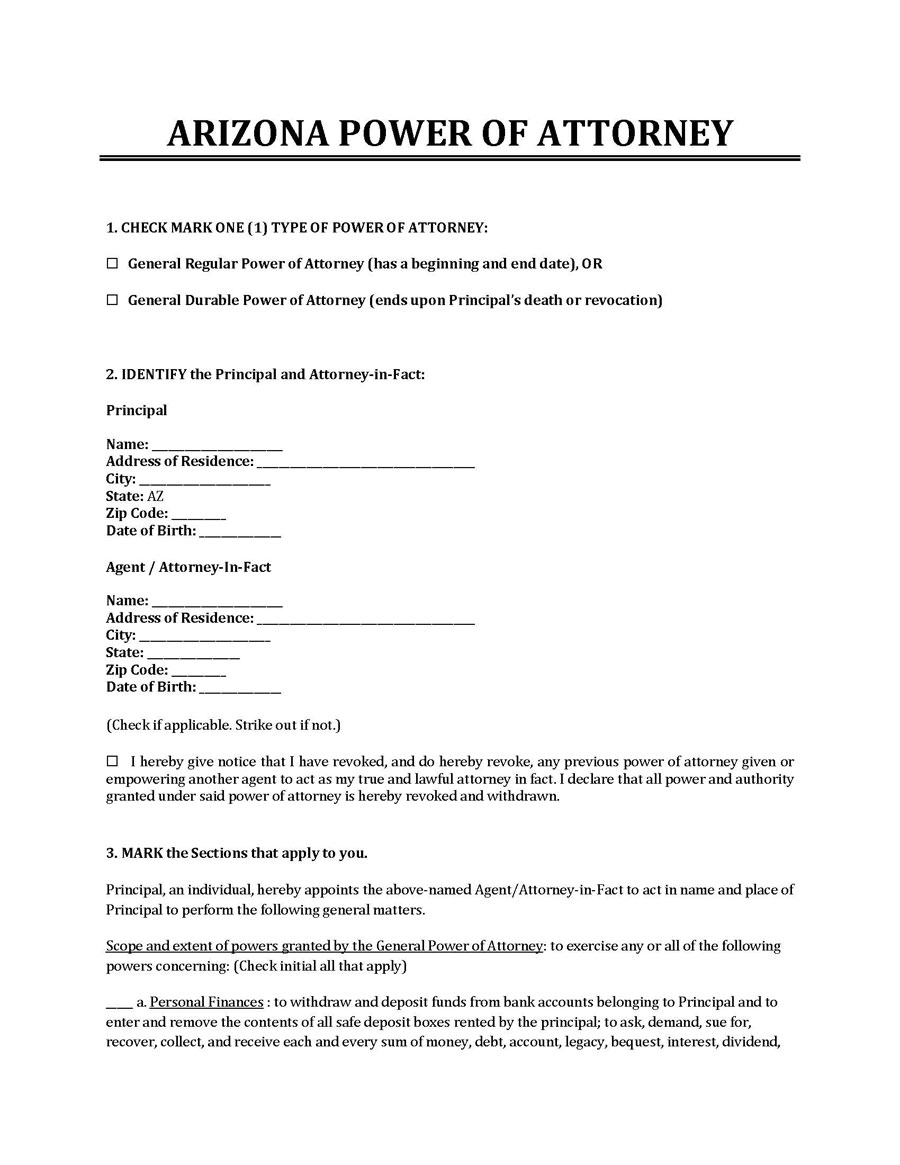 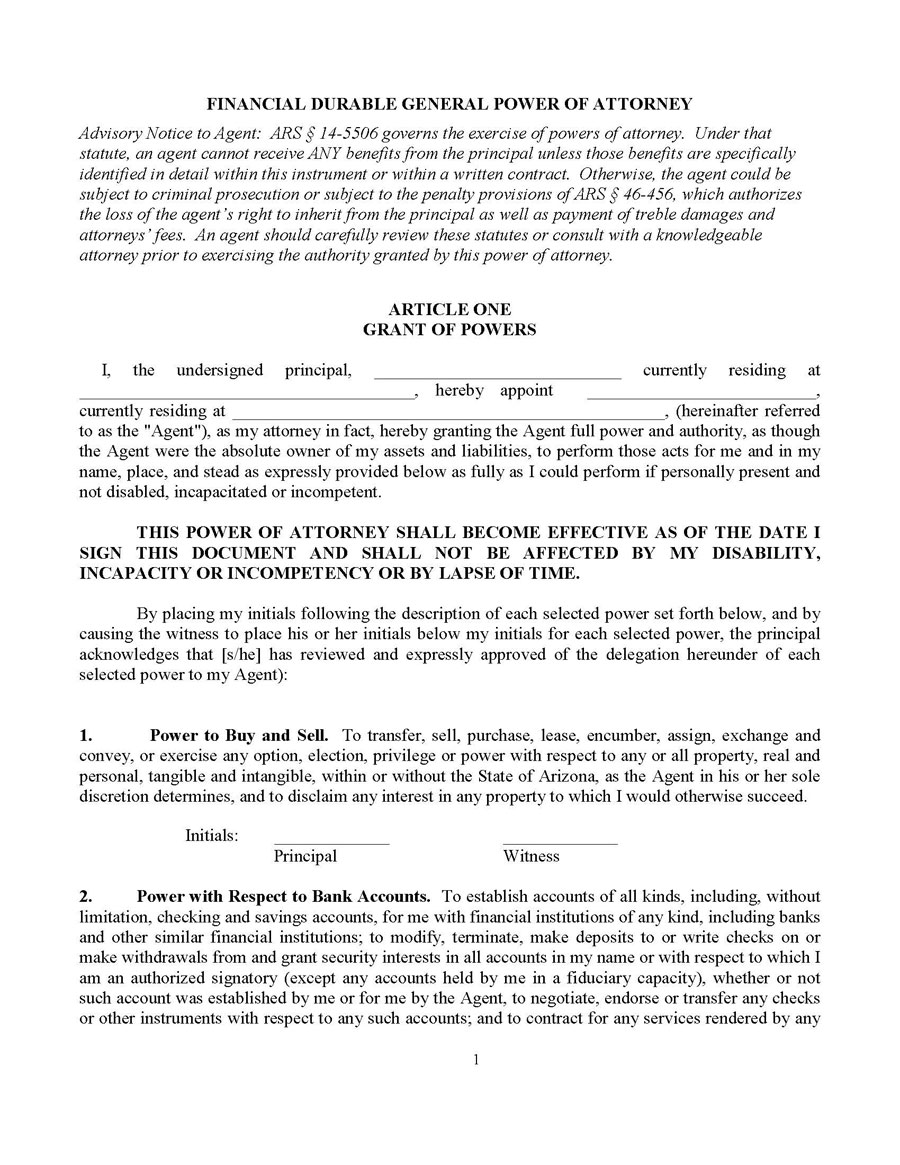 How to Revoke Power of Attorney in Arizona?

A power of attorney in Arizona can be revoked by creating a revocation form to cancel the agent’s powers. The principal can also revoke the agent’s powers by writing a statement disqualifying the powers granted or informing the agent that their powers have been revoked. A new power of attorney can also be created with different terms, which would make the previous document void. Any action by the principal that indicates a clear intent to revoke powers should signify to the agent that the powers are no longer in effect.

Can someone take away the power of attorney?

Power of attorney can be revoked under various situations, including if a principal of a sound mind decides to revoke it or if the principal was not of sound mind when the document was written. It can also be revoked if the principal was manipulated, under undue influence, abused, or defrauded into transferring the powers. Finally, if a court finds that the agent has abused the authority transferred to them or failed in their fiduciary responsibilities, then the judge may revoke the powers.

What is the alternative to a power of attorney?

How do you change the power of attorney?

Can you limit the scope of the powers to certain things but not others?

Yes, the scope of a power of attorney can be as narrow or as wide as the principal would like it to be. However, an attorney should be consulted to help ensure that the principal’s wishes are conveyed appropriately in the document.

Can more than one person have power of attorney?

More than one agent can have power of attorney. However, keeping the agent’s list short is advisable to avoid conflict when enacting the powers. One person can be the primary agent, while another can be an alternative agent.

What happens if the agent dies?

The alternative agent can take over the powers if the primary agent dies. Therefore, it is advisable that when creating a power of attorney, a principal should consider appointing more than one individual.