In some cases, clients enlist legal professionals and offer to pay them based on the quality of their services and/or performance as it relates to the terms of the contractual agreement between both parties. This is known as a contingency payment, rather than a salary or a one-time payment. To make such an agreement legally binding, clients will have to draft a contingency agreement between themselves and the individual they hire. To give you a better idea, it works somewhat like this – If a lawyer, for instance, wishes to be paid a percentage of a settlement that they negotiate, they may sign a contingency agreement with the client to make such an agreement legally valid and enforceable.

What Exactly is a Contingency Agreement?

A contingency agreement is unique in the sense that it only applies to a relationship between a client and a licensed attorney. Additionally, it doesn’t guarantee any payment to the attorney. Instead, it is only applicable when the party represented by the attorney actually receives an amount as a direct result of the attorney’s services. For example, if an attorney represents a client in an ongoing legal dispute and is able to either leverage a settlement or win damages through a court of law, the attorney will be entitled to a portion of that amount by virtue of a contingency agreement.

Such an agreement is typically signed when the client has no means by which he can afford to pay the client’s hourly rate, serving as a viable alternative for those who cannot afford legal representation. It is also a way in which the attorney, if representing a sizable client, may earn much more than they should through an hourly wage, making it a mutually beneficial and acceptable agreement in most cases. If, in the case that the lawyer fails to win any damages or come to a settlement, they won’t be entitled to any payment at all, if a contingency agreement has been signed.

How Much Will the Contingency Fee Be?

Legally speaking, the contingency fee doesn’t have to be any particular amount or a specified percentage, either. The actual amount often comes down to the discretion of both the client and the attorney, and what they agree upon. General Convention, however, is slightly different – If an attorney is representing a client that cannot afford to pay the hourly rate, they typically charge 25-33% of the total amount of damages or settlement money the client receives. If they are representing a client that can afford the hourly wage but wish to pursue a contingency agreement because they stand to earn much more, the percentage value typically drops to 10-12%, given the fact that they deal with settlements and/or damages of much higher amounts. Once again, if they fail to come to a settlement or win in court, they won’t be entitled to any payment at all.

Drafting a contingency fee agreement is a fairly straightforward process – The first step is to find an attorney that will be open to the idea of a contingency fee. Typically, this is limited to pro-bono attorneys, or specialists in a particular field. The exception to that is if a big business or corporation requires attention towards a particular legal matter.

There are also a number of online resources that help people who can’t afford an attorney connect with attorneys that will work on a contingency contract, so do some research before settling on an attorney. Next, you will have to negotiate the particulars (the percentage fee, satisfaction criteria, term of the contract) and add those details to the contingency agreement.

Once you’ve settled on an attorney, the drafting of the contingency agreement is very simple. To help you out and make things easy, we’ve drafted our very own contingency fee template that may be used as-is or can be modified to suit your exact needs and situations better.

(Only applicable if the contingency agreement is being drafted on behalf of a firm.)

The client/attorney/firm, acting upon their wishes to transfer charge of legal proceedings regarding the case, hereby specifies the following firm/attorney to whom they wish to transfer the case too;

Furthermore, the attorney will be entitled to any bonuses/percentages stemming from a previously signed retainer agreement, as well as a percentage, as specified in the section below, of the total amount received by the client upon termination of all legal proceedings. The client maintains the right to accept or decline any offers of settlement and will be solely responsible for accepting or declining. Upon settlement, the attorney/firm will be entitled to a percentage of the amount receivable, as detailed in the section below;

It is hereby agreed and understood that the client would be responsible for the attorney’s compensation, in one or more of the following ways;

(a) ____% of any sum recovered as a result of legal proceedings, initiated or terminated by the attorney in question.

(b) ____% of any sum recovered as a result of negotiations that lead to a settlement, irrespective of when it occurs. This includes and extends, but is not limited to pretrial, as well as final settlements. 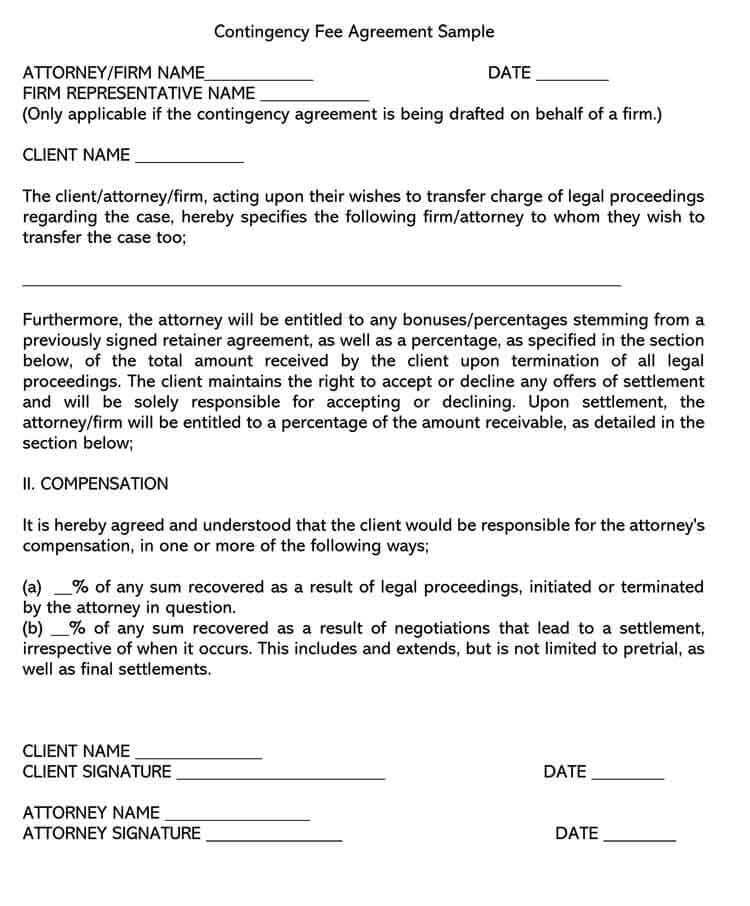 Why do Lawyers Take on Contingency Cases?

This largely depends on the lawyer themselves. Some lawyers, such as pro-bono lawyers, wish to assist and help those who cannot afford legal representation. As a result, they are comfortable with leveraging their services with contingency agreements. Other lawyers, such as those representing large businesses, may find it more profitable to take a percentage of a settlement than their hourly rate.

Do Contingency Fees Include Case-Related Expenses?

Technically speaking, no. Practically, however, no money is paid to the lawyer until the client actually receives their settlement and/or damage claims. As a result, the lawyer is paid a flat, percentage-based fee off of the amount received, which may be used to cover any previous, case-related expense.

What is The Average Contingency Fee for an Attorney?

This largely depends on the type of case in question, as well as the client themselves. The percentage can vary from as low as 10% (which is common in the case of large settlements that involve corporations and/or businesses) to as high as 40%, which is typically the number when lawyers represent clients who cannot afford to pay their hourly rate.