‘Non-compete’ means an agreement, provision, or clause which bars parties to the agreement from competing against each other.

What is the “Employee Non-Compete Agreement?”

An employee non-compete agreement is a contract which a company enters into with its employees. It obligates the employees to keep all the secrets they have learned within the said company during their periods of employment. The contract also prevents the employee from sharing the same secrets with a third-party firm.

Why employers use a non-compete agreement?

First and foremost, companies need this agreement to maintain the competitive edge the secrets accord to them. They do not want those secrets to be spilled over to every other person who might use them against their advantage.

For most companies, it is their trade secrets that keep them operational. Any disclosure of this information may mean death to the companies themselves. They thus keep this information secret to preserve their own existence.

Closely related to their existence is the issue of market share. In case the trade secrets are spilled over, they might result in the manufacture of the said goods with other firms which might eat into their own market share.

Finally, companies also want to ensure that their revenue is not interfered with in whichever shape or form. That is why they see to it that their secrets remain intact and are not spilled out unnecessarily. Other might pick those secrets and make use of them.

This is a clause which bars an existing employee from spilling the beans about the trade secrets he accrues during his tenure in the organization. This agreement is mutual in that it is signed and bound by both parties to the agreement. The same penalties befall either party should they default.

Lasting power refers to the time interval that the agreement is in force. In many cases, it starts immediately the employee starts working with the company. At sometimes though, it may commence when the contract finally expires.

Jurisdiction is a detail of the scope of the agreement. These include such aspects as the area where the company is based, its market share, or the periods of time when the agreement might come in handy. It frees the employee to reveal those secrets outside the stated bounds.

To be able to draft an award-winning non-compete agreement, you definitely need to follow the right format. For this, a template will definitely come in handy. It contains the structures which a letter of this kind has to follow to be able to yield the necessary outcomes. Be sure to find and use one for the best outcomes. 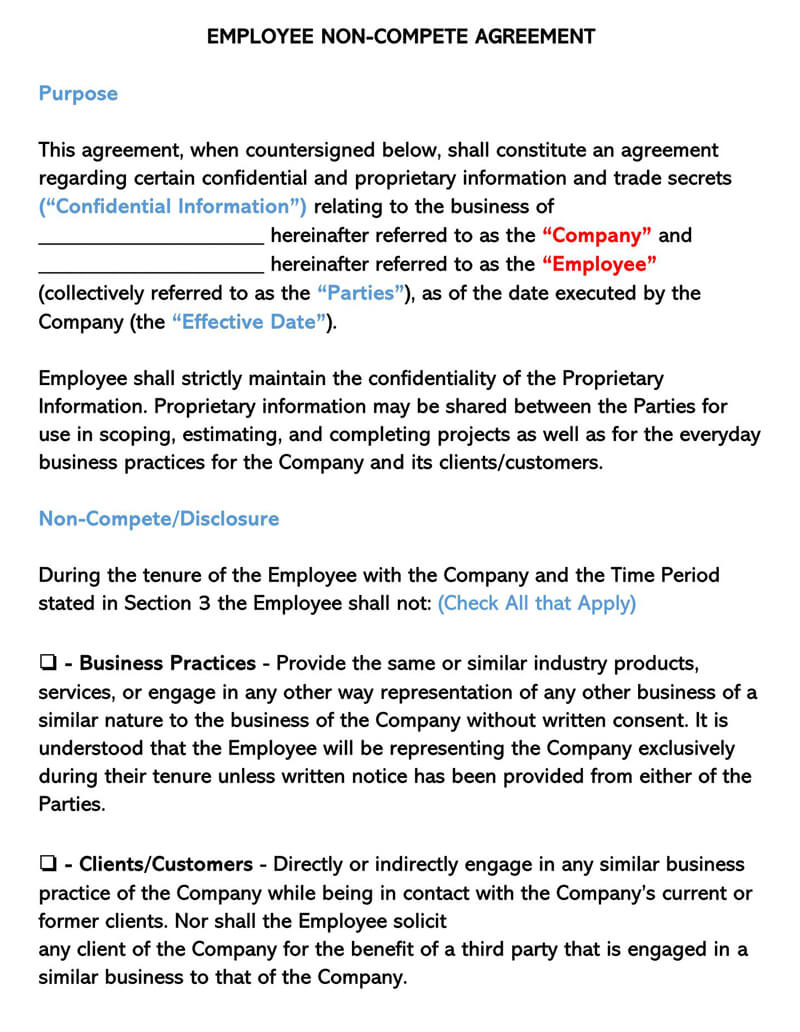 What to include in the “Employee Non-Compete Agreement”?

How to write a “Non-Compete Agreement”?

Step I: Study your competitors

Start off by studying your competitors. These are persons and business entities that may pose a direct threat to your own business. While at this, consider the geographical boundaries, nature of goods you deal in, and any possible conflict of interest that might arise in the process.

Move on now to draft the agreement. This forms the core of the entire process as it spells out the terms and conditions that the employee has to adhere to. Be sure to make the language simple enough for your employees to understand well.

Step III: Submit the agreement to a legal professional for review

You definitely want to do everything within the confines of the law. That is why it is a good idea to submit the agreement to a legal professional for review. Let him point out any issues which are in conflict with the laws of the land and how to harmonize them.

Step IV: Present the agreement to your employee

Having made sure that the agreement is up to standards, you now want to present it to your employee. Give home ample time to read through and understand the finer details.  Thereafter, let him append his signature as a sign of agreement. This is the time to ask for any input or concerns on his part.

Last but not least, sign and date the agreement. Remember, it is the date indicated that marks that start of the enforcement of the agreement. Be sure to choose one which truly reflects the time when the agreement was initiated.

How enforceable is a non-compete agreement?

In many states, the agreement is only enforceable in court if it supplements another enforceable contract. Its enforceability hence varies from state to state and is highly subjective.

Do non-competes hold up in court?

The scope of such agreements varies greatly from one company to another. Also, there are no hard-set limits that oversee such agreements. When such issues spill over to the courts, it is up to the judges to look into the sum total circumstances to evaluate the validity of the agreements altogether.

What is a standard description of a non-compete agreement?

A non-compete agreement is a contract which an employee gets into with an employer. In so doing, the employee promises not to spill any trade secrets which he shall gain from the company. He also commits not to enter into any form of competition with the employer at the conclusion of the employment contract.

Does a non-compete agreement need to be notarized?

At the moment, no common law or statutory requirement exists which demands that this agreement be notarized. If it has to be enforceable, it must be signed by the party against whom the enforcement is applicable.

In what states are non-compete agreements banned?

Oklahoma, North Dakota, Montana, and California ban this agreement at least in part.

Are an NDA and a non-compete agreement the same?

NO, they are not! They bear some slight differences. The non-disclosure agreements (NDA) mainly govern privileged information. The non-compete agreements, on the other hand, goes beyond to cover how such information might be used later.