An escrow holdback agreement is a common practice in the field of real estate, particularly between a buyer and a seller. Essentially, it works as a sort of insurance policy between buyers and sellers. When a seller offers to sell property along with improvements that he promises to make but is unable to make said improvements for a variety of reasons, an escrow holdback is when the buyer’s money is set aside or “held back” until the seller fulfills his part of the agreement. In other words, it is money that is held back until the seller satisfies his end of the bargain. This includes things like fixing parts of a property, completing maintenance, renovation, and the like. In the Real Estate sector, general practices suggest that a third party, which is typically a company, bank, or moneylender, hold on to this money until both parties have satisfied their terms. These parties are legally referred to as escrow agents and are usually advised to allow for more transparency and fairness in such transactions. To formalize such an agreement, an Escrow Holdback agreement is required to legally oblige all parties to said agreement.

When Will You Need an Escrow Holdback Agreement?

Escrow holdback agreements may prove necessary in a number of different situations. Typically, these are agreed upon before sale, particularly when the seller is required to finish, repair, or add to the property(s). As a result, an escrow holdback agreement generally sees the buyer set aside a certain amount of money to cover those costs. This amount is typically higher than the total costs needed for renovation or repair, in the case that the expenses end up exceeding the decided-upon amount. Additionally, holdback agreements typically include clauses that oblige the seller to address all of the requisites within a reasonable time frame.

These are some common situations in which the need for an Escrow holdback agreement arises. That being said, real estate is a fairly flexible field, and it is common practice for buyers and sellers to work out unique agreements that best suit and serve both their situations.

There are a number of steps that should be adhered to in drafting an escrow holdback agreement. It is a good idea to consult with a lawyer and use a template or an existing agreement as a sample of sorts, then fill it in with specifics that pertain to your situation. Typically, an escrow holdback agreement is attached as an addendum to an existing contract or sale deed, and so an important clause that buyers will need to include.

Once you have a template or a sample agreement to work with, the first thing you’ll want to do is establish the party(s) subject to the agreement. Using the legal names of the buyer(s) and the seller(s), along with the date of the agreement, declare the purpose of the addendum and refer to the original sale agreement with its date. Additionally, make sure to add the legal name of the escrow agent at the end of the declaration of purpose.

Once the declaration section has been drafted, the buyer will need to outline all of the obligations and responsibilities that the seller will need to fulfill, as well as list the monetary amount that will need to be allotted for the requisite work. The amount should be specified both in words, as well as numerically.

After the buyer’s obligations are outlined, the agreement will need to explicitly list the responsibilities of the escrow agents. Typically, real estate agents, money lenders, and banks fulfill this role and take a commissionary fee for overseeing the exchange. Once again, this amount is agreed upon in advance and should be listed, both in words as well as numerically.

Finally, the addendum will require the signatures of all of the parties involved. This means that the buyer, seller, and the escrow agent will all have to provide their signatures. Make sure that the signatures are dated to legally signify the time upon which the agreement was established.

Once these criteria are met, the addendum is ready to be added to the sale agreement. To help you out, we’ve attached a sample agreement that can be used as a template to draft an escrow holdback agreement.

I. Parties bound to the addendum

II. Seller(s)’ role and obligations to the buyer(s)

IV. Duties, Responsibilities, and Obligations of the Escrow Agent

This section explicitly expresses that, in the case that there is a discrepancy between the terms of the sale agreement and those of this addendum, the terms of this addendum are to take priority. The buyer(s) and the seller(s) agree that the Escrow agent <_____> (Escrow agent’s name) will not be culpable for any losses or damages that may be incurred in the performance of its obligations, apart from losses and damages that arise from negligence, malpractice and defaulting on the end of the Escrow agent. Additionally, the Escrow Agent will be entitled to a fee of <_____> (Escrow Agent fees). All fees may be withheld and paid prior to any legal proceedings. Additionally, the Escrow agent will not be held liable for any legal or functional costs that arise from the obligations outlined in section II. 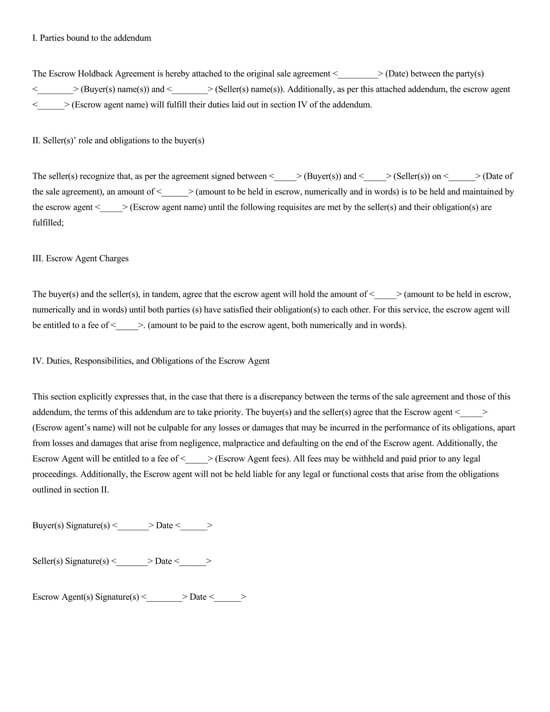