Video Release Forms (Free Samples) | US | How to Make One

There are instances when a production company will need this video release form, primarily if the films are being produced for commercial use. Some of the situations include when they are capturing footage of:

The form categorically states that the person who applies for that permission has been granted it. He is, therefore, free to use those images for the purposes spelled out. In case of any disputes or need for litigation, the form may come in to aid in reaching favorable verdicts.

Further, the form also showcases the full duration in which the permission is valid and the terms of references that govern the same. It hence dispels any ambiguities which are ordinarily bound to arise in the course of the use of the video.

This form finds applicability in many areas and fields. Below are the main places which this form may be applicable:

The form is used extensively by academic institutions. In this sense, it is used to inculcate some teachings to the students via the video formats. These could take the form of video shows, projectors, and vivid illustrations.

Though applicable for all courses, history, journalism, and current affairs courses are the key beneficiaries of this kind of approach.

Documentaries are films and videos which confer practical and factual reports with regards to a particular subject matter. For instance, it may exhibit some historical facts about an ancient empire.

Alternatively, it could also speak about a particularly hot topic like globalization, terrorism, or poverty. In most cases, it is the media houses that seek such kinds of permissions.

As hinted above, the media houses are some of the key beneficiaries of this video release form. That is because they display content, mostly in video formats, to their audiences.

It is unlikely that they may be able to shoot and capture all the facts they have on their own. That is why they may from time to time have to seek the intervention of other content producers.

In the process of recording a movie, the producers will often have to incorporate some foreign content into their recording. The same reason for the media house also applies in this instance.

It may not always be that the producer has all the facts, footage, and raw materials necessary for the full production of a movie. That is why they have to incorporate foreign but relevant content.

When making up some news stories, the producers of the news item may also have to bring in some foreign yet relevant content. In this instant, the foreign content may serve to reinforce the existing narrative in ways which is beyond the scope of the news crew.

The video release form also comes in handy while making videos that are strictly intended for the internet or online platforms. Most videos of these kinds are sourced from the video-sharing giant, YouTube. With regard to this, the video plays more or less the same role it would under normal circumstances.

Lastly, the form may also be used to seek permission while preparing for presentations. These presentations are employed heavily in university lecture halls to deliver talks and speeches. They serve to visualize the concepts and thus making them more understandable.

Name of the parties

The essential information that should be in the form includes:

Here are free downloadable templates that can be customized as per needs: 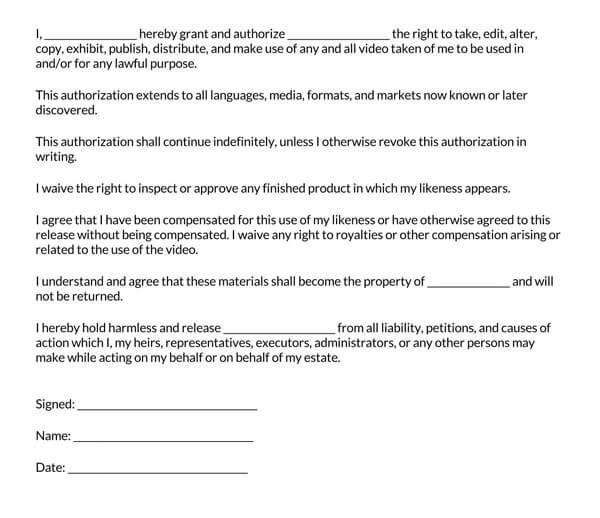 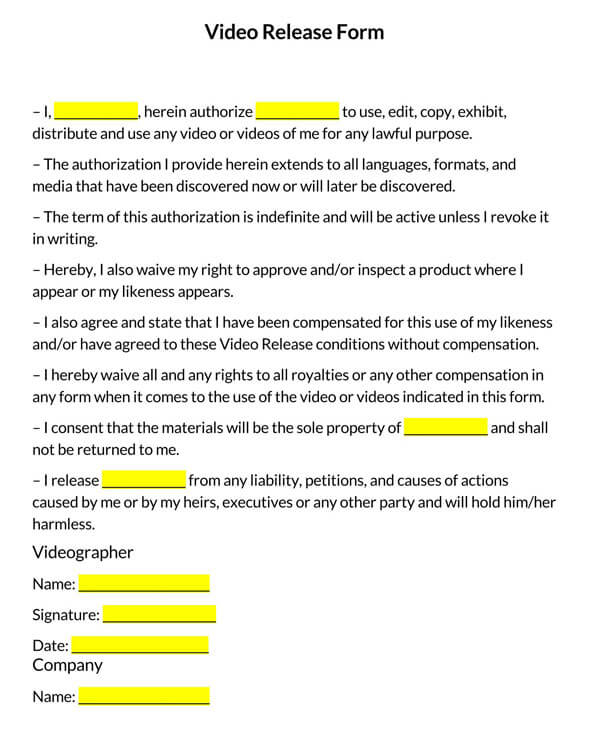 How to Get Video Release Permission

There is a process involved in requesting permission from the client to use the video and the video contents that a person or production company should be aware of. Here is how to get a video released:

A production company must research the privacy laws that govern the use of someone else’s video footage. For instance, one example of these laws is that if a production company is using a video, they should ensure all subjects in the video have signed the release forms.

With this in place, their videos will not be banned from shelves or the internet. However, the production company will also learn the limits of using a release form. For example, they will know if a video release form also covers images included or if they will need another type of release form for that.

After understanding the laws surrounding the video release, the next step is to download and fill the form by having it signed by the client to obtain permission. The form should include clear information relating to the client, such as their name, address, and contact information.

Note: A production company dealing with a minor subject must obtain their parent’s or guardian’s signature in the release form.

Do you need a video release form for YouTube videos?

Yes, there is a need for one to get a video release form for YouTube videos. Without a written and a signed release form, the subjects in the YouTube videos can file lawsuits for using their images and footage in a published video without permission.

When don’t you require a video release form?