An unsecured promissory note is a simple agreement where the borrower doesn’t have protection against the loan borrowed.

Following are a few things to know about unsecured promissory notes:

On the other hand, a secured promissory note must have collateral in place. The collateral will stand in as a security for the borrowed amount and can be used to settle the pending loan if the borrower defaults on their payment. Various items can be used as collateral. These include car logbooks, property assets, financial assets, and other equitable assets. The secured promissory notes use such collateral as a degree of assurance of loan repayment. As such, they can protect their investments whenever they are in such transactions.

As a lender, knowing your borrower is very important when giving out unsecured promissory Notes. While it enables you to charge a higher repayment rate, other components play a critical role in the note. Knowing these components puts you in a better position to lower risks associated with lending money without security. These components include:

Repayment type is a component that will make you understand how your money will be paid back. Generally, there are various types of repayments that you would consider. It’s up to you to select the most convenient one. These repayment types include installments, interest-only payments, and lump sum.

As much as it’s an unsecured note, it doesn’t mean that the borrower can default payment at will. Because if they do, they will face inevitable consequences. therefore, the following are some fees that the borrower can be subjected to pay if they miss to make payments as per the agreement:

Interest fee- before enforcing this fee, the borrower will be given 15 days to make repayments. Failure to do so, the lender will charge interest on the due amount.

Late fee- these are fees that allow the lender to set the borrower a date to make payment after they have missed the first deadline. If the borrower still fails to honor the second deadline, they will be charged for late payment.

Before you put your signatures, you must agree. Reread through the document to ensure everything is in order. This includes counterchecking if the principal sum is correct. Then, you can proceed and add the signatures of both the borrower, lender, and two witnesses.

Writing an unsecured promissory note is not tricky. Once you have enough information at hand, the whole process is easy and fast. But if you are fining some challenges, the following steps will help you through:

The first step of writing an unsecured promissory note is starting at the basics. Here is some useful information to start with:

After downloading the document and including the above-stated information, you to work on the finances. The following are some essential things to consider: Select the most agreeable payment method.

Signatures help in making the document legally binding. Therefore, the unsecured promissory note document will require two witnesses and their respective signatures. The following are crucial information to be included before appending signature:

Here are some free customizable Unsecured Promissory Note templates that you can download as per your need. 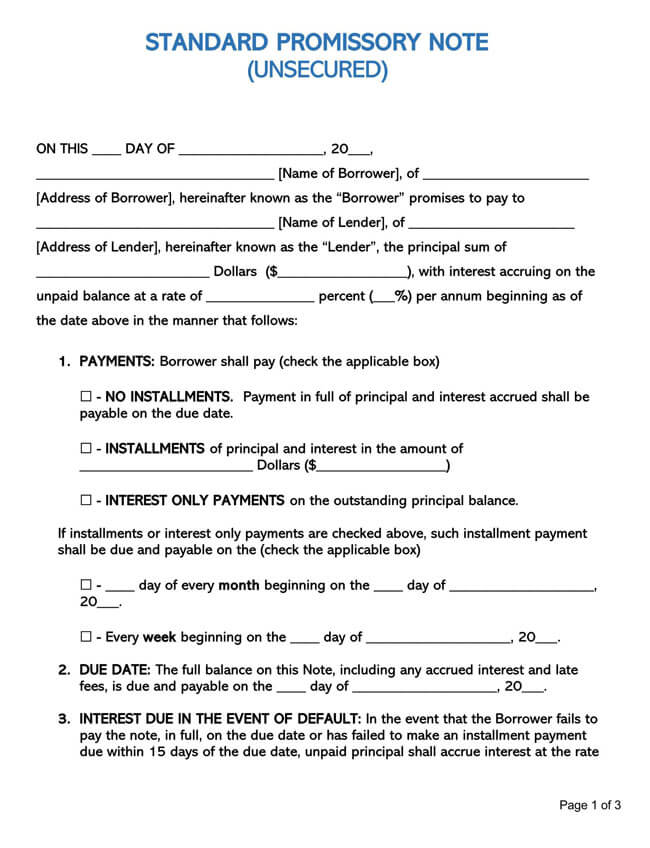 Can I enforce an unsecured promissory note?

What happens if a promissory note is not paid?

When the lender is lending money through an unsecured Promissory Note, both the parties and witnesses put their signature on the document. This alone acts as a legal binder. Therefore, if the borrower fails to pay the unsecured promissory note, he or she can be held liable through a court of law.