A non-compete agreement is a binding contract that prevents an ex-employee or contractor from competing with the former employer upon exiting the company. It imposes such a restriction within a specified duration of time.

What is an independent contractor?

An independent contractor is an individual or corporate entity which performs some tasks to another company or individual on a freelance basis. This is to mean that he is not employed on affixed term but is nevertheless privy to some details and inner secrets.

The exact tasks the contractor does vary significantly from field to field. In all though, they bid for contracts and then perform the same within the specified timelines. While at it, they also assemble the relevant workforce not to mention estimating the amount of money needful in the process.

Reasons for employers use a non-compete agreement

First and foremost, employers want to minimize competition from their employees after they depart their companies. They want to prevent any possibilities of the ex-employee starting a company which may later pose some threat or rivalry to it.

Protect a Client Base

As stated above, each company has a client base that it appeals to. It does not want to lose this base at all as it is the one that guarantees a steady flow of income.

All the efforts of any organization are ultimately geared towards generating revenue. It is hence in the best interest of any company to do whatever it can to guarantee the revenue inflow. By preventing its employees from starting similar firms, to goes a long way in ensuring this.

Lastly, each company will want to preserve its secrets. To do this, it has to impose a caveat on anyone who might use its own secrets to its disadvantages. Remember, secrets are the lifeblood of any organization.

What to include in an “Independent Contractor Non-Compete Agreement”?

This refers to the total duration of time that the agreement is in force. This one may range from 6 months to roughly 2 years. By law, employers are prohibited from imposing permanent or unnecessarily long duration of the agreement.

The scope is the exact activities or work-related tasks that the contract prohibits the employee from undertaking upon the termination of the contract. Further, the document goes on to prevent any further ambiguities which might arise when the clause is implemented. Then it also aids the employee in distinguishing between the do’s and don’ts to prevent getting in trouble.

Many companies have a geographical niche which they draw their client and much of their revenue from. The contract yet again spells out the extent to which the employee may not set up base after quitting their company. This parameter is expressed in radius and denoted in miles.

In the event that the terms of this document are violated, some compensation will have to be sourced. Yet again, the document states exactly how much will have to be paid. It goes beyond to even outline the method to be used to settle those dues.

Competition If the contract prohibits an ex-employee from working with specific competitors, it has to also state precisely the kind of business that is more likely to compete with the parent company.  This is necessary to avoid any doubt and clear out any ambiguities. 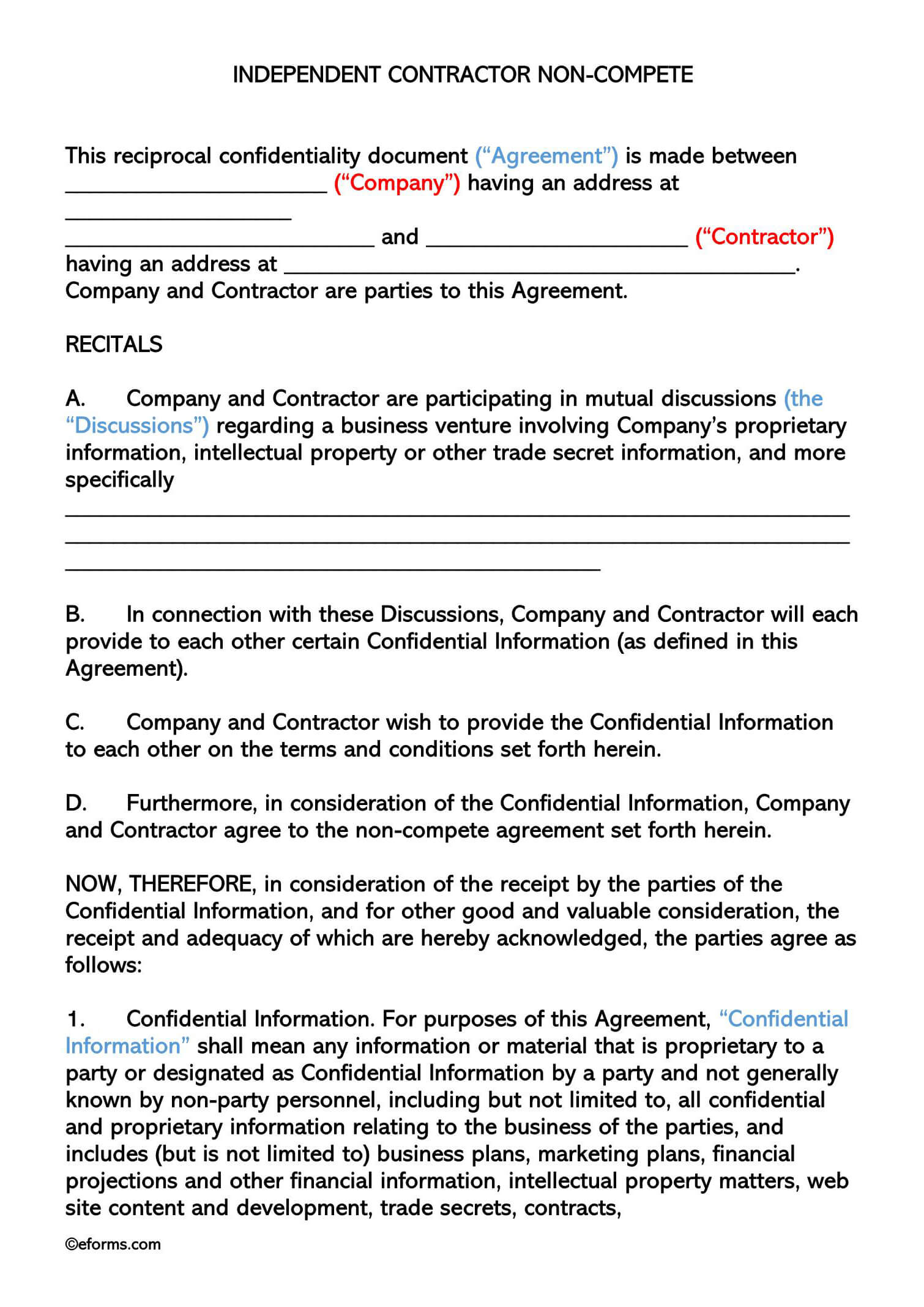 When to use a non-compete agreement?

These forms are used by different organizations for different purposes. Below are some of the common grounds which justify the use of this form:

Many new products feature unique workmanship and makeup. The last thing a company wants to do is expose the secrets to the would-be competitors. That is why a shrewd employer will want to expressly prohibit an employee from sharing such secrets with the wider public.

While entering a new market, an employer wants to exercise great caution not to spill his secrets. Remember he wants to play his cards close to his chest to prevent the existing business people from hindering his subsequent progress.

Whenever a company is fighting off fierce competition, it wants to make every attempt not to shoot itself in the foot. There is no better way to guarantee this save for keeping all company secrets confidential. This can only happen if a company signs an agreement of this kind.

Some tasks require that the contractor be granted access to privileged information. While this is inevitable, the decision ought not to disparage or compromise the company’s own existence and operations. That is why it makes sense for employers to sign such an agreement.