Military lease clause addendums typically deal with tenants who are also actively enlisted in any department of defense and/or the armed forces. Such tenants may be subject to deployment in other parts of the country and/or the world, and so may need to move frequently. As a result, a military lease clause addendum allows tenants enlisted in the armed forces to terminate their contract prematurely, although they will be required to provide a notice in writing to their landlord. This must be done in advance (the timeframe is typically stated in the addendum) so that the landlord has sufficient time to find a replacement tenant. If such an addendum is not present in the rental agreement, tenants are likely to find it difficult and/or expensive to break a lease, irrespective of whether they are members of the armed forces or not. As a result, it is highly recommended to include such a clause in the rental agreement, especially for active, on-duty members of the armed forces. 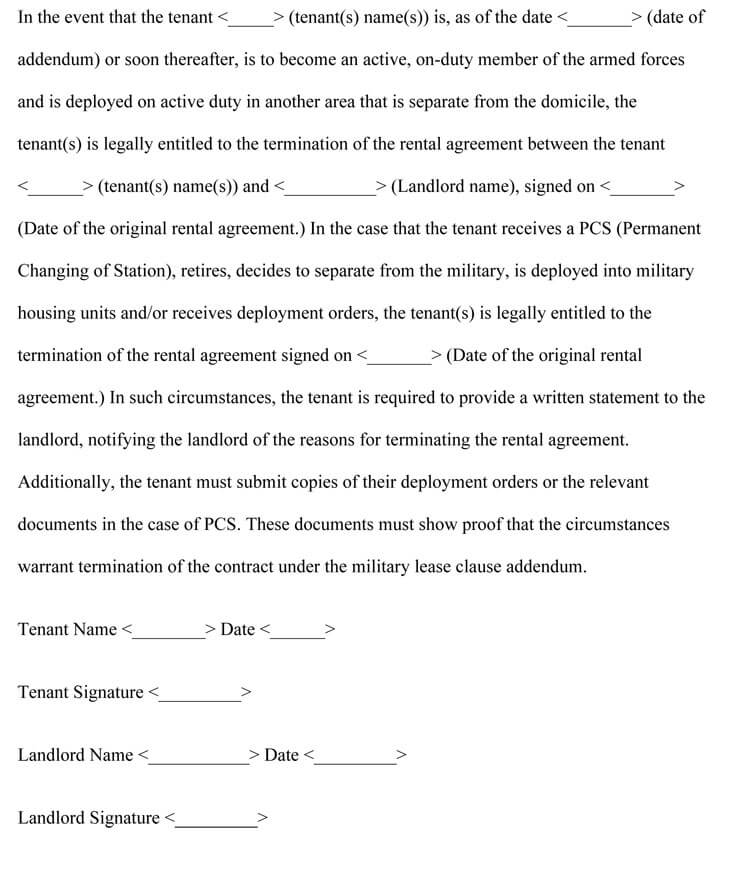 Can you terminate a rental agreement if you are an active-duty military member?

Yes, but only under certain circumstances. If you are actively on-duty and are ordered to relocate by the military, you are legally entitled to ending the rental agreement with written notice in advance. This is only possible if there is a military lease clause addendum laden in the original rental agreement.

How early can you break a lease with military orders?

While this timeframe is negotiated between tenant(s) and landlords, the general convention dictates that a notice must be provided no later than 30 days before the tenant intends to move out.

Can a landlord verify military orders?

Typically, a military lease clause also obligates the tenant to provide documentation that warrants termination of the lease prematurely. This includes things like deployment letters, PCS letters, and/or proof that the tenant is moving due to circumstances that pertain to the armed forces.

Are there units that are only-military?

In some localities, yes. Although these aren’t particularly common, some landlords target a niche market and choose to rent to only active-duty servicemen or servicewomen.