Military time is not only used in the military but also by astronomers, hospitals, and emergency services. Using the military time comes in handy when a timing mistake could be dire and also eliminates the possibility of mixing up 5 A.M. and 5 P.M. when working across different time zones.

The 12-hour clock system, which divides the day into two-cycle, is widely used in countries where English is the main language; however, other countries have also embraced it too. The 12-hour clock has two equal periods of 12 hours, from midnight, which is denoted as 12:00 A.M. (Ante meridiem) to midday, denoted as 12:00 P.M. (post meridiem), then from midday back to midnight, which completed a full 24-hour cycle.

The numbering in a 12-hour clock runs from one to twelve in each period, with twelve representing zero as the start point.

The 24-hour clock system, on the other hand, originated from ancient Egypt and has been used for many centuries and is still being used today. The 24-hour clock, commonly referred to as the military time conversion, runs the day from midnight to midnight for a total period of 24 hours continuously.

Unlike the 12-hour clock, most people consider the 24-hour clock to be specific to timelines and is much easier to read and interpret.

How is the Military Time Written?

Here is a chart comparison of the hours throughout the day:

Steps to Understand Military Time (How to Tell)

This is perhaps the easiest part of learning how to tell the military time – you simply have to ensure that the time has four digits. To do that, add zero before the hour, and remove the colon (:) for single-digit hours. When you reach the two-digit hours, simply remove the colon.

To convert noon hours to military time, you simply add the number of hours passed since noon.

Reading whole hours without any minutes is easy. If it is a single-digit hour with zero as the first digit, you will have to read each digit separately.

To read hours with minutes in the military time, simply state the four-digit number as two pairs of numbers with tens and one’s digit.

For example, 1755 becomes “Seventeen Fifty-Five Hours” 0130 hours will be “Zero One Thirty Hours.”

Zulu is often used in the military and aviation as another name for Universal Coordinated Time- UTC. The Zulu Time Zone is also popularly used at sea between 7.0 degrees west and 7.5 degrees east.

Letter “Z” is normally used as a suffix when telling the time to denote a time being in the UTC, such as 09:00Z or 0900Z, which is read out as “Zero Nine Hundred Zulu.

To convert standard time to military time, if the standard time is in the a.m., i.e., before 12 noon, simply remover the “am” consequently is the hour is a single digit, for example, 9, add a zero (0) before 9 to become 09. This is because the military time is a four-digit system, i.e., two digits for “hours” and two for the “minutes.” For instance, 9:00 A.M. becomes 0900 hours.

Why do We Use Military Time?

The military time format is used as it helps avoid confusion between the AM and the PM. We’ve all been in situations where we unintentionally set our alarm for 6:00 P.M. instead of 6:00 A.M. only to be late for school, work, or an important event. With the 24-hour time, there is no confusion as the numbers never repeat themselves. For instance, 0600 hours can only mean 6:00 A.M. because the military time does not have 6:00 P.M.

We understand that getting it right can not always be easy, especially if you are used to reading the 12-hour time format. With a military chart, it will be much easier for you to tell the difference. With practice, you will, with time, be able to read it just like the 12-hour time. Download and use out free military chart templates for your convenience. 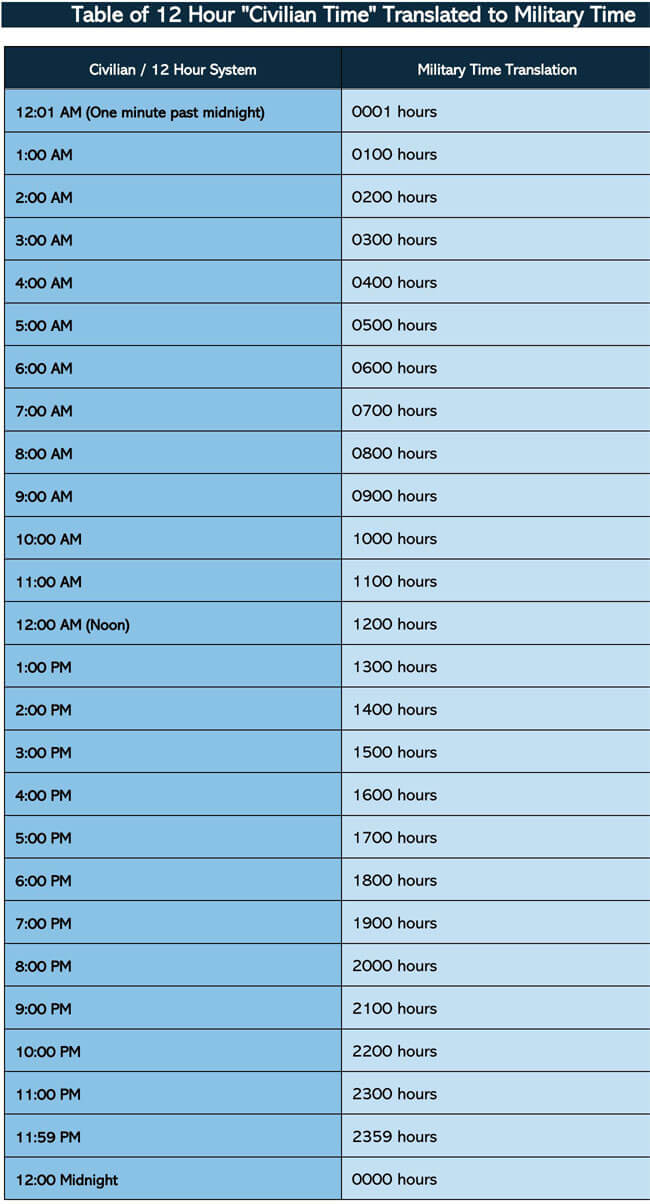 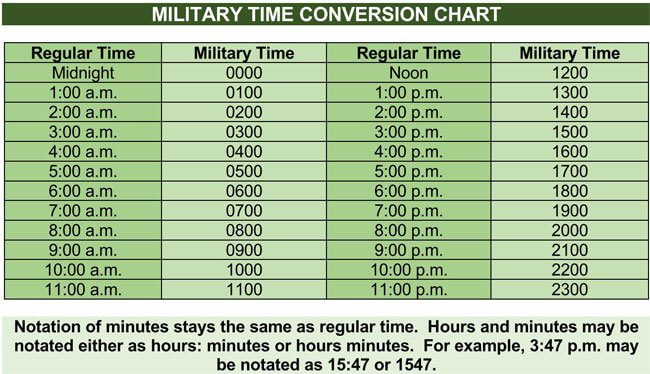 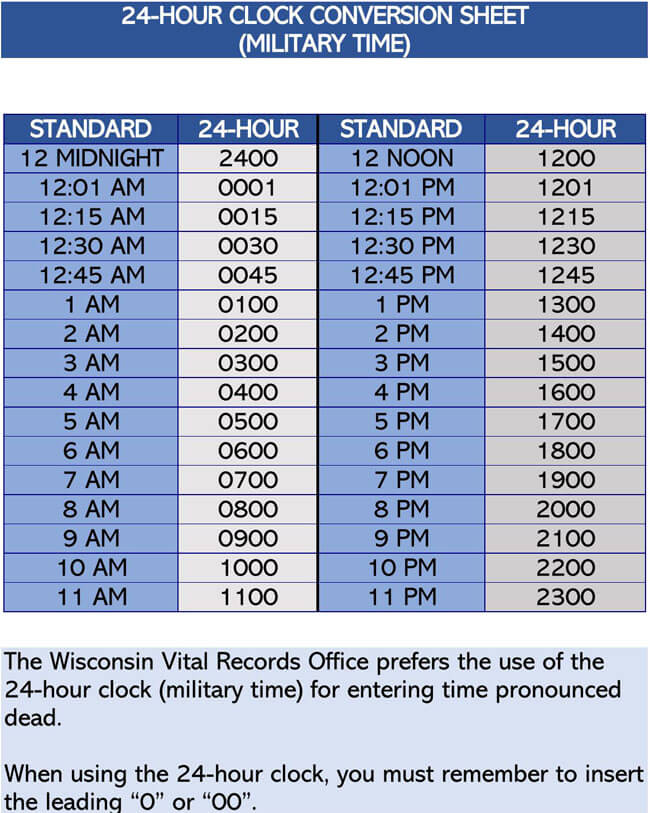 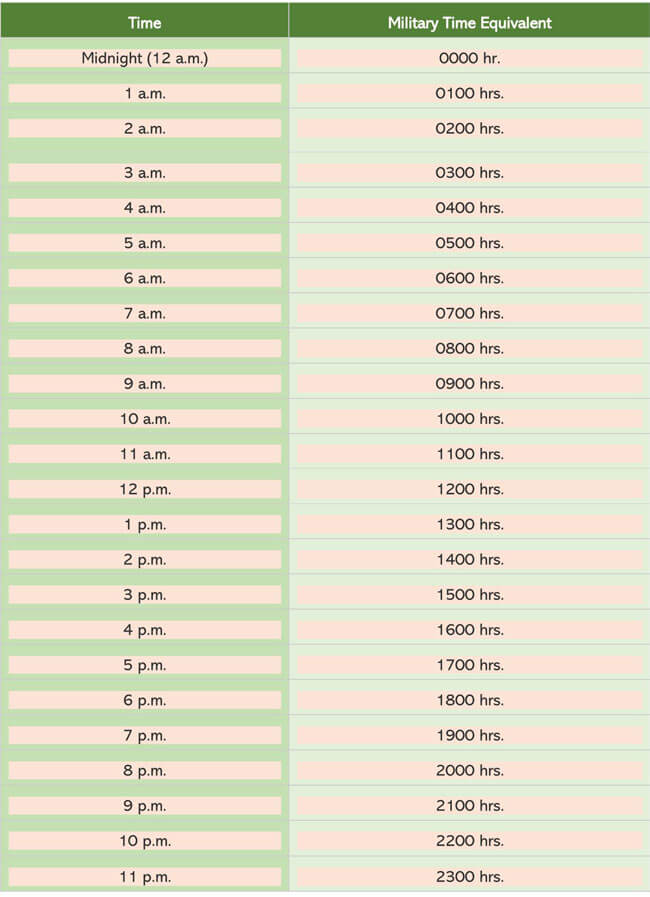 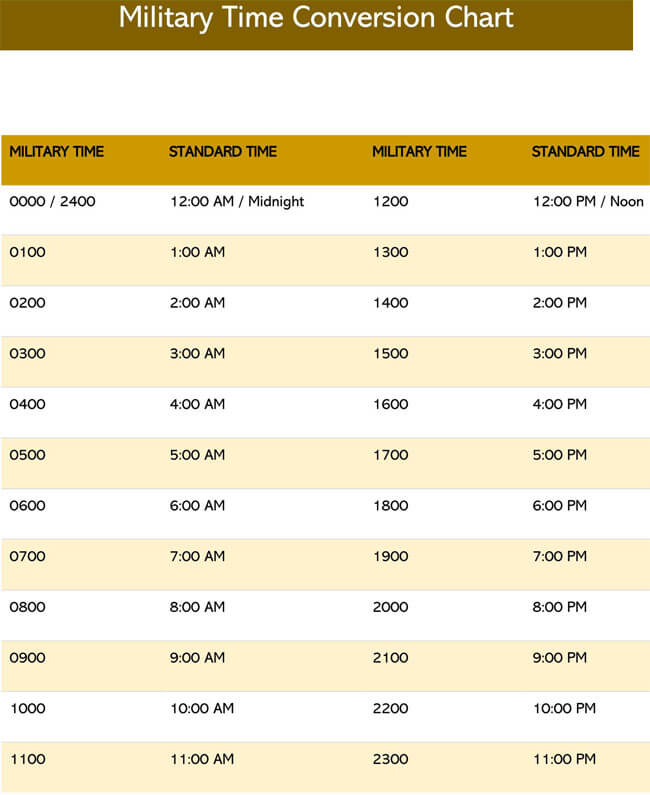 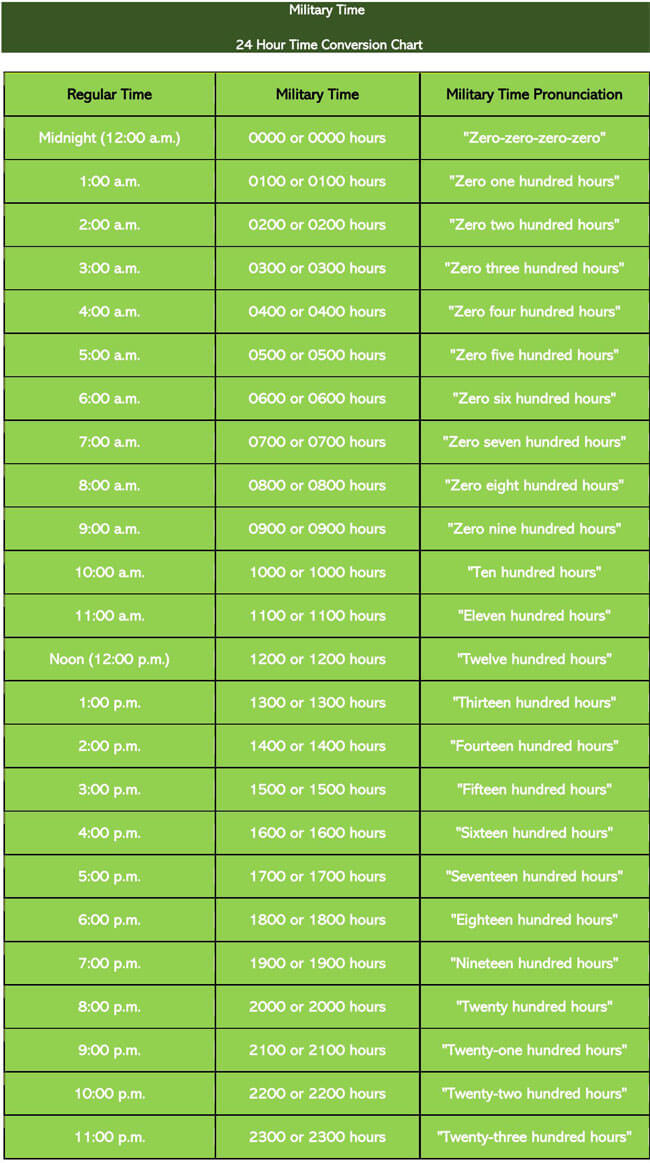 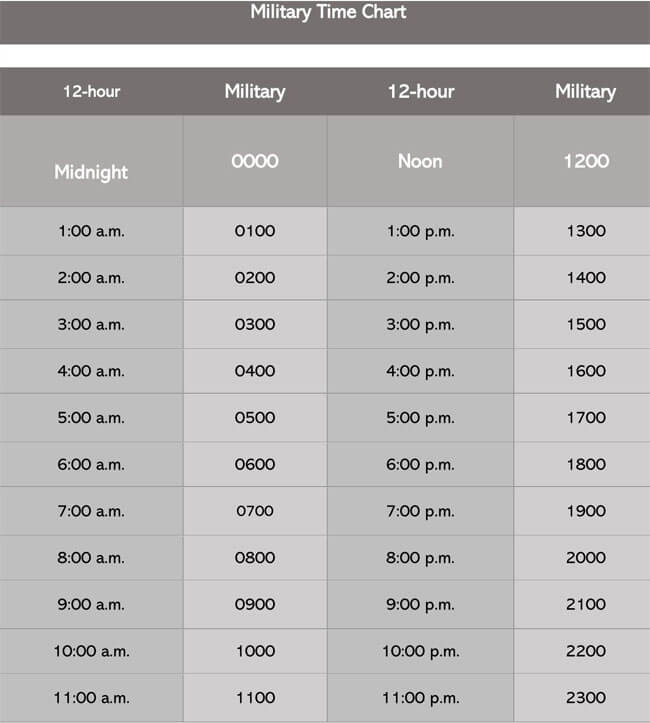 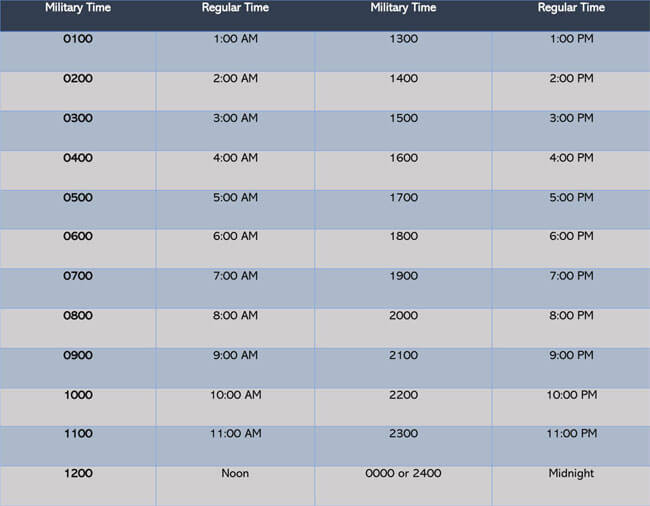 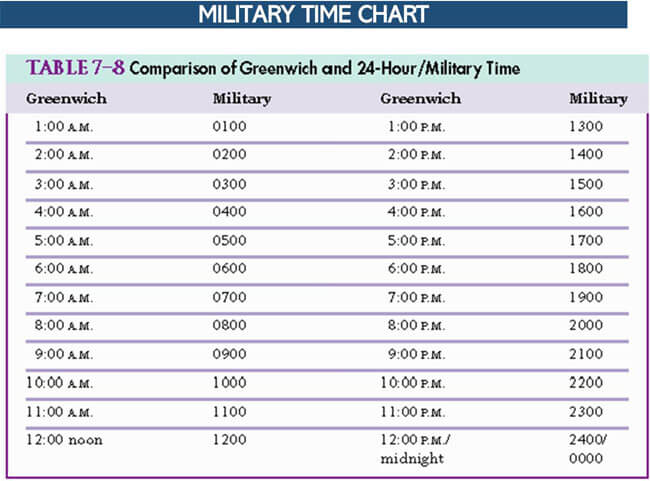 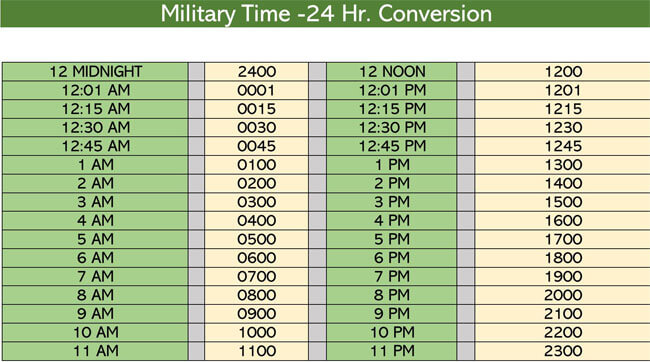 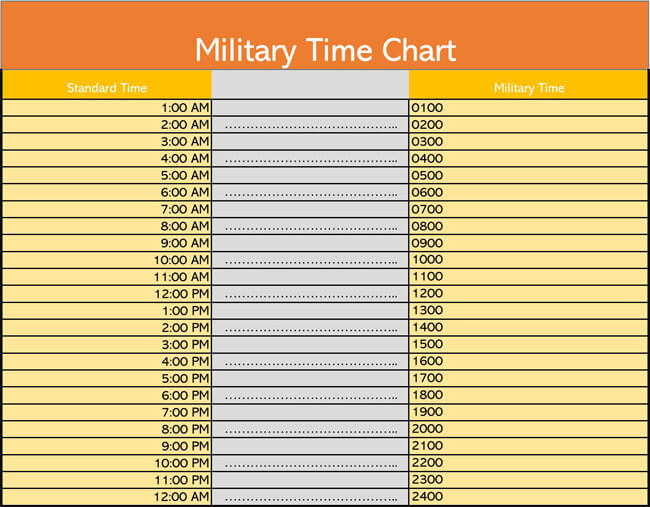 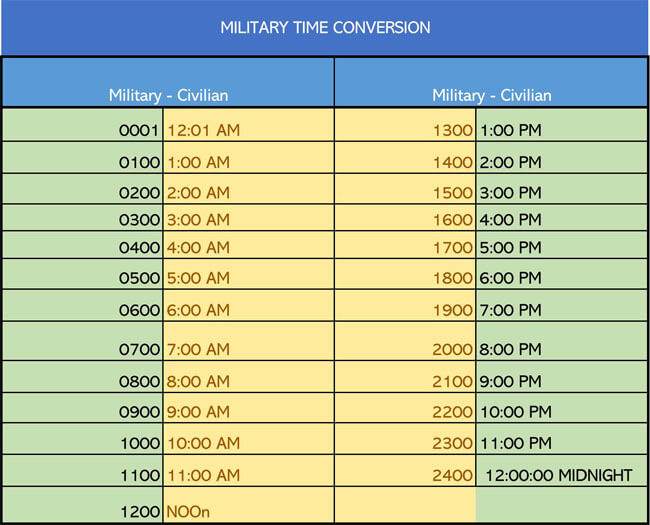 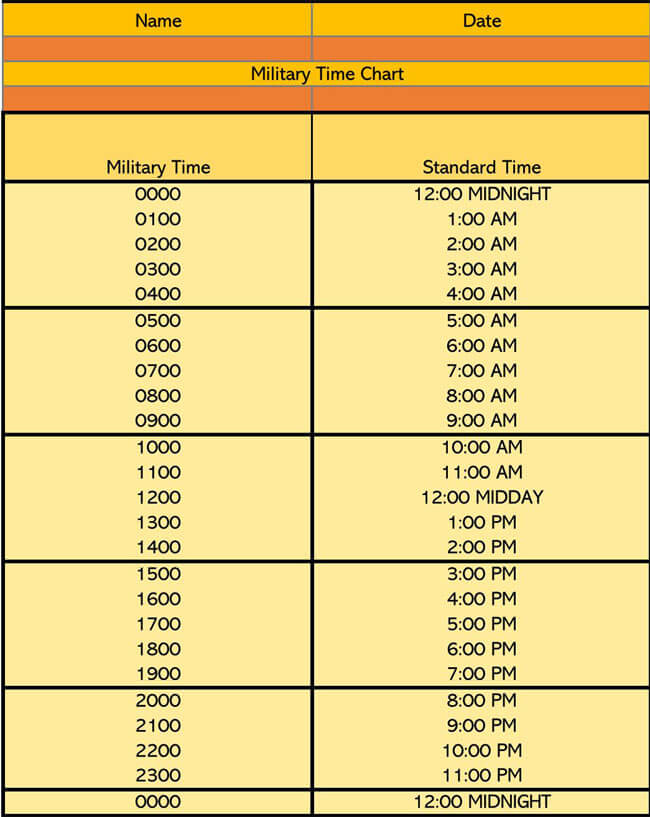 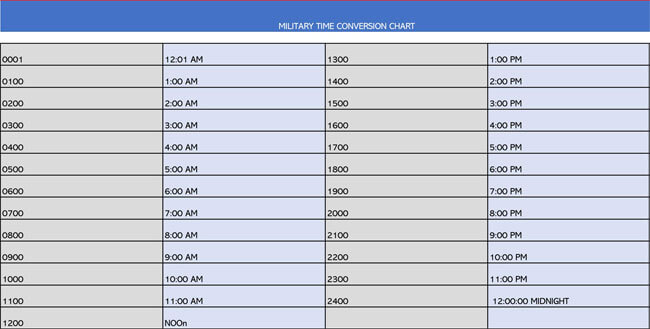 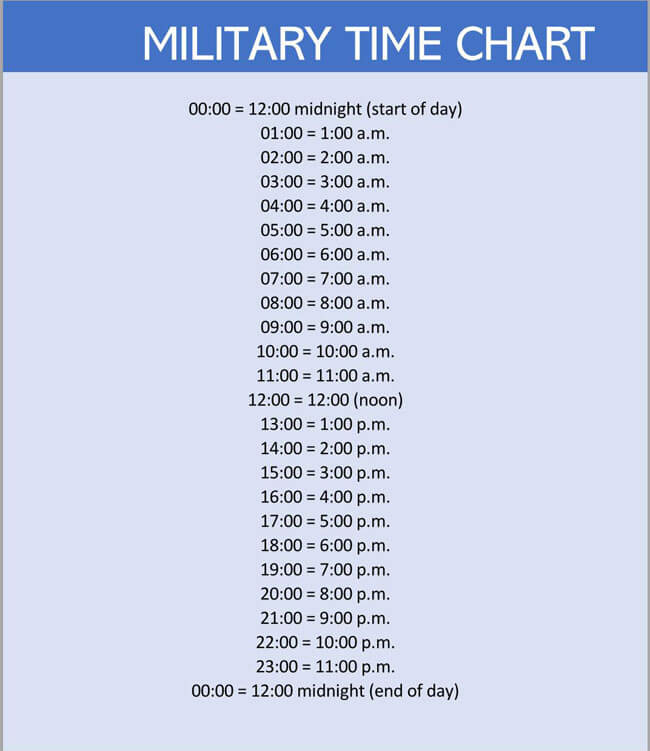 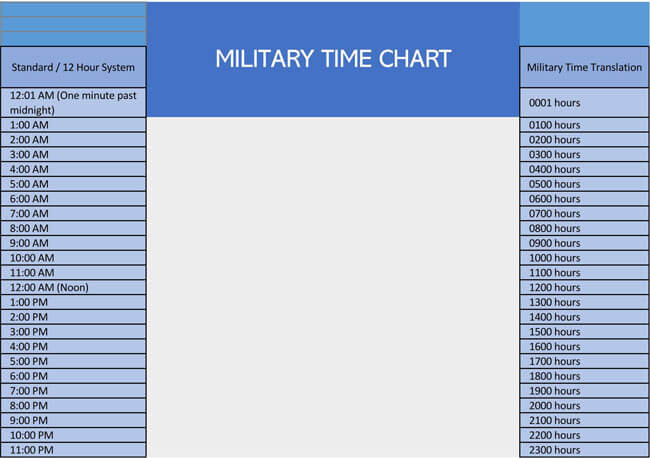 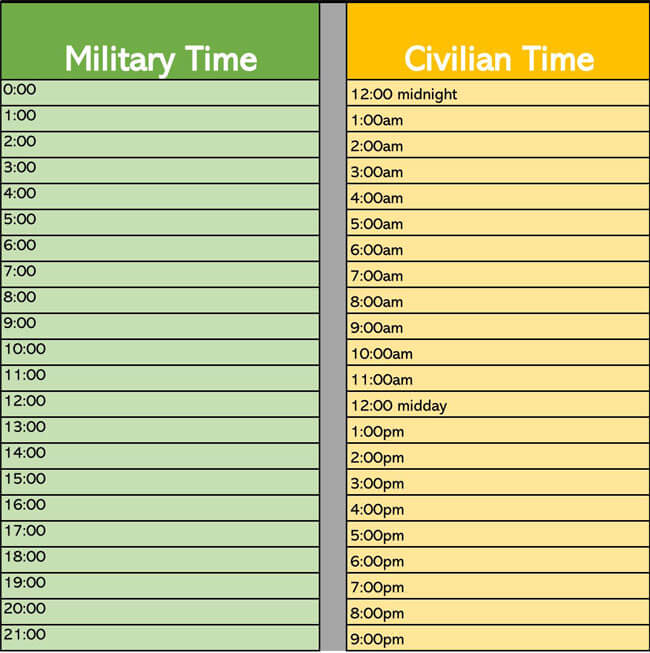 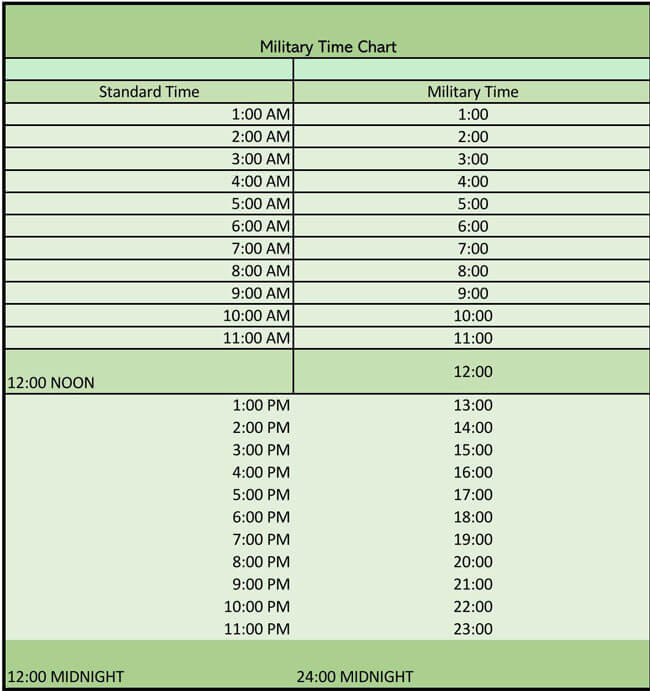 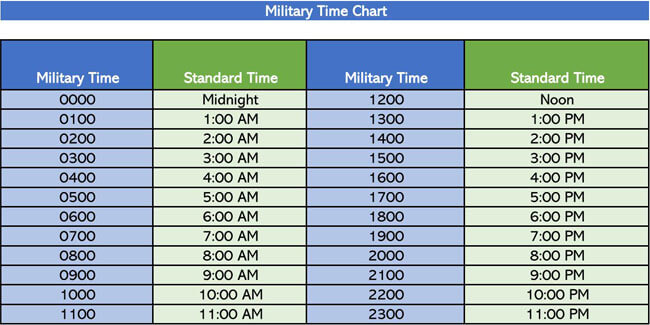 What is military time good for?

The main advantage of using military time is that the aspect of confusion is eliminated, and this is why most public transits, doctors, and the armed forces use the military time. Since the numbers are not repeating themselves like in the 12-hour System, one cannot be confused if they fail to mention p.m. or a.m. when reading the time.

How do you practice military time?

Practicing the military time is easy. Simply convert your phone’s time into the 24-hour format and download a chart to help you tell the time. With practice, you will, with time, be able to tell it much easier.

How do I quickly tell military time?

Hopefully, all the questions you may have had on telling military time have been answered by now, and now you know the difference between the 12-hour time and the military time. Although telling the military time may not be easy, especially for the afternoon hours, with practice, you will see that it is not hard at all. Remember to download and use our military time charts to help you out.