How to Start and End an Apology Letter? (24 Perfect Examples)

You screwed up. Is there a nicer way to say this? Maybe. Are there meaner ways to say this? Most definitely. But the fact of the matter is You. Screwed. Up. Now you have to do the adult thing and take responsibility for your actions, and apologize. Many people prefer a face-to-face apology. However, sometimes this can’t be done. Maybe you are afraid you’ll fluster your words, perhaps say something in anger and just make the situation worse. Maybe this was such a colossal screw up it affected a large number of people. Maybe the person you offended was so offended they relocated to get away from you. An apology letter might not fix everything, but it is a start in the right direction.

This could be a physical document, i.e., a piece of paper with writing, or an e-mail. Either way, it acknowledges the mistake, expresses regret, and respectfully asks for forgiveness or at least patience. Ideally, it would also express an attempt to make restitution if possible. It is important in a workplace environment because it is physical proof that you own their mistakes and try to make up for them.

Why is Writing an Apology Letter so Hard?

You might think that admitting to a mistake makes you a bad person. Actually, it’s a lack of empathy that makes someone a bad person. If you can empathize with someone you’ve hurt without getting defensive, you show them that one mistake does not reflect on who you are as a person. While apologizing can lead to more accusations, not apologizing can lead to resentment. You can’t control how someone feels, but you can at least try for what would be less toxic on the whole.

How to Start an Apology Letter

Following are the steps for starting an apology letter:

Right off the bat, accept responsibility for what it is you did. Point out what you did and why it made them upset. Be sincere and humble while showing empathy.

You need to say the words “I am sorry”. Express regret the consequences. Don’t shift blame or give excuses.

“I am truly sorry for not paying more attention to what I attached to my e-mail. I feel terrible that you were exposed to graphic descriptions of furry bondage when you were counting on me to supply the figures needed to plan next year’s budget.”

You can give an explanation, but not an excuse. Still acknowledge there was a wrong, and you intend to right it. This shows that you will back up your words with actions.

“I should not keep my work documents and my online hobby documents in the same file on my computer. I will keep them in separate files from now on. Please find the appropriate documentation attached to this message.”

Admit you were wrong

Humbly admit that this was your failing. You may politely request forgiveness on the understanding that you are owed nothing. Realize that the matter is not resolved until your relationship with the receiver is amended.

“The mistake was mine entirely. I should be more attentive.”

How to End an Apology Letter

Below are the guidelines on how to end an apology letter:

Propose something that can fix the problem you caused or at least appease the injured party. This may require some thought.

“I will be more attentive in the future. I am planning on getting a work computer so I can keep it separate from my ventures. For now, I apologize to you and anyone else I may have hurt.”

Make this a polite request. The injured party is under no obligation to forgive, but it’s nice to be asked.

“I humbly ask your forgiveness, Father. I understand fully how you were made upset by this matter, but I hope we can still work together in the future.”

I am very sorry for (whatever it is you did). I understand that this resulted in (acknowledge the results of your actions). I truly regret this, and I am very sorry for any (hurt/ inconvenience/ embarrassment, etc.) this has caused. I accept full responsibility and hope you may forgive me. Rest assured, this behavior will not be repeated. For now, I propose to (describe a plan to rectify the situation.) Thank you for your time and consideration.

Apology letter from a drug addict

An apology letter as a drug addict can be a great way to express remorse for your actions while under the influence of drugs. The letter can be started by giving a brief overview of what has happened and expressing your deep regret by taking full responsibility of your actions. Also, genuinely request forgiveness and say how you plan to repair any damage that might have been caused due to your addiction.

Apology letter for a car accident

An apology letter for a car accident can be sent to the person whose property has been damaged or injured by you during the accident. First, you must give a fair and accurate account of what happened. Next, say you are sorry and show that you are willing to take responsibility for the accident and apologize for any inconvenience or distress that the person might have experienced. Ensure that you do not give false excuses or blame someone else in the apology letter. You can also include other repair costs, such as medical bills and property damage

An apology letter for a business can be sent as a step toward settling a dispute that may have arisen from your business. In this letter, you can say how you plan to resolve the problem, such as making restitution for damages, or how you are sorry for any losses or inconveniences that might have resulted from your actions. Also, express how you plan to avoid making the same mistake in the future. You can also include the date on which you will be able to address the problem.

Apology letter to a friend

An apology letter to a friend can be helpful in many different situations. In the letter, you can explain what you did wrong, take full responsibility for your actions, how sorry you are and how you plan to avoid making the same mistake in the future. You can also include information on what you plan to do to repair any damage that your actions may have caused and anything else that might help your friend understand you better and ultimately forgive you.

Apology letter to girlfriend or boyfriend

An apology letter to a girlfriend can be written for many different reasons, and therefore it is crucial to choose the tone and wording carefully. You should explain your actions in detail and not blame your girlfriend for doing something wrong, as this can cause an unnecessary argument. You should also include details to ensure that you do not repeat the same mistake and work on making things right again.

You can write a letter of apology for bad behavior to somebody who has been affected by your actions and is entitled to an apology. You must formally write the letter and give it to them face-to-face to show that you are sincere. You should start by explaining why you are sending the letter, i.e., apologizing for insulting someone or shouting at them in public, etc. Then, you can explain what happened and ask forgiveness in a genuine way.

Apology letter for the mistake

An apology letter for a mistake can be written to anybody who has been affected by your actions or mistakes in some way. You must express your regret and explain why the mistake was made to show your sincerity. You should also make sure that you express how you will put measures to ensure that the same problem does not happen again in the future. You can also include any further steps that need to be taken as a result of your mistake such as paying for the damage.

A letter of apology to a customer can be sent for several reasons, such as canceling an order that they’ve made, missing a shipment or delivery, and so forth. You must explain why you have done that and how sorry you are for any inconvenience it has caused. Finally, ask for forgiveness and explain how you will pay for any costs arising from the error.

Your teacher or your child's teacher? Either way, teachers rarely receive apology letters but would likely very much appreciate one. Spelling and grammar will definitely count here. 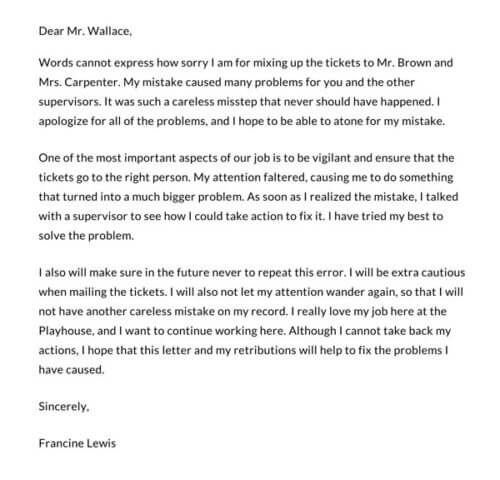 Apology Letter for a Mistake 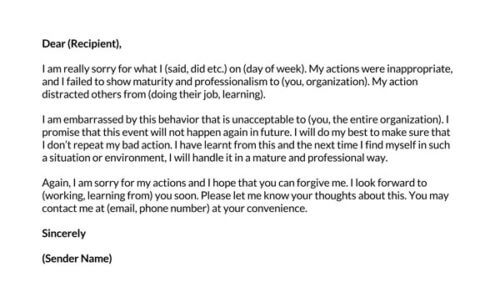 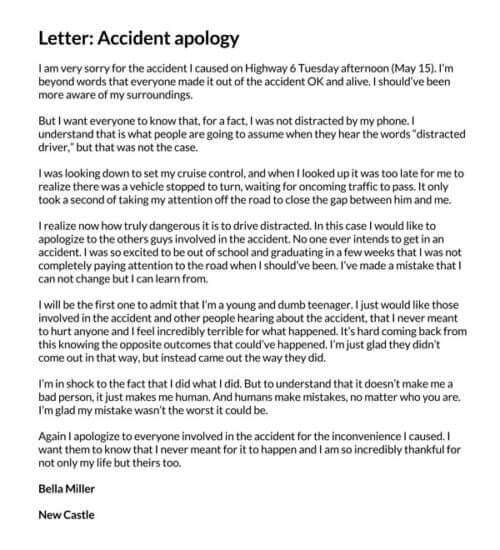 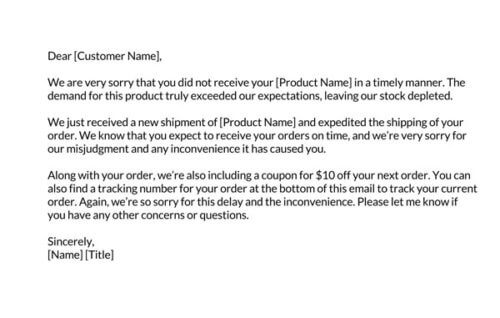 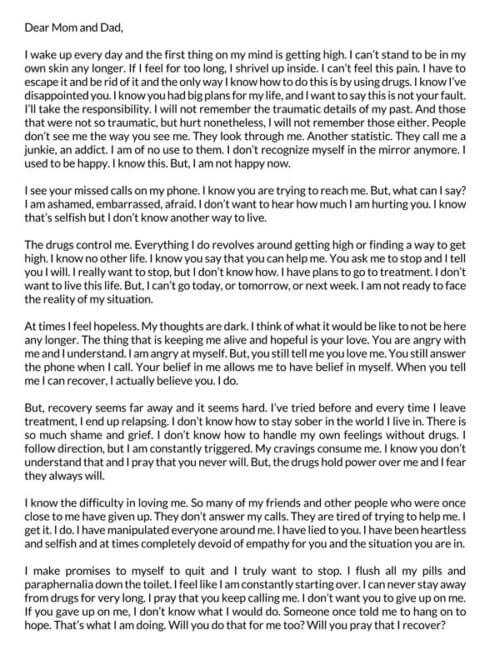 Apology Letter from a Drug Addict 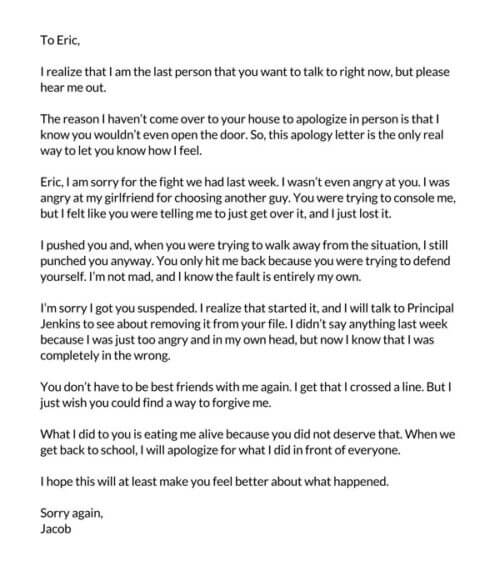 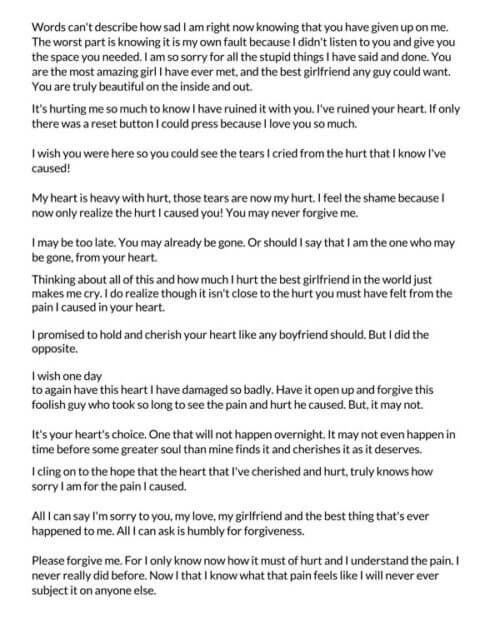 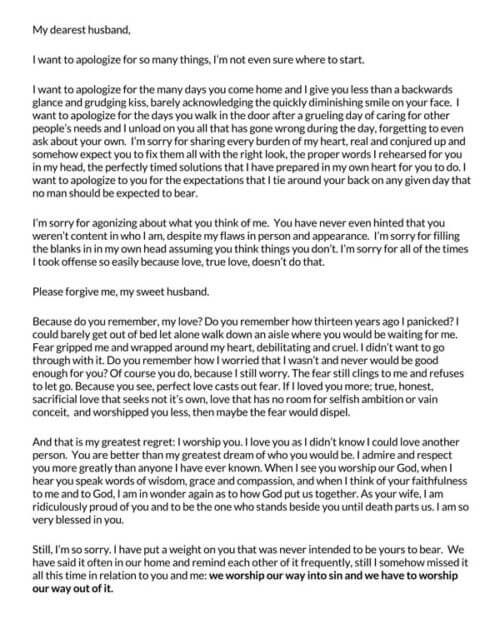 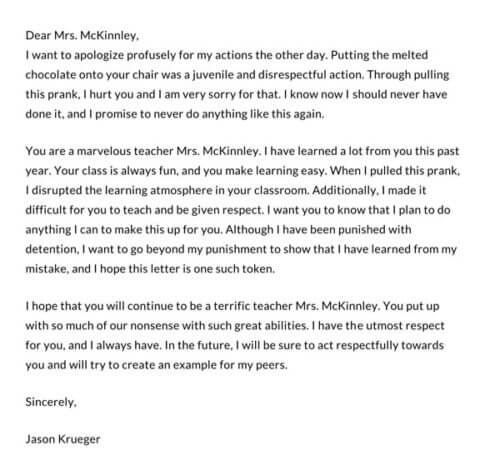 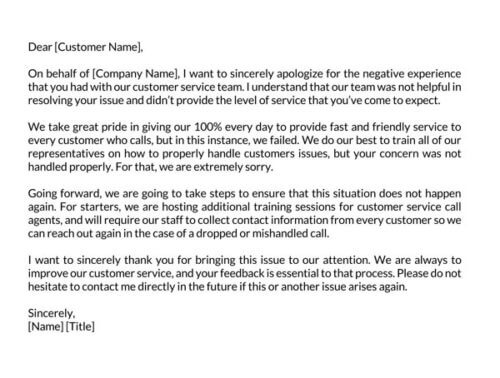 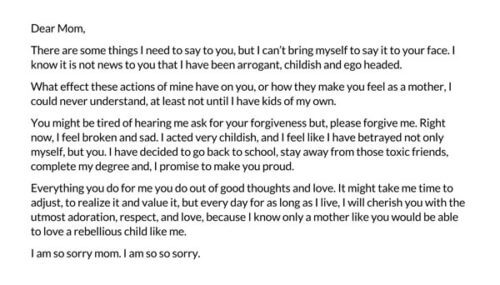 Tips for Writing an Apology Letter

Following are some tips for writing an apology letter:

A well-written apology letter can clear the air and make it known that this was but an aberration of who you truly are. It expresses that you accept your fallibility and wish to make amends to anyone you’ve hurt.

Apologies are never easy, but they are often necessary. It means taking responsibility for what you’ve done and facing the consequences of your actions.  It can be unpleasant, but it is part of being a civilized adult.