The Waterfall Chart is an amazing visualization tool that can show changes in value over a specific period. It was initially used in the financial space, but it has expanded to other industries to track and present performance.

But that’s not all,

You will also have your questions and concerns about the waterfall chart answered.

What is a Waterfall Chart

Some waterfall charts link the lines between the columns, making the chart resemble a bridge with other columns floating. These charts are particularly effective in revealing gradual changes in the quantitative value of something with time.

Some of the industries that use waterfall charts include:

The origin of waterfall charts

Waterfall charts came into the limelight towards the end of the 20th century, when McKinsey & Company, a strategic consulting firm, made presentations to clients. Later, Ethan M. Rasiel, a McKinsey associate, popularized them in the corporate space in his book The McKinsey Way. Over time, these charts have become more popular and have become an efficient presentation tool.

When are Waterfall Charts Used

Waterfall charts are a great data visualization tool that can be used for different purposes.

Here are some practical scenarios where waterfall charts are used:

As a data visualization tool, waterfall charts are increasingly important and can be used for different purposes.

Here are some of the benefits of waterfall charts:

Features of a Waterfall Chart

There are a few specific characteristics of waterfall charts that make them proper and complete.

There may be some slight difference in appearance, but these features are as follows:

If you move from a positive number like 500 to a negative value like -1500, the first number will be above the x-axis while the second one will be below the x-axis.

Creating a Waterfall Chart on Excel

But if you are using an Excel version older than 2016, here are some steps for building your chart:

You can create a table for the profit of your company for the year.

Then, input the values in the table. You’d discover that the values will be different for each month.

After inputting the values, add three more columns to your Excel table to show the movement of the columns on the waterfall chart. You can title them base, fall, and rise with columns B, C, and D, respectively. The base column shows the beginning point for the fall and rise of the chart. Next, input every negative number from the Fall column’s sales flow and every positive number in the Rise column.

Remember to set the totals: Also, you can add a start and End row to give total values for the beginning and end of your sales year.

Add the formulas in the Table: Complete your table seamlessly by inserting formulas to the first cells of each column and drag them down the column afterward.

Select the first cell in the Rise column and input the following formula =IF(E4>0, E4,0)

Click on the insert column, go to the column’s icon, and select the stacked column. Voila! The stacked chart appears on the worksheet having the data you inputted, but we need to convert it to a waterfall chart.

To do that, you must:

Format the chart: You can make your waterfall chart more appealing with some formatting.

Add a more professional look to the waterfall chart by removing most of the white space between columns.

You can do that by:

Now, you have read through the process of creating waterfall charts, but they look a bit difficult. And you have an upcoming presentation which needs this chart. So, you wonder, “What’s the way out?”

So, if you have an upcoming presentation requiring the use of waterfall charts and are clueless on how to create them on excel, you can click here to download your free templates: 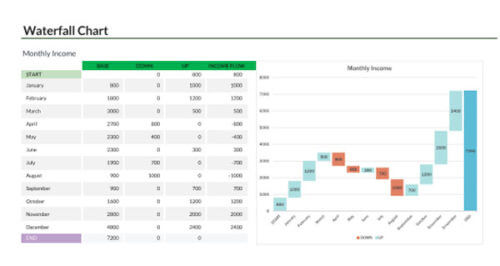 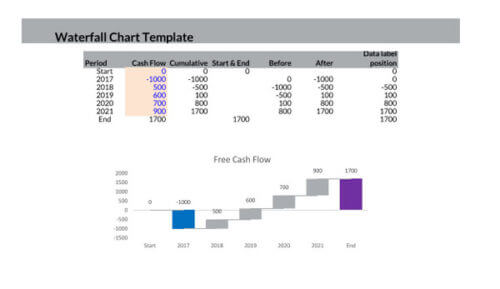 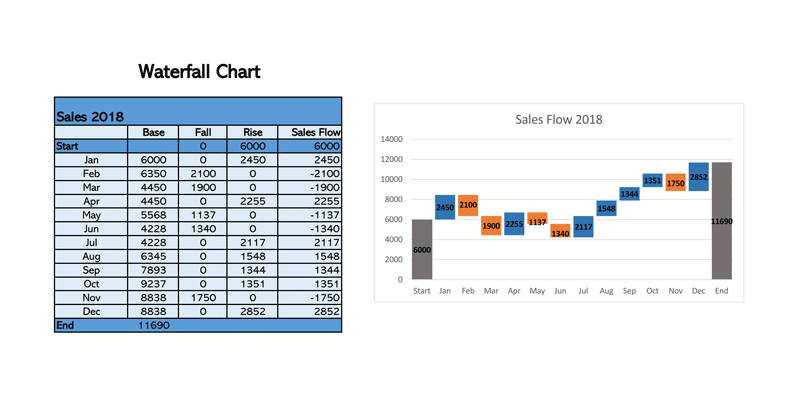 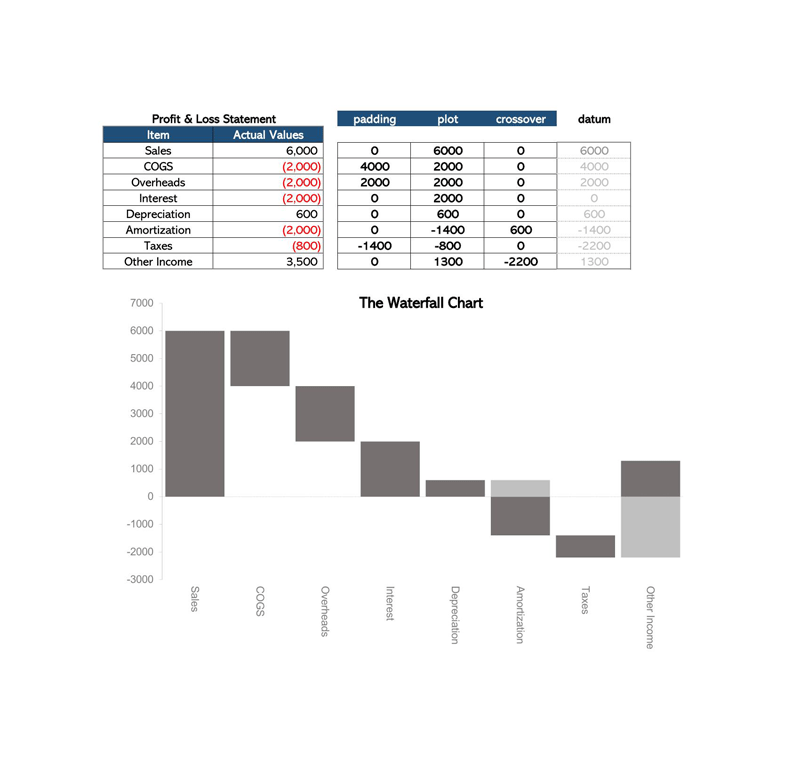 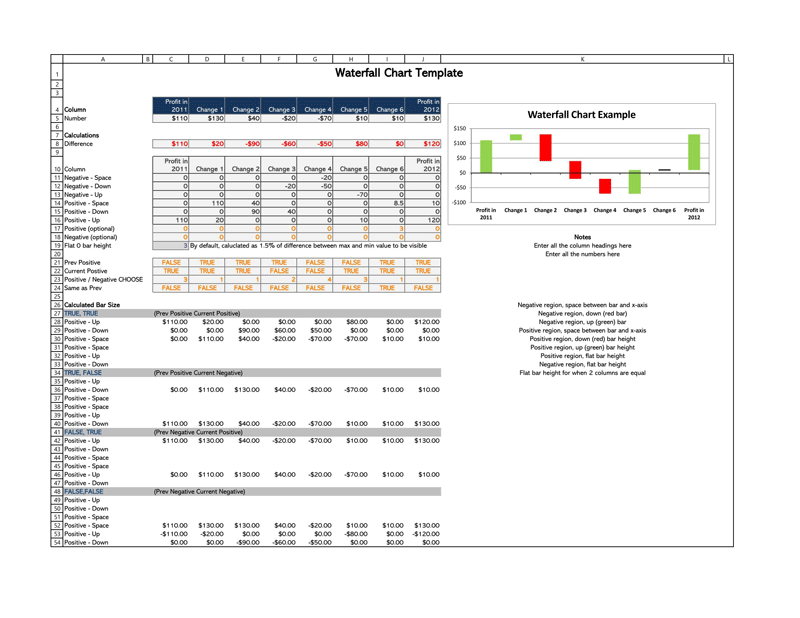 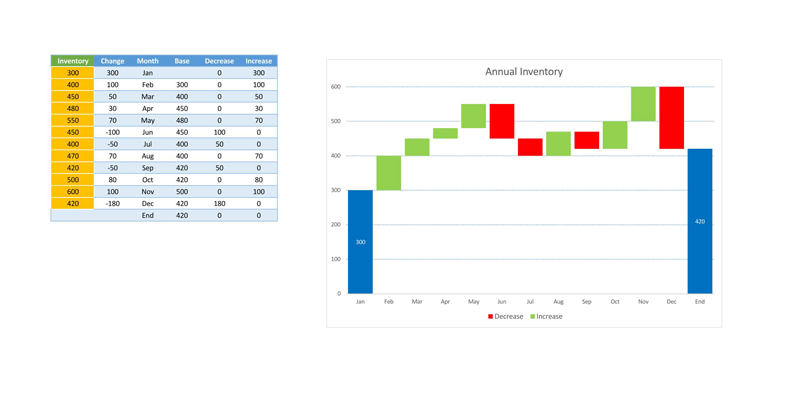 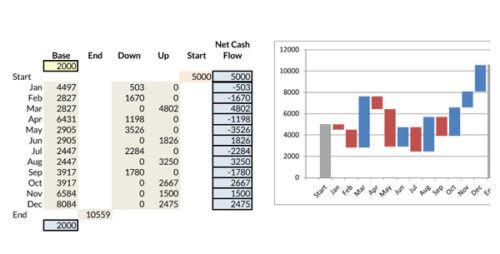 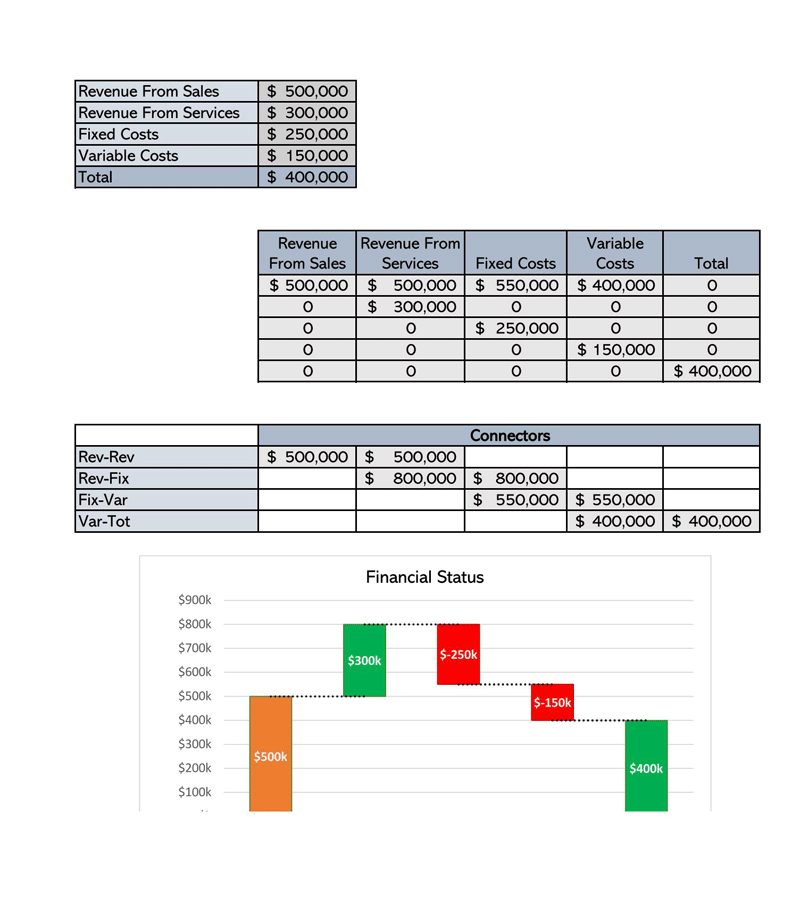 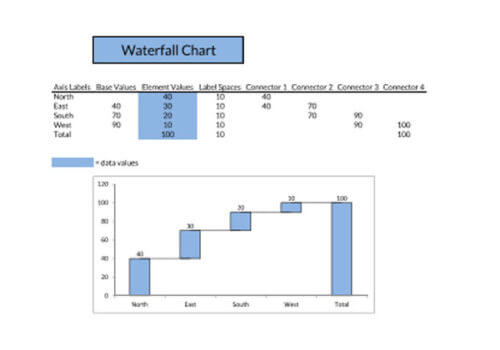 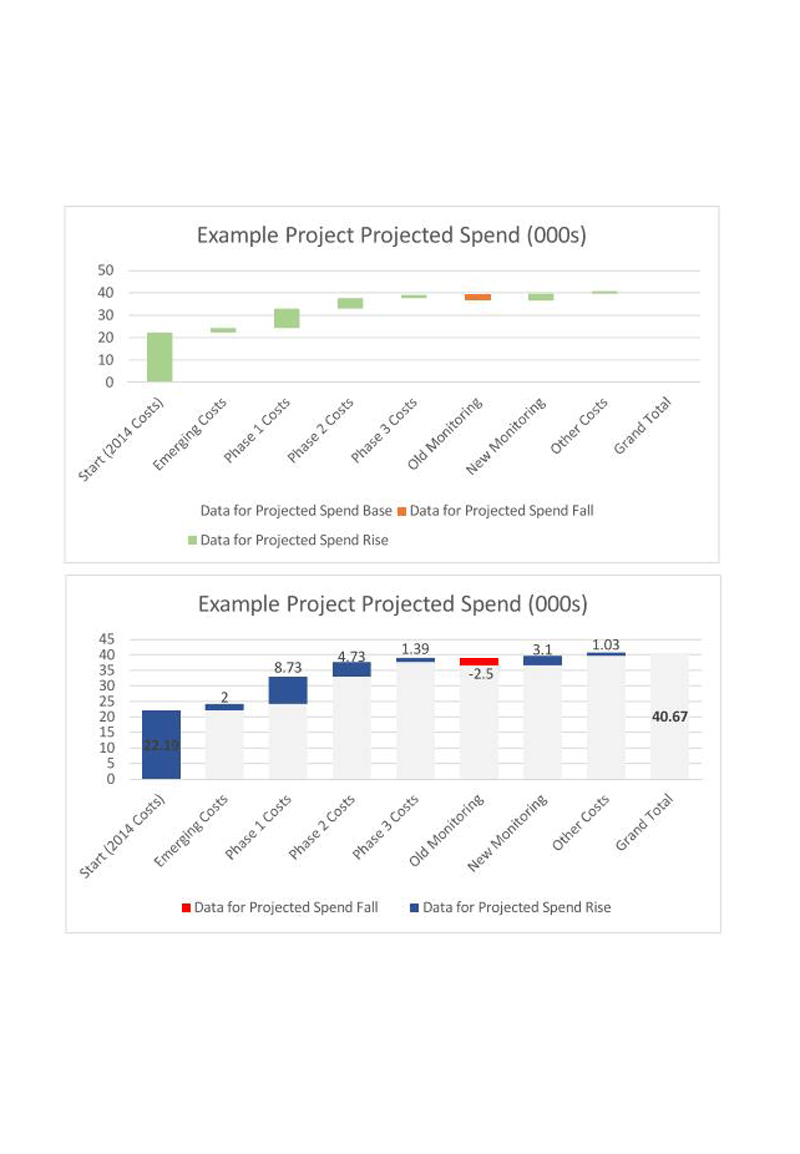 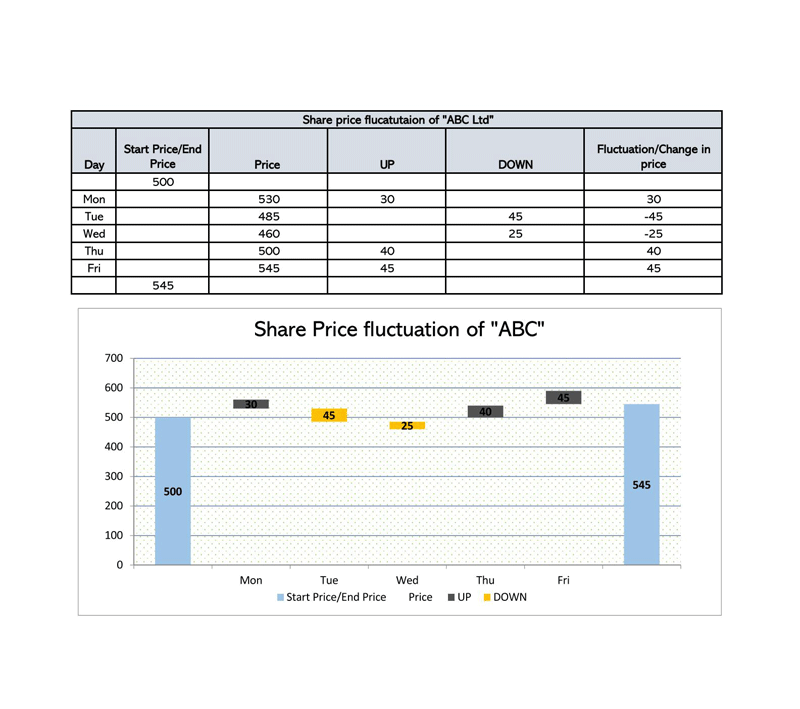 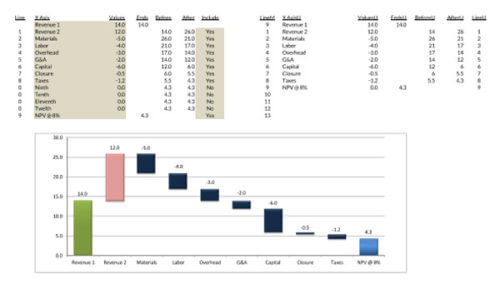 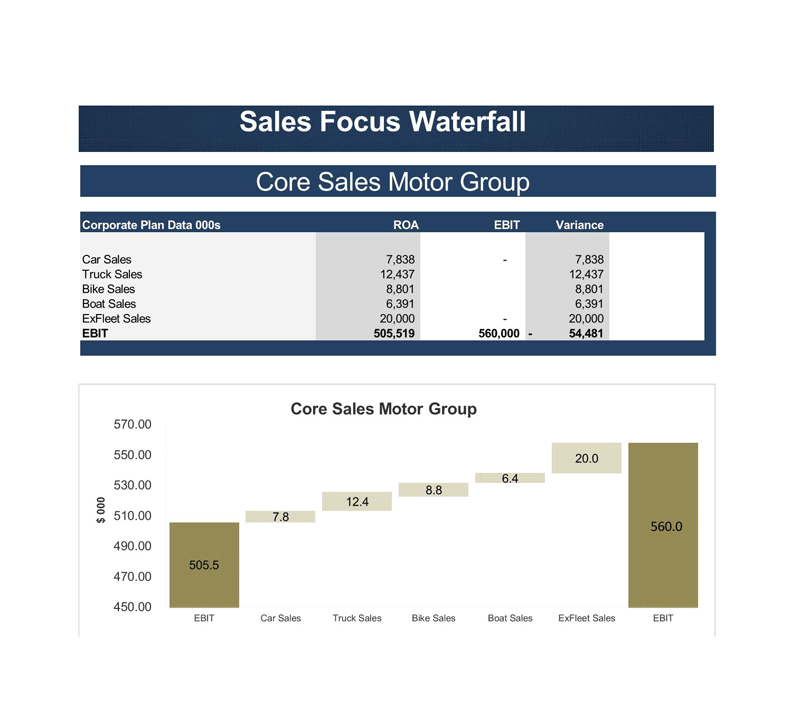 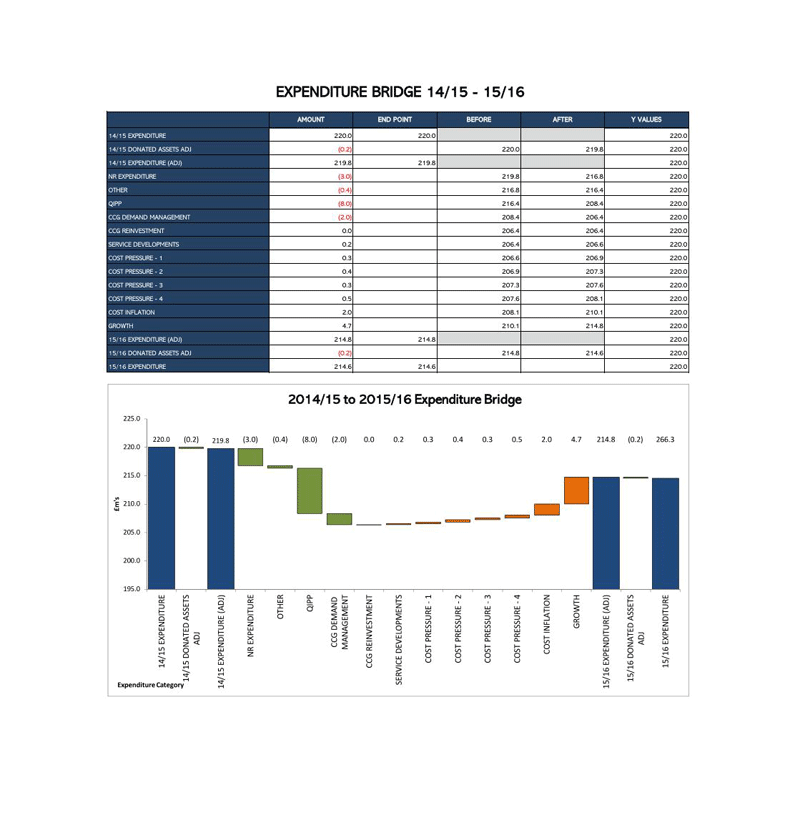 Creating a Waterfall Chart on PowerPoint

Creating a waterfall chart on PowerPoint was formerly an arduous task, but it has become easier with the new editions of PowerPoint.

Here are the steps to do it:

Creating waterfall charts can be an arduous task, but there are a few tips that will make the task easier.

Some of these are as follows:

What are the challenges in using a Waterfall Chart?

Even though the waterfall chart is a great visualization tool, some of the challenges linked to its use include: it makes changes difficult, It is difficult to customize, It can invalidate the work you’ve previously accomplished, this method excludes end-users and clients, it typically works better for small projects only and the waterfall model can promote longer delivery times.

What are the advantages of waterfall charts?

How to Conduct a Business Impact Analysis [Free Templates]