Defamation Ceases and Desists Letter is a written notification that informs an individual or organization that is making false, malicious, or damaging claims about another party’s character or reputation.

The letter demands the recipient to discontinue, retract its statements or take action by a certain deadline set in the letter; otherwise, appropriate legal action may be taken by the harmed party. The defamation ceases and desists letter contains details about the offending party’s false statements and how the harmed party has been affected.

According to the Federal Definition (28 U.S. Code § 4101(1)), “the term ‘Defamation’ means any action or other proceeding for defamation, libel, slander, or similar claims alleging that forms of speech are false, have caused damage to reputation or emotional distress, have presented any person in a false light, or have resulted in criticism, dishonor, or condemnation of any person.”

Deformation statements can either be distinguished as per quod or per se. Per quod is a statement the plaintiff can prove caused actual damage. In addition, the plaintiff must have evidence of the injurious nature of the statements made.

If a company sells out a product but its customers return it and demand a refund after false statements are made. In such a case, actual proof of damage can be provided.

Per-se is a damaging statement presumed to be harmful; however, a plaintiff cannot prove it caused actual damage. A per se statement can be categorized as an indication that a person was involved in criminal activity, behaved unethically while conducting business or in a professional capacity, had a ‘loathsome,’ contagious or infectious disease, or engaged in sexual misconduct.

How to File a Defamation Lawsuit

The following is a step-by-step force of filing a defamation lawsuit:

The defamed party should start by collecting all available evidence of the defamatory statement.  Defamatory statements made via radio, television, or podcast can be recorded, or screenshots of the false statement can be taken. At the same time, a hyperlink can be submitted if defamation is made online. Using such methods to collect evidence of the false statements ensures the proof of the claims remains even when the offender attempts to take them down.

Show the inaccuracy of the statement

Next, the harmed party should estimate the damages resulting from the false statement. It may not be easy to attribute a monetary value to false statements. However, evaluations of judgments from similar cases where plaintiffs were awarded sums can help the defamed party to come up with a figure.

Prepare and file the lawsuit

How to Draft a Defamation Cease and Desist Letter

The following is a step-by-step process on how to write a defamation cease and desist letter:

First, the writer should indicate a date.  The date ensures information on when the letter was written is provided. The writer of the letter should ensure that the data is written in full.

Include the sender and recipient’s details

The recipient’s name must then be indicated in the salutation of the defamation ceases and desist letter. The addressee’s details ensure that the letter is direct in addressing the recipient. A proper salutation should accompany the addressee’s name.

Write the name of the state

The introductory section of the letter should cantina the name of the state where the harmed party resides. Mentioning the name of the state will provide information on which state laws apply. It will also inform the recipient on where a lawsuit is likely to be filed if no action is taken to rectify the false statements.

It has been brought to my attention that you have made a false and defamatory statement against me. According to the State Laws of San Francisco, it is unlawful to deliberately make false claims that can intentionally harm the reputation of an individual or organization.

Include the false claims or statements

The statements made include the following: ‘Mr. Smith was involved with the suspect, Mark Waves, for years. He may have information about the crime. There is also a possibility that he is a conspirator.’

Include the communication method used for slander

The method used by the offending party to convey the false statement should be included in the second section of the defamatory cease and desist letter. The writer /defamed party may indicate whether the statements were published online, in a newspaper, or told to a third party.

The statements made are false have no factual basis. They are a result of hearsay. The publication of these statements in the ‘San Francisco Daily’ ensured that the false claims were spread to its wide readership. The spread of such a false statement is damaging to my reputation.

I, therefore, demand that you issue an apology on the same page the false statement was made. I would also like a letter explaining the situation sent to my employer.

Give a deadline to reply

The actions I have stipulated should be done within the next 10 days. If you don’t comply, I will take the issue to court. This action may lead me to demand monetary compensation for the harm caused by your false stalemates.

The defamation cease and desist letter should end the signature and name of the writer/defamed party. An appropriate word should accompany the signature. A signature will indicate that the letter has been concluded.

A template for cease and desist letter is given below:

According to the state of [name of the state], these statements constitute [slander/libel]. The false claims you have caused against me have cost me my [highlight damages].

I demand that you [mention demands] by [ give a deadline]. If you don’t comply with my demands, I will seek monetary damages and equitable relief through a court of law.

A sample cease and desist letter is given below:

I am writing this letter because you have made false and misleading statements about me. The statements made include the following; ‘Alex Rain’s business practices are questionable and may amount to fraud. It is unclear how many businesses have been affected by his actions.’ These statements were published online.

According to the state of Minnesota, these statements constitute libel. The false claims have damaged my reputation.

I demand that you retract the statements and issue a public apology within the next 7 days. If you don’t comply with my demands, I will seek monetary damages and equitable relief through a court of law. 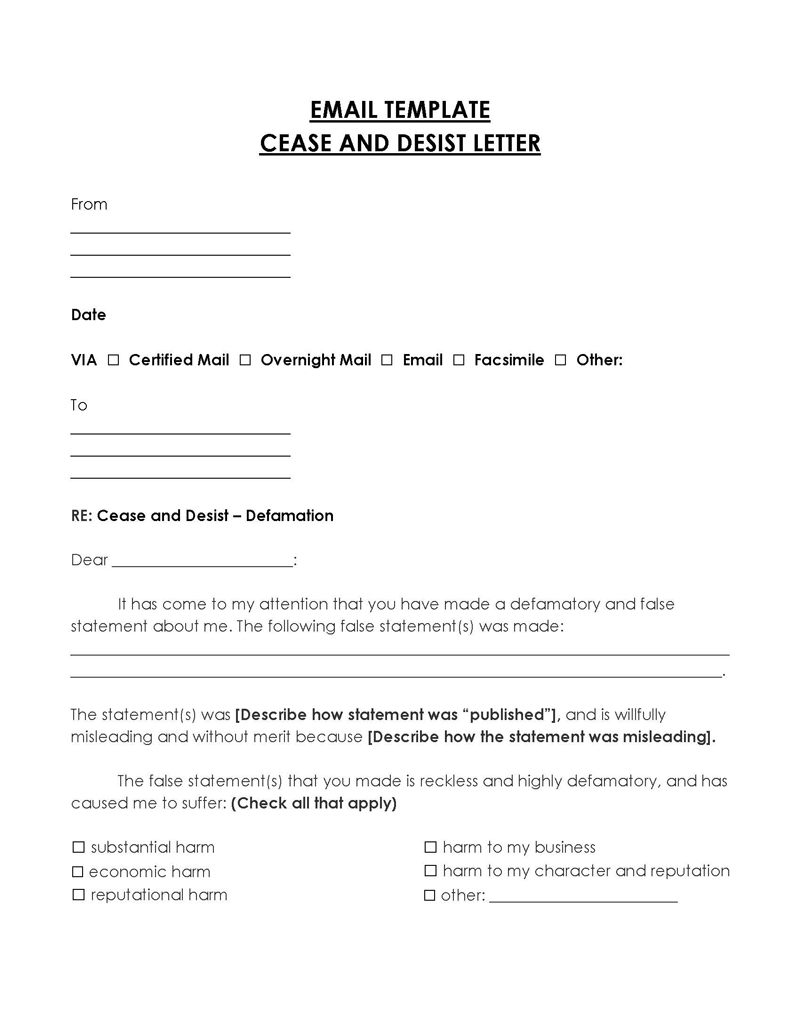 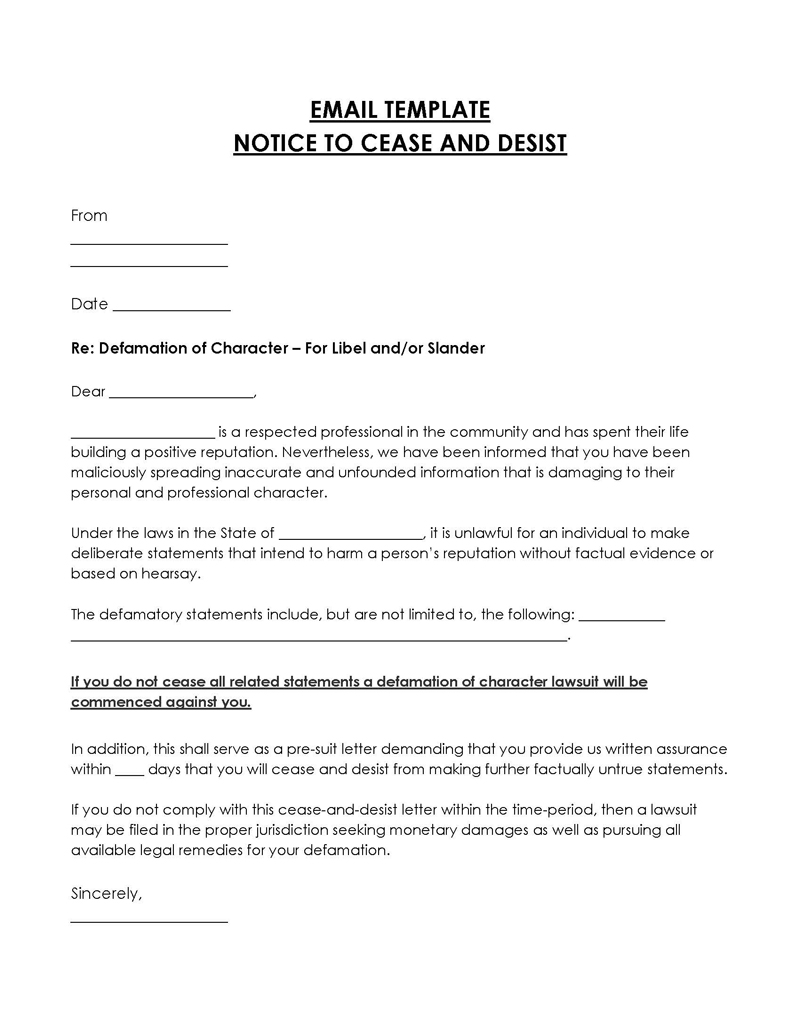 Is the Cease and Desist Defamation Letter legally enforceable?

Defamation ceases and desists letter is not legally enforceable. It simply acts as a warning to the offender that legal action will be taken if nothing is done to remedy the defamation. It can help the defamed party avoid going to court, which can be expensive and time-consuming.

What if my letter is ignored?

If the offender ignores the letter, then the defamed party can file a lawsuit. The defamed party should be sure to consult a lawyer before taking this action. The lawyer will help present the case before the court and incorporate the state laws when filing the lawsuit.

What’s the difference between libel and slander?

How to Serve Cease and Desist Letter (Protect Your Rights)