The most straightforward meaning of an at-will employment contract is that you and the employer can go your separate way without any reasons and prior notice. That implies that the employer can terminate your services at will without cause, explanation, or warning, and you can quit for any reason at any time.

An at-will employment contract is very flexible to both the employer and employee. The employer has the freedom in such an arrangement to terminate your services and vary the terms of employment without prior notice. The range of things the employer can vary are unlimited as long as federal or local laws do not prohibit them. For instance, the employer may terminate your benefits, reduce or extend your paid time off and alter your wages.

The main perk of being an at-will employee is that you have no contractual obligation to keep working for an employer you don’t like and can quit. You can’t be forced to work with the employer and don’t have to explain your reasons for leaving. While at-will employment is legal in all 50 states, laws exist to protect you from being fired due to discriminatory practices or retaliation.

This article will discuss how the at-will employment contract works and how you can navigate it to avoid the right infringement when under the contract.

How to Know You are an At-Will Employee?

Being an at-will employee carries some consequences. Therefore, it is imperative to determine whether you are employed on such terms. Many employees find out their status through an at-will employment contract. However, it is possible to have such classification from the HR department or the employer without explicit terms from the agreement.

There are two main methods you can ascertain that you are an at-will employee:

Anyone who works for an employer without a contract is presumed to be on an at-will employment contract. However, most employers make the terms clear in employment or other related documents. Make time to go through the employer’s employment documents such as the offer letter, application, human resource policy documents, job evaluations, etc. If any of the documentation in the company has any details on at-will employment, you are likely under the same conditions. The surest sign is the document you have signed, such as the offer letter or code of conduct that mentions your at-will status at the job.

Some employers may not have documents such as an at-will employment contract to help you know you are an at-will employee but only have to say it to make it enforceable. At-will contracts can be implicit or explicit, even if the employee does not directly use the word at will. Look for any relevant term in the documents to suggest that you can be terminated without justifiable reason.

Work policy documents may help shed light on the only reasons employers can fire their employees. Some job contracts outline the terms of employment, including the employee’s duties, work hours, length of employment, salary, benefits, and other forms of job security. Examples of job security are timed contracts that allow for firing only under gross misconduct or crimes provisions, for specified medical benefits, and social security that cannot be varied. Any such clauses in your arrangement are exempt from at-will contracts.

From the statements by your employer

In a few instances, some employers do not have sufficient written information to conclude that the job has a form of security or is based on an at-will employment contract. Therefore, it is essential in such instances to rely on the statements made by the employer declaring that you are at-will or otherwise.

Statement to declare at will or secured contract can be explicit or implicit. If the employer says that you can be fired at any time, then there is reason to believe you are an at-will employee.  Employers’ statements can be valid proof of an at-will contract.

Likewise, the promise that you cannot be laid off without a just cause is enough to constitute a contractual obligation. It is good to be aware of the reason that can lead to laying off workers at your firm so that you can defend yourself in case of an unlawful firing. The only caveat with the employer statement is you need to have some form of proof for the information made before or after

Employee Rights as an At-Will Employee

The low commitment level of an at-will employment contract often makes it seem that the employee is powerless. However, the federal and state governments have put laws and measures to ensure that you are safe from unscrupulous employers.

Let’s discuss the different employment rights guaranteed by legislation at the various levels of government:

The at-will employment contracts are uniform throughout the United States, with a few limitations the employer cannot breach. You have to seek redress if you are fired due to the following reasons during the at-will job:

Irrespective of at-will employment contract flaws, the employer cannot sack you as a form of discrimination. The discrimination law (42 U.S. Code § 2000e-2(a)(1)) protects against all forms of discrimination and punishment or demotions due to discrimination based on race, color, national origin, sex, etc., at work. Therefore, despite the unprotected nature of the contract, you cannot be mistreated or segregated at work due to any discriminatory policies. Therefore, you are entitled to demand better working conditions and pay if you suspect your term or termination is solely based on a discriminatory basis.

Transparency and honesty are good practices in any working environment. However, according to (29 U.S. Code § 2002) law, employers cannot subject their staff to a polygraph test to gain employment or benefits at the workplace. Therefore you should not be forced to use a lie detector by an employer. Consequently, the results of such a test cannot be used to fire, reduce benefits, or use in any way that affects you at work. In addition, a test result cannot be used to refuse promotion, discipline, or discriminate against an at-will employee.

Everyone with valid documentation is allowed to work in the US without discrimination. For example, suppose you have migrated to the US either as a refugee, asylum seeker, or immigrant with a valid work permit. Therefore, the law (8 U.S. Code §1324b) protects the at-will employee from discrimination, demotion, discipline, and unreasonable firing based solely on the national origin.

The at-will contract does not apply to illegal immigrants who seek labour illegally in the US. Additionally, employers with less than three employees cannot be subjected to this exception, making it hard to enforce if you are working for a small organization. Equally, some jobs require specific national identities to meet the law, regulation, executive order requirements, state and federal statutes, or local government contracts.

The Occupational Safety and Health Administration is a federal regulatory agency that ensures safety at work. The agency provides rules for ensuring that workers have safe working conditions.

According to (29 U.S. Code Chapter 15)  law, it is the employer’s responsibility to ensure that OSHA rules are complied with and against regulation to fire any employee to meet the requirements. The protection afforded by the OSHA requirements applies to all employees, including those under at-will contracts.

Public policy is a well-known and widely applied rule in the United States, with at least 43 of the 50 states recognizing and applying the rule. Public policy is the rule that is applied within a state. The practice is there to safeguard citizens with good standing following the law.

If an employer requires an at-will employee to commit a crime in the line of work, the person can comply with state law without fear of retaliation such as firing, demotion, or loss of benefits. The rule is extensive and may protect whistleblowers who reveal secrets at employment without fear of retaliation. The law is widespread but does not apply in Alabama, Florida, Georgia, Louisiana, Maine, Nebraska, New York, and Rhode Island.

As stated earlier, at-will employment contracts can be either implicit or explicit. The repercussions of such protection are that even when you are in an unwritten contract with the employer, any statements, including oral suggestions of procedure of firing by the employer, can set aside any arbitrary firing from a simple at-will job.

Implied contracts can also be seen in the suggestion of the employee handbook or any other employment document. Implicit suggestions can include termination policies that declare that an employee cannot be terminated for a sound reason.   Read through the employment documents to understand your rights. Rights offered to all employees cover at-will employees as well. Unfortunately, the law does not apply in the states of Delaware, Florida, Georgia, Indiana, Louisiana, Massachusetts, Missouri, Montana, North Carolina, Rhode Island, Texas, and Virginia.

The law expects the employer to deal with the employee in good faith. At all times, the employer must have sincere intention to be fair, open, and honest, regardless of the outcome of the interaction. The good faith and fair dealings doctrine forbid the employer from using underhand dealings.

Employees who may have been fired, demoted, or disciplined with malice have grounds to sue for wrongful termination even in an at-will contract. Good faith rule is not widespread and is only applicable in Alabama, Alaska, Arizona, California, Delaware, Idaho, Massachusetts, Montana, Nevada, Utah, and Wyoming.  Due to its limited application cannot protect all US employees from bad employers who exploit at-will arrangements due to its limited application.

Many employees write the at-will employment contracts to make it easier and cheaper to dispose of employees. However, at-will arrangements present a dilemma to many potential employees. It would help if you had the job but did not want to commit to regulations that may seem unfair.

Here is what you should consider:

An At-will employment contract can be good if attached with other good terms. However, whether to sign or sign can sometimes seem trivial as many courts have concluded that employers still reserve the right to fire you even if you do not sign the agreement.

The best option for the worker is to work through issues to ensure that the terms of the agreement are reasonable. Popular methods used include the use of performance improvement plans. Suppose the employer, for instance, promises guaranteed continuous employment while applying.  You cannot enforce a verbal promise from an employer. Instead, make them sign their promises in writing. The written agreement is easier to prove, more accessible for courts to enforce, and more challenging for employers to deny.

When to think twice before signing an at-will agreement?

Some employers may use deceit to get you into signing an at-will employment contract. For example, if an employer promises you by word of mouth to encourage you to sign the contract but is unwilling to commit, you must think twice about the offer. Similarly, if the employer wants to undercut the original promise, talk about the discrepancy before it’s too late. 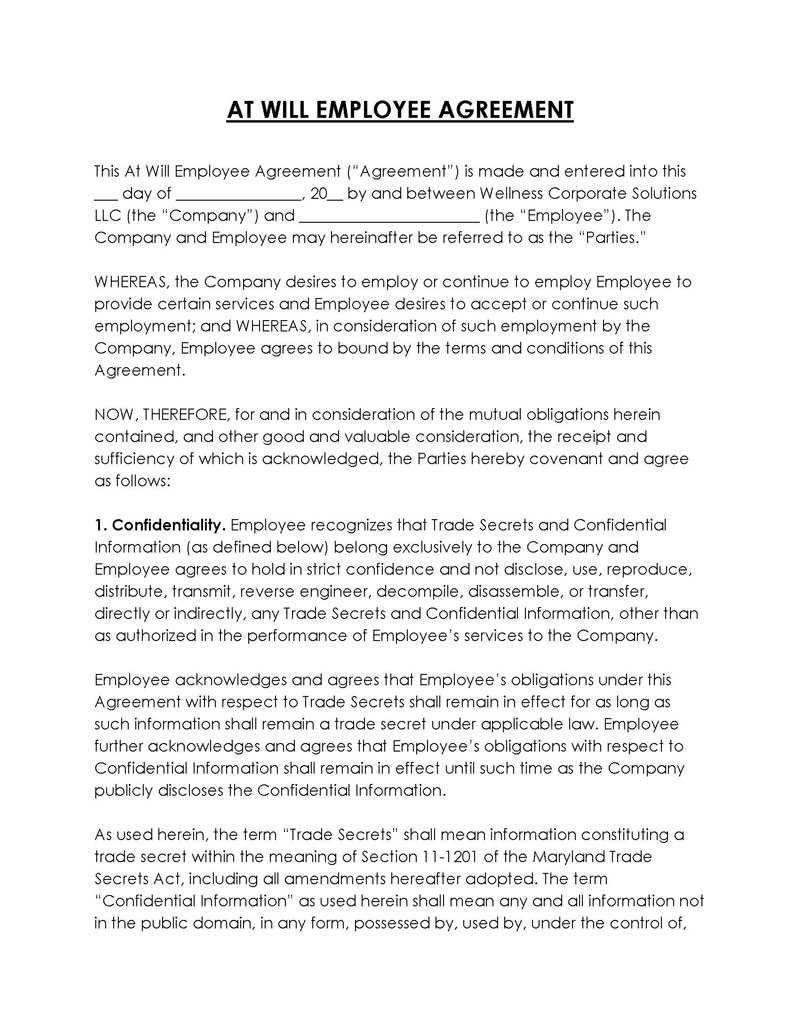 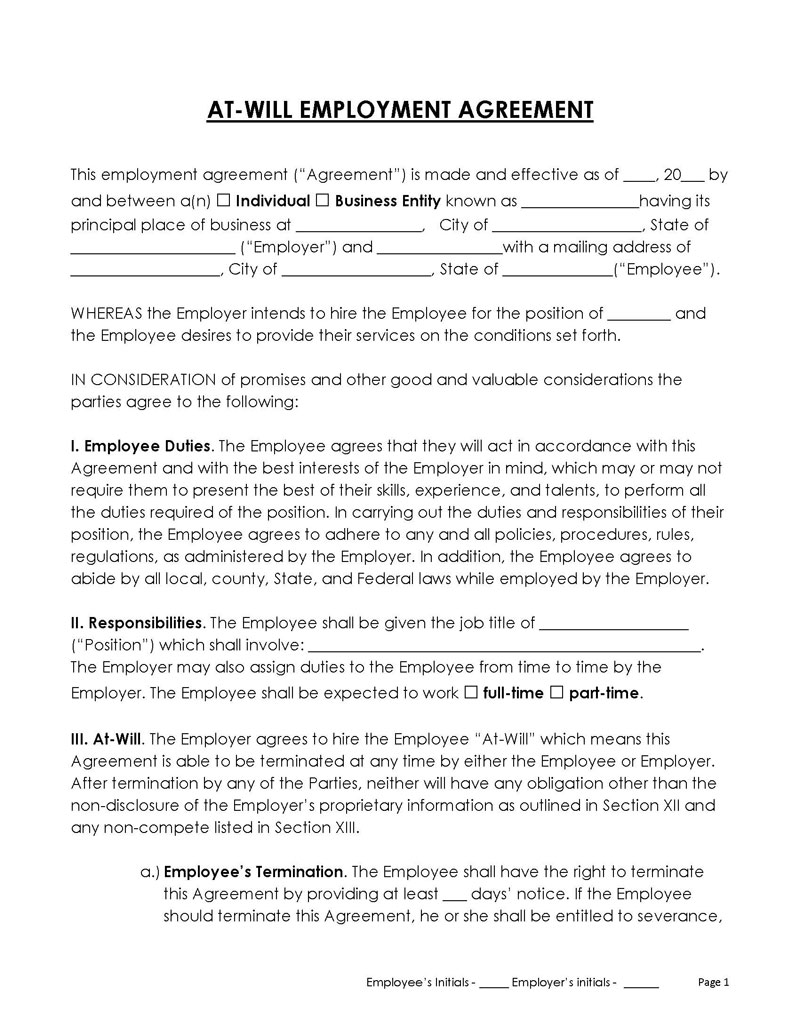 An at-will employment contract provides job flexibility to both employers and employees. For example, employers can easily lay off workers without fear of legal ramifications, fines, severance pay, etc. On the other hand, employees can get a temporary job to jump on another ship any time when the grass is greener. However, at-will employment contracts offer employees a lot of risks as they can be retrenched without consideration. Therefore, all contracts must be studied keenly to ensure they are fair to the employee and ensure that state and federal laws are upheld.

How to Accept a Job Offer | Free Acceptance Email Templates