Yahtzee is a game played using five dice, each die has six sides with numbers from one to six on each side. And Yahtzee Score Sheet is used to note down the scores.

One of the most popular dice games in the world, Yahtzee is great for both small and large groups.

The objective of Yahtzee is to roll five dice in order to score combinations and get the highest total score. Although the scoring can be confusing at first, with some patience, you can learn the basics and enjoy the game in very little time.

In a way, Yahtzee is like golf as a group game of Yahtzee is basically a few people taking turns to play their own solitaire game.

Every game of Yahtzee is made up of 13 turns or rounds, that is the reason for the 13 different dice categories on Yahtzee score sheets. Players can roll the five dice or fewer a maximum of three times, in a bid to get the highest score in each of the scorecard categories.

The Dice of Yahtzee

In every Yahtzee game, there are five standard dice that are rolled in the cup that is included in the board game. alternatively, you may roll the dice with your hand. If you want to build a DIY Yahtzee game, all you need are five dice and any kind of cup and some printable Yahtzee score sheets.

On the first roll, you are required to roll all five dice. After the first roll, you may “Keep” or “hold” any die or dice by setting them aside. The purpose is to build the highest possible score in any category that does not already have a point in it.

Your second roll involves rolling the die or dice that you are not “holding” or “keeping”. You are permitted to roll all five dice if you chose not to “hold” or “keep” anyone. Once again, you may “hold” or keep any of the dice you choose.

Note: You do not necessarily have to roll the dice three times. You can roll the dice once, and if you get a combination you are looking for to fill in one of the Yahtzee categories.

Once you have rolled the dice for the first, second, or third time, you can enter points into any open category of the Yahtzee score sheet. After you have entered a score into a category, even if the score is zero, the category is now closed for the remainder of the game of Yahtzee.

Each category on the Yahtzee score sheet is governed by its own rules for entering points, as shown below:

If for instance you roll the dice and come up with the result below:

You can use the three 5’s in the five boxes category for 15 total points, you can also play in the fours box for four points, or in the one’s box to score one point, or in the three or sixes categories for zero points.

Choose the box to place the score

From the example above, you need to consider what score each box gets you. Playing in the 5s box gets you the higher score. But if you roll a higher fives score, you will not be able to play the fives box again.

In the lower score categories of the Yahtzee score sheet, you must score the total of all your dice, or an indicated amount, or Zero. Unlike the upper section, where you simply list numbers, the lower section uses phrases like “full house” and “three of a kind”. These terms mean different combinations of dice that are all scored differently.

Consider rolling the dice below:

The only way to score three of a kind in the lower sections of the Yahtzee score sheet is to roll three of the same dice. From the example above, there are three sixes. You can proceed to add all the values of your dice together. You get a total of 18 to be added to the three and two, which gives us a total of 23 to be recorded in the three-of-a-kind box.

How to place scores

Three of a kind score

If for instance, you throw all five dice and come up with three sixes.

You will be able to record the score in the three-of-a-kind category by adding all three sixes which makes 18, and the two fives give us10, bringing the total to 28 points.

Score four of a kind

Similar to the three-of-a-kind score, you can score in this box only if you have four dice with the same value. You can score this by combining the values of all four dice.

If you roll the dice and you have the twos adding up to 8, and by adding the remaining six, you can score 14 in the four-of-a-kind box.

The score of a full house

A full house earns you 25 points regardless of the values of the dice. You need three dice of the same number and two dice of another number to be able to score 25 points in the full house box.

You have earned a full house. You can disregard the value of the dice, and score 25 in the full house box of the Yahtzee score sheet.

Score a small or large straight

Similar to poker, having a straight in Yahtzee means the values of the dice can be arranged sequentially to form a sequence of four or more.

A Yahtzee is one of the largest rolls a player can score. To score a Yahtzee, all five dice need to be showing the same number after you roll. The first time you score a Yahtzee, you score 50 points, however, subsequent Yahtzee attracts 100 points.

Fill in the chance box

Adding up the face of all five dice values scores the chance box. You can score in this box by adding the value of all 5 boxes, regardless of the combination. You do not need a combination of repeated or sequential numbers to score in this box. However, be careful not to score low.

At the end of the game of Yahtzee, you can calculate your score. The person with the highest score wins the game. Add up the upper section and put the total score in the “Total-score“ section of the Yahtzee score sheet. If your score is at least 63, you qualify for an additional bonus of 35 points.

Add up the scores in the lower section of the Yahtzee score sheet. Add 100 points if you scored more than 1 Yahtzee in the game. Add the upper and lower section to find out the final total of the game.

Playing Yahtzee: What to Do?

The best way to enjoy a game of Yahtzee is to get all the materials ready and know all the rules. You do not need to waste any more time trying to draw up a Yahtzee scorecard, we have provided free Yahtzee templates to make sure you enjoy your game of Yahtzee. 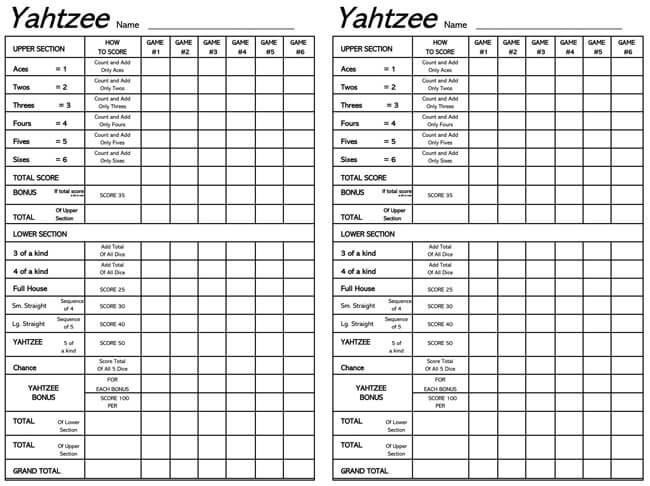 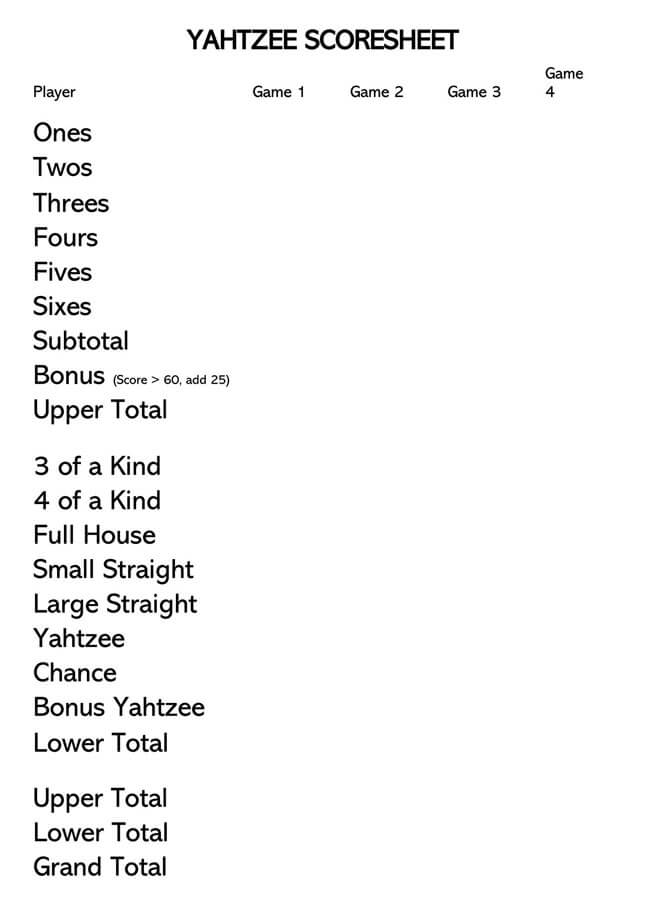 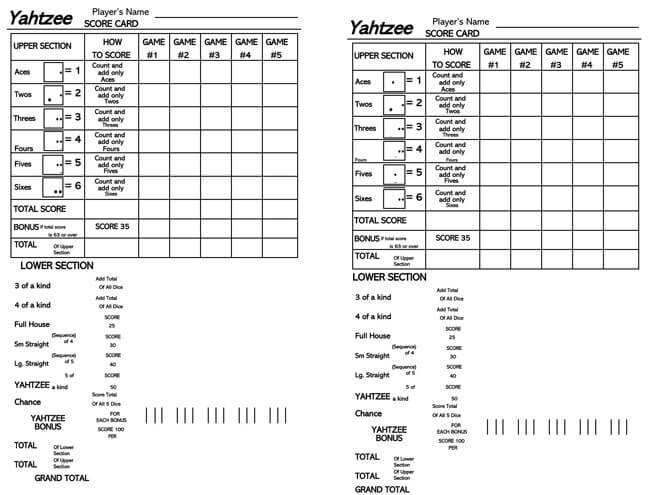 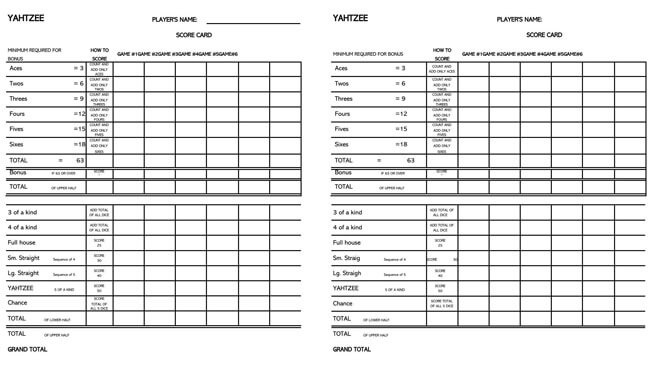 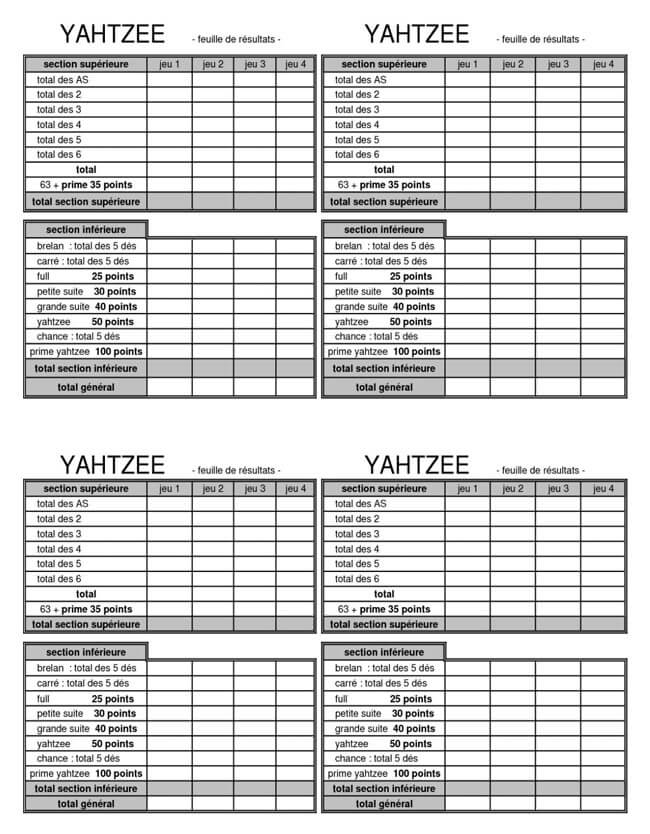 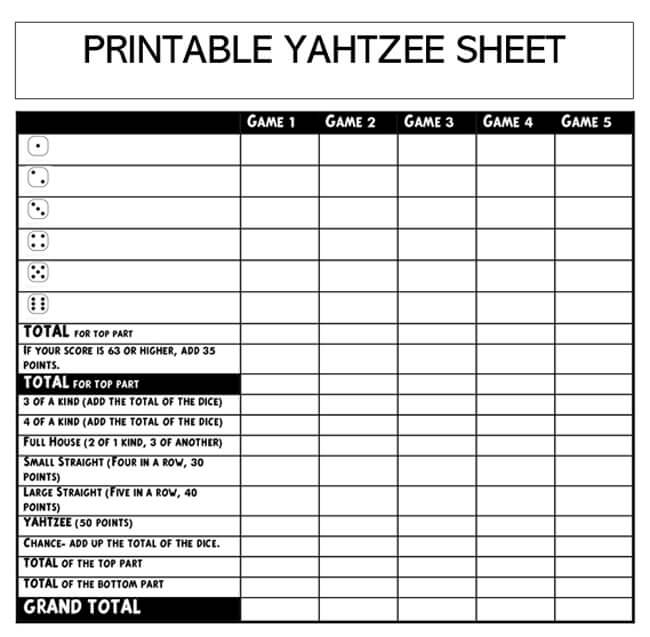 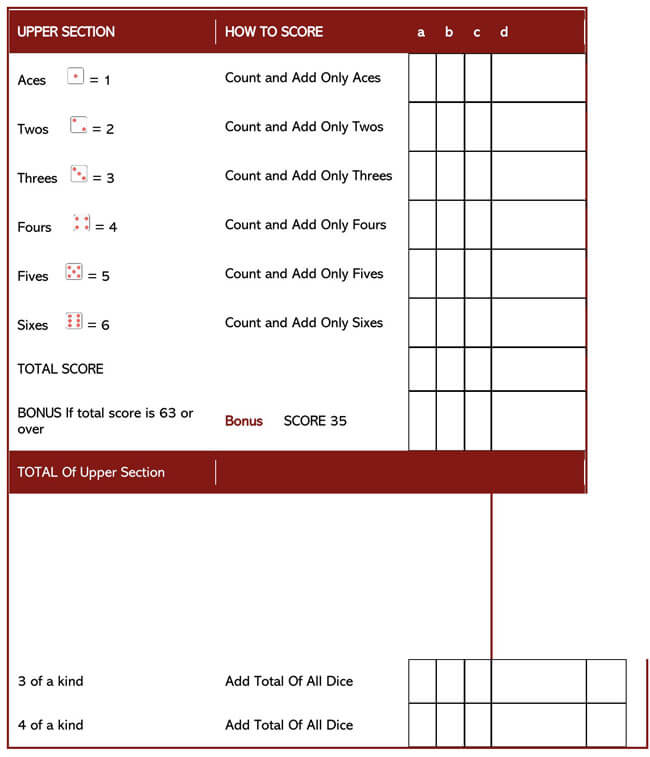 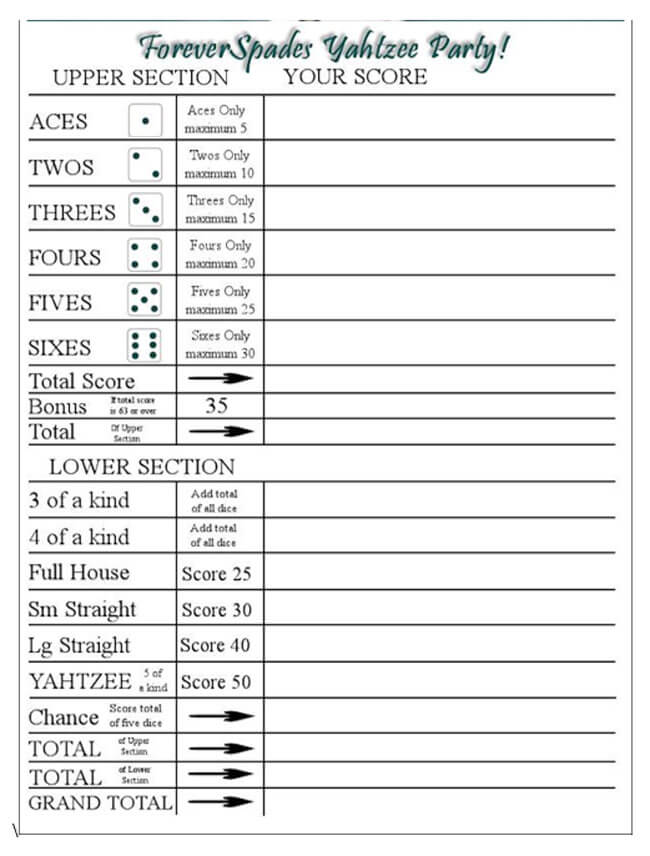 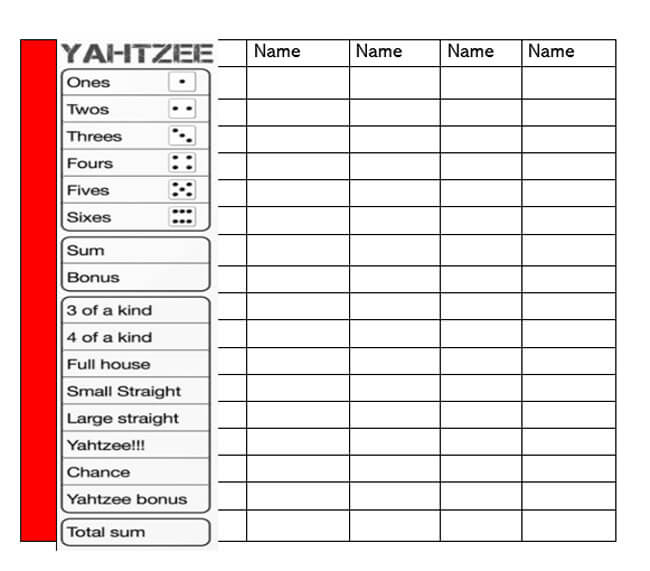 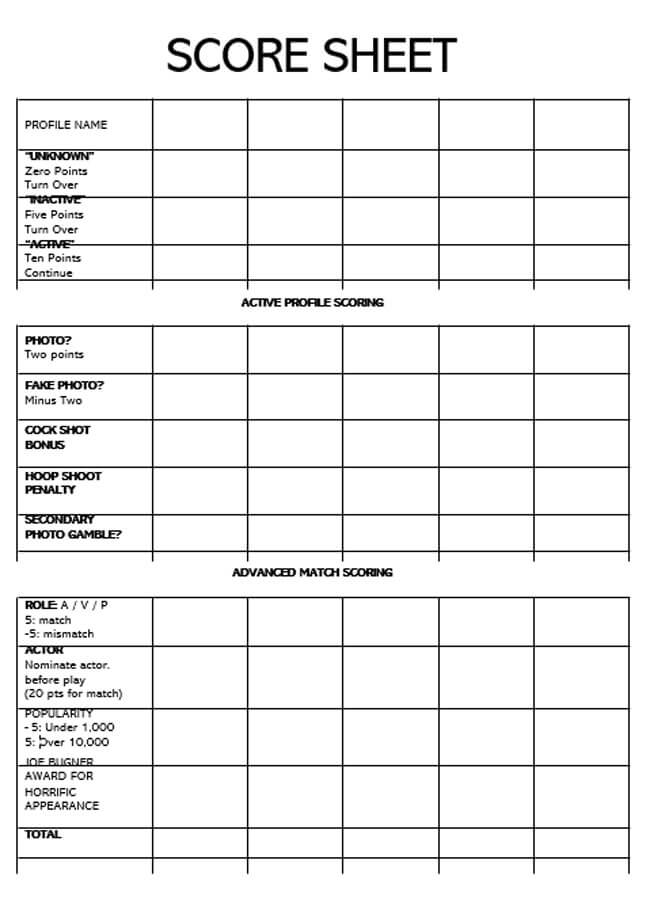 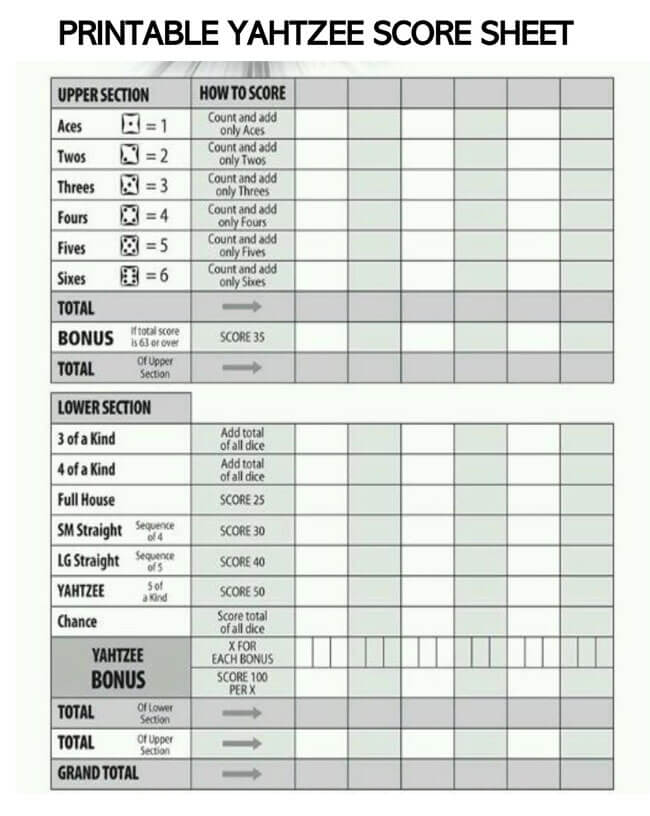 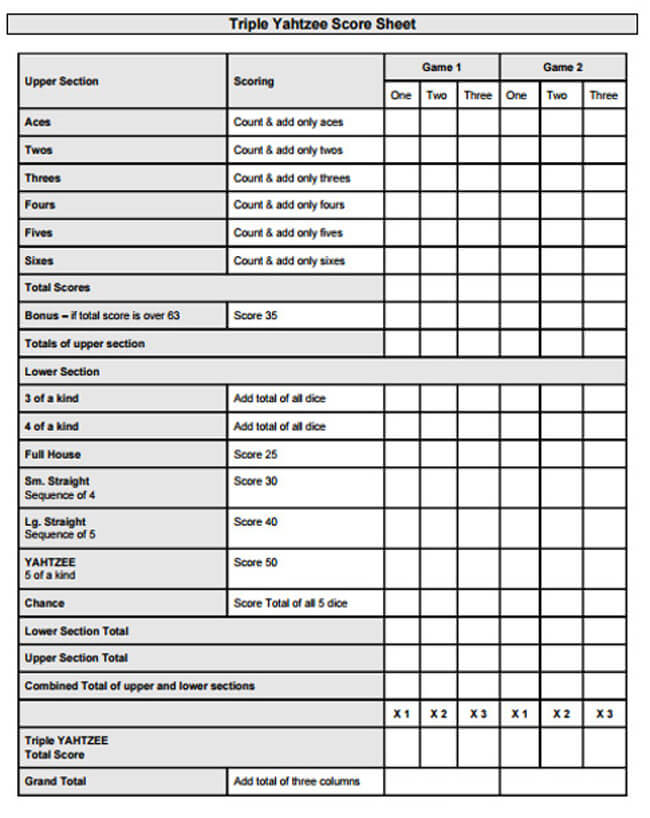 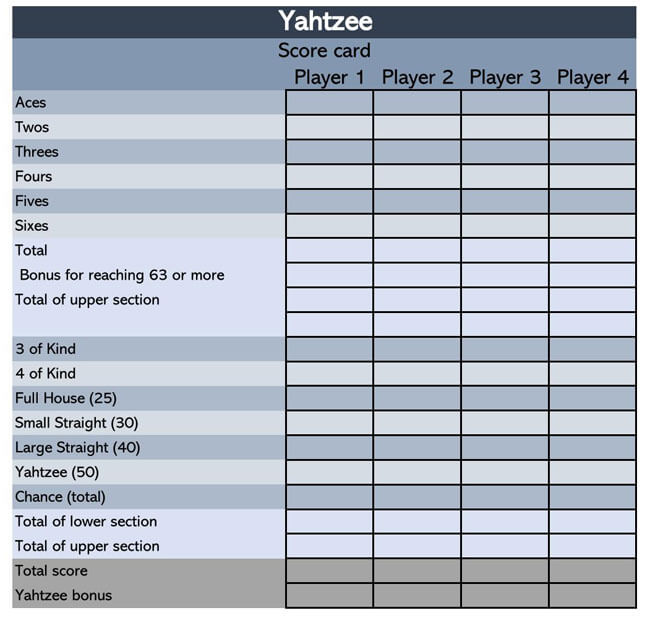 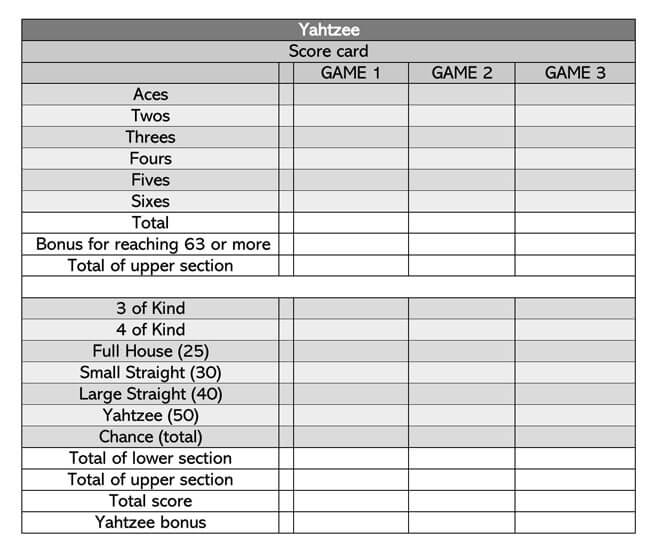 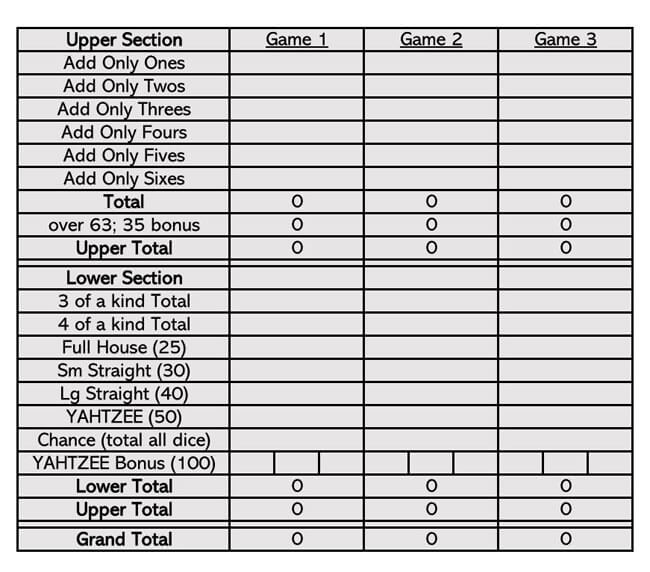 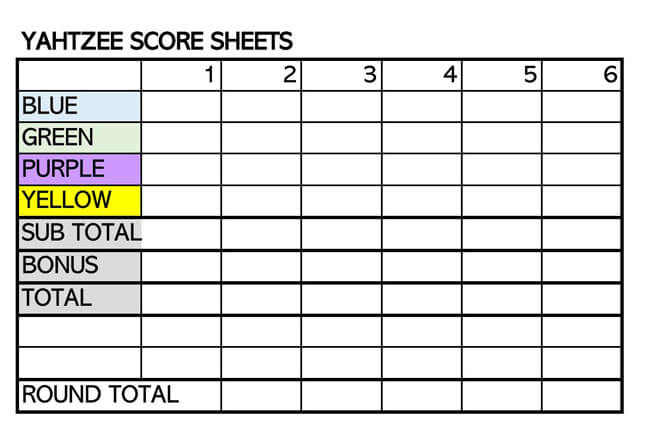 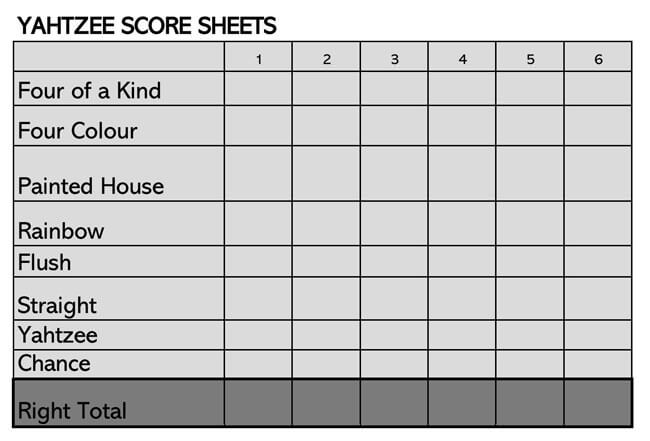 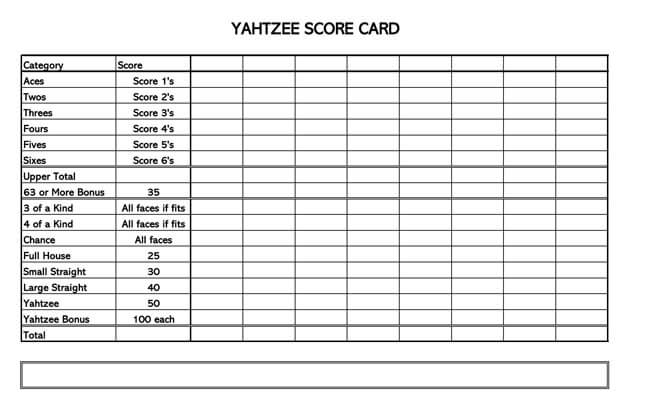 Yahtzee is a game of chance, however, with a good strategy you can maximize your chances of scoring higher scores. Since you can only record in each box once, you can ensure that you only record the highest possible scores from the combinations you roll using certain strategies.

Maximize your chance at scoring a Yahtzee

Like most all other dice games, Yahtzee is a game of chance. However, the strategy also comes into play in the game of Yahtzee.

Pro Tip: If you have already scored a Yahtzee, never score a lower score over trying for a second Yahtzee.

Go for the 35-point bonus

Deciding where to score your round often confuses many players. However, if you keep the 35-point bonus in mind, you can strategize better.

Getting a higher score with a lower number like in the ones and twos boxes is unlikely, so, it is better to score in the upper section if you roll more two’s or one’s.

Aim for straights early on

Avoid scoring zero in any of the lower boxes. The lower boxes have the potential for high point values, and as such, you should aim to get straight early in the game so you can concentrate on going for Yahtzee’s. Be on the lookout for combinations where three numbers are sequential, 4-5-6, 2-3-4, or 1-2-3 for instance. Re-roll the dice to fill in the remaining two numbers to get a straight early in the game.

Scoring a Yahtzee is a rare chance regardless of your strategy. So, if the game is far gone, and the score is tight and on top of that you are yet to score a Yahtzee, you might want to score high in the upper section rather than go for a 50-point Yahtzee. Usually, you will get a bonus, which may translate into a higher score. However, if you score a second Yahtzee, you would only get 50 points instead of 100 points, so be careful.

Can I use the score of one of the dice in the upper section?

You can score a single die in the upper section if you are prepared to settle for a low score.

Can I only write 0 in the top block?

You can write down the total score you got for the number in question.

When did Yahtzee come out?

Yahtzee was introduced to the public in 1956.

Where to play Yahtzee?

Yahtzee is a very accessible game. You can, of course, buy a Yahtzee set at a local toy store to play. If that’s not an option, all you need is five dice and a Yahtzee scorecard which you can easily print. If you’d like to play now, though, you can play Yahtzee online on websites like Solitaired. You can play against a computer, invite a friend to play against it, or find a random person.

The game of Yahtzee combines chance and strategy, it is an intriguing game that guarantees a fun group activity with friends and family. You can enjoy Yahtzee in small groups and large groups and you do not need to worry about getting an accurate scorecard. We have provided free Yahtzee scorecard templates to make your game of Yahtzee that much more fun. 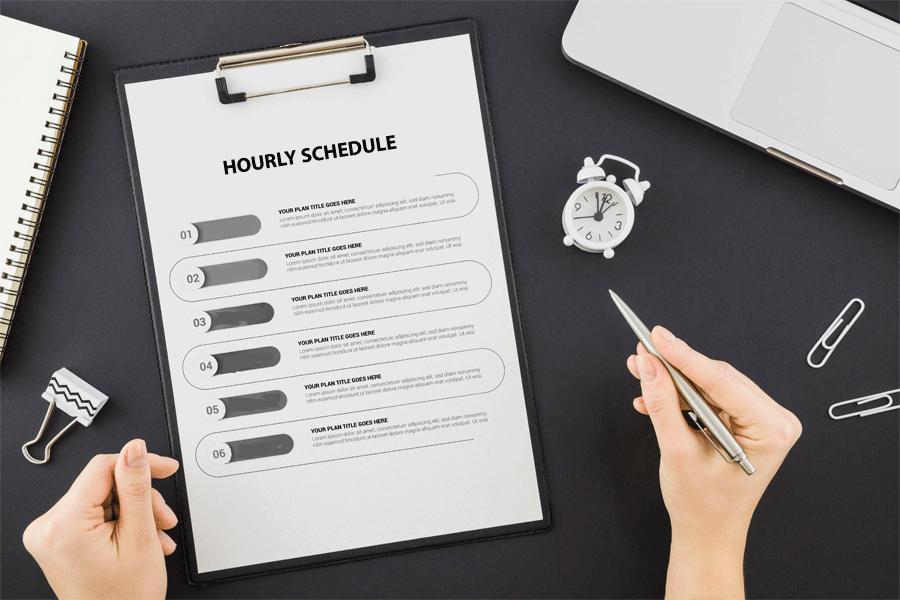 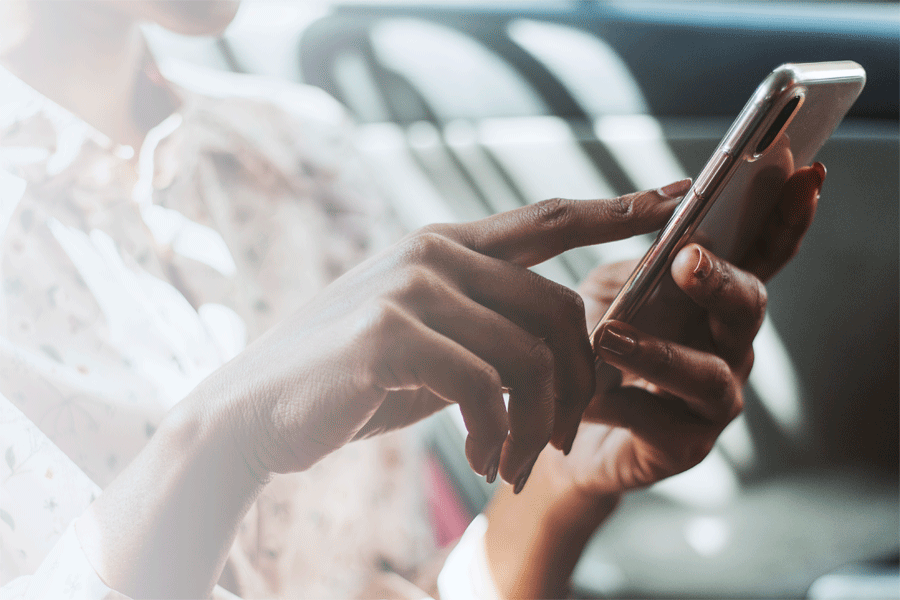 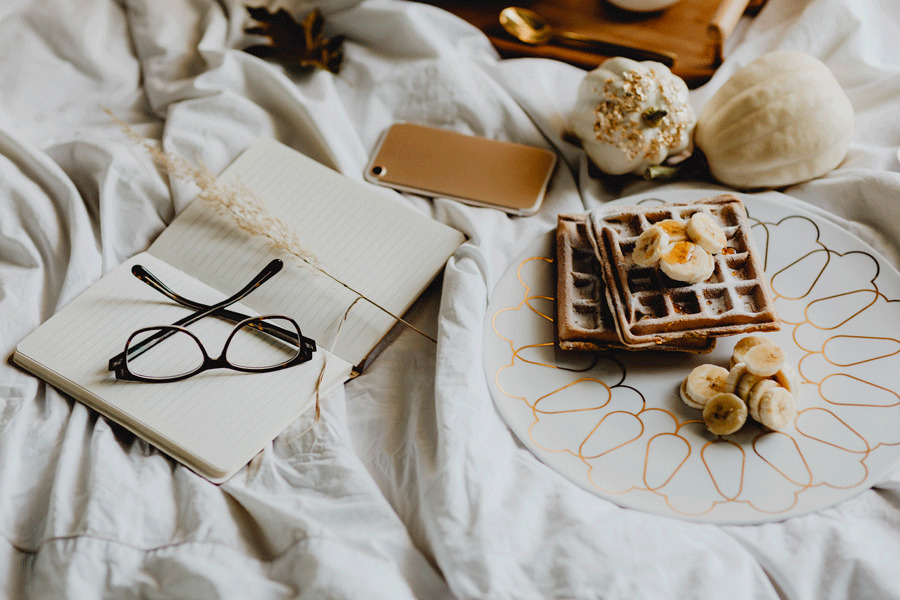 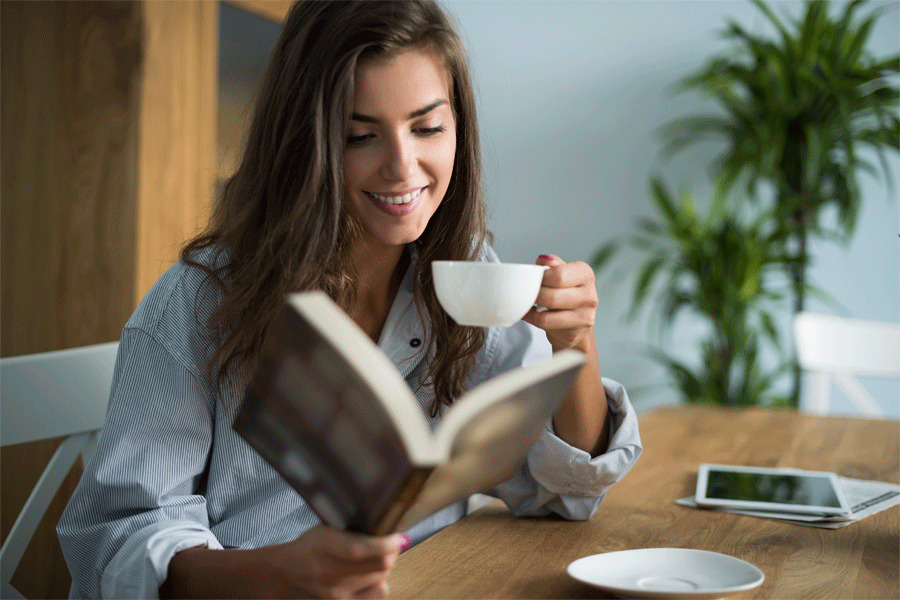 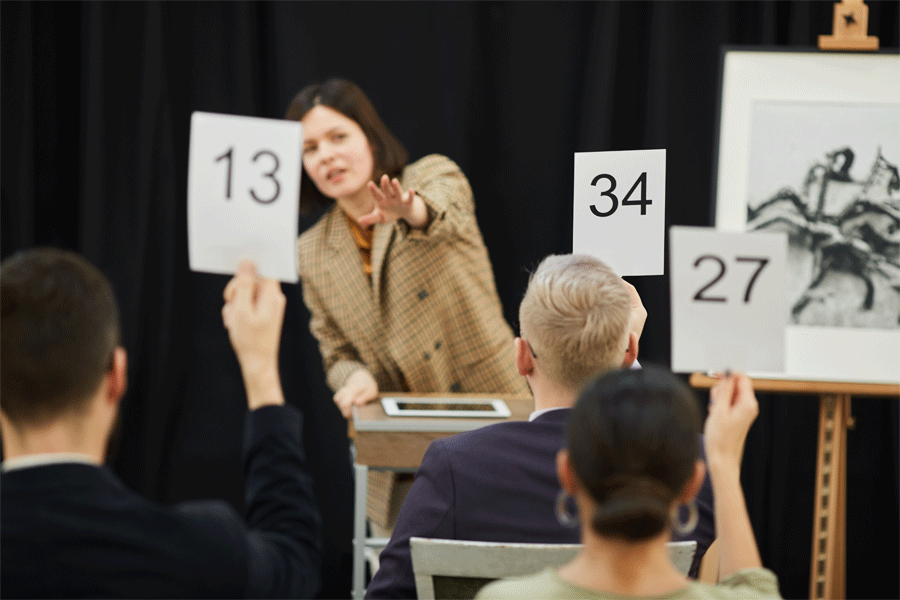 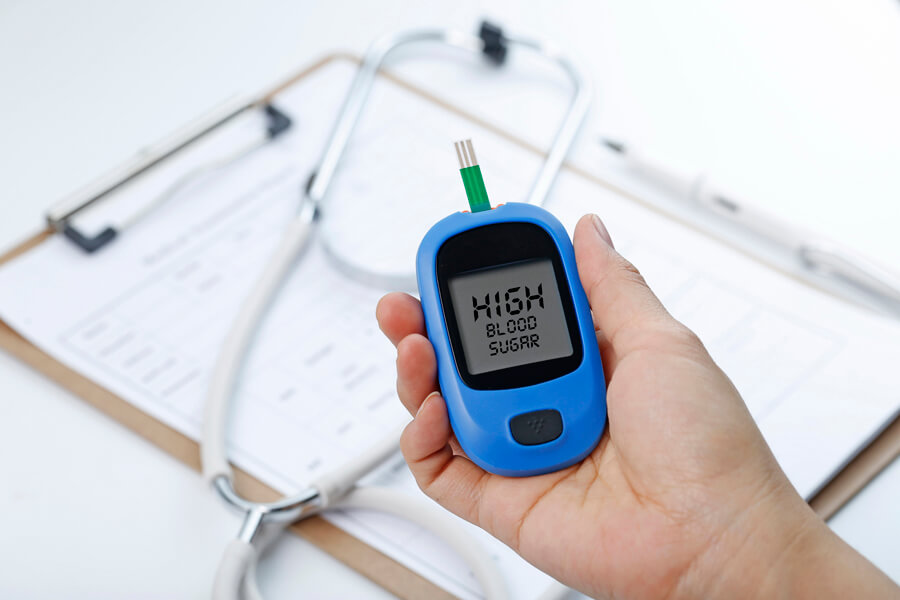 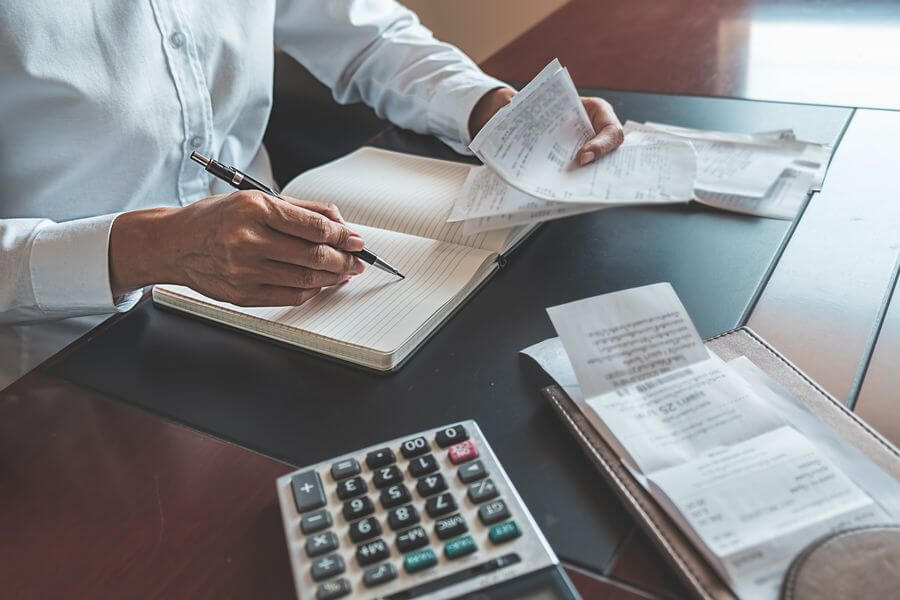 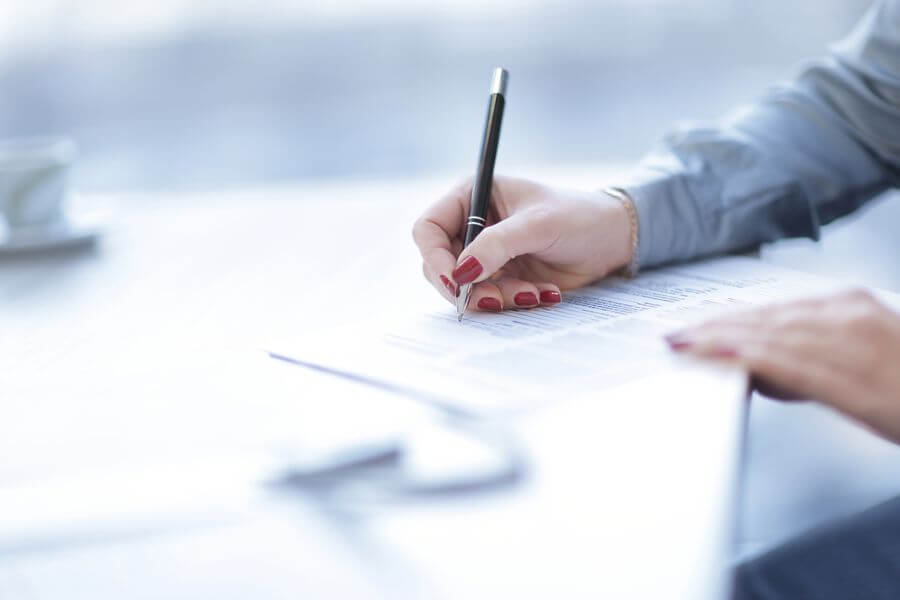