A Power of Attorney (POA) in Indiana is a document or a type of record that grants legally recognized authority to an individual to act or make binding decisions in some capacity on behalf of another person, due to physical or mental disability, being absent, or a requirement of the decision-making expertise of a professional.

The person to whom such authority is granted can represent the individual who granted the authority in some matter and make decisions as though they are indeed the original person to whom the authority belongs. Such affairs in which a POA is used include finances, health care, care of minor children, or some other arrangement.

An Indiana POA is written up either in handwriting or by typing out the specifics of the authority transfer and does not have to be overseen by any legal authority or expert besides the notary public who oversees the signing and seals the document. The drawing of up such a document can be overseen by an attorney to avoid ambiguousness and loopholes.

The POA and all other matters in Indiana are specified under Title 30, Article 5 of the Indiana Code.

Types of POA in Indiana

There are varying situations in which differences in the scope of authority transferred in each instance. Consequently, there are different types of the POA to authorize another person to act in each of these circumstances. Each POA grants a different scope of authority, regulates under what condition the agent can act, or dictate under what condition authorization occurs.

A limited POA grants authority to an agent within a specified boundary. This type of POA only allows the agent to act on behalf of the principal under some specific condition as stated in the POA document. For example, this can be within a time, upon the occurrence of an event, while the principal employs the agent’s services or for a particular number of transactions. After the conditions have elapsed, a limited POA is no longer valid.

A living will (Form 56316) is a declaration by a person about their preferred end-of-life procedures. A living will state the declarant’s intent not to have artificial life-sustaining procedures used to keep them alive due to incurable diseases, injuries, or illnesses.

A minor (child) power of attorney in Indiana transfers the authority from a parent or a guardian to another person to decide on behalf of the child regarding health care, education, support, and custody for a period not exceeding 12 months.

Revocation of power of attorney is a document used to terminate an existing POA in Indiana. The document states the intent of the principal to strip the attorney-in-fact of all previously granted powers under an existing POA. The means of revoking a power of attorney are stated under §30-5-5-2 of the Indiana Code, the principal must sign the document and notify the agent of the revocation.

A real estate POA gives a legal right to an agent to make decisions about the management of the real estate of a principal. This document authorizes an agent to acquire, sell, refinance, or lease out the absolute property of the principal over which the agent has been granted authority. Real estate POAs are covered under §30-5-5-2 of the Indiana Code.

A vehicle POA authorizes an agent t handle the registration, change of ownership, and other matters related to the titling of a motor vehicle or watercraft before the Indiana Bureau of Motor Vehicles on behalf of a principal. This type of POA is only valid for 90 days.

A springing Indiana POA is a transfer of authority that comes into effect only after a specific event. For example, the attorney-in-fact is authorized to manage some aspect of the principal’s affairs (which could be financial or medical) at a future time when the principal is unable to do so following a specific event, usually incapacitation.

A Department of Revenue (DOR) POA in Indiana, also referred to as a tax POA or Form 49357, is a document authorizing an agent to handle tax-related matters on behalf of the principal. This type of POA has a particular use and method of creation. The significant difference between a tax POA and other POAs is that the principal does not draw up the POA themself, and a notary public is not the authority who oversees the transfer of authority.

A DOR POA is valid for only five years and can be revoked at any time within those five years by the principal sending a letter to the DOA revoking the existing POA.

The requirements which must be met to create a power of attorney under Indiana Law are specified under §30-5-4-1 of the Indiana Code.

Any power of attorney created while these requirements are not met is not considered valid or binding.

Creating a Power of Attorney in Indiana

There are multiple steps involved in creating a power of attorney, each of which ensures that due compliance is maintained with all the requirements set forth under Indiana law.

Put it in writing

All power of attorneys must be established as a written document, either neatly handwritten or typed in Indiana. This document must state some required information relating to the transfer of authority on a particular matter. This includes the principal’s name, the agent’s name, the transfer of authority on some matter, the extent of the authority being transferred, the duration of the authority transfer, and the principal’s signature and a notary public.

The creation of an Indiana power of attorney does not have to include the involvement of a legal practitioner, but the document can be reviewed or drawn up by an attorney.

The person to whom the principal transfers their authority must be named in the POA. The agent must be specified by name and a business or home address. The identification must be clear enough that no ambiguity can exist. One or more persons may be named as an agent.

Describe the powers being assigned

The nature and scope of authority being granted to the agent must be stated in the POA. This prevents the agent from acting beyond the capacity intended by the principal. This is represented in the document’s wording, as using overly general words like “all” or “in entirety” can authorize the agent beyond what is intended.

This part of the POA states the point in time at which the agent begins to act on behalf of the principal. This can be made explicit using statements such as “effective immediately,” which authorizes the agent from the day the notary seals the document. In addition, a particular date in the future can be stated by the principal or a condition upon which the POA activates (springing POA).

The endpoint of a POA details the point at which the agent no longer has the authority to act on behalf of the principal. A POA will last indefinitely from when it was granted if no endpoint is specified. The endpoint is typically when the agent loses the powers granted. However, the endpoint can also be a condition, such as the termination of the agent’s employment.

The witness is called a notary public, a public officer certified by the law to act as such. The principal will sign the POA document in the notary’s presence, effecting the transfer of authority. However, the principal and the agent must both present some form of identification such as a driver’s license to the notary at the signing for verification. After these proceedings, the notary will sign and seal the document, confirming the transfer.

Revoke POA at any time

The principal can revoke an Indiana power of attorney at any time within which the POA is in effect. The principal will have to draft a letter that states the removal of authority from the agent and the effective date of removal. This document is also signed and sealed by a notary to certify it.

How to Identify an Agent or Representative

The person to whom a power of attorney is granted has significant authority over some aspect of the principal’s life in Indiana. The agent can make decisions that are binding on the principal, and as such, the appointment to such a position of authority should not be made lightly. 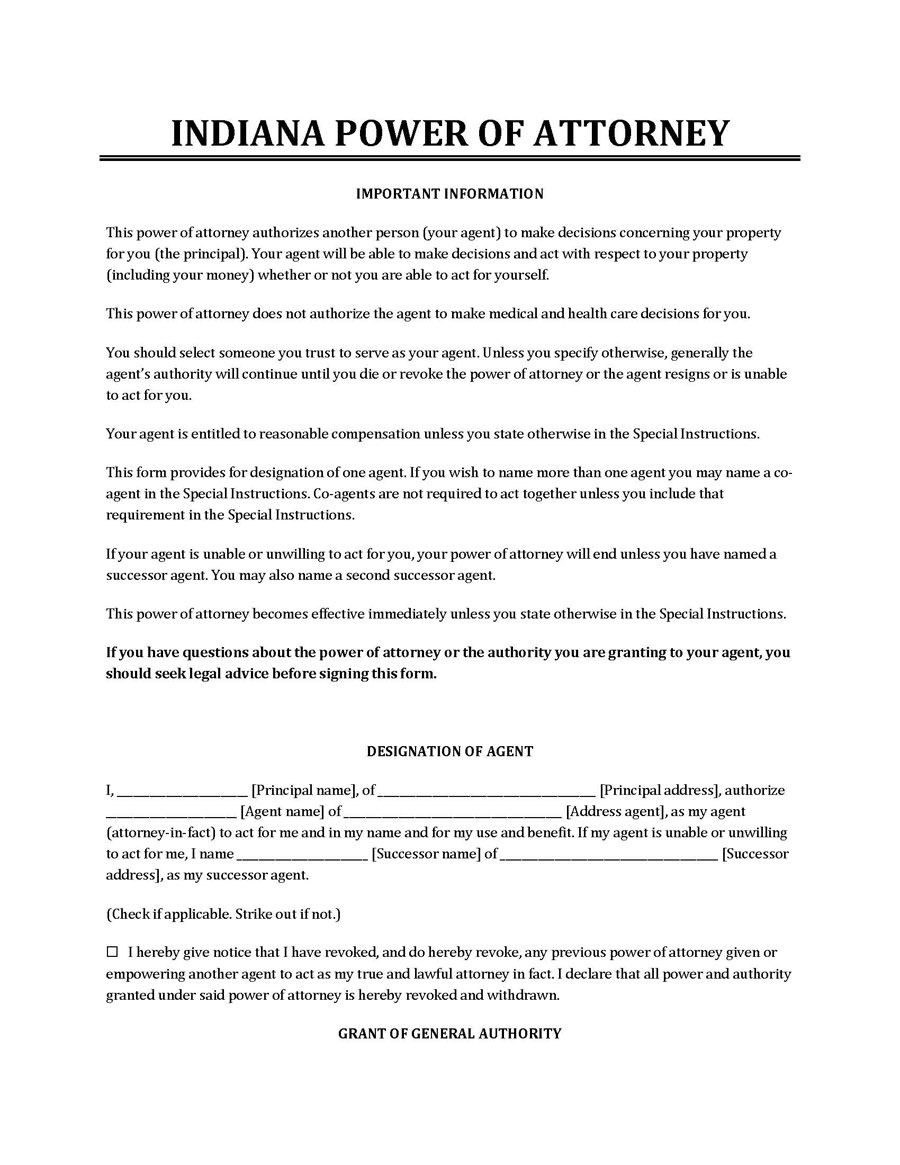 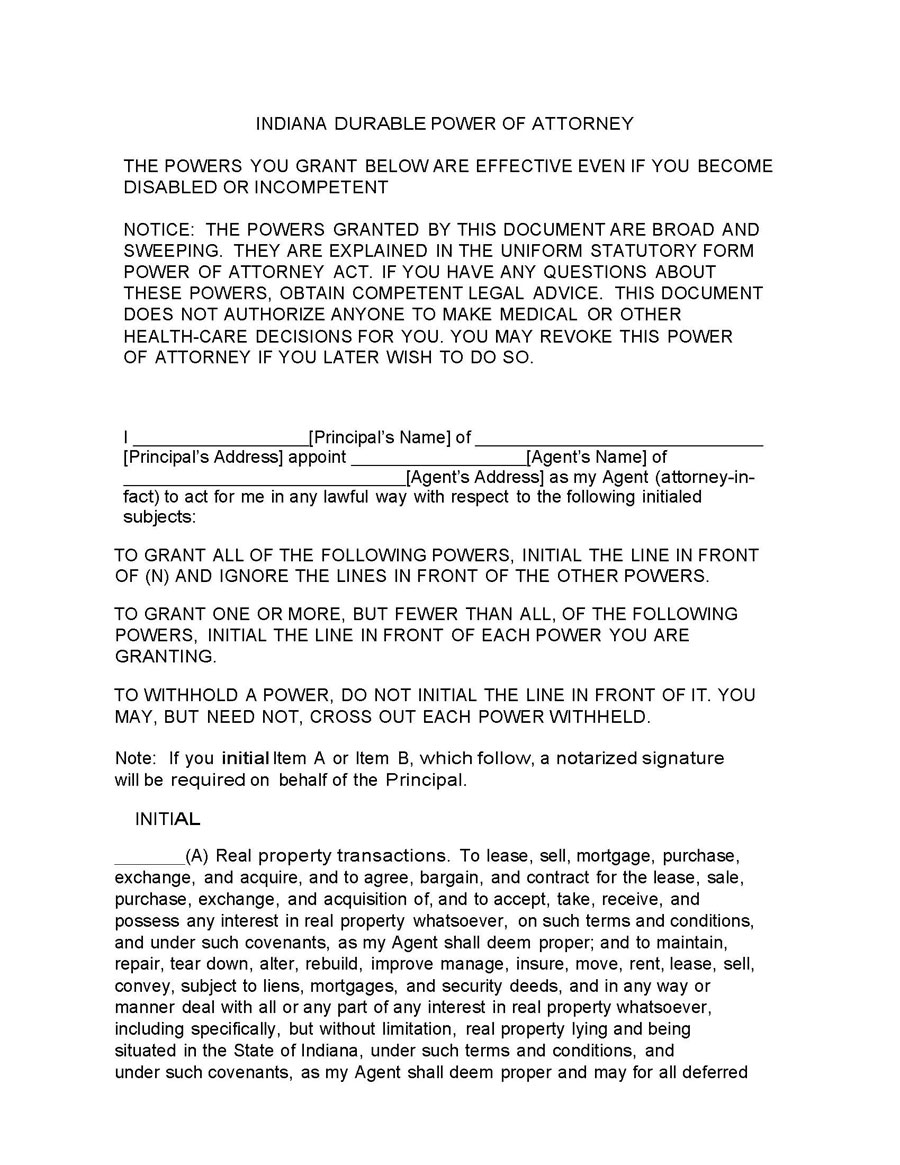 How to Get a Power of Attorney in Indiana

The transfer of authority to make special decisions has to be specified in a POA. This must be a single distinct document stating the principal’s intent to transfer his decision-making authority to a specified person and the condition under which the transfer occurs. The POA must be witnessed and signed by a notary.

Seek guardianship from the court

If a principal does not draw up a durable POA while mentally competent or before becoming incapacitated, a court can be petitioned to grant the powers of a POA. This is referred to as guardianship. To obtain guardianship, a petition will need to be submitted at the presiding local probate or family court.

How to Revoke Indiana POA?

Upon completing this document, the document must be sent to all parties to whom the POA was previously relevant. This is to notify those parties that the agent no longer acts on the principal’s behalf. Suppose those parties are not duly informed in this manner. In that case, the parties are not liable for any decision made by the former agent on behalf of the principal even after the revocation has come into effect.