The power of attorney revocation form is a document that lets a person put an end to an earlier delegated power. Once signed, this form straight away terminates the rights and responsibilities which were handed to a third party in the original power of attorney document. Technically;

Revocation of Power of attorney is a written confirmation that the Principal, i.e., the person who appointed the POA, wished to revoke or cancel the POA and no longer wished that the individual appointed to act on their behalf. Just as the Principal can Create a POA, they also have the power to revoke the POA.

A Revocation Power of Attorney should generally identify:

The Principal is usually the only person with the right to terminate the POA appointment. However, suppose the Principal’s family feels that the appointed Agent abuses the powers granted to them. In that case, the family may decide to take the matter to a family court in the respective state where the appointment was made to have the POA revoked.

If the Principal wishes to revoke the POA, they will first need to fill out the revocation of the POA form. The form will identify the following:

How Power of Attorney Revocation works

The power acts to reverse an earlier decision that was made with regard to delegating some duties and responsibilities. A form is filled which expressly puts an end to an earlier agreement or delegation of power. This form is signed in the presence of some witnesses and preferably before a notary public.

Several copies are then made and handed to the signatories to the previous agreement. This is to notify the parties of the change of heart and of the new intent. The previous agreement ceases to take effect the moment the revocation is signed and dated.

When to revoke the POA

There are various reasons why the Principal may want to cancel the Power of Attorney. Some of the reason include:

Other instances that may warrant the revocation of the POA include:

According to a November 2012 report by the US GAO- Government Accountability Office, older adults are more prone to financial exploitation by ill-meaning POA agents. Luckily, one can use the POA revocation form to help them revoke the powers they had initially granted to an ill-minded agent.

What makes the POA revocation valid?

It is not just enough for the Principal to call or email their Agent and inform them that they have revokes their POA. To make the revocation valid, the Principal must:

Revoking the Power of Attorney

There are three main steps involved in revoking the POA that one should know about when looking to revoke a POA appointment. 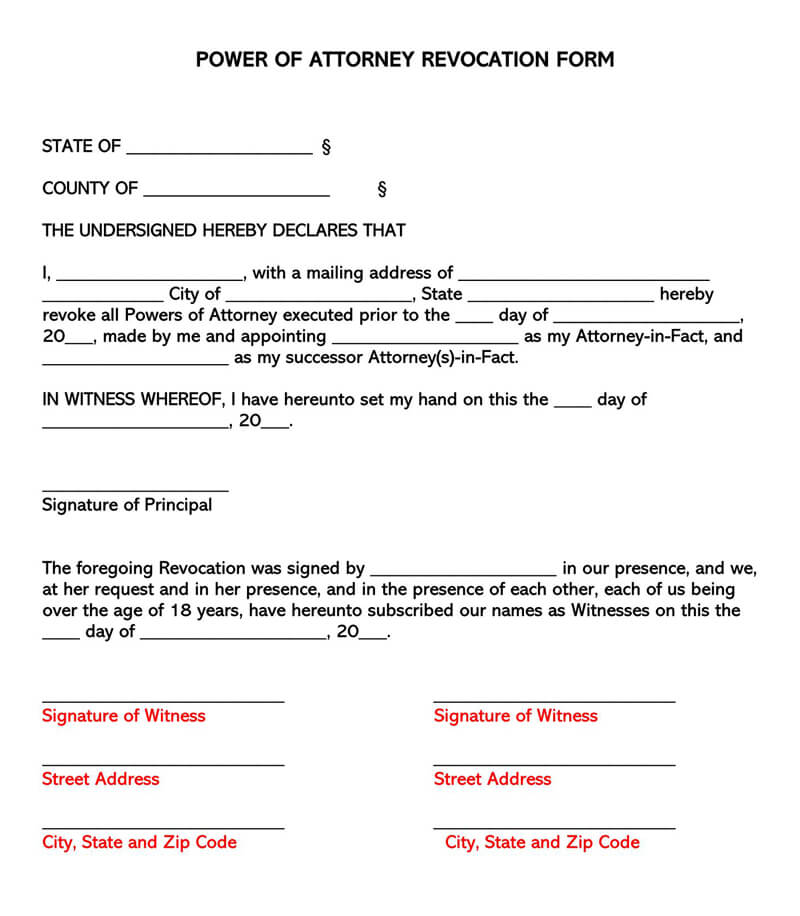 Consequences of Not Revoking the POA

It is important for the Principal to cancel their previous Agent’s POA since having the wrong Agent representing them in important financial and business decisions.

By taking time to revoke the POA, the Principal can prevent the following:

Can you verbally revoke a power of attorney?

No, a POA has to be revoked in writing to have tangible evidence of the revocation. The revocation may be presented to third parties as proof that the POA was revoked and the Agent previously granted POA is no longer authorized to act on the Principal’s behalf.

Is a lawyer required to revoke POA?

You do not require a lawyer to revoke a ‘power of attorney.’ This is a task you can conveniently and comfortably do as long as you are mentally competent. Even though a lawyer is not really necessary, you will find the intervention of a lawyer suitable to comprehend those terms and conditions which are too complex for a novice to understand. A lawyer also comes in when notarizing the document.

Can a Power of Attorney be revoked if the Principal is incompetent?

Unless the POA is revoked correctly, the Agent can continue to act on behalf of the Principal legally. To cancel the POA, the Principal can create a Revocation of POA document or draft a new POA stating that the initial POA has been revoked. As the Principal, you can decide to rescind the POA at any time, even if the POA has a specified end date, as long as you are competent and the Agent is duly notified. Consequently, any third party that the Agent had been previously approved to deal with should be notified of such revocations.

How to Revoke a Power of Attorney (Free Revocation Forms)