A shot list template outlines all the shots required to create a visual narrative. This way, the production crew is aware of the different shots they must take before production begins. A shot list template uses text, sketches, reference images, and color codes to describe the shots. This article will elaborate on what a shot list is, what it entails, and when and how to prepare it.

A shot list is a pre-production document that itemizes all the shots on a specific day, location, or scene.

In addition, it outlines all the requirements, such as camera type, shot size, equipment, angle, etc., needed for each shot listed in the document. The director and the cinematographer prepare the document. Shot lists are not limited to movies/films; they are used in theatre, commercials, and photography shoots.

A shot list is an effective way of staying organized before, during, and after filming. It is vital to have the list before shooting begins to ensure that all the requirements for the different shots are mobilized. Following are a few key importance of it:

The specifics of a shot list vary from one film or shoot to another. However, a shot list template will typically have consistent elements regardless.

Below are the fundamental items of a shot list template:

The shot list template should group the shots based on their respective scenes. The scene should be specified by the scene number obtained from the script. One scene can have multiple shots.

The shot list template should outline the different setups used in the shot. Setups usually stem from repositioning the camera and changing costumes or lighting. Each setup should have a unique identifying number so that similar setups can later be grouped.

You can also indicate the type of shot

The different gears to be used in the shot should be listed. This section can outline the type of cameras and lenses and supporting equipment. Camera supporting gear includes tripod, drone, Dolly, or Steadicam.

The camera angle is a vital element in capturing shots. The shot list template should thus have a section to indicate the camera angle of the subject (actor, prop, or setting) that is focal to the shot. Directors use different camera angles, including eye level, high angle, low angle, tilt/Dutch angle, OTS (over the shoulder), birds-eye view, and POV (point of view).

The shot list template should also indicate how audio (sound and dialogue) will be recorded in a shot. The different options of capturing audio include boom, lav (s), or voiceover (VO).

Lighting is another element that should be communicated to the filming crew through a shot list. Lighting is used to create a theme and as part of visual effects. This section can discuss the type of lighting you want for the shot and the lighting equipment. Lighting can be natural or artificial lighting.

A shot list template should have a section where you mark the status of the shot. This section is used to record the progress and significance of a shot. You should mark every shot once completed. However, some shots are more critical and can thus be marked as “priority” shots to avoid delays.

Each shot is centered around a specific actor, cast (group of actors), prop, or setting. The focal point of the shot is referred to as the subject of the shot. The cast required for each shot should be identified under the shot. This helps in remaining organized, getting actors on set on time, and prepping the actors and the props.

Any VFX (visual effects) required for each shot should be outlined in the shot list template. This section can include short notes before consultations have been made with the VFX coordinator.

The frame rate specifies the speed at which the shot will be captured. It can be described as expected speed, slow motion, or fast.

The location where each scene is taking place should be indicated in the shot list template. Note that shots within a scene can take place in different positions, and the shot list should therefore be specific when describing the location. The template should also show whether the shot will take place at interior or an exterior location and if it were filmed during the day or at night.

Prepping for each shot will take time; some shots will take longer to set up and reset than others. The shot list template should therefore indicate the estimated prep time for each shot to ensure an efficient shooting schedule is created to avoid delays. Determining the prep time is typically a collaborative effort. Therefore, you should consult department heads such as set designer, costume designer, lighting, camera crew, etc., to ensure you get an informed estimate from each department.

The shot list template should have a section to record the time required to shoot each shot—the shoot time factors in the time taken to capture the needed number of shots. For example, for a 20-seconds shot that requires at least four takes, its shoot time will be 80 seconds.

It is crucial to consider the time needed to prepare for a shot and film it. This time represents the total time estimate for the shot. Therefore, it can be determined by adding the prep time and the shoot time for each shot. In addition, this time is used to plan the filming days to ensure activities are rationally distributed throughout the filming period.

The shot list should indicate when the camera setup should be changed. The camera setup involves changing the lens or repositioning it. Indicating the points at which each camera setup will be changed can help the camera crew prepare ahead to save time in between shots. You can also record which camera will be used for each shot in this section.

A good shot list template should have a section where you can write down notes for each scene or shot. Notes can be written by the AD (assistant director) to be discussed during progress meetings for each department.

Color coding is another technique used to distinguish shots by scene, location, actor, or setup. The template should show what each color code used in the shot list represents. This makes it easier for the film crew and editors to understand the shot list.

All the cast members involved in each shot should be listed in the template. The cast can be described by their character names and actual names to simplify the crew to identify them.

The shot list should have a column where you can indicate the best takes from each scene or location. The timecode of each best take should also be recorded to help the editors trace it.

You can use a template to create a shot list. Since most shot lists will often include the same components, using a template can be time-saving. Also, shot list templates like those provided here cover all the essential elements of a shot list, thus saving you the worry of leaving out an important item. The readers can download the templates at no charge. The templates are customizable and can thus be modified to fit other user-specific requirements. 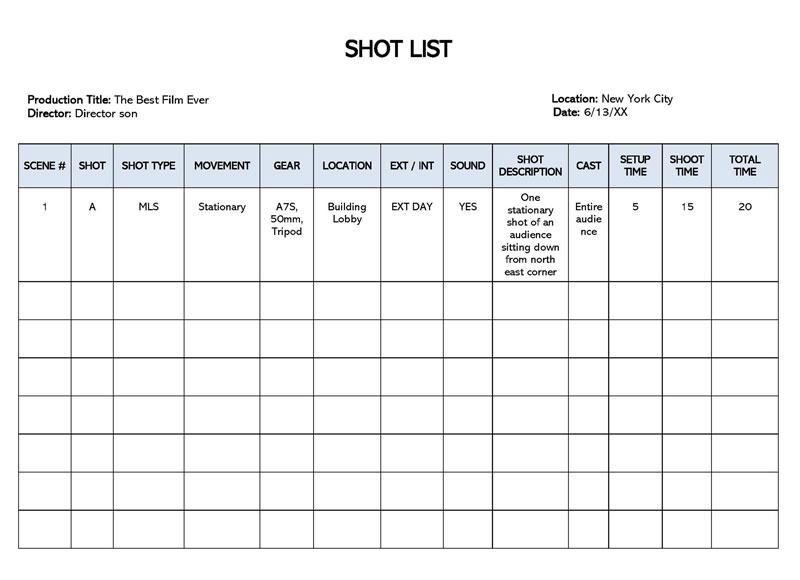 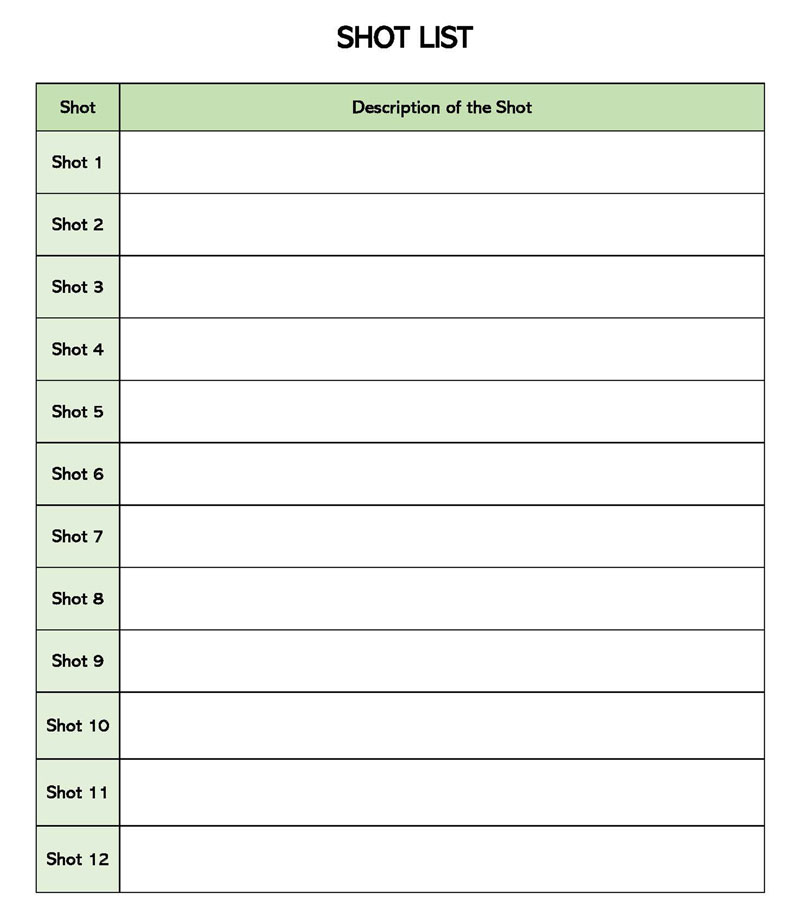 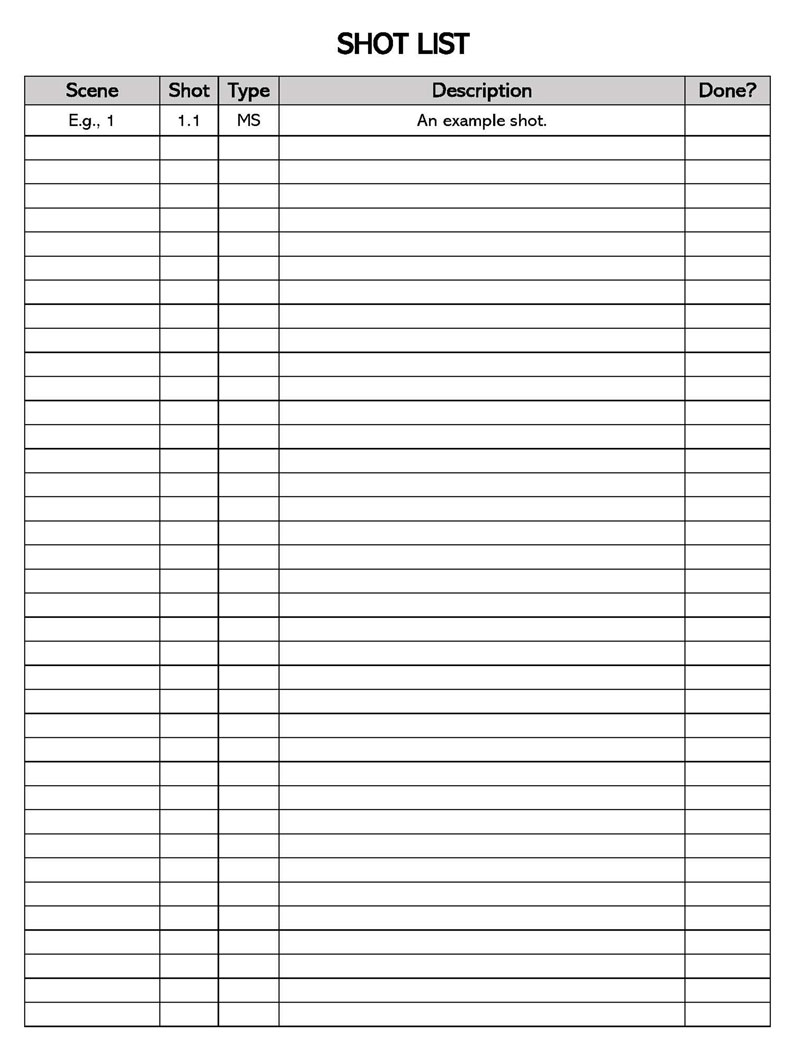 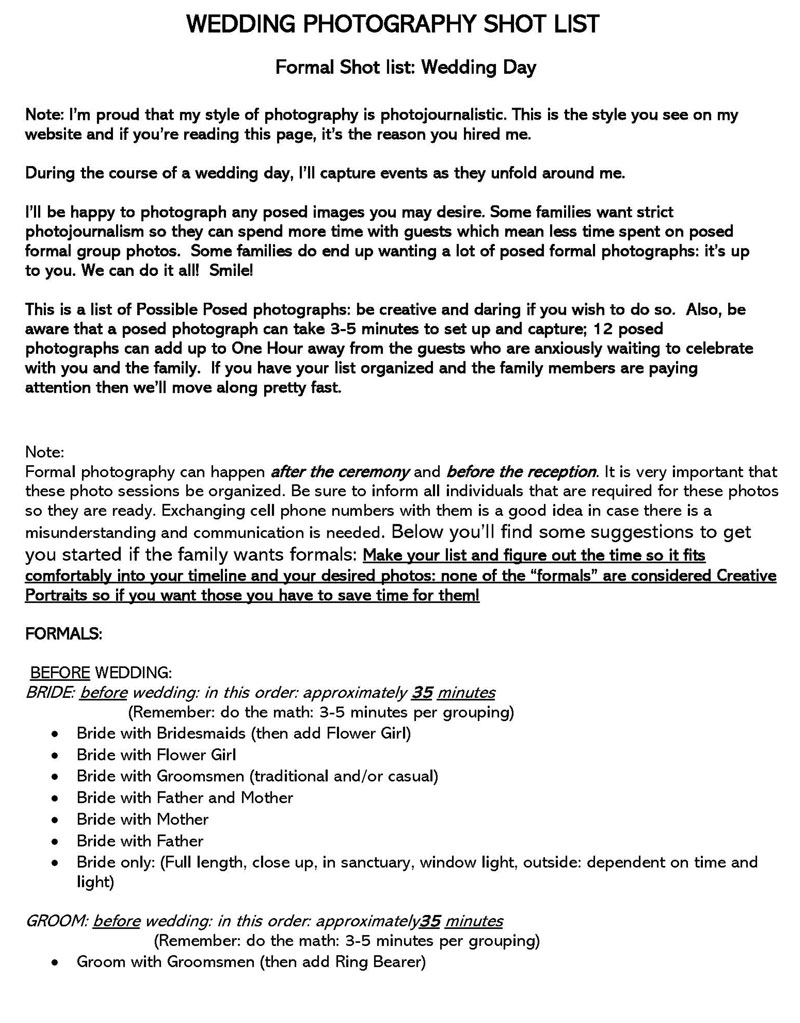 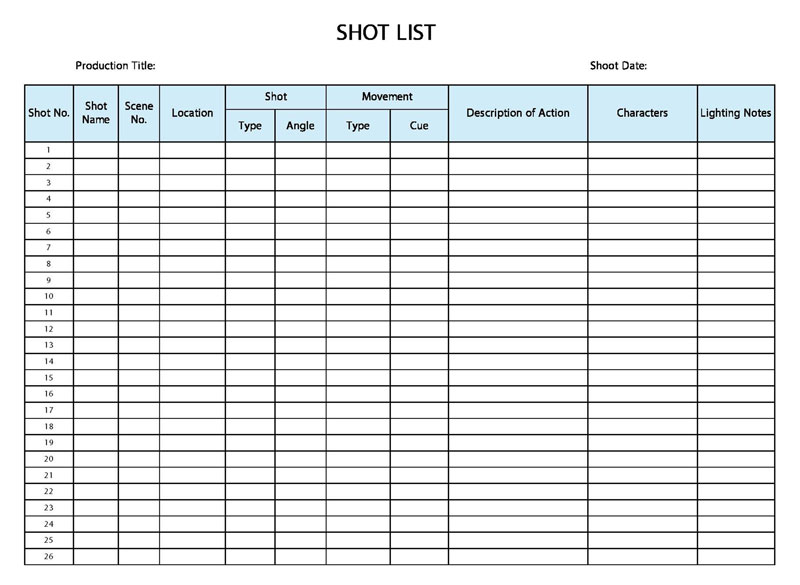 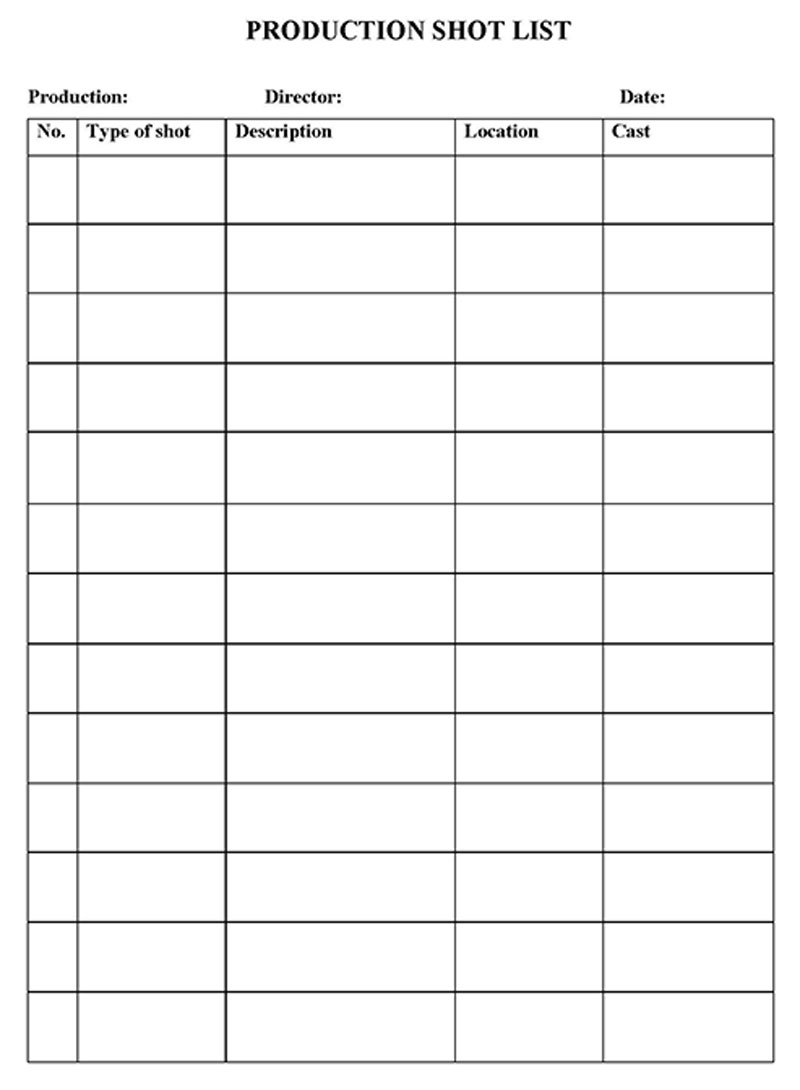 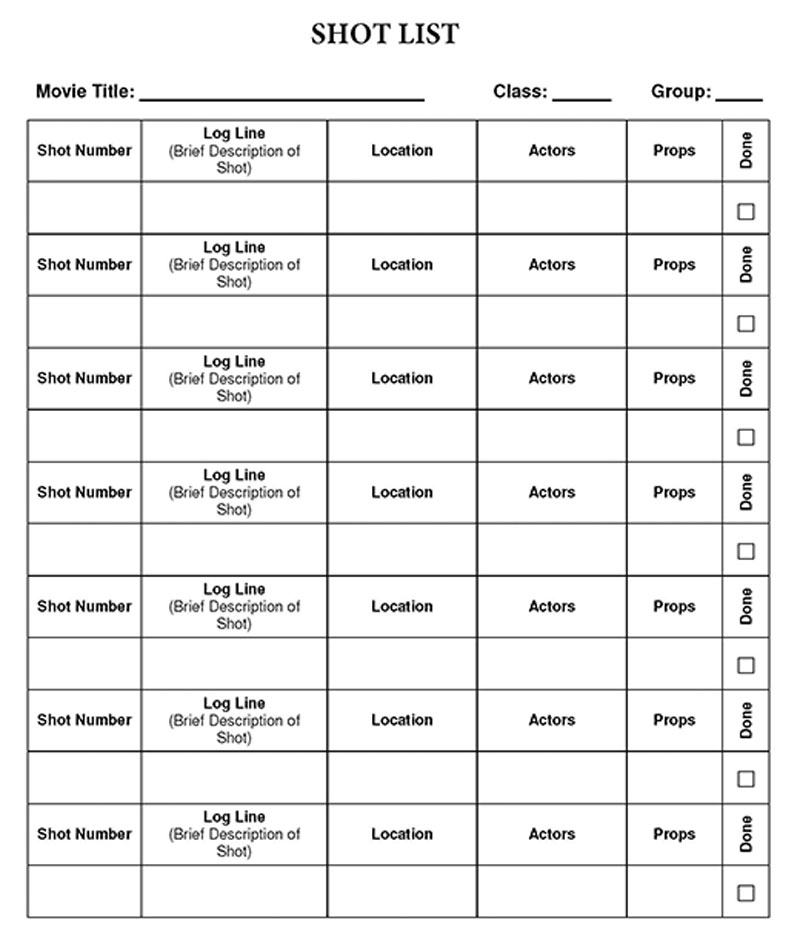 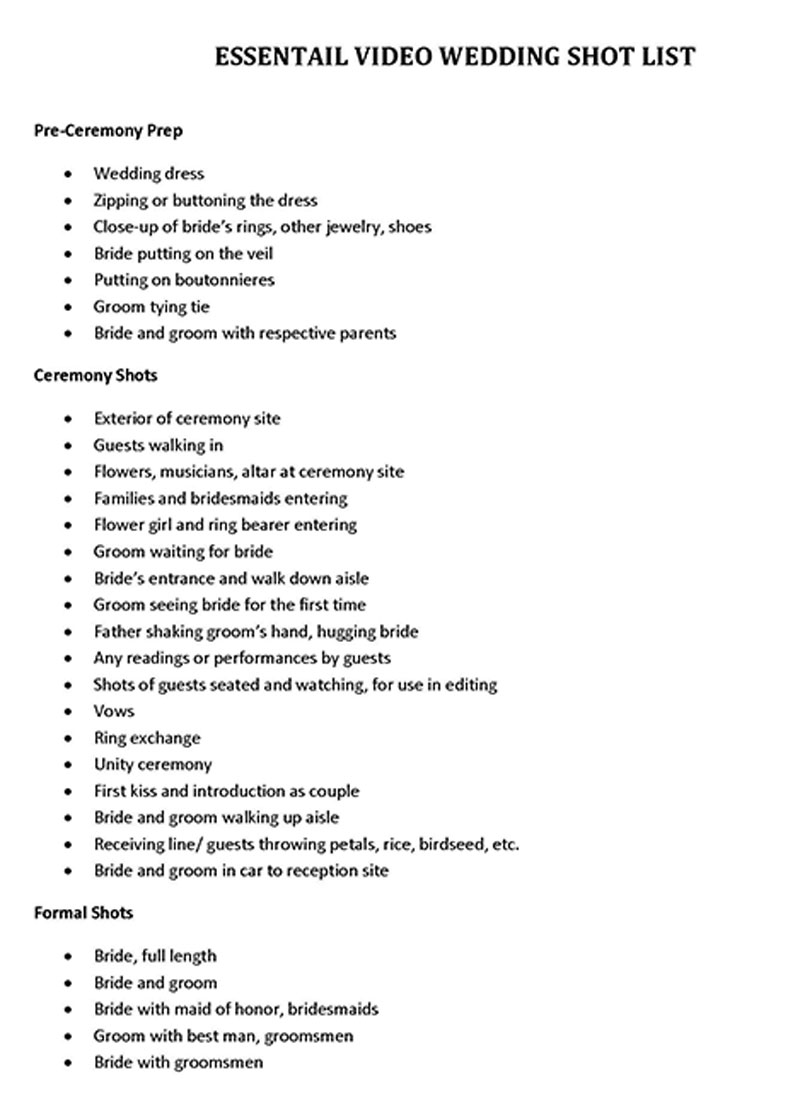 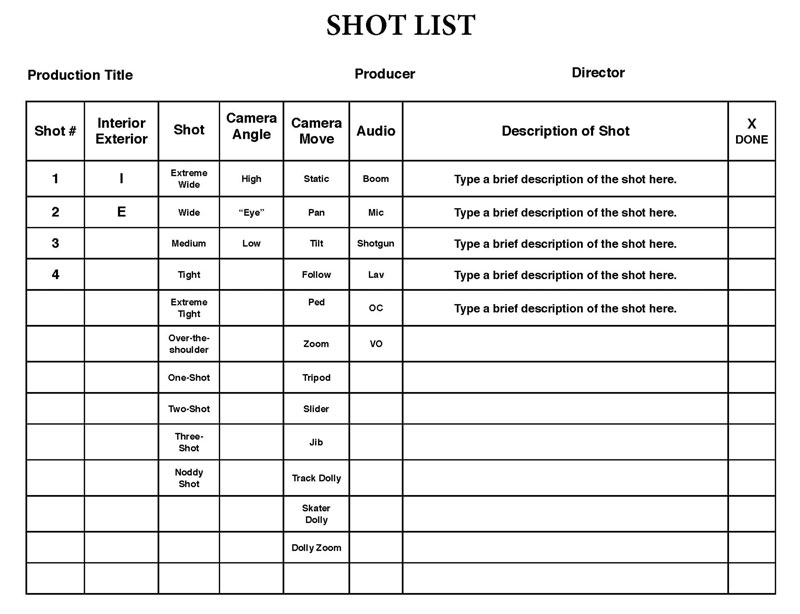 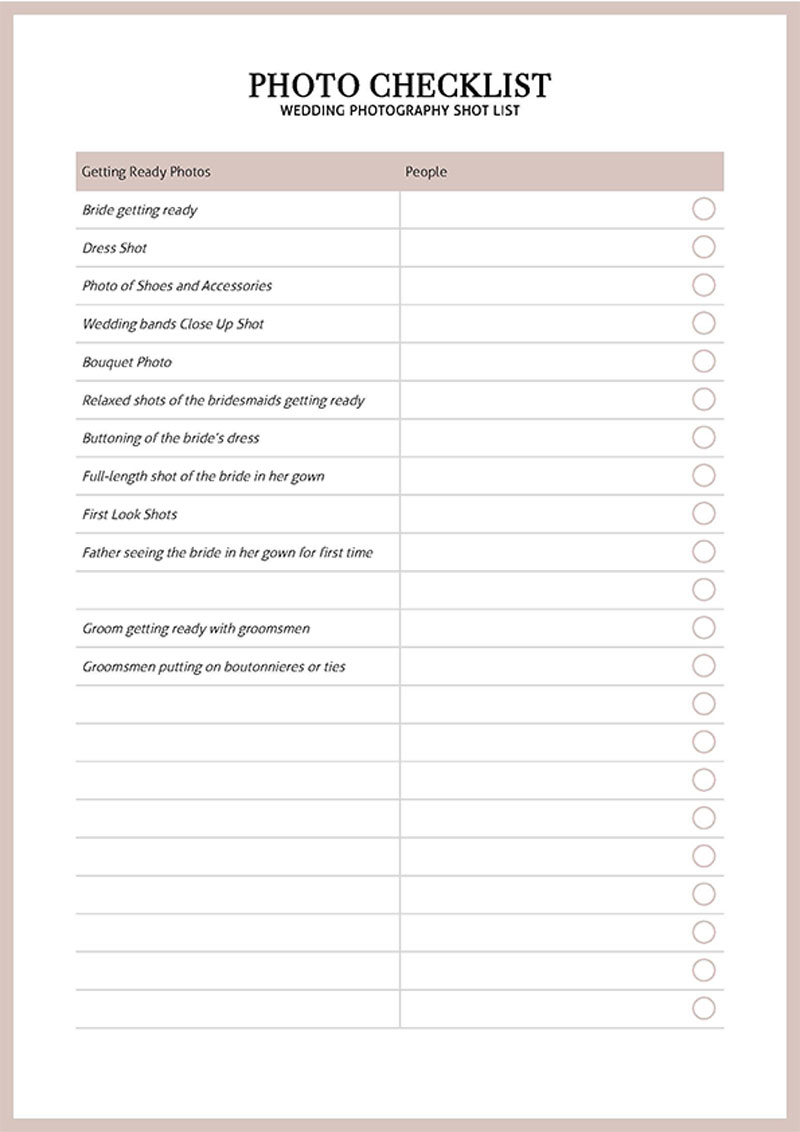 When and How to Make it?

A shot list is an effective way of getting everyone involved during filming on the same page. The document can be used in both substantial blockbuster movies and short films. Therefore, knowing when and how a shot list template is created is crucial if you are in the film production industry.

A shot list is created once you have selected your story or script. The document should thus be crafted as you prepare your storyboard before production begins. As filming continues, you can modify the shot list to cope with changes in production. You can add notes in the shot list detailing essential points you want to bring to the attention of the filming crew and editors.

A good shot list should be easy to interpret. You, therefore, have to be transparent on what you want to be done in every shot. You can abide by the steps given below to develop an effective shot list template.

Picking and designing your shots

Your first action should be to select and visualize your shots. This can be done in collaboration with the respective director of photography. Often, the conceptualization stage will take the most time. However, it saves you time going forward into production if done correctly.

Organizing and scheduling those shots

A shot list is inevitable in film production. Knowing how to create and interpret the shot list helps you carry out your assigned role on set. As much as you should strive to craft an excellent shot list template, you should keep in mind that the document is subject to adjustments, and some things can go slightly wrong, and this does not imply your shot list failed. Always keep in mind film production relies on several moving parts, and unforeseen setbacks are inevitable.

A shot list template does not always have to be too detailed. However, you should be able to assess the situation and determine what information will be necessary to guide the filming crew and modify the shot list to meet your specific needs.

The Only Baby Essentials Checklist You Need (Free Templates)