An Affidavit of Identity is an official legal document that verifies someone’s identity and affirms that someone is who they say they are. Institutions such as courts, banks, etc., often require an individual to verify their signature or identity for specific transactions.

Due to rising concerns about fraud and identity theft cases, a person’s word is not always considered sufficient for certain transactions. An Affidavit of Identity can be used as legal proof that a person is who they claim to be if all the necessary steps to establish proof of Identity are followed correctly.

The proof of identity document contains the person’s personal and identifiable information, including legal name, date of birth, and home address.

Further, the individual is asked to swear that the information provided is true and accurate. You will also need to have the document witnessed, signed, and sealed by a notary public.

The alternative names of an Affidavit of Identity include:

Several situations may force an individual to have an Identity Affidavit. Below are some examples of such instances:

In a situation where someone is a victim of identity theft, a Notarized Affidavit of Identity might be used in the following circumstances:

Since an Identity Affidavit is required and used in various circumstances, you can expect most institutions to specify to you and notify you of the specific transactions and events that require presenting the document.

Consequences of Not Having the Affidavit

An affidavit of Identity aims at authenticating a person’s identity and verifying their signature. Not having one can result in a lack of confidence in either an individual’s identity or a signature’s legitimacy. This, in turn, results in having certain essential transactions being blocked, meaning that one cannot accomplish the services listed below:

File a claim of stolen identity

If one does not have an Affidavit of Identity, one cannot file a stolen identity claim because most government agencies, including the IRS and the law enforcement agencies, will doubt the claim’s legitimacy and credibility. The same applies to creditors.

If an individual is unwilling to complete an affidavit of Identity, one cannot access the account. Usually, banks and any other financial institutions rely heavily on verification through a person’s legal name and signature, along with the government-issued identification form when giving account holders access to their bank accounts. In the long run, this is for everybody’s protection against fraud and identity theft.

File to run for office

Without a notarized Affidavit of Identity, one cannot file to run for office in most jurisdictions. A government’s interest is not served when run by people who are using fake identities. Many states require identity verification from any candidate who aspires to run for elected office for citizen’s safety and security.

If one does not have an Affidavit of Identity, one cannot obtain a bank mortgage. This is for security purposes because bank’s interests are not served by loaning people with fake identities large amounts of money in the form of a mortgage. Having a legal proof of identity document is an essential component of obtaining a mortgage at any given time.

Without an affidavit of Identity, a person cannot participate in certain lawsuits and court proceedings including, adoption, personal injury lawsuits, and divorce hearings. Courts must be guaranteed of the identities of the parties involved before court proceedings begin.

Failure to present an identity affidavit may prevent one from taking part in certain business transactions, including borrowing money from creditors and financial institutions, renting heavy machinery and equipment from a business owner or obtaining land title deeds from Title companies. This protects the business owners from possible fraudulent representations and assures them that they will locate the renter/ borrower, sue them for any damages or file a police report against the individual if they fail to meet all the agreement’s terms.

Elements of an Affidavit of Identity Form

An affidavit of Identity should comprise of the following essential information:

Other states allow foreign passports and driver’s licenses from Canada and Mexico as acceptable forms of government identification.

The following forms are not considered acceptable forms of government-issued identification:

Occasionally, a signer may not have an acceptable form of identification that authenticates their signature or Identity. In such scenarios, some counties and states allow a Credible Witness Verification in place of the government-issued identification.

However, a credible witness must sign their Affidavit establishing the following facts:

Following are the free customizable templates that can be used as per need: 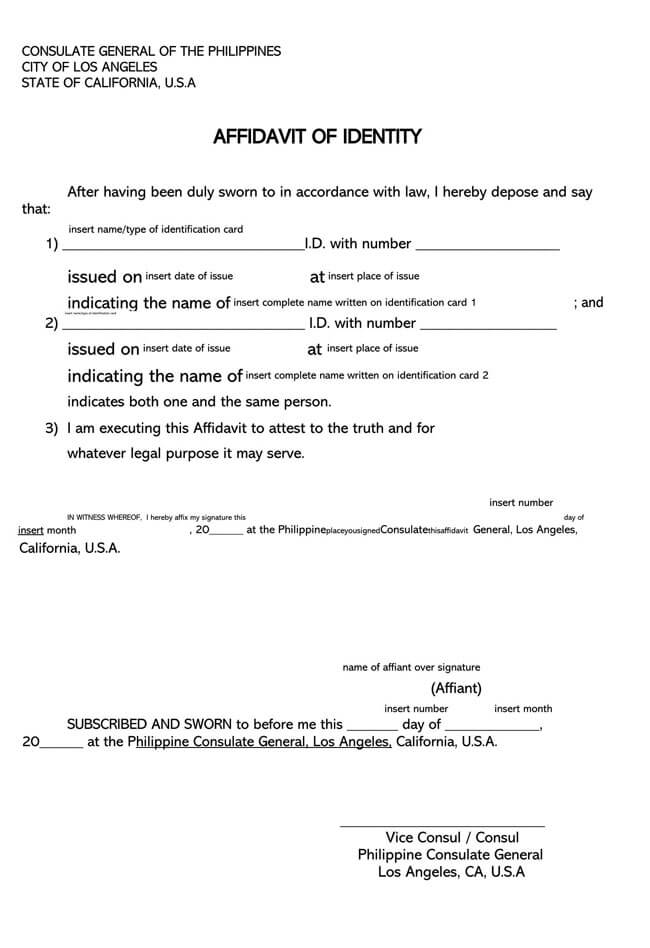 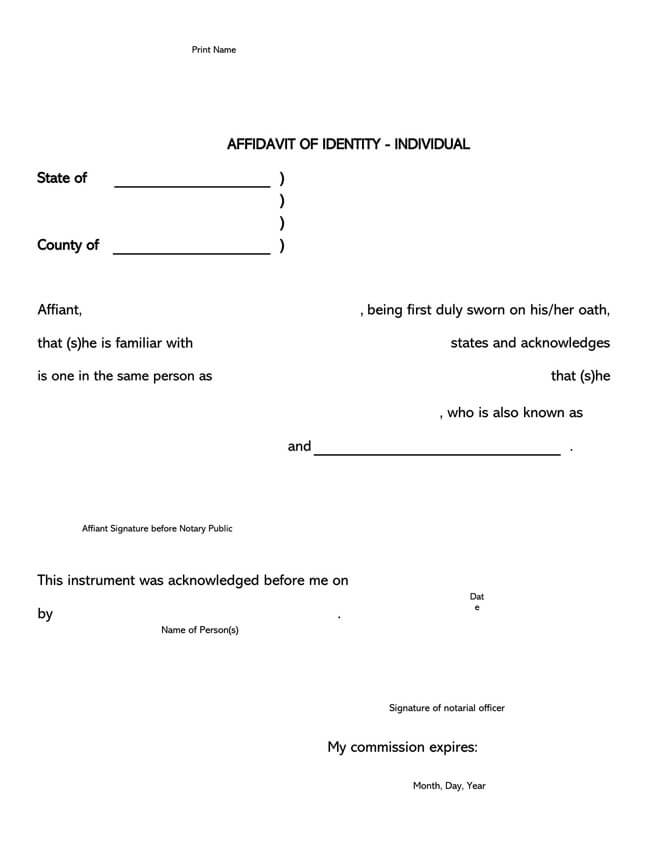 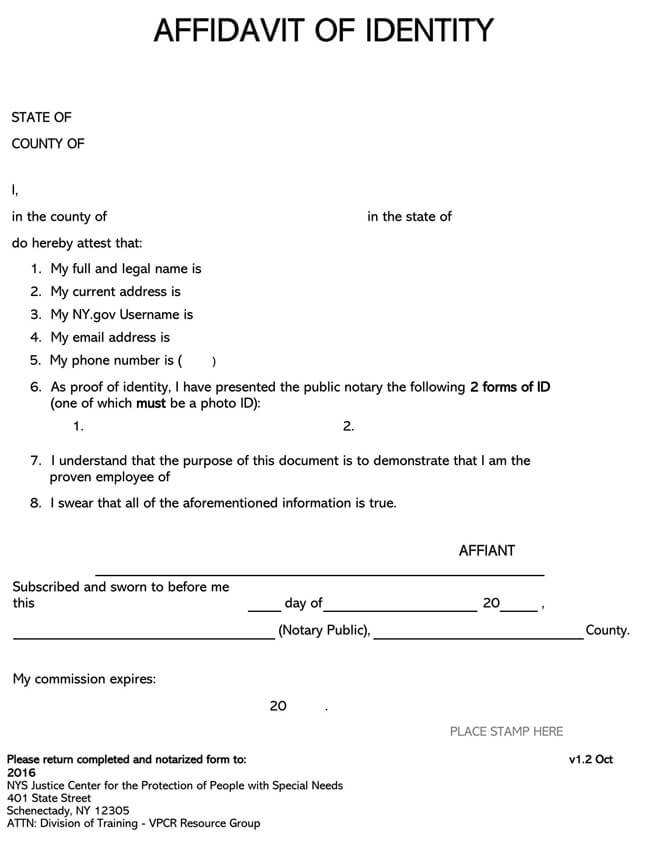 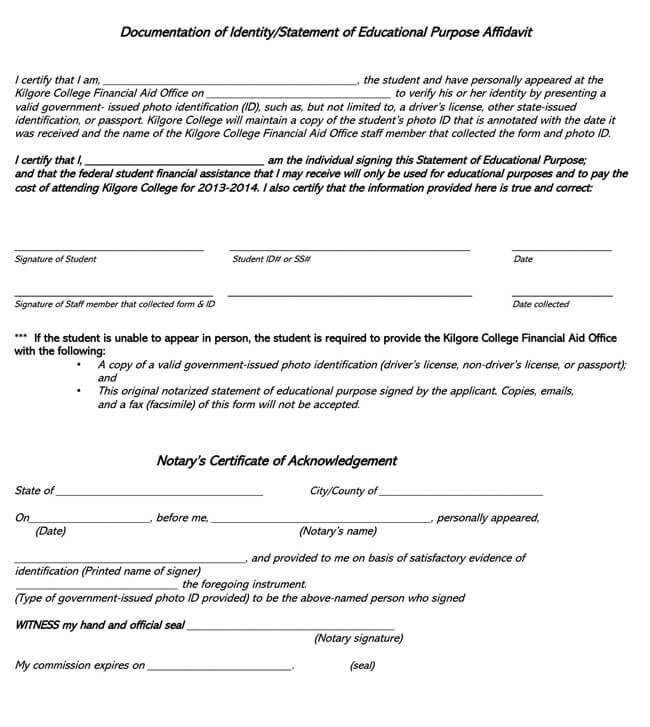 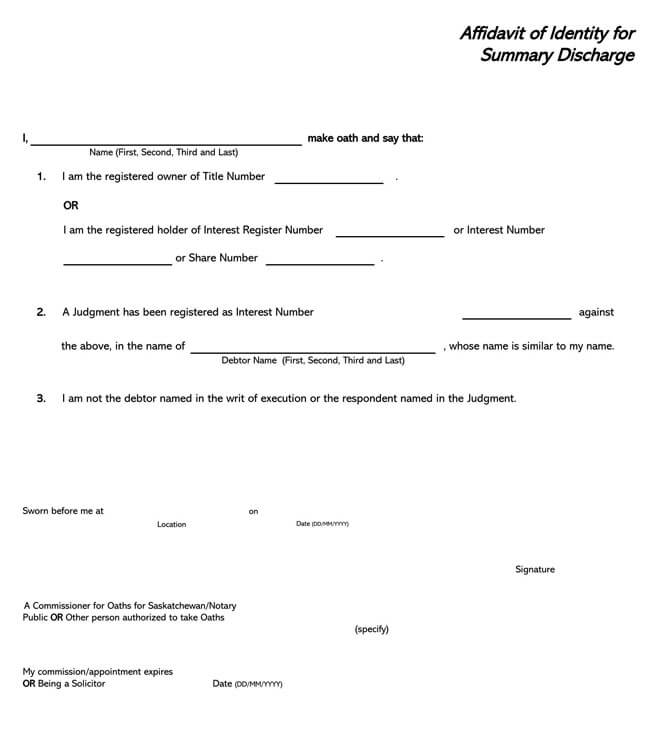 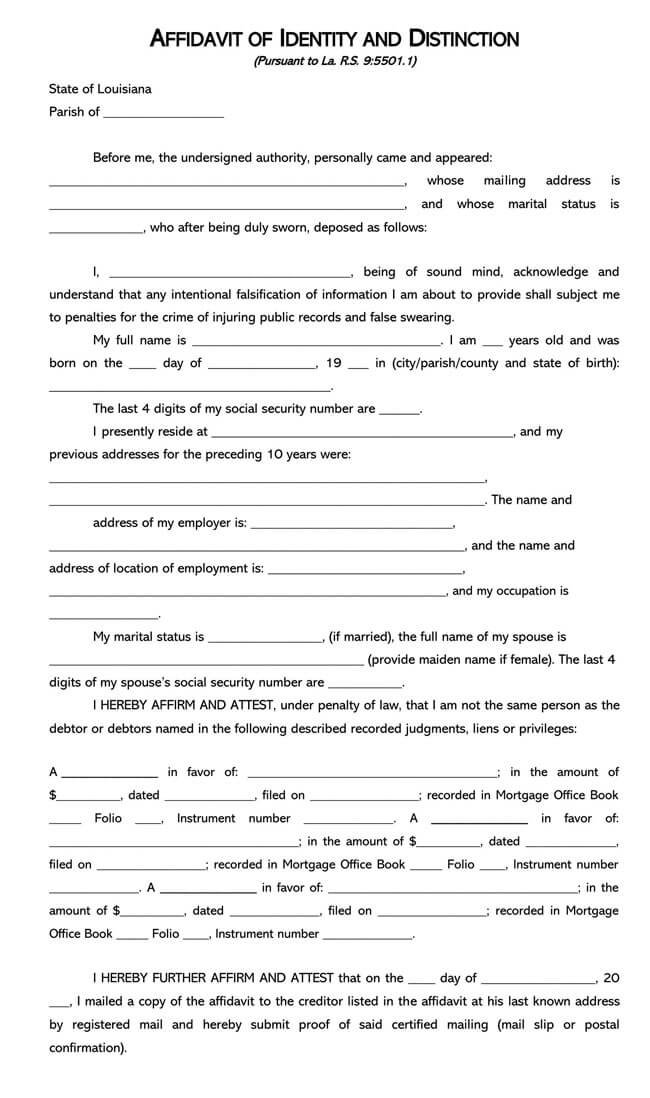 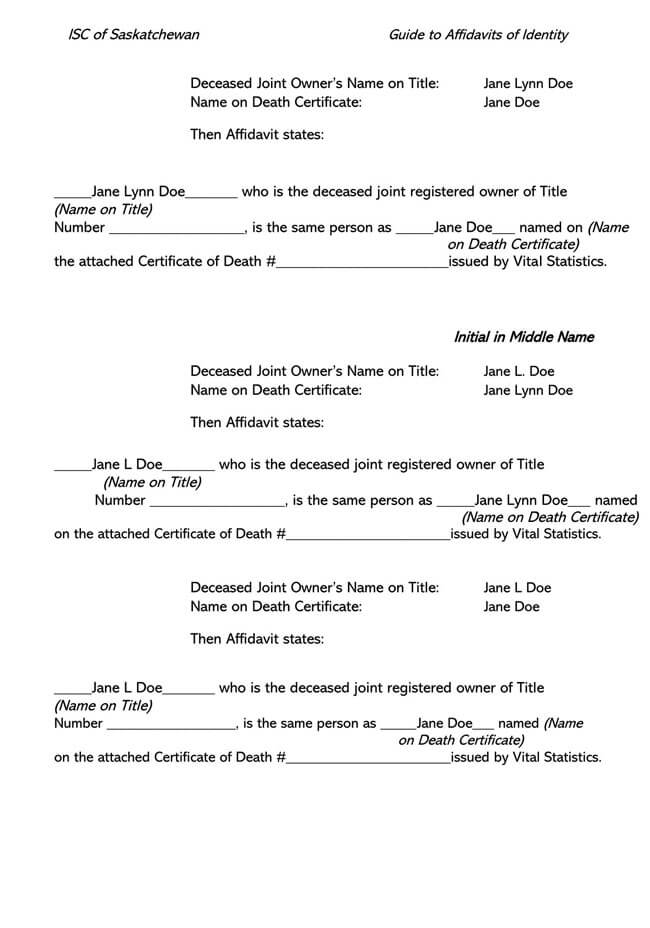 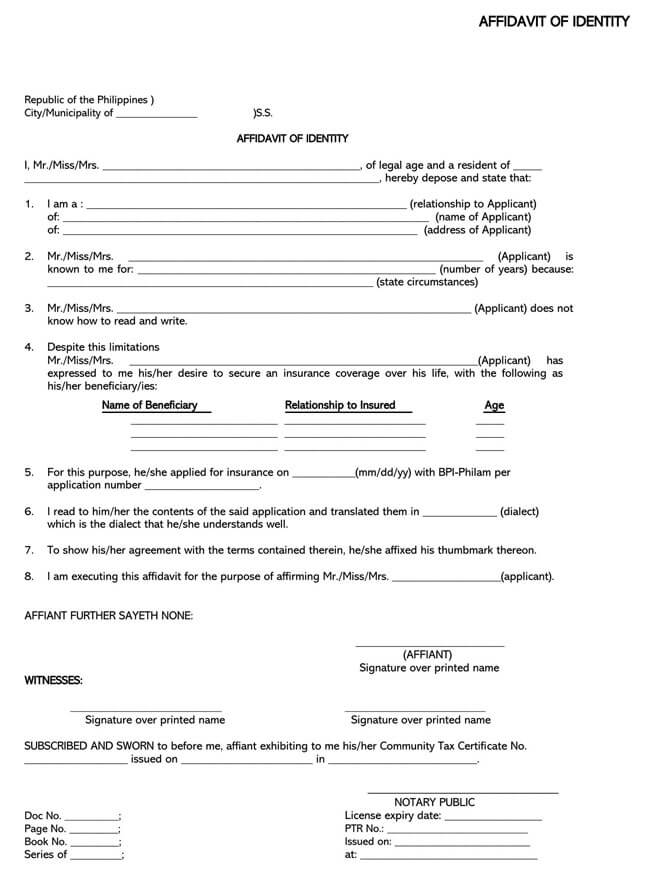 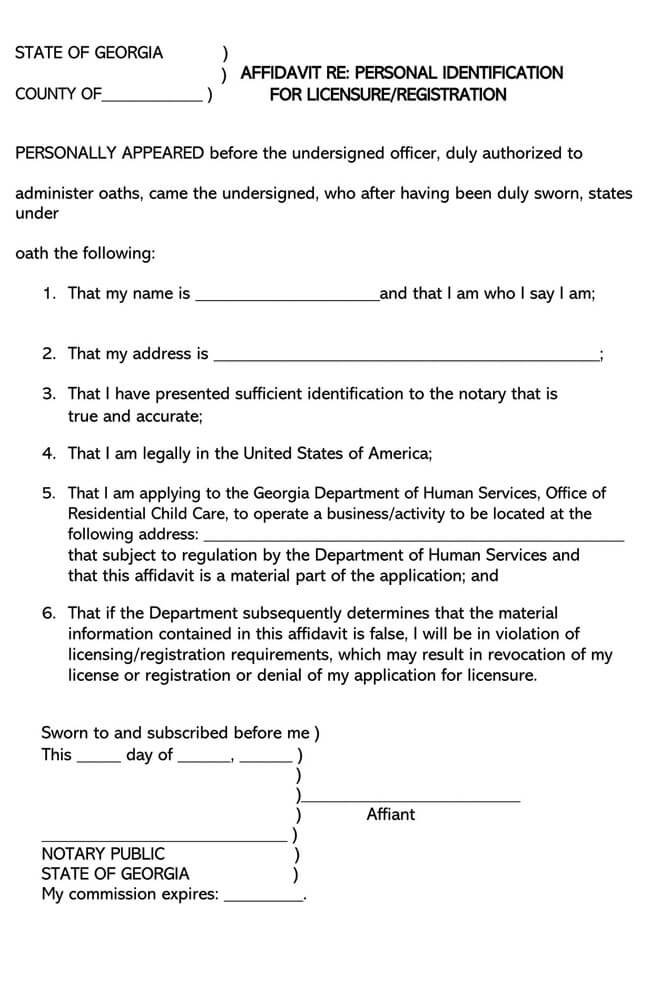 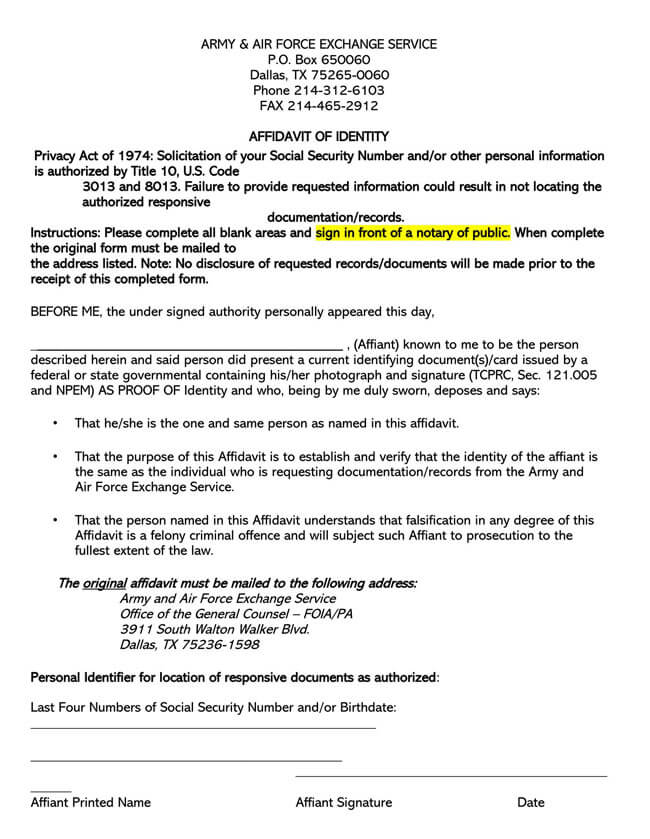 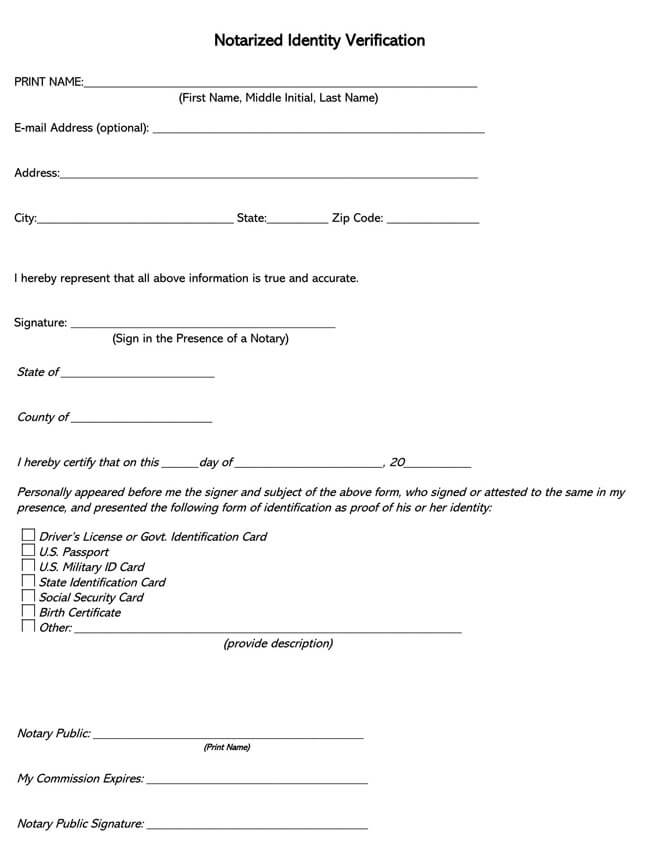 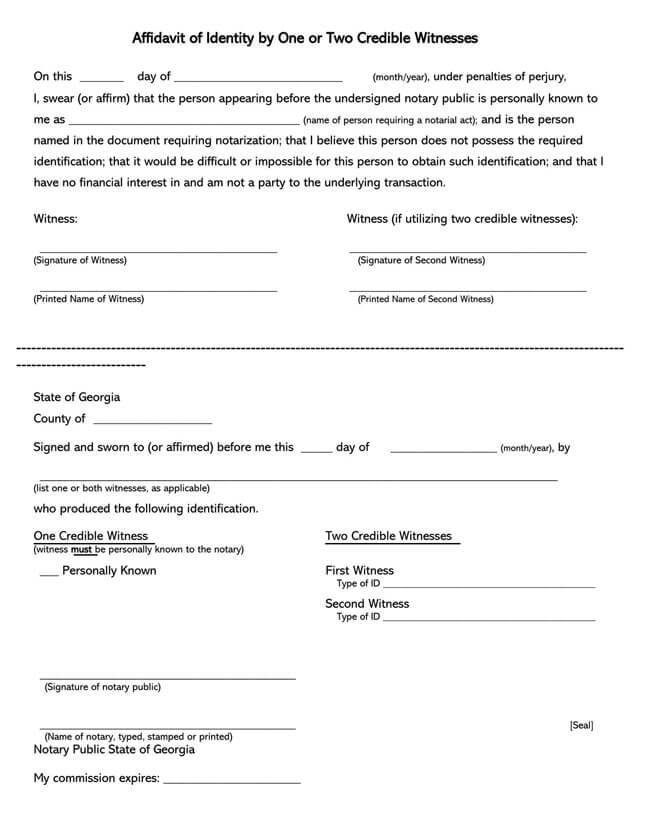 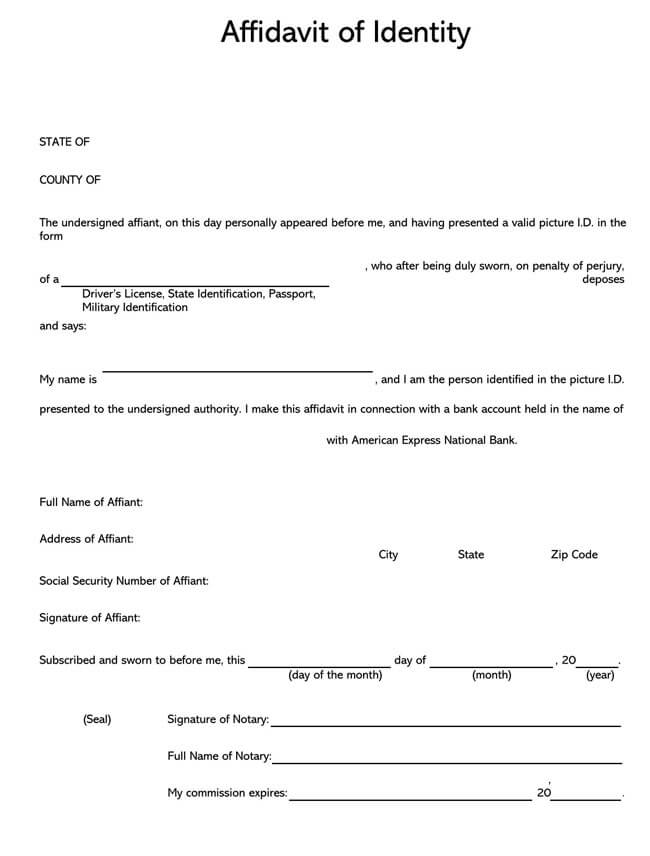 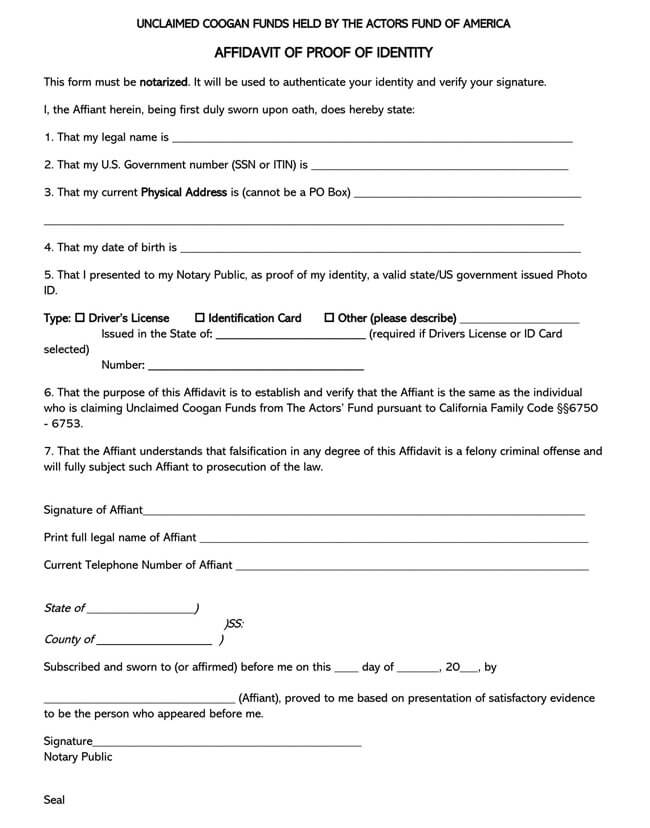 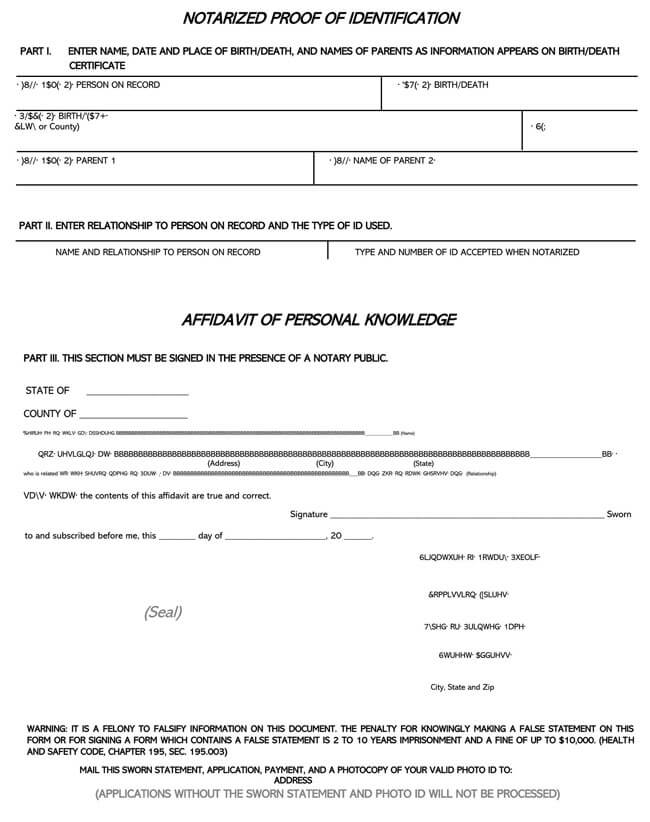 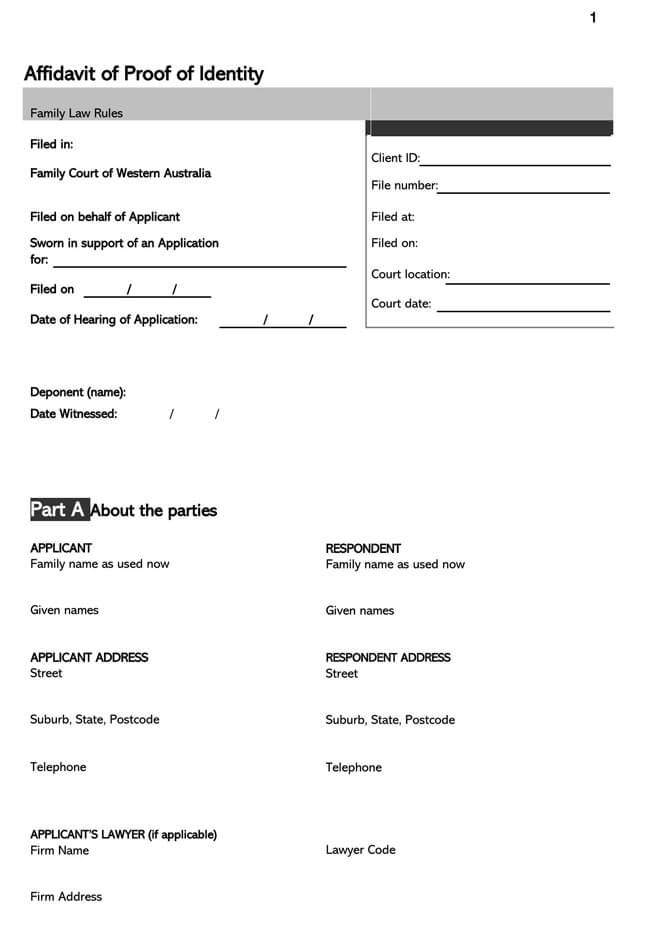 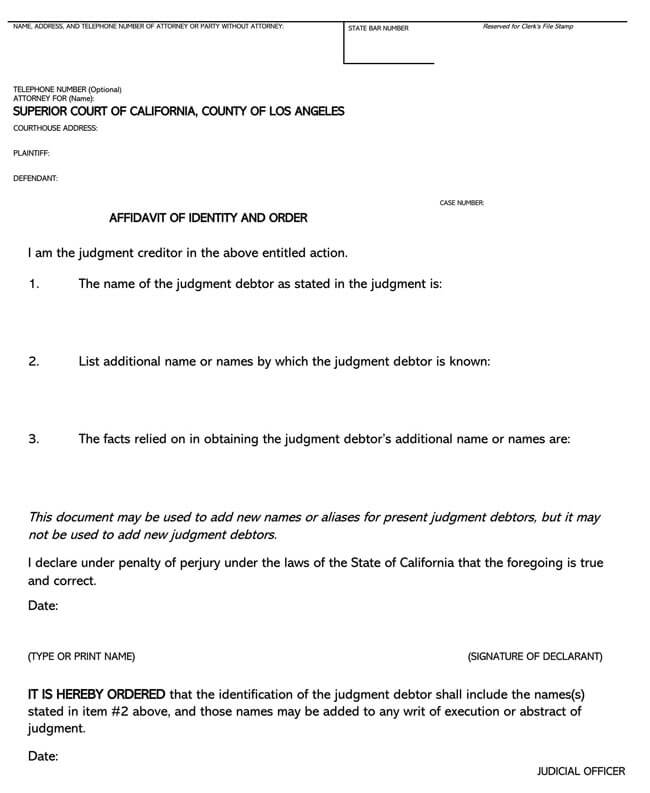 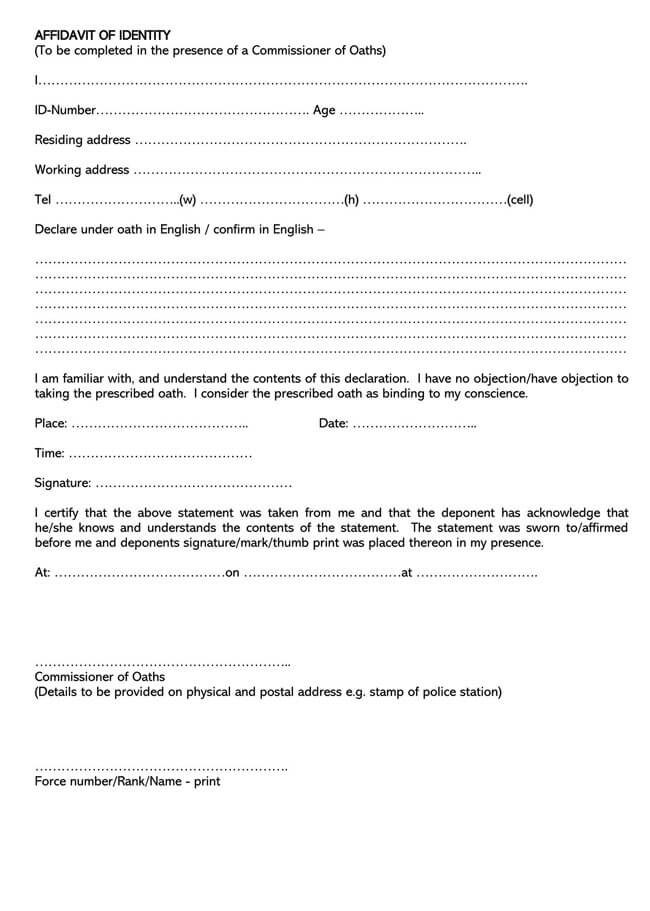 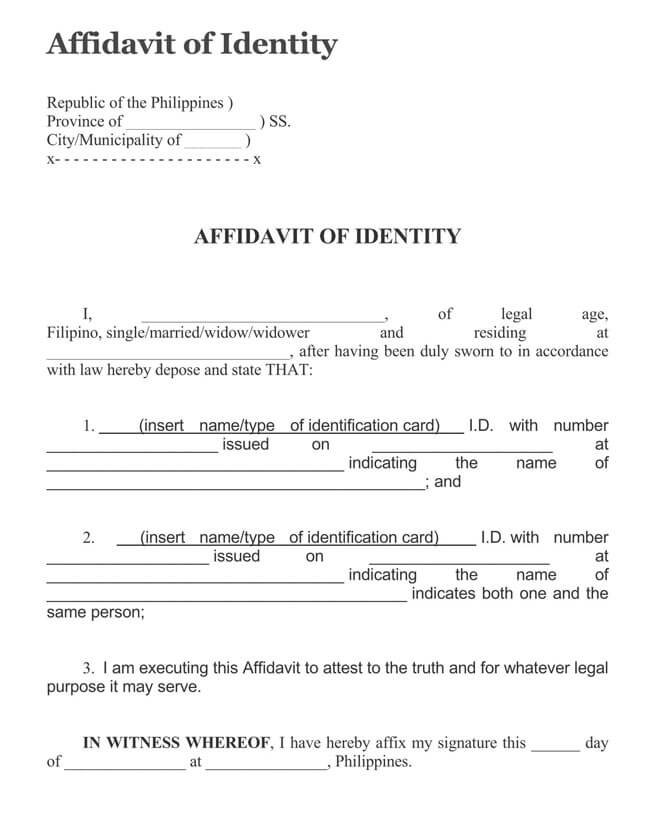 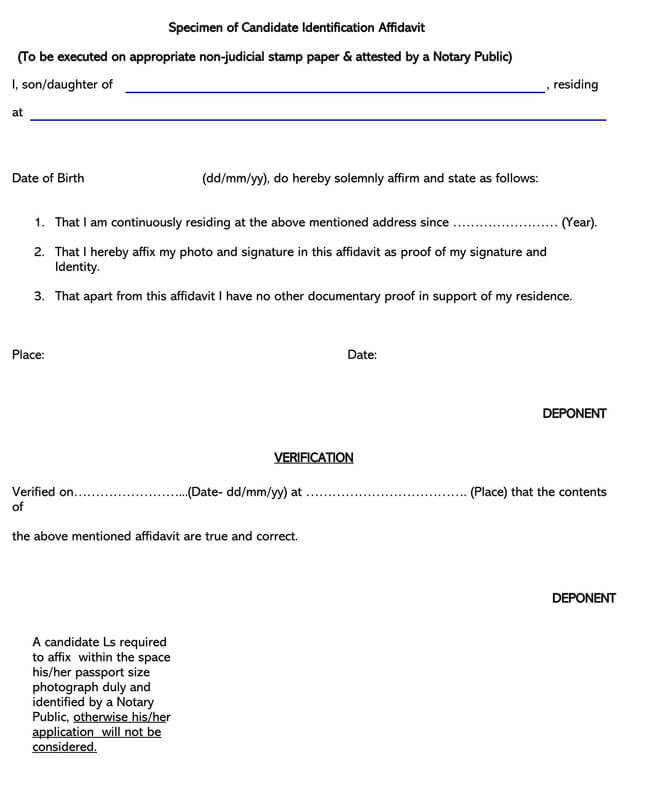 I have lost my driver’s license. Can I use a credible witness to vouch for me?

No. Losing your driver’s license is not a good enough reason to use a credible witness verification. The use of credible witness verification is only applicable in rare circumstances where there is an absolute absence of any acceptable form of government identification. In your case, you can simply take the necessary state requirements of having a new driver’s license issued and use it as an acceptable form of identification.

Why does an Affidavit of Identity include personal information such as the date of birth, address, and social security number?

An Affidavit of Identity aims at verifying one’s signature and Identity. Therefore, including your personal information in the document achieves this purpose. Besides, including distinguishing information such as dates of birth, social security number, and addresses helps separate people with similar first and last names.

Should I fill out the Affidavit of Identity Completely before going to see a notary?

An affidavit of Identity should be signed before a notary public who witnesses the whole process. While filling the document ahead of time is primarily acceptable, signing it should only be done in the presence of a notary public.

Where can I find a notary?

Depending on your state laws regarding Affidavits of Identity, you can find a notary citizen in several places, including the bank, courthouse, City Hall, public library, local police station, mailbox companies, some insurance agencies, among others.
Some institutions such as colleges and universities also offer notary services to their students. This also applies to military officers who act as notaries for members of the military and their dependents.

An Affidavit of Identity is used to prove one’s Identity and signature when requested by a court or any financial institution. The document provides personal and distinguishing information such as the legal name, date of birth, address, and sometimes the four last digits of a person’s social security number. The signer of an affidavit of Identity is often asked to swear that the information given is true and accurate. The signing of the Identity Affidavit must be witnessed, signed, and sealed by a notary public.