Sample Authorization Letter to Sign Documents on My Behalf

As a signatory of different documentation, it is relatively common to find yourself in situations where you have to authorize someone else to sign the documents on your behalf because you’re unavailable to sign the documents yourself. This practice is applicable in most formal situations, such as signing lease agreements, accessing bank account documents, etc. Therefore, in a situation where you want particular documents to be signed in your absence, you can appoint someone through an authorization letter to sign those documents on your behalf.

It can be limited to certain documents within a specific domain in the workplace or at home, such as closing a business transaction, releasing medical records, withdrawing money, or any other circumstances that require your say-so. This article will discuss what is an authorization letter to sign documents and how to create and use it appropriately.

The entire process of having a representative access documents and sign them through an authorization letter involves three parties.

The first or primary party:

The first party is the principal signatory of the document and bears the original rights who transfers the authority to another party for some specific period.

This is the person or entity the first party is dealing with or transacting with. The second party can be a business party, another business, bank, credit card company, etc.

They are also referred to as the authorized party or representative of the first party and assume the authorities assigned to them through the authorization letter.

As earlier stated, an authorization letter to permit someone else to sign documents on your behalf is a formal document and should therefore be formatted and structured as such. Despite the discrepancies between different authorization letters, the fundamental items that ought to appear on the letter are below:

Start the letter by providing a formal header that identifies the sender and the recipient. A header lets the recipient immediately know precisely who is addressing them. The following information should be incorporated in the header:

I, Matt Hannigan, hereby authorize Mrs. Bernice Hannigan to sign all documents associated with my savings account, A/c Number 4255 3792 0002 8333, at Diamond Suite Bank, on my behalf.

After the introduction, get into details in the body of the letter. Discuss all the relevant details the second party ought to be aware such as limitations of the authorization letter and the duration of representation.

You must consider discussing the following information:

Time duration for the authorization: The authorization letter then indicates its effectiveness’s start and end dates. Again, the dates should be precisely indicated, showing the day, month, and year.

Reason for the authorization: You should then state your reasons for appointing a representative to sign documents on your behalf. People are allowed to appoint representatives for a wide variety of reasons such as unavailability due to travels, the urgency of signatures, and as a means of sharing official duties. You can even authorize someone to undertake actions on your behalf as a preparation strategy for unforeseen scenarios such as incapacitation and death.

In addition to signing any due diligence documents, if there are any, Mrs. Hannigan can make withdrawals and deposits to my bank account. However, she shall be limited from accessing the bank statement, which I request be sent directly. This authorization letter shall start on 23/01/20xx and remain effective up to 23/01/20xx. I’m currently unable to avail myself in-person to carry out the specified actions due to my business commitments outside the country.

The following details can be used for verification purposes:

Attached is a copy of their identity card for verification purposes.

The letter can be concluded by appreciating the recipient with a thank you declaration followed by a complimentary close and, finally, signatures. The authorizing and authorized parties should both sign the document. The authorization letter to sign documents should also be witnessed – a notary public will be the most preferred witness. I appreciate your understanding of the circumstances at hand.

Tip: Authorization letters are formal documents and must be typed and not hand-written. Typed documents are legible and have a more professional outlook. The letter also ought to be notarized. The government entrusts a notary public to verify the identity of signatories of documents and establish that the signatories signed willingly without external influence. The authenticity of a notarized letter of authorization to sign documents is less questioned.

The letter can be notarized like shown in the given templates and samples, more so in formal situations where legal ramifications are probable, and the document’s authenticity has to be carefully verified. The notary public acknowledgment statement assures the second party that the authorizing party appointed the authorized party under their own will and not under duress.

I, at this moment, authorize [representative name] to act on my behalf in approving and rejecting matters associated with [application of documents], such as signing any related documents. Singing of other documents such as [list unauthorized documents] shall be directed to me directly.

This authorization letter shall take effect as follows:

I’m designating this responsibility to the named party because [reason for authorization]. For verification purposes, I have attached [mention attached documents]. In addition, provided at the bottom is a sample of their hand-written signature that I can confirm to be of the authorized party.

I can be contacted via (mobile number, email, etc.) to answer any questions or concerns you may have,

Subject: Authorization Letter to Sign Documents on my Behalf

I, (Name) hereby authorize Mr/MS. (Name) to sign all the documents related to my (mention relevant documents here like property located, bank account number etc.) on my behalf excluding the documents (mention documents that are excluded), starting from (Date) till (Date).

Given below is my identity proof with details and signature for the verification purpose:

Given below is identity proof of the person with details and signature for the verification purpose.

Given below is identity proof of the person with details and signature for the verification purpose.

I, Shirley Meyer, authorize my spouse, Dwayne Mason, to undertake any necessary actions required to renew my lease and sign the necessary related documents on my behalf.

He can go as far as negotiating any renewal terms and conditions. However, any billings should be forwarded to me and not Mr. Mason. I’m designating this responsibility as I’m away to attend to personal obligations and hence unable to avail myself in person. This authorization shall take effect between 2/01/20xx and 15/01/20xx.

Attached is a copy of their identification card which can be used to verify their identity. They should produce the original copy before signing any documents.

I confirm that I’m fully aware of Mr. Dwayne conducting the mentioned responsibilities on my behalf and appreciate your consideration. If there would be any queries or concerns, do not hesitate to contact me at 441 5290 94112.

I, Claire Miles, hereby verify that on 2nd January 20xx, the signatories to this document, Shirley Meyer (authorizing party) and Dwayne Mason (authorized party), appeared before me and proved with legal documentation to be the persons mentioned in this document.

I bear witness under penalty of perjury under the laws of the state of Pennsylvania that information is true and valid.

Tip: Legalese, used to refer to the act of appointing another person to sign legally significant documents, is known as procuration – implying the specified party will act as proxy on your behalf with authority given to them. A letter of authorization to sign documents will typically be used when appointing someone for a limited/specific purpose. For example, suppose you award the proxy or agent unlimited power or authority to sign all legal documents on your behalf. In that case, this gives the representative a power of attorney, meaning they can act on your behalf on all legal duties. Therefore, it is best to clarify the duties transferred to the representative in the letter.

Get collection of free sample letters from our site: 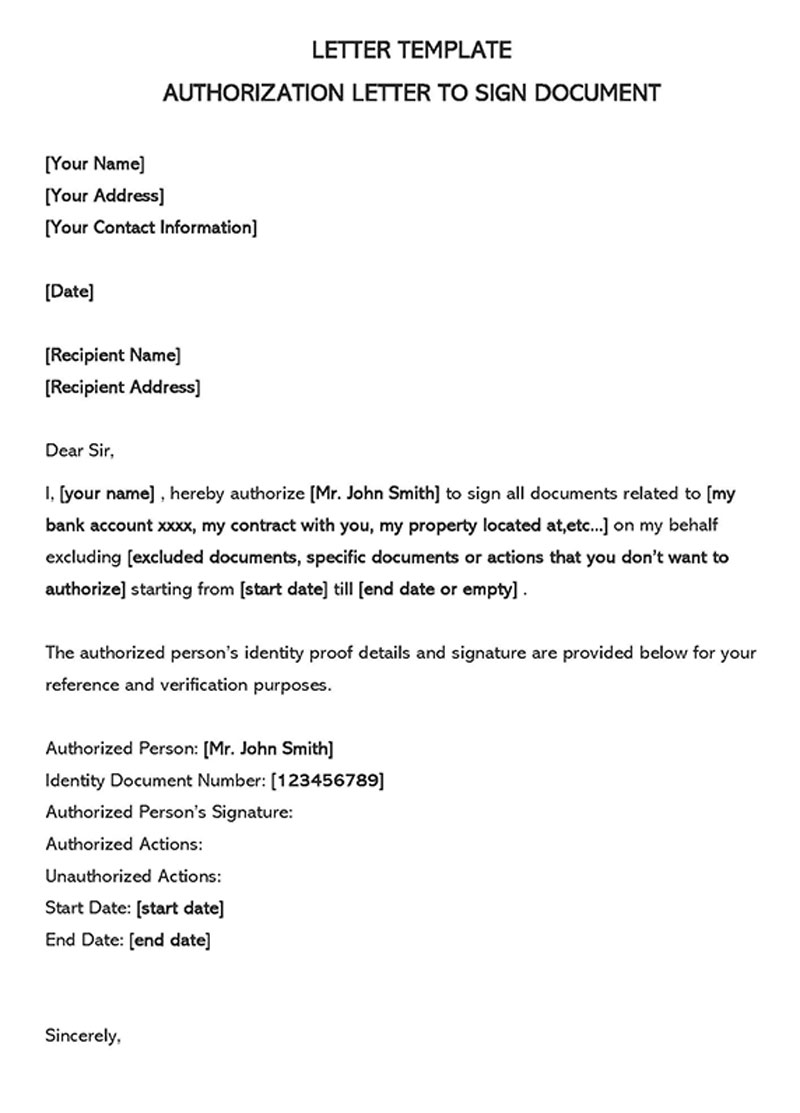 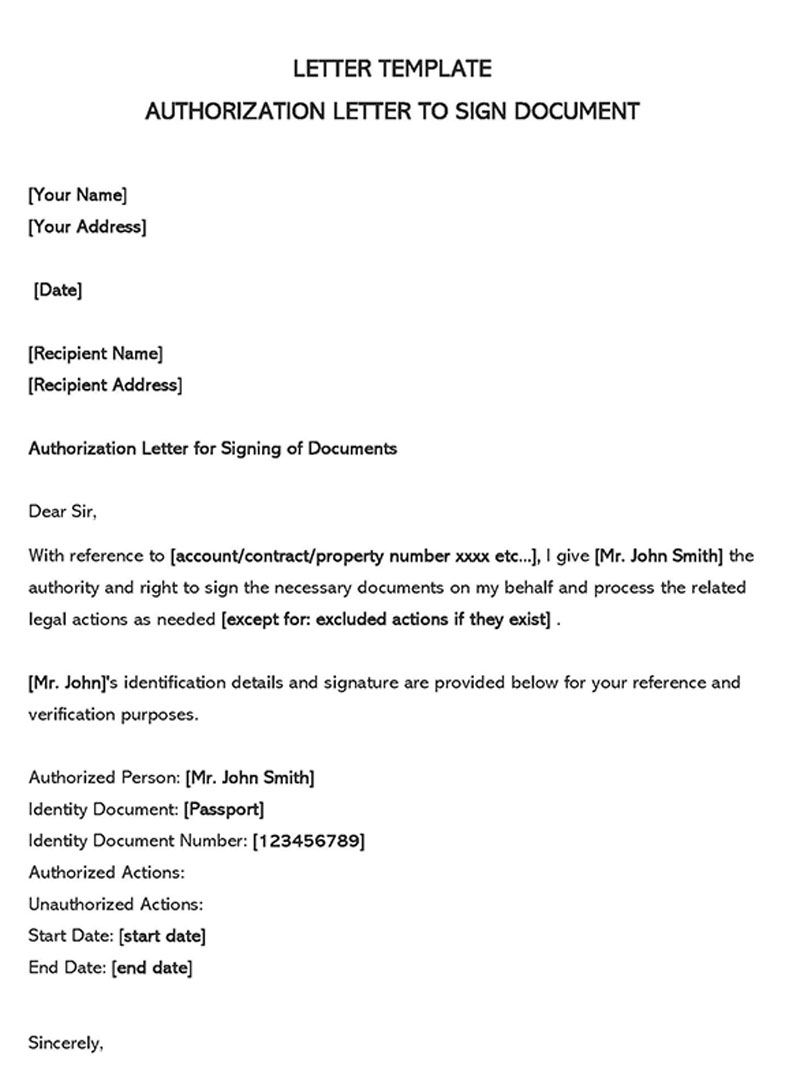 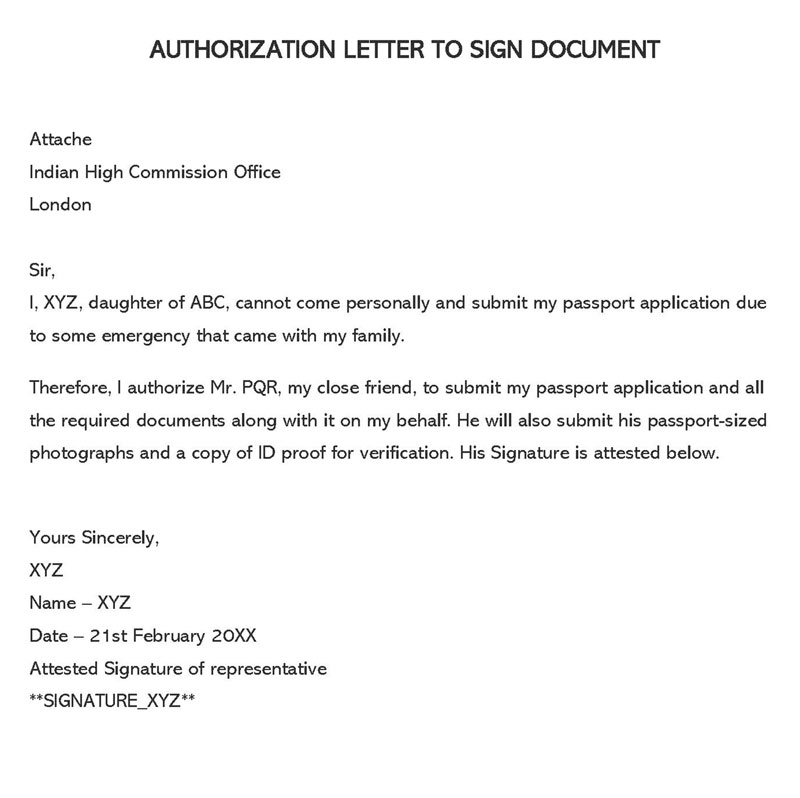 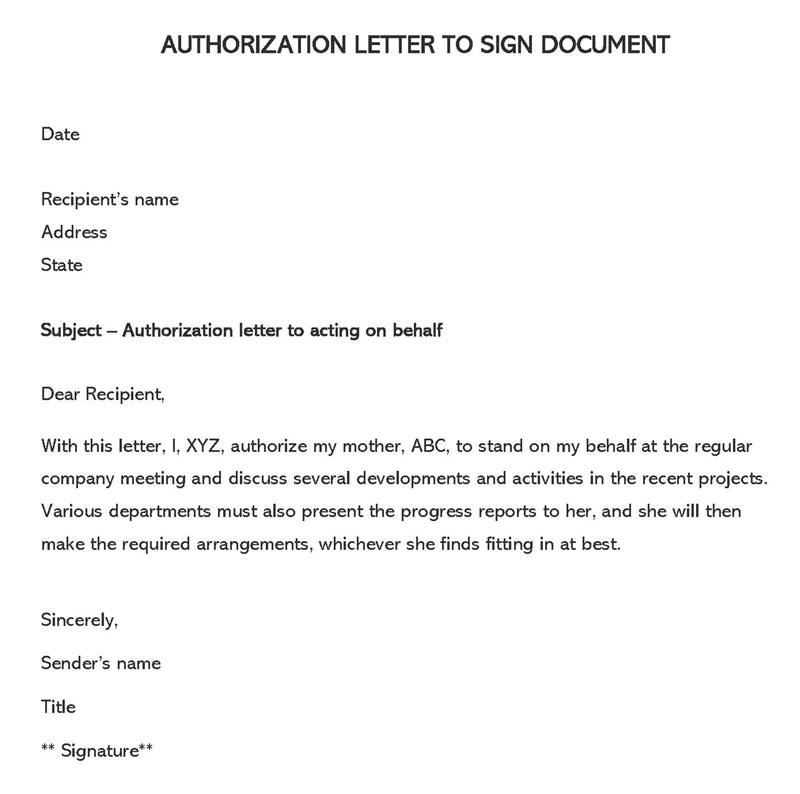 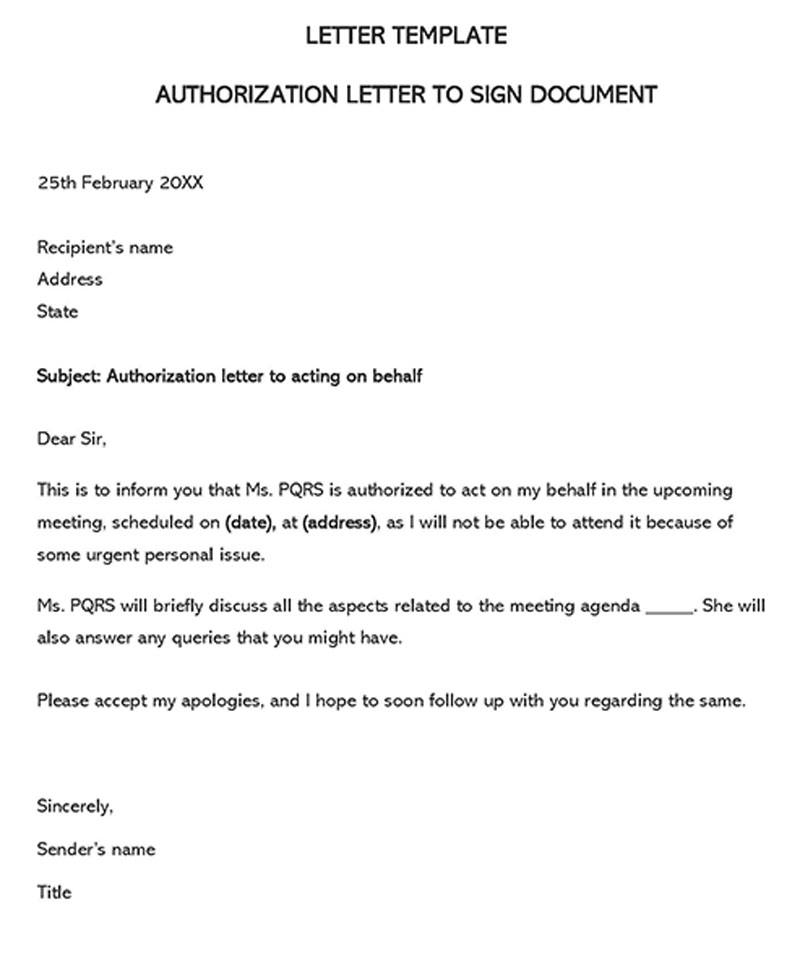 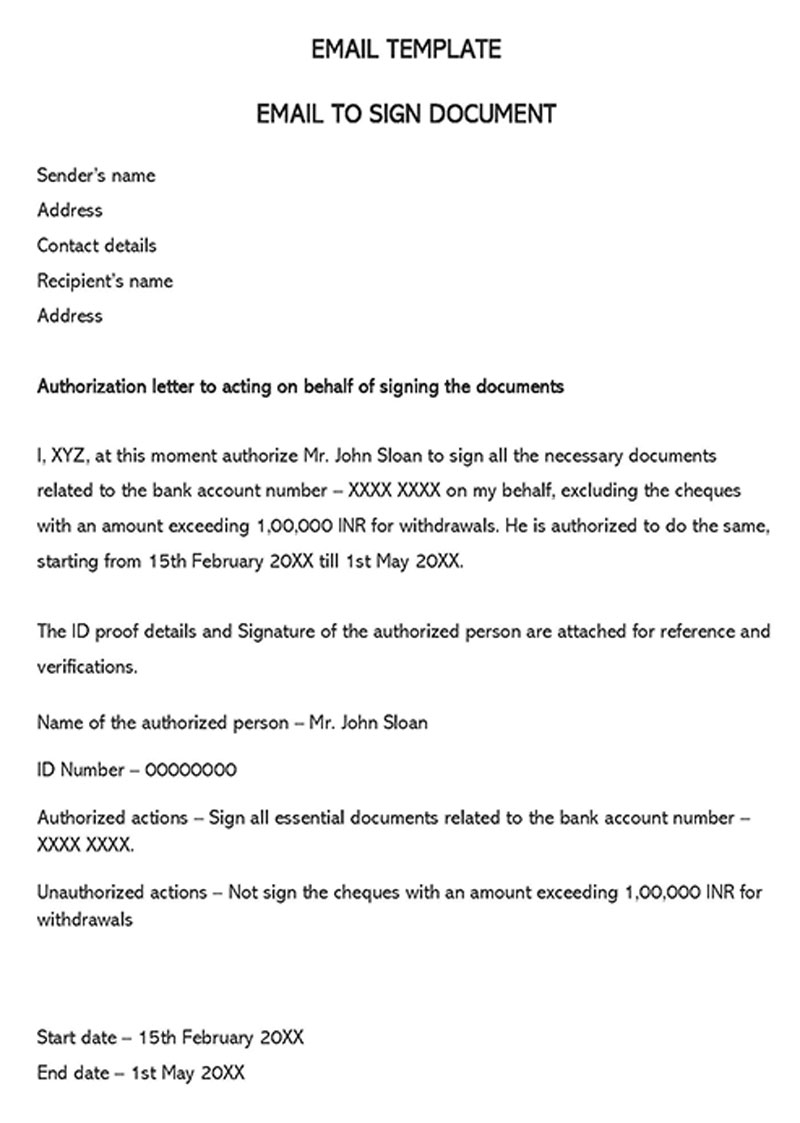 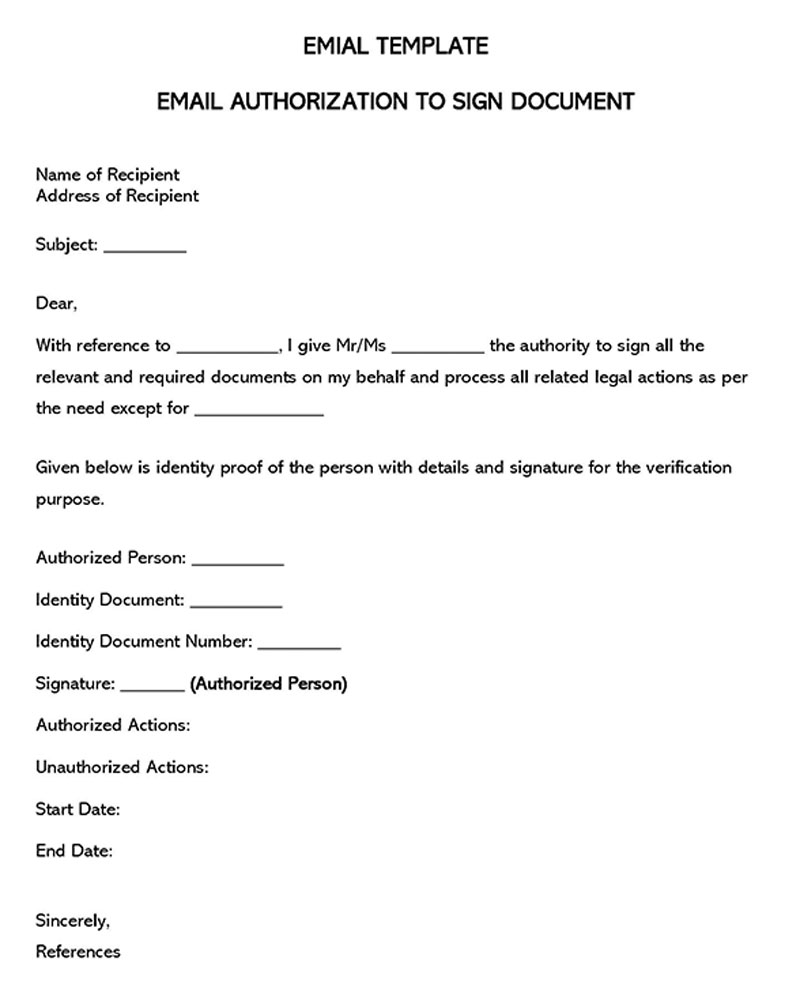 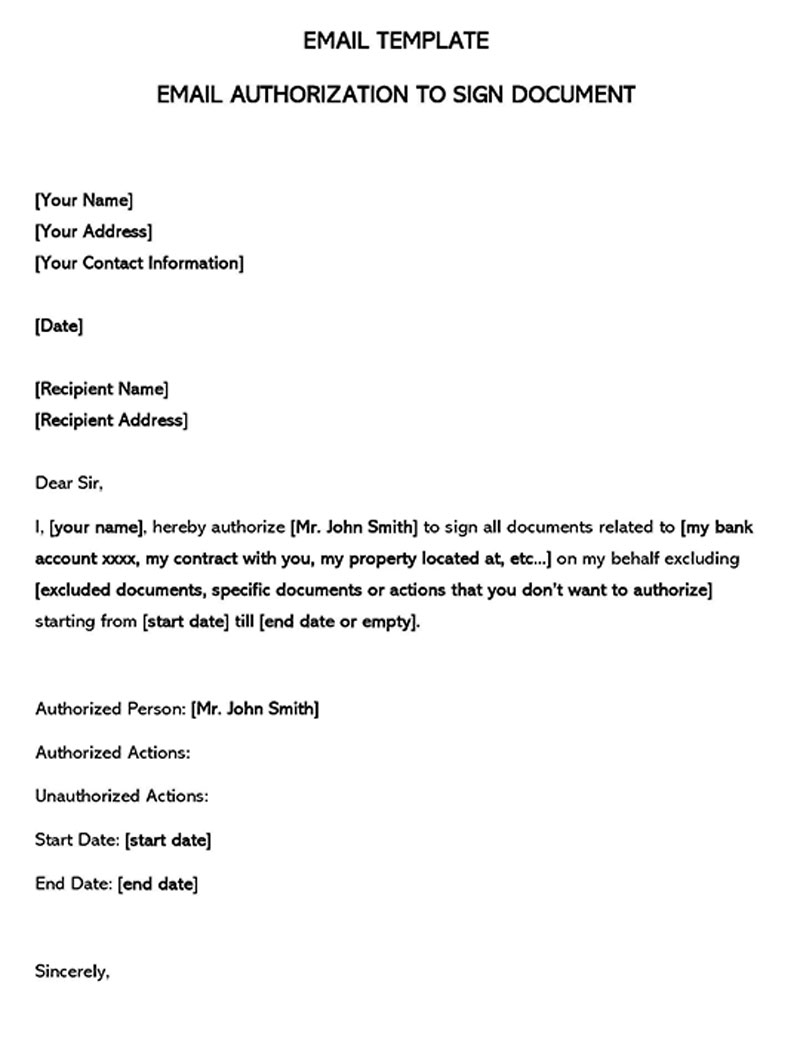 If someone permits me to sign their name, have I committed forgery?

No. Signing someone’s name with their authority is not a forgery. It becomes forgery when the appointed person fabricates the other party’s signatures and alters the documents purporting to be the original signatory.

An authorization letter grants another party the power to undertake specified actions on behalf of another person if the person is unable or unavailable to carry out those actions.

How to write an authorization letter to sign on my behalf?

A letter of authorization to sign on my behalf is written in a business format. It typically contains four sections: header, introduction, body, and conclusion. In addition, it must contain the following information – the identity of the sender and the recipient, date, subject line, formal greeting, the purpose of the letter, the identity of the representative/agent appointed, limitations of authority, details of the authorized party, CTA (call to action), authorizing party’s contact details and should be notarized.