Some purchases are too large and risky to be handled anyhow. Any errors, lapses, or inconsistencies that come along may usually attract far-reaching repercussions. You can never approach them anyhow. Instead, you have to tread the said paths cautiously to be able to safeguard yourself from any losses.

The business purchase letter of intent comes in to solve this problem. This is a written proposal of the kinds of purchases that the buyer and the seller intend to partake. The letter creates the basis upon which subsequent purchases are made. It is not legally binding, though, and may hence be side-stepped.

Why is the Business Purchase Letter of Intent Necessary?

This letter is necessary for several ways and for several reasons. Below are some of the ways and means through which its use may bring about benefits to your firm:

Breaks Down the Details of the Transaction

For a start, this letter breaks down the details of the impending transactions between the buyer and the seller. It shows exactly what the seller is offering to the buyer, at what cost that is going to be, and the terms that the purchase is to abide by for it to succeed.

Though this letter is not legally binding, it places the specified buyer at an advantage over and above the other potential buyers. Thus, the person entering this agreement has assured some sense of security. Regardless of what may transpire ahead, the specified may rest assured of receiving this item first.

Vouches for a Buyer’s Seriousness

To the seller, this letter acts as a confirmation of the seriousness of the buyer. By the buyer appending his signature on such a crucial agreement, it means that he is ready and willing not only to purchase the commodity but also to partake of any other issues that may come along with implementing the transaction.

As part and parcel of drafting this letter, the buyer has the right to scrutinize the business he intends to transact business with. That is the only guarantee that the agreement he eventually enters shall be well-informed and devoid of any grey areas or obstacles. Obviously, this is advantageous to the potential buyer.

What Should be Included?

Even though the business purchase letter of intent takes many forms and shades depending mainly on where it is crafted, it also contains numerous similarities. Below are some of the ‘must-have’ contents of a typical letter of this kind:

Introductory Clause: As with many other official letters, this one, too, has an introductory clause. In this clause, the statement of the purpose and intent of the letter is demonstrated. Accompanying this is the precise date when the letter ought to be deemed effective. Lastly, the exact piece of property is also described and explained in finer details here.

Parties to the Transaction: There are usually only two parties to any transaction. These are the buyer and the seller, respectively. Their identities, as do the kind of property that is about to change hands, are revealed in detail here.

Transaction and the Timing: In this section, the specific kind of transaction is explicitly stated. This is closely followed by the time when the said transaction is to be officially executed. Given that this letter is not legally binding, the details showcased here are merely provisional and hence subject to change at any given time.

Contingency Measures: Contingency refers to the preconditions that have to be met before the transaction is finally executed. For instance, the buyer has to obtain the whole amount first before the real estate property changes hands. It is these measures that will keep the seller well informed on what to anticipate.

Due Diligence: Before making a large and expensive purchase, it is necessary that the parties go verify the credibility of the purchase process and the items at hand. This is called due diligence, and it entails skimming the various records to vouch for their accuracy and validity. These include documents of ownership, tax records, liabilities, collaterals, ongoing litigations, and indeed, more besides. 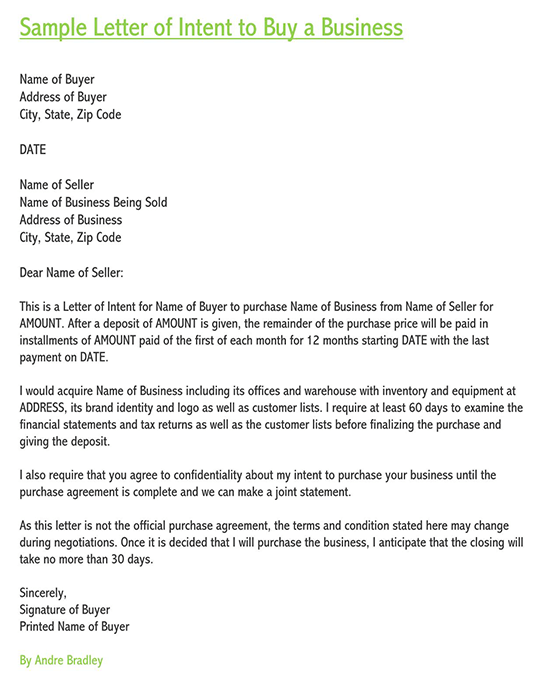 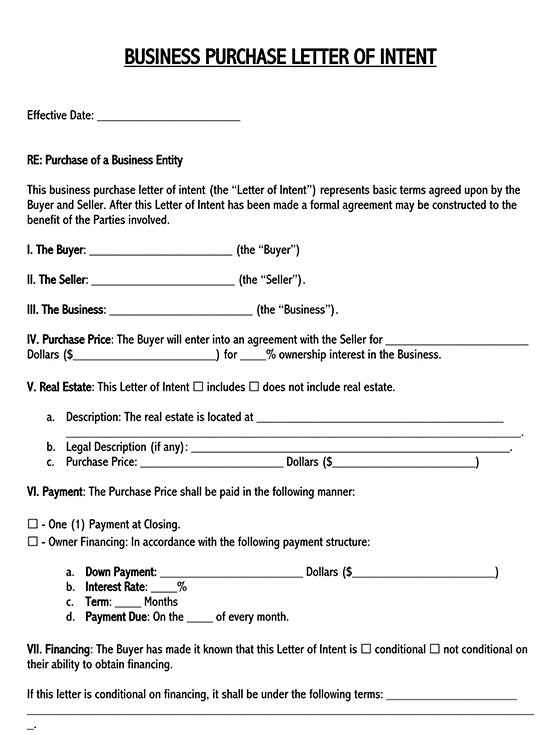 Tips for Drafting this Letter

To be able to draft a satisfactory letter of this kind, you have to adhere to certain tips. Here below, we explore these and how they might help:

Do I need an attorney for a Letter of Intent?

Ordinarily NO! Anyone can draft this letter. However, most modern transactions are too complicated for the layman to handle alone. That is why the intervention of the attorney is, by all means, strongly recommended that you secure the services and the intervention of an attorney.

Is a Business Purchase Letter of Intent legally binding?

NO! Under normal circumstances, this letter is not legally binding. Nonetheless, it is possible to introduce certain clauses that eventually make it or at least some portions of it legally binding. These clauses are collectively referred to as the ‘restrictive covenants.’

When is the Business Purchase Letter of Intent created?

Right before executing a transaction. This is often such a time when the potential buyers and sellers have jointly agreed to complete a deal and hence require more information before proceeding with the same. The exact timing for the drafting of the letter is determined by the two parties involved in the dispute.

We can never over-emphasize the benefits of the business purchase letter of intent. Its role insofar as enhancing the safety and security of the business transactions cannot go unnoticed or under-appreciated. We hence ask you to pay keen attention to the vital pieces of information we have showcased above before proceeding.