A Codicil, also referred to as a Codicil to Will, is a legal document that acts as an addendum to a Last Will and Testament. A Codicil to Will is usually issued by the person writing the Will, i.e., the Testator or Principal,

if they would like something to be added, substituted, or deleted after drafting and sealing their initial Will. The Codicil allows the Testator to change their Will without completely rewriting and replacing the original Will.

Understanding Codicil to Will

Codicils work as amendments or modifications to existing wills. They are typically issued by the testator (i.e., the person who is writing the Will) in the instance that they want something changed after drafting and sealing the initial Will.

When any changes occur to

The codicil is then attached to the Will, making it a formal amendment to the Will itself.

Like we said earlier, a codicil will be required when any changes need to be made to an existing will. The reasons for modifying the Will can vary, but the legal procedure to do so will always involve adding a codicil, which functions, essentially, as a legal amendment to an existing will. All codicils will have to follow state law, rather than federal law. As a result, the codicil will have to be written, signed, and executed within the state in which the original Will that is to be amended was written. Additionally, you should note that this slightly changes the requirements for a codicil – some states, such as Colorado, require codicils to be signed in front of two witnesses who aren’t a beneficiary of the Will. In other states, the codicil may simply be attached to any witness. Furthermore, some states require the codicil to be notarized and recommend that a codicil be accompanied by an additional affidavit. This affidavit is known as a self-proving affidavit and compels the witnesses to declare that they were in the presence of the testator when the Will was signed.

Why use a Codicil to Will Form?

There are various reasons why the Testator may choose to modify their Will. Some of the reasons include: naming a different executor, bequeathing a specific item to someone who wasn’t included in the original Will, distributing new assets, correcting mistakes, Appointing a guardian, etc, or making changes to the will in case a beneficiary dies. Regardless of the reason for making the amendments to an original Will, the legal procedure will always involve a codicil, which functions as a legal amendment to the existing Will.

Ensuring validity of a codicil to will form

For a Codicil to Will to be legally valid, it must be crafted in line with the state laws and not federal laws. This implies that the Codicil will have to be written, signed, and executed within the State where the original Will was written. Some states have different provisions for the notarization and signing of the Codicil. For instance, states such as Colorado and Louisiana require that the Codicil be signed in the presence of two witnesses who are not beneficiaries of the Will. In contrast, some require that the Codicil be notarized and be accompanied by an additional affidavit- (A sworn statement compelling the witnesses to declare that they were present when the Codicil was being signed).

NOTE: Only the Testator/Principal, i.e., the creator of the last Will, can make changes to their Last Will and Testament. This implies that even if someone has Power of Attorney, they cannot create a Codicil to amend the Testator’s original Will.

Making any amendments to a Will is easy, although it should be done with a lot of care and should be in line with the State’s provisions.
Amending an existing will requires a codicil, a legal document signed by the testator (the person who declares their Will). To attach a codicil, you may follow these steps;

Latest version of the Will

The first thing that one has to do when making changes to a Will is obtaining a legal copy of the latest version of the Will. The Testator must go through the entire Will and note down all the areas they would like to change before writing the Codicil.

The next step is to determine the changes that are supposed to be made to the Will. Since a codicil can make any changes to all tenets of an existing Will, the Testator should take their time and decide on which items they would like to amend.

When determining the changes that should be made to the Will, the Testator should also note down all the sections and language they would like to change. These sections/languages should be referenced in the Codicil.

NOTE: It is recommended to craft a new Will if the changes to be included in the Codicil are extensive. For instance, if the Testator gets married, divorced, or gets a new baby, they should consider creating a new Will to reflect their significant life changes.

The Codicil is executed in the same way as a Will. This means that the Testator must sign the document in the presence of two witnesses who are not beneficiaries of the Will. Depending on the State’s requirements, the Codicil may have to be signed in the presence of a notary public for the self-proving affidavit to be valid.

Add to the Will

The last step of amending a Will is to add the Codicil to the Will. A Codicil, together with the Will and any unrevoked testamentary dispositions – all such testamentary documents jointly form the Testator’s Will. The Codicil should be stored with the Will to which it relates in a safe and secure place. The Testator must also provide a copy of all the documents to Will’s executor and inform them where the original copies have been stored.

Keep in mind that some states require witnesses who aren’t beneficiaries or executors of the original Will to be present when the codicil is signed by the testator. Some states also require that witnesses provide and attach a self-proving affidavit, which is a document that declares the witnessing of the signature by the testator.

Once these details have been addressed, the codicil is ready to be attached to the original Will. If you are still confused on how to draft and prepare a codicil, don’t worry – we’ve got you covered. Below, you’ll find a template that can be used as-is, modified to better suit your needs. We haven’t added a signatory section, which is typically regarding the names of all the parties involved. This only contains the body of the codicil to will addendum, so make sure to add names and dates to the document. Additionally, we also recommend having legal counsel around when drafting such documents, particularly if they contain legal intricacies that can be much trickier to deal with.

I hereby wish to add the following amendments to the Will, signed on (date of original Will) in the form of this codicil;

(Here, you may specify any changes you wish to make to the original Will.)

For any legal purposes and/or consideration, the terms of the Will signed __ will continue to be held enforceable and will remain in effect unless explicitly specified otherwise within this codicil.

I hereby agree that, without any duress or undue influence, the aforementioned changes reflect my wishes as it pertains to my Will dated . (Date of the original Will.) I hereby declare so in the presence of ____ & __

(Here, all witnesses must be named.

Following are the free downloadable templates that can be customized as per need:

Codicil to Will Form

Codicil to Last Will Testament Form 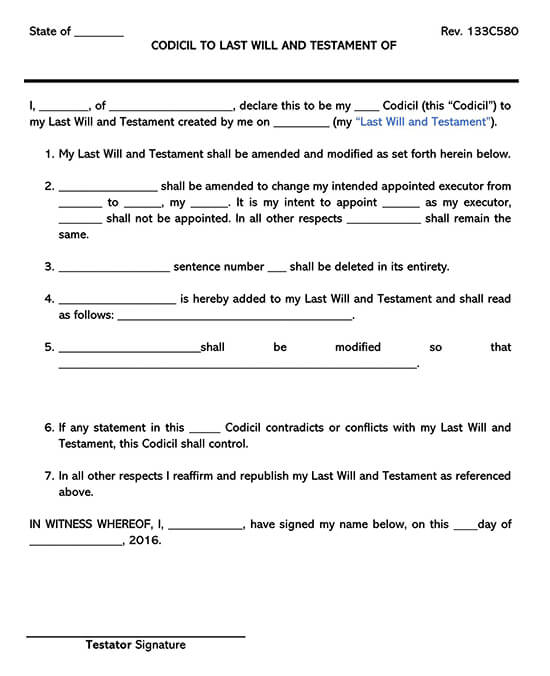 Codicil to Will Clean

Specific Directive Codicil of Will and Testament 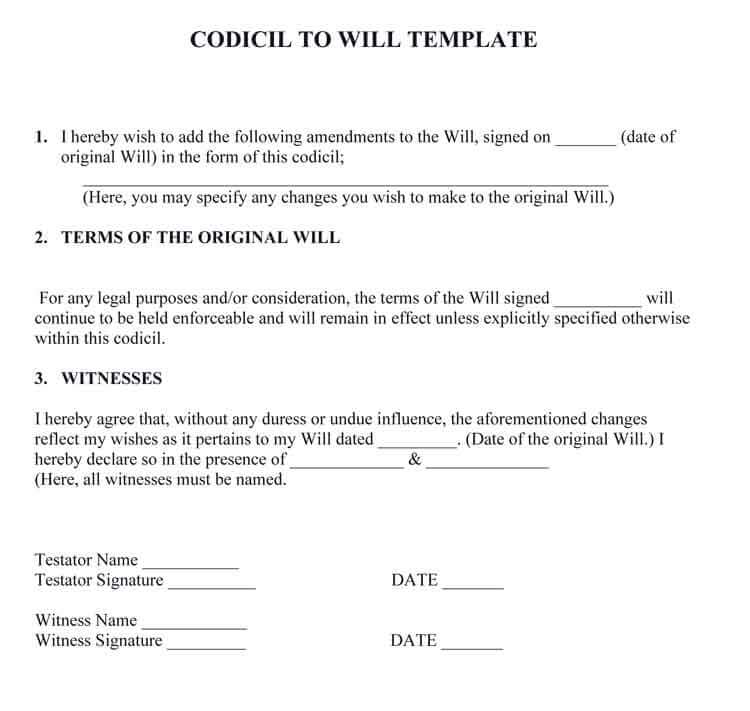 Codicil to Will Template

Can one add an addendum to a will without a lawyer?

Yes. A codicil requires the Testator’s signature and at least two witnesses not mentioned in the existing Will. Thus, one can add an addendum to a will without the presence of a lawyer or let their lawyer create one on their behalf. Either way, the document will still be valid, provided there are two witnesses to authorize it.

Is a handwritten codicil legal?

Yes, it is legal. One can do a handwritten codicil to a typed and witnessed will. However, doing a holographic codicil may be prone to mistakes as chances are high one will make a mistake in doing it correctly. A handwritten codicil may also make the probate process more difficult; thus, it is wise to do a typed one or hire an experienced estate planning attorney to do it instead.

How to Revoke a Power of Attorney (Free Revocation Forms)