A video release form is a simple agreement between a video producer and the video’s subject.

It includes sections clarifying ownership rights, how to use video content, and more. When working on video projects, collect signed release forms from each student and adult being filmed. However, kids under the age of eighteen are unable to sign release forms on their own. Instead, their parents or guardians must sign the forms on their behalf.

Creating a video and interview release consent form is essential for obtaining permission from those who will be featured in the production and safeguarding yourself against future complications.

What is a Video Release Form?

A video release form asks for the subject’s permission to use their image, voice, and speech in publication. These benefits can extend to media, the internet, physical products (such as CD players), or any other sort of publishing. You can combine numerous types of release form vocabulary to build a release form that best fits your needs.

A video release form is commonly used in courses for educational purposes where images may be presented, documentaries where a person’s voice is used for narration, media for advertising products or services.

It is also used in movies that use the images and voices of actors in role-playing, news where a person giving information to an interviewer has their image used, presentations, for example, school presentations where images of people are a part of data collected, and online videos where an individual’s image is used to promote certain products.

A production company may mistakenly record branding, persons, private property, or minors while making the best possible video for a project. The video may then be published and shared without consent. This scenario could have serious legal consequences. A video release form will help you avoid any legal issues that may arise.

When should it be signed?

What should be Included in a Video Release Form?

Video release forms are different. They may vary in vocabulary and content. A video release form may be used to obtain permission to release images or videos to newspapers, television, or social media. Therefore, their content will vary according to the purpose. Below are some of the typical details that every form will have:

The forms of media that a production company can use are:

Pro Tip: Mention any media platforms used to publish the videos in the form to avoid any misunderstandings.

A third party is an individual or organization outside of the publishing company and the person in the video who may want to use the videos recorded. Include a provision that allows you to sell or transfer the release form’s related rights to third-party individuals or organizations.

The time limit states when the video release form will expire, and the production company can no longer use the individual’s image in their videos. Every form should include an exact time limit that specifies when the consent granted will expire. It’s a good idea to mention that the permissions granted in a form are everlasting.

This gives you the flexibility to use the individual’s images/audio/video whenever and for as long as you like. This is dependent on whether you and the individual featured in the video have agreed that the permission will expire at some stage.

When creating a video release form, customize it to cover permission for both present and future use. The initial purpose may be for present use only, but a need for it in future marketing may arise. Take into account all future prospective opportunities and materials that you might want to research.

The payment is usually received by the talent and is mentioned separately in the video release form, but because the form templates are different, the form should be tailored to the current needs. Do prior research. Know what you want to do with the video and interviews, but don’t confine yourself to that. For the sake of the production company and the talent, be upfront and clear about the expectations of the video and interview release consent form. 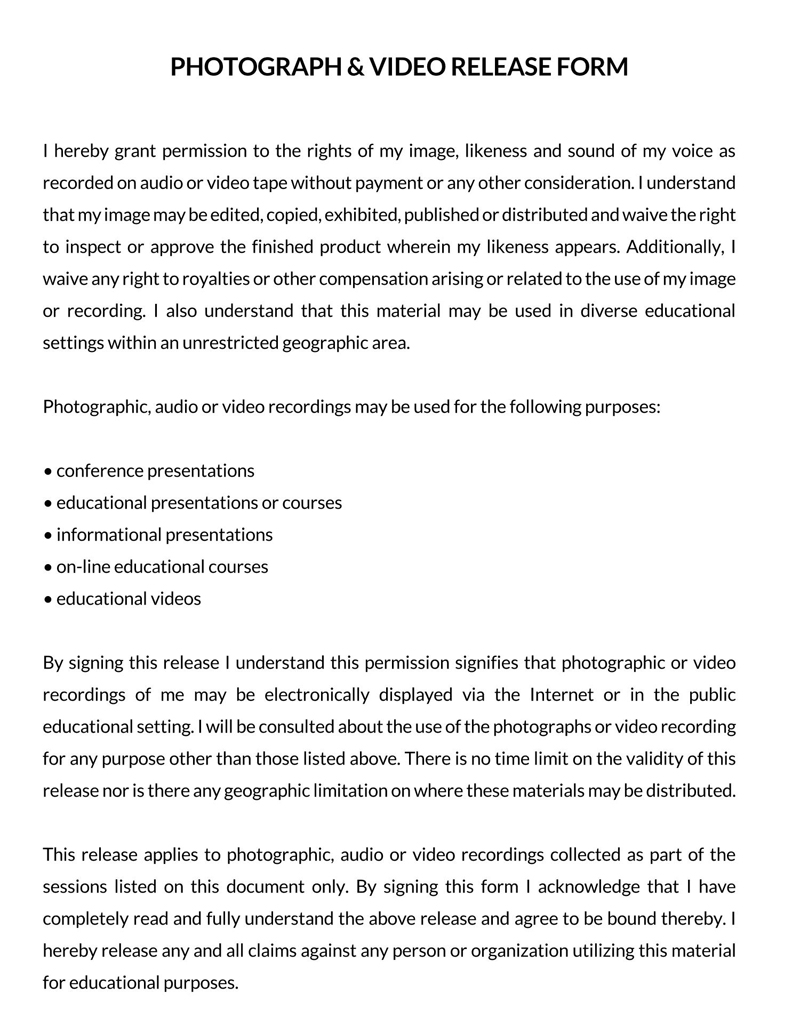 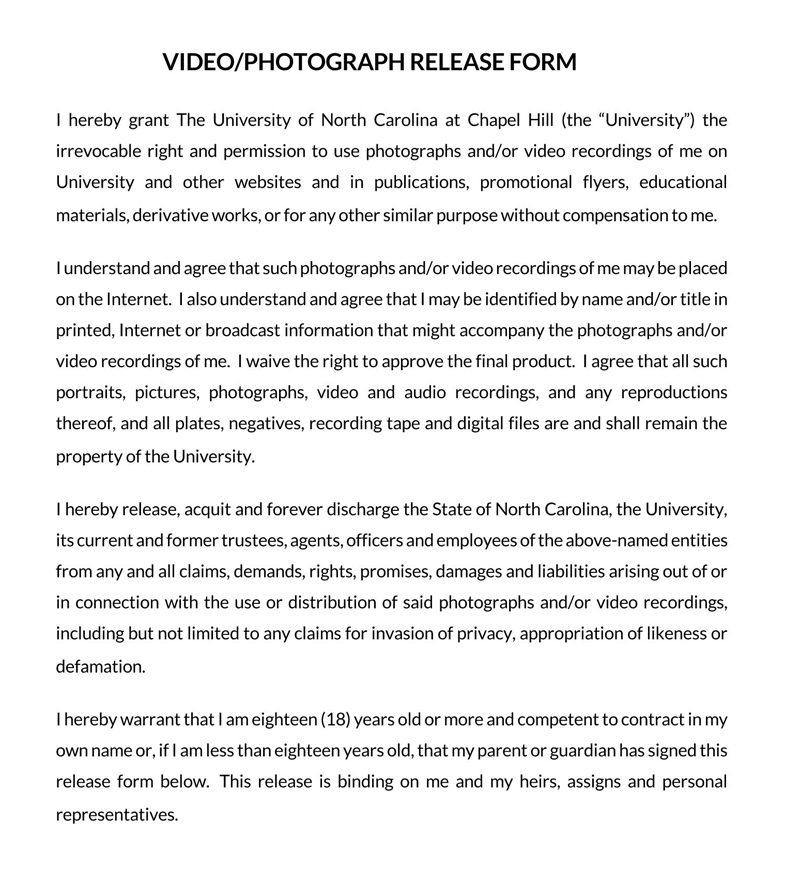 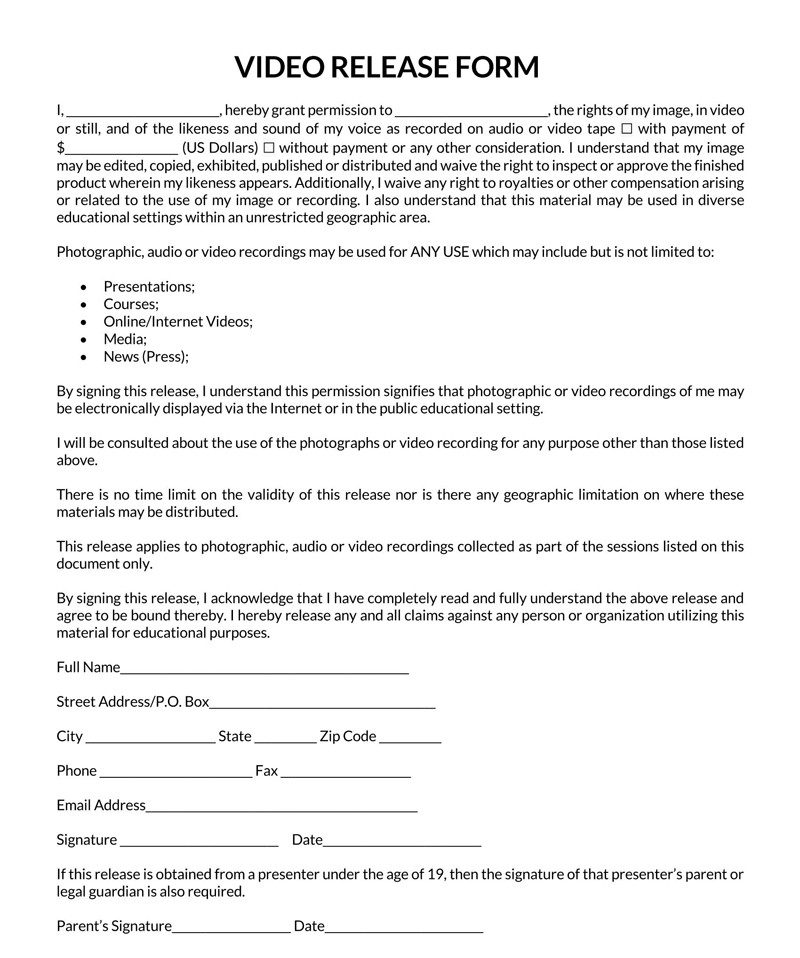 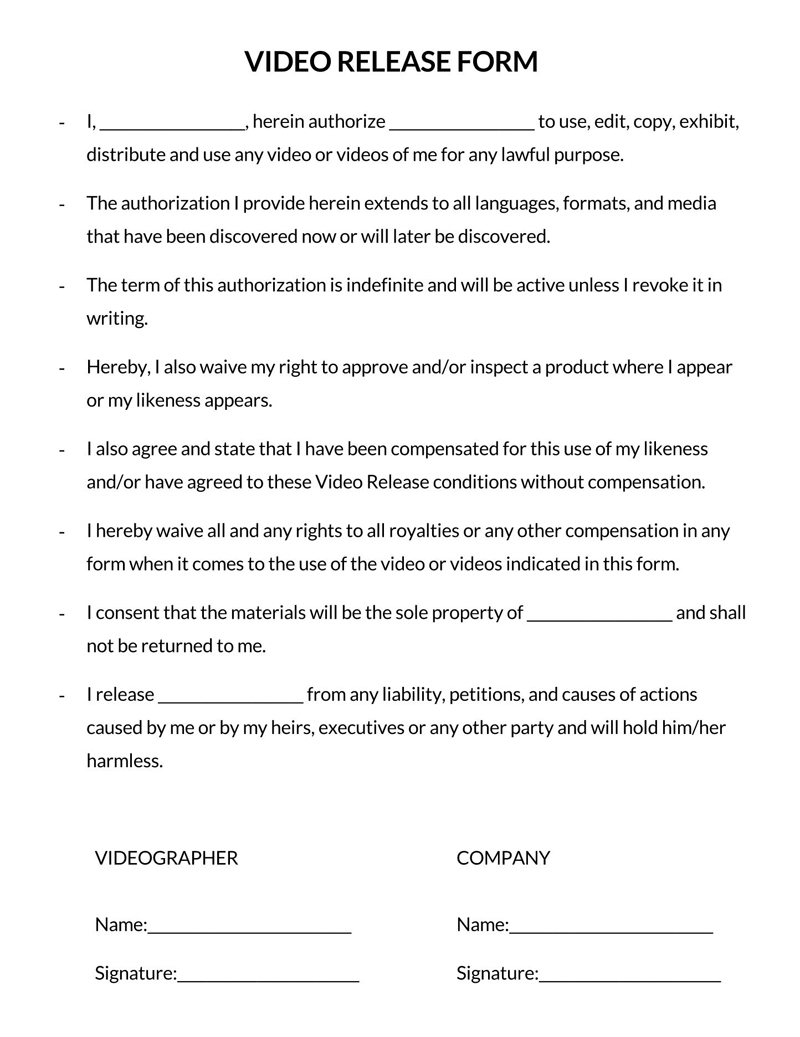 How Does a Video Release Form Work?

Consent is required to use other people’s images in videos or photographs according to privacy laws. It is important to note that these forms cover photographs as well.

Note That: Different states may have different laws on using people’s images or videos.

Therefore, it is crucial to research the privacy laws in the country you are in to avoid lawsuits.

The last step is filling and signing the form. The form should contain the client’s information, including the name, address, contact information, and the agreement’s date. In addition, a parent or guardian’s signature will be necessary if the video release form is being completed for a minor.

How to Write a Video Release Form

A video release form is a simple document to write. In this section, we have made it easier for you by explaining its components with examples.

The first step in preparing this form is to make a list of every person included in the video and make sure that they all sign the forms. Not completing this step may subject the production company to future legal actions and the possibility of the finished video being banned from store shelves or the internet.

Name of the recipient and the production company

The first blank space on the document should contain the person’s name, permitting their image to be used.

The second blank space is where the name of the production company will be written.

Mark the first check box if a fee for using the subject’s picture or voice has been offered. Proceed to then fill in the amount in dollars on the blank space.

If the production company is not making any payments for using an individual’s image or voice, check the box “without any payments.”

The final step is where the recipient signs after agreeing to the terms of the video release form. They will provide their name, address, email, and signature to authenticate this document. In addition, a legal parent or guardian’s signature is required if the subject is a minor.

Sample of a Video Release Form

I acknowledge that I have been compensated for using my likeness or have agreed to this release without compensation. Accordingly, I forfeit any claim to profits or other revenue resulting from or linked to the video’s use.

I hereby free__________________ (name of production company) from any liabilities, petitions, claims that I, my successors, representatives, or any other person may bring on my behalf or behalf of my property.

A video release form is required when filming a video that you wish to distribute or sell. For video production, these forms are essentially contracts that confirm that a person has given you the right to film them or their property. It will safeguard your company from legal issues like an actor refusing to let their image be used after filming or copyright items appearing in your video.