A Kentucky Power of Attorney is a legal document that allows a person to transfer authority to a representative to act on their behalf in transacting and managing specific affairs.

The principal is the actor who transfers the powers, and the representative is the agent whom the transferred powers are being vested upon.

Kentucky has again enacted changes to its laws guiding powers of attorney on the 18th of July 2020 in the Uniform Power of Attorney Act.

These documents are filled out so that in any event where the principal is incapacitated, unavailable, or someone else has to take care of their transactions on their behalf, for the medical, financial, business affairs, etc. Interests will be very well taken care of by a reliable representative. The importance of having someone you trust, such as a spouse, relative, or close friend, as your representative cannot be overemphasized.

For example, you could find yourself in a situation where you are on a business trip, and you can’t be available to sign some very important document, or perhaps you are incapacitated as a result of a health condition. A power of attorney can ensure your best interest is implemented in such situations.

Kentucky laws also make a statutory form with a list available so that you can easily tick out the powers you would want to be conferred on your representative. This helps greatly in easing the process and also in reducing the risks of exploitation and confusion that could arise if everyone were allowed to write the terms of a power of attorney however they please. Every provision in the form is expressly defined by statute so that principals will fully understand the implication of whatever item on the list they decide to transfer to an agent.

The following is a well-detailed list of Kentucky power of attorney forms:

An advanced directive power of attorney in Kentucky is a form that states the guidelines hospitals will follow on how patients would like to be treated, especially if they have agents who will represent their medical needs. This directive combines the medical power of attorney and a living will that helps end-of-life treatment options for the principal. It must be sanctioned by state-wide law and the presence of two witnesses or a notary public. It is required that the form be made easily accessible subsequently for future uses. An advance directive power of attorney is comprised of a living will and a health care surrogate designation.

The statutory power of attorney form in Kentucky aids in situations where a person (i.e., the principal) wants to delegate their power to carry out financial activities to an agent (i.e., representative). It is known as "durable" basically as a result of the ability of the agent who has been vested with a power of attorney to continue acting on their delegated capacity even when the principal loses their mental or even physical capabilities. The principal must sign this document in the presence of a notary public.

In Kentucky, this is when a principal can delegate his powers to his agent to carry out a specific matter. To avoid confusion with a broader power of attorney, the form in Kentucky must be written to the effect of that specific transaction alone. You must ensure that your agent will carry out the transaction in your best interest. The principal must sign this form in the presence of a notary public. The law governing limited powers of attorney is the – Uniform Power of Attorney Act (§§ 457.010 — 457.460).

The Kentucky minor power of attorney is a form that a parent will fill to delegate powers to another person to make decisions for their children in case of an event where they won't be available to make such decisions for the children. This is important in cases where parents will be apart from their children for a while or when they are hospitalized for an extended period, deployed in the military, etc., and won't be available to make certain decisions that may arise in their children's life. The law governing this is 27 A.095, and it is required that it is signed before a notary public.

It is also imperative that when filling and executing this form, the previous agents of the power of attorney should be notified and any concerned institutions so that they do not carry out authority based on a power of attorney that has been revoked.

They will not be held liable if they continue to behave though it had not been revoked. The revocation form is to be signed before a notary public.

In Kentucky, the real estate power of attorney is used to grant an agent permission to engage in functions with real property in that agent's name. For example, this can be done by a principal to facilitate the sale, purchase, refinancing, or management of the real property. The agent, in this case, could be a company, a knowledgeable lawyer, or perhaps an individual that the principal trusts to hand a segment or totality of their real property. After the document has been completed with relevant signatures, the notary who witnessed it must provide acknowledgment for it to come to effect. It is important to note that this power of attorney can be revoked at any moment, provided the principal hands with the agent a notice of revocation. The statute governing this document is the Uniform Power of Attorney Act (E§§ 457.010 — 457.460).

Also known as IRS power of an attorney form 2848, this is a form that a principal can use to authorize an accountant or somebody else to file federal taxes on their behalf. Both individuals and entities could use this. It also authorizes a tax attorney or accountant to stand on a principal's behalf and submit taxes to the IRS. This power of attorney form must be filed with the correct tax authority by the principal by mail or e-file in Kentucky.

This type of limited power of attorney where an agent is authorized by a principal to the title, register, or carry out any function related to a vehicle in Kentucky with the Kentucky Bureau of Motor Vehicles. The document must be signed before a notary public.

The law governing the powers of attorney in Kentucky is the Kentucky Revised Statutes Chapter 457 (Uniform Power of Attorney Act).

Some of its new provisions include the following:

Another governing statute is  Kentucky Revised Statutes Chapter 311, Sections .621 to .643 – Kentucky Living Will Directive Act which describes the following: 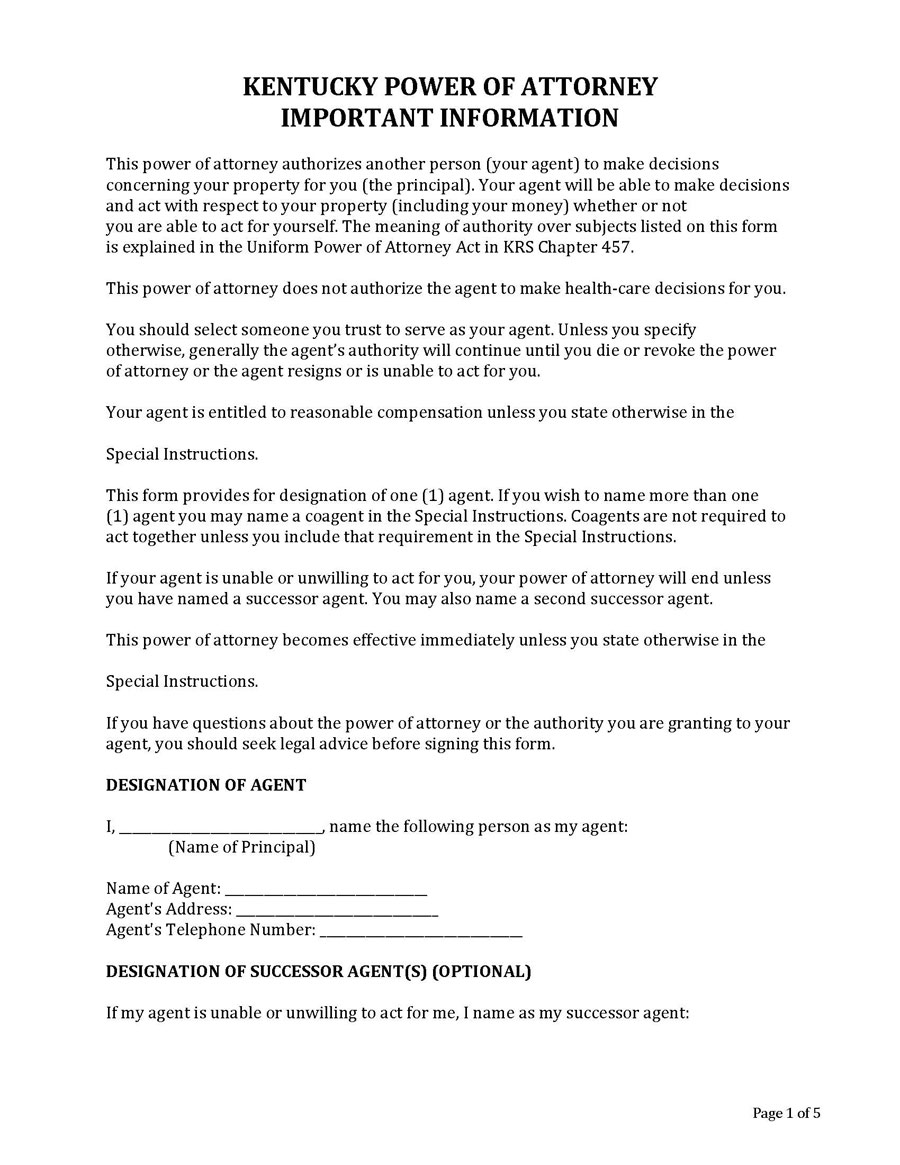 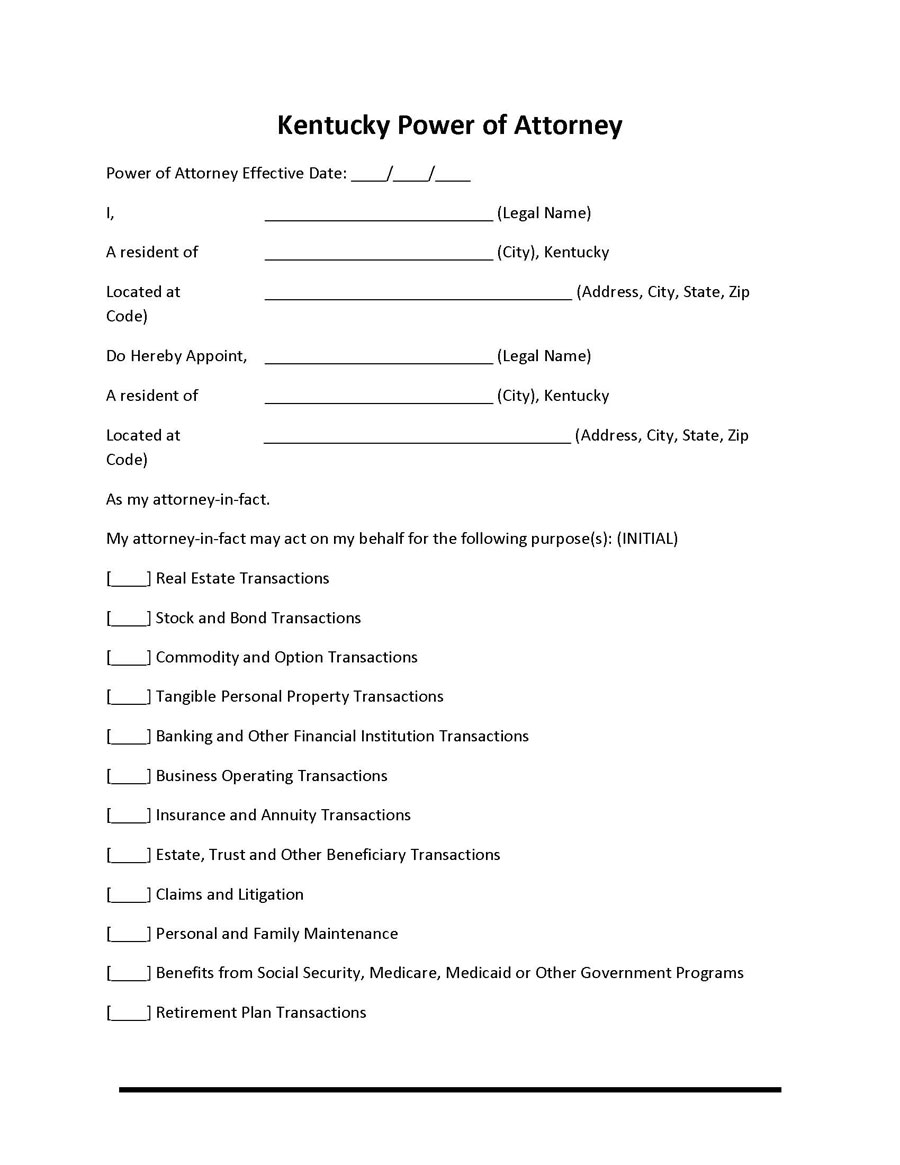 For a power of attorney to be valid, it must have:

Express Vs. General Grant of Authority

A general grant of authority is achieved by choosing the power on the statutory form. However, in the case of an express grant of authority, the principal must state in specific words that the agent has the power to conduct certain actions within a power of attorney.

How to Get Power of Attorney in Kentucky?

It would help if you had an agent you could trust, but more importantly, that person should be at least knowledgeable in the area where you need the Kentucky power of attorney form. This will help your agent make the best decisions for you, whether medical, financial, tax-related, or vehicle affairs.