A Power of Attorney (POA) in Michigan is a document with which a person can authorize another to act on their behalf with the same level of authority.

Types of POA in Michigan

There are several types of Michigan POAs to facilitate a variety of arrangements. The type of POA used to set up an arrangement determines what scope of power can be given to the attorney-in-fact, and the affairs that can be managed using that POA.

A durable (financial) POA grants authority to the attorney-in-fact to manage some or all of the principal’s business or financial matters to a specific extent in Michigan. A durable (financial) POA states the authorization of the attorney-in-fact to remain valid even when the principal becomes incapacitated and can no longer make independent decisions. Unless specified, all POAs are durable by default and can remain valid throughout the principal’s life. Durable POAs are defined under Section 700.5501 of the Michigan Compiled Laws. As stated under this section, durable POAs must be signed before two witnesses (neither of whom is the principal) or a notary public.

A general (financial) Michigan POA grants authorization to the attorney-in-fact to manage the principal’s business or financial matters to a specific extent. Unlike the durable financial POA, this type of POA becomes invalid once the principal becomes incapacitated.

A limited Michigan POA allows an agent to exercise authority in some specific duty and no more. The authority granted to the agent is carefully bounded, and the agent is restricted in what they can do.

A minor (child) POA is used to grant temporary guardianship of a child under the age of 18 to another person by the child’s current parents or permanent guardian in Michigan. This POA grants authority to the temporary guardian to make decisions on matters of care, custody, and property concerning the child without needing further authorization for a period not exceeding 180 days. A minor child POA cannot be used to consent on behalf of the child to marriage or put the child up for adoption. The delegation of power by a parent or a guardian is covered under Section 700.5103 of the Michigan Compiled Laws.

Revocation of Michigan power of attorney is a document where the principal in a POA can recall the decision-making power granted to an agent. Following the activation of revocation of POA, the agent can no longer make decisions on behalf of the principal. This document is required when terminating a non-beneficial POA and before reassigning agents.

A tax power of attorney authorizes an appointed person to represent the principal before the Michigan Department of Treasury. The appointee can file tax statements and appear in place of the principal whenever required. A tax power of attorney in Michigan is put in place by obtaining, filling, and filing Form 151 accessible from the website of the Michigan government. This form is not notarized but must be approved by the Department of Treasury.

This is a type of POA with which a principal can authorize a representative to handle the sale, titling, or registration of a motor vehicle, watercraft, or mobile home on their behalf. A document called Form TR-128, obtainable from the website of the Michigan government, must be filled by the principal and issued to the representative to delegate authority.

A springing POA for Michigan is a delegation of decision-making power that only comes into effect upon a specific event. The attorney-in-fact gains the authorization to manage the principal’s affairs at a time in the future.

A Michigan power of attorney document informs all relevant entities that the person whose name is specified in the document has been empowered to act by the principal in their stead. As an agent, this intent must be communicated accurately to facilitate the function of the responsibility given.

The document that identifies you have POA

The POA document signed by the principal identifies the agent as their representative in Michigan. A copy of this document should be present with the agent on any occasion when they have to make a decision or sign for the principal.

For example, while some institutions might make filings to document the transfer of authority, a POA document will be required at a first meeting. The agent should also carry a means of identification, such as a driver’s license, to verify that they are the person named in the identifying document.

Use the correct procedure for signatures

Section 700.5501 of the Michigan Compiled Laws details the conditions that must be satisfied when creating a power of attorney for the delegation of authority to be acknowledged under the law. A POA document must satisfy the following:

“effective immediately” or “in X days” denote the period of activation of the POA.

After a POA document is established, the attorney-in-fact must sign an acceptance that states that they receive the powers granted and will act in the principal’s best interest. 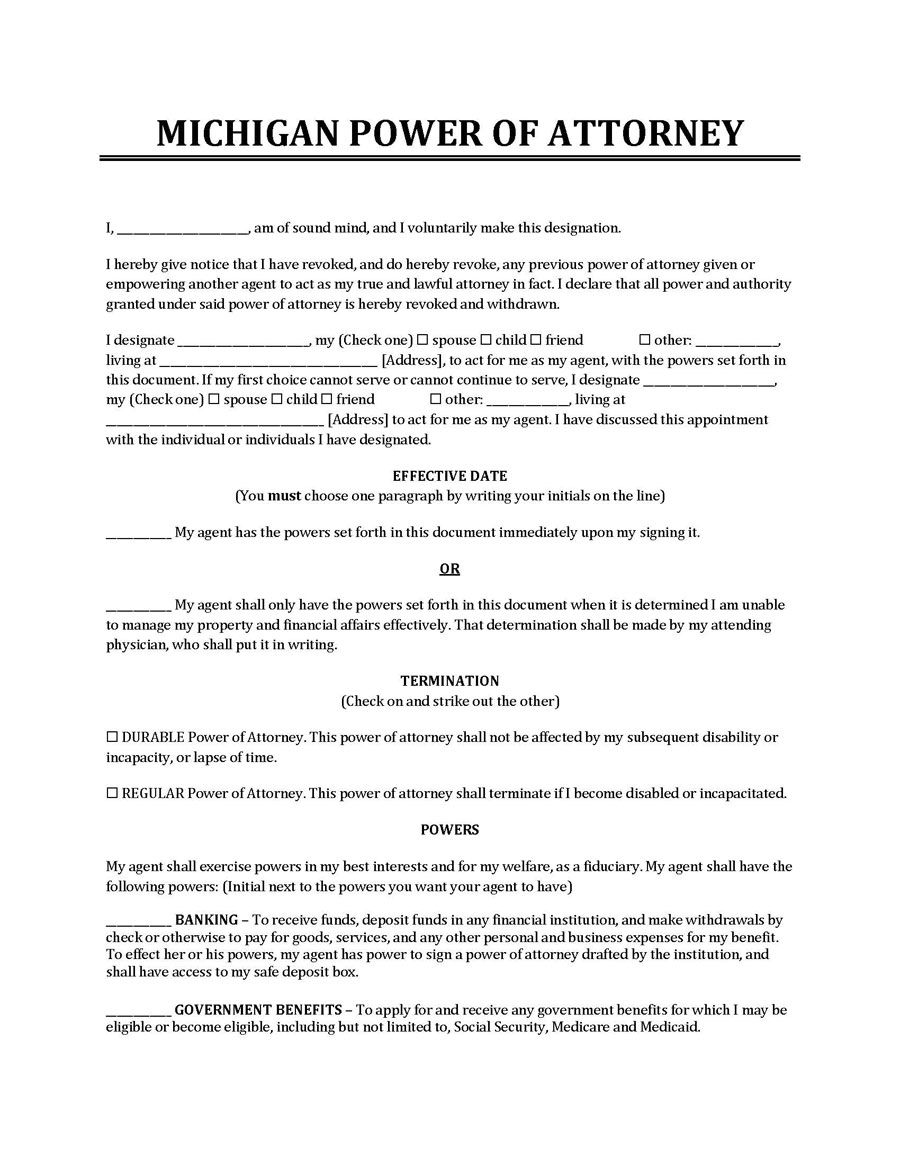 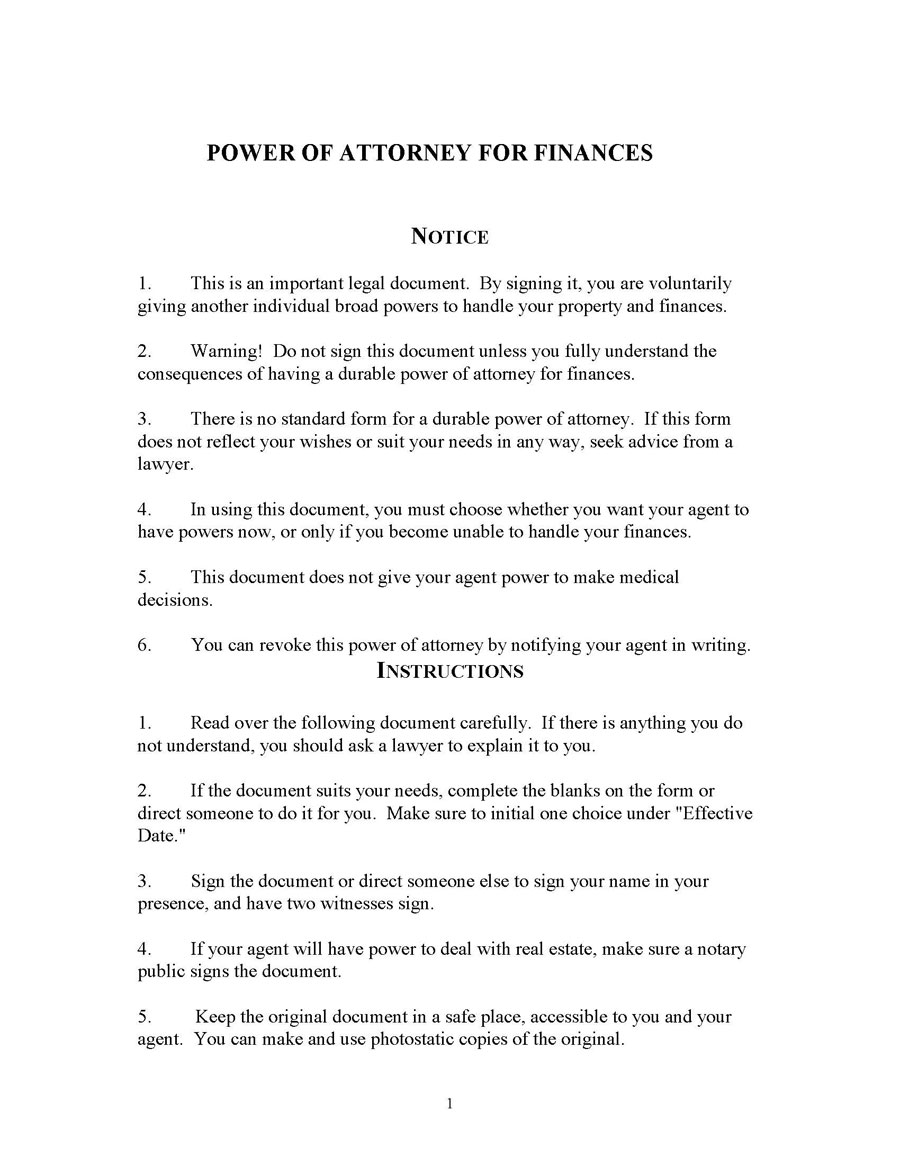 How to Get Power of Attorney in Michigan?

A power of attorney in Michigan is created by a handwritten or typed document that states the principal is empowering some individual to make decisions on their behalf on a specific matter, to a specific extent, and within a specific period.

There are no standardized documents for creating a POA, except in specific instances, but the requirements by law stated above must be included in any document to serve this purpose.

A POA can also be written up on behalf of the principal as long as the principal directs the writing and is mentally competent enough to do so.

Creating a power of attorney is a straightforward task and can be easily accomplished using the following steps:

A POA grants authority to another person, either bounded or unbounded. A POA must include a clear statement of the authority being given to an attorney-in-fact. This statement should indicate the particular affair to be delegated. If the powers granted to the agent are to be regulated, the POA should also include a statement to that effect. An agent can likewise be given total authority over an aspect of the principal’s affairs.

The principal must sign the POA document before either a notary public, two witnesses (neither of whom is the attorney-in-fact), or both to give the document legal authority. The date on which the POA is signed must also be included to make it obvious when the agent’s powers can come into effect.

A Michigan power of attorney is a handy document for any resident of the state of Michigan to possess as a safeguard against the uncertainties of the future. By transferring authority from one person to another when needed, assurance can be created that some affairs are being taken care of even not present. For example, undesired medical procedures can be prohibited during medical emergencies, minor children can be cared for in absentia, and professionals can be given leeway to conduct their business uninterrupted.

POAs are powerful documents carefully regulated under the law. Principals and attorneys-in-fact must adhere to specific stipulations when creating one to ensure that the document is valid. While comparatively easy to use, POAs have a significant impact that should necessitate care when creating one.