What is an at-will employment contract, and how does it affect your job security? Most people rarely go through the employment contract handed to them. Instead, everyone runs to the wages section and signs, which leaves you exposed to other factors that could render you jobless.

A few months later, in your line of work, you realize that your contract had a clause that could be used against you. Today, we will look at an at-will employment contract and what it means.

The At-Will Employmet Contract states that your employer reserves the right to fire you at any given moment and for any reason.

Above all, if there’s no written agreement between the employee and employer, the employee has the right to state that the termination wasn’t justified and use the exceptions as regulated by the State Law.

If you are currently employed under the at-will contract, your employer could fire you at any given moment. However, in most states, employers have fully embraced this type of contract, and very few employees have gotten wind of it even though it’s clearly stated in the agreement they’ve signed.

Fortunately, this article is in your best interest; we will go over some of the issues that might arise in your contract and what you should know. So, strap in, and let’s get started.

How Can You Know You are an At-will Employee?

According to State Law, you are automatically employed under the At-Will contract. However, to ensure this doesn’t happen, it’s best to have it in writing or through oral statements in the office if you are under a different employment contract. Otherwise, it’s dismissible in court.

With that in mind, let’s look at the different ways to determine that you are under the at-will employee contract.

Employers mainly take their time to write down contracts, policies, and handbooks. These documents contain the specifics of your contract. That’s how you can determine if you are employed under the At-Will contract. However, if you’ve already signed it and didn’t check, there’s very little you can do to change this fact.

More importantly, the contract doesn’t necessarily have to state directly that you are under the At-Will contract. Phrases such as ‘you can be fired at any time without any cause’ can mean the same thing. Therefore, take your time to read the fine print. You can also consult with your employer if you need any clarification.

However, if your employer has listed the circumstances at which you can be fired, you are legally entitled to some level of job protection. Similarly, if you are currently signed into a contract that promises some level of security, then you are not an employee at will. For instance, if the paperwork you signed says that you can only be fired under fraud, you can legally claim to fight against your employer if there’s any breach of contract.

For the statements by your employers

Did your employer tell you that you are an at-will employee? If not, certain statements could come to your defense. For instance, did your employer say anything like ‘we will only retain you if you meet your performance expectations?’ or ‘this office is like your home as long as you continue to do a commendable job!’ Such statements would aid you in your defense, especially if they significantly influenced you to take the job in the first place.

However, if your employer told you that you are an at-will contract, then they can fire you at any given point with or without probable cause. Therefore, it’s always an excellent idea to read the fine print before signing any document, especially if you are a new employee in the company. But at the same time, it’s not all doom and gloom.

An at-will contract works wonders for an employee who wants to change employment to another company. Yes, that’s right! Under the at-will contract, any employee can change jobs without notice, even though it’s common to provide a two-week notice, regardless of the legal requirement. But, again, that’s because it helps protect your reputation with your future employers.

Following are a few editable at-will employment contracts for you: 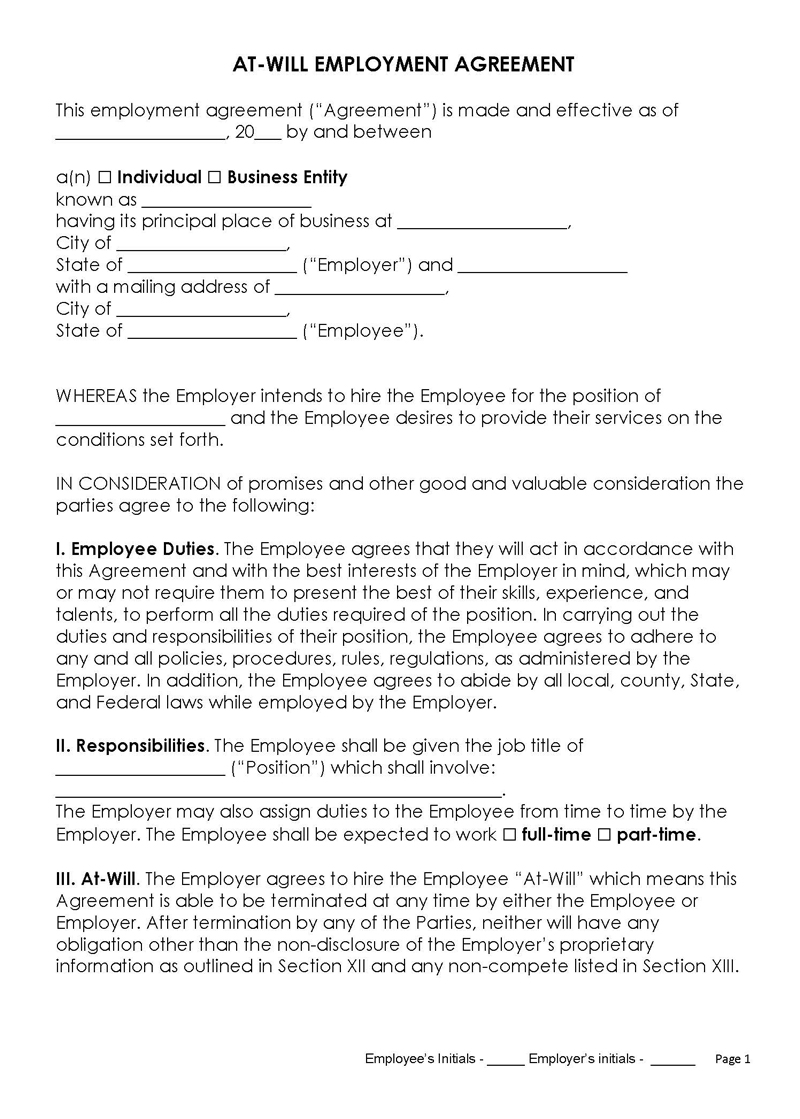 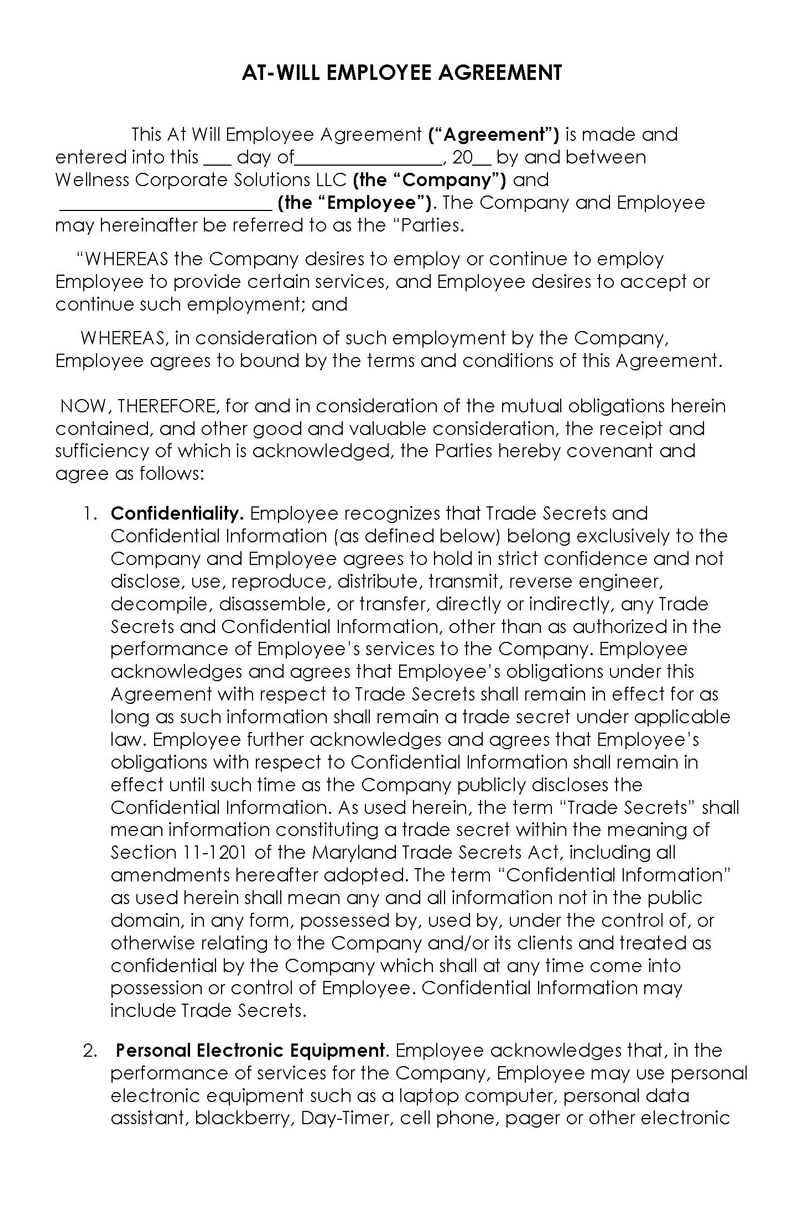 Your Rights as an At-will Employee?

Now that you’ve discovered that you are an at-will employee, what are some of the rights you are entitled to? Even though the at-will employment contract has limited rights compared to the alternatives, such as collective bargaining agreements, employment under a union, employees still have rights after termination.

The rights are found in the statutory rights under state and federal law. An excellent example includes unemployment, anti-discrimination laws, and unemployment insurance. With that in mind, let’s look at the rights of an at-will employee and the exceptions.

Under the Federal Laws, there are several instances stated where an At-Will employee could challenge their termination. These include:

Federal laws and other state legislations protect against firing an employee having at-will contract for discriminatory reasons. To put it plainly, you cannot be fired based on the following discriminations:

If you suspect that you’ve been fired because of the above discrimination and you can prove it in court, then, by all means, talk to your lawyer. However, it is essential to note that different states honor different sets of exceptions, so speak to a professional to clear that out first. If you can’t prove it, the lawsuit will not hold in court.

Since the invention of polygraphs in 1921, many people have used these items in different situations. Even though polygraphs are helpful tools that help determine whether someone is telling the truth, there are limits to how you can use them, especially in the private workplace. Therefore, to protect the employees from being subjected to unnecessary polygraphs, the US government passed a law in 1988; Employee Polygraph Protection.

This act prohibits employers from subjecting their employees before or during employment. More importantly, this legislation also protects the at-will employee from being put to the test. If an employer is found guilty, they are liable to the employee for equitable relief, including promotion, reinstatement, employment, and payment of the lost benefits and wages.

Immigration status discrimination occurs when the company treats you differently depending on your immigration status or citizenship. Asylees, recent permanent residents, US citizens, and refugees/immigrants are all protected under this act. Additionally, the only exception to this act is a permanent resident who didn’t apply for naturalization after six months of eligibility. Such individuals are not protected under this act.

The IRCA (Immigration Reform and Control Act) is the federal law that protects you from employment discrimination based on your immigration status. This law makes it illegal to indulge in such acts as an employer and protects the employee when exposed to such circumstances.

OSHA (Occupational Safety and Health Administration) standards are rules and regulations that describe how employers should protect their employees against hazards. There are different OSHA requirements for the construction workplace, general industry, and maritime operations.

These standards help limit the level of hazards employees should be exposed to. In addition, these standards emphasize using safety practices and equipment when working in those spaces.

The employer is also legally obliged to monitor hazards, injuries, and illnesses in the workspace. For example, the use of guards on machines, employers should provide respirators when employees are dealing with harmful substances, and more.

Each state is inclined to a different set of exceptions. What is accepted in Colorado might be different than what you will get in Illinois.

That said, here are some of the State Laws exceptions in general:

Does the state provide a public policy exception to your at-will employment contract? If yes, your employer may not fire you if the cause of termination involves the employee’s compliance with state policy. An excellent example is a refusal to engage in illegal activity at the employer’s request.

When working as an at-will employee, you should always be keen on what your employer says. Your employer’s words could help you secure your job whenever you are about to be fired unlawfully.

Typically, in the case of an implied at-will contract, your employer loses their right to fire you without probable cause. For instance, your employer can give you oral suggestions that indicate job security.

If and when the employer fires their employee as an act of bad faith, the employee has grounds to file a case in court. Such ill-intent is prohibited in the good faith exceptions.

Even though you might not have much choice when signing an at-will employment contract, it doesn’t mean that your employer now has full rights to fire you whenever they feel like it. On the contrary, your employer will likely gain nothing from firing their employees without probable cause. Most employers are motivated to work through their employees’ issues before resulting in such drastic measures. That said, there are specific considerations you should have at the back of your mind when signing the at-will employment contract.

There’s a gray area when it comes to signing an At-Will Agreement. Technically, you are not forced into signing it. However, that could be grounds for your employer to fire you if you do not sign. More importantly, even if you don’t sign the contract, it’s stated by law that the employment basis will be an At-Will contract unless otherwise.

When to think twice before signing an at-will agreement?

Chances are, you might have taken to signing the document based on your employer. If that’s the case, you should definitely take a step back to understand the promises your employer is giving you before accepting the offer. Typically, the court will treat the signing of the At-Will contract as your final word and will use it in any legal challenges you might face with your employer.

In any case, if your employer doesn’t honor the agreement they made through word of mouth after you’ve signed the document, there’s nothing you can do to change that. Beware of such commitments, especially if they are not written in a document.

Nearly all at-will contract employment are negotiable and flexible. Therefore, most employees take this opportunity to add a clause in that protects them from getting fired without probable cause. That can simply be done by a simple statement such as ‘good cause should exist before the termination.’

Additionally, there are no set of rules on what should and shouldn’t appear in the At-Will contract. Therefore, it’s up to the employer and employee to negotiate and come up with exact terms of their agreement. Above all, having wording that prohibits termination without probable cause in the contract is the best way for any employee to protect themselves in the At-will contract.