A nanny contract allows parents to place their ward(s) in the care of another individual, i.e., the nanny, in exchange for payment. Typically, this is the case with toddlers, but it isn’t unusual to require a nanny for kids up to 8 years of age. For contractual purposes, the nanny is considered an independent contractor, with the parents being the clients. Such arrangements may be for an extended period of time, or on an on-demand basis.

What exactly does a nanny do?

A nanny is in charge of caring for younger children when their parents are particularly busy. This includes attending to their basic needs, supervision, providing meals, and occasionally, a pick-up and drop-off service. Nannies are almost always paid an hourly rate to do those tasks, and may also be asked to perform certain daily household tasks as well.

Additionally, there are two types of nannies that parents may choose from – live-in nannies and a normal nanny. Live-in nannies, as the name suggests, are nannies that live with the children for extended periods of time. Other nannies typically follow an agreed-upon schedule and offer their services whilst abiding by said schedule.

A nanny is considerably different from a babysitter, as they don’t just offer temporary supervision. Instead, they tend to all the needs of the children, which is why they may be more appealing to parents.

Things to do before finalizing a Nanny contract!

First, clients will want to find a nanny that they feel comfortable leaving their children with. To do this, they should rely on word-of-mouth and take referrals directly from trusted members in their social circle. If that fails, there are a ton of online resources that can help set them up with a nanny, while offering a fair amount of protection. Typically, online platforms conduct background checks to help put the parents at ease. Many of them also conduct interviews with the nannies to judge for fit and try to connect them with the appropriate families. Finally, it is highly recommended that the parents themselves conduct a brief interview with the nanny before embarking on a working relationship.

A nanny typically costs $19/hour in the United States. This rate, however, is likely to fluctuate, with prices generally being higher in urban, metropolitan areas, while the countryside and more rural areas generally offer cheaper rates.

Before setting up and drafting the nanny contract, parents should also negotiate their rates, fix up a schedule, and conduct their own background check if they would like to reassure themselves.

The following particulars will have to be determined before drafting the contract;

Once the parents have determined those particulars, they can begin drafting the nanny contract. To help you out, we’ve devised a template that can be used as-is, or can be modified to better suit your situation and can be found below;

This contract is deemed enforceable upon signature as of the date __ (Date.)

The nanny hereby agrees to provide their service and expertise in one of the following ways;

For their services, the nanny is entitled to a payment of $__/hour. The client agrees to disperse payment at regular intervals. (This may be weekly, bi-weekly, monthly, etc.) Additionally, the client agrees to pay an additional amount of $/hour in case of on-demand service or overtime.

The nanny agrees to work for the client in one of the following capacities;

(a) As an independent contractor, which means the nanny will be liable for all taxes, insurance, and coverage.

(b) As a w9 employee of the family, in which case the nanny may be entitled to receive support with taxation, insurance and is entitled to federal and local coverage.

The client and the nanny may insert any additional clauses they feel are applicable here.

VII. THE AGREEMENT IN ITS ENTIRETY

The agreement explicitly detailed above hereby represents the entirety of the arrangement between the parties and hereby overrides any previous or existing agreement, contractual or not, that may have been in place prior to the signing of this contract. No additional clauses will be binding unless agreed upon by both parties. The parties, which collectively includes the client and the landscaper, hereby agree to the aforementioned terms and conditions. 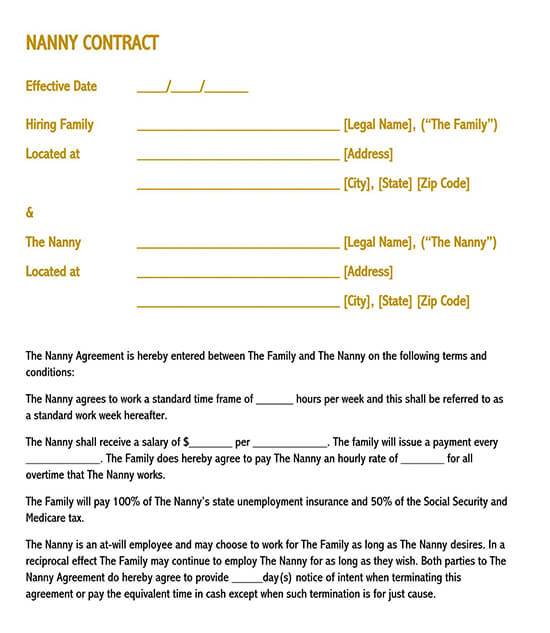 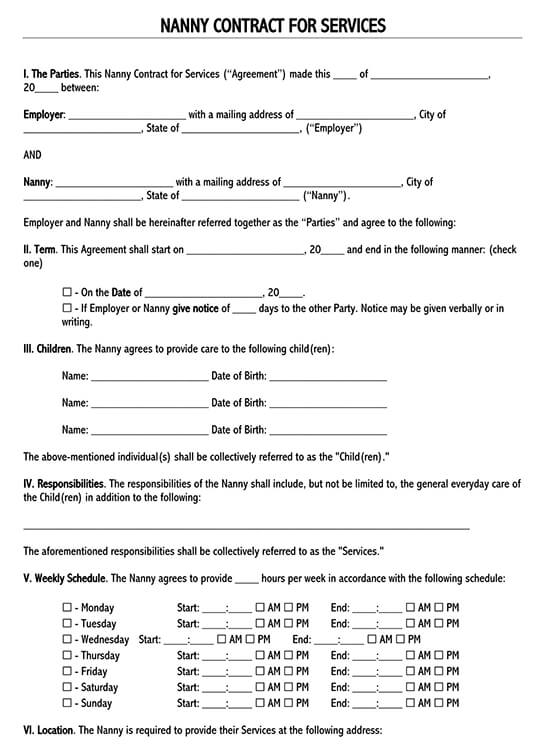 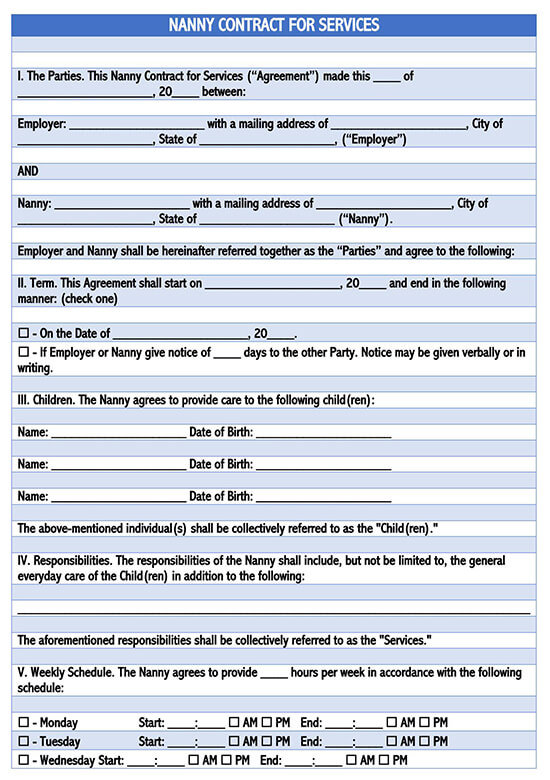 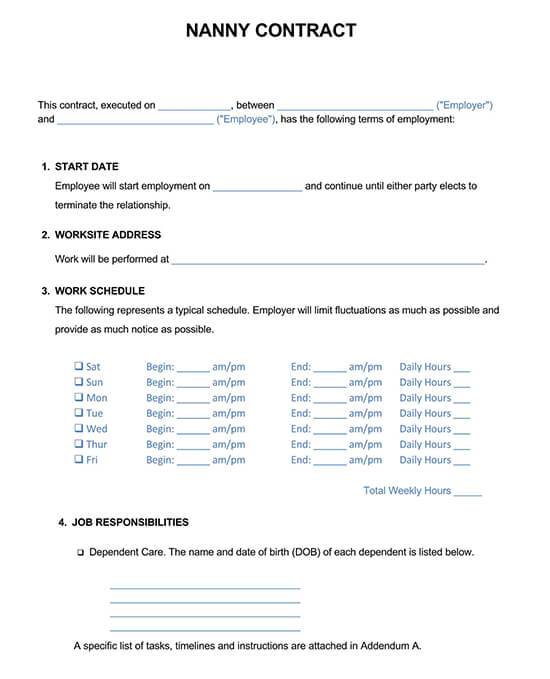 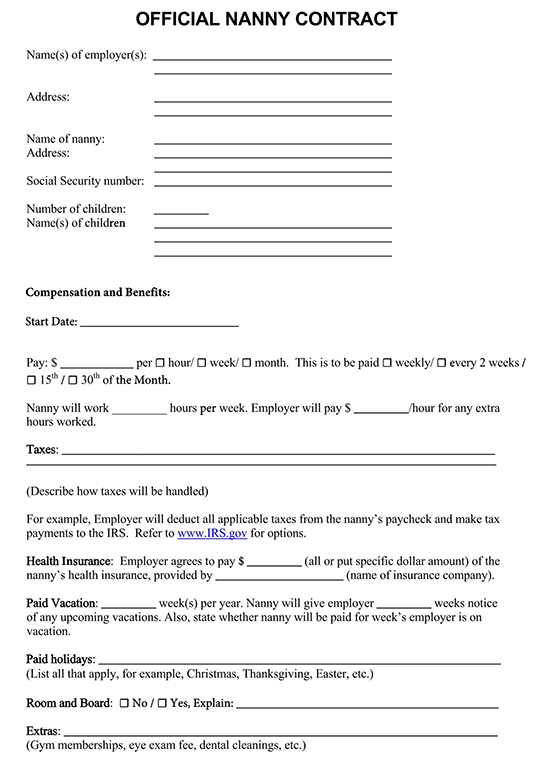 What should be included in a nanny contract?

A nanny contract should include the following – Nanny’s wages, A working schedule, Responsibilities, Discouraged activity, Benefits, Transportation or reimbursement, if applicable, Right to terminate clause.

How much does a nanny typically cost?

In the U.S, a nanny typically costs between $18-$20/hr. Live-in nannies are generally more expensive and charge a higher rate, as they will need to be paid for extended periods of time, rather than on an hourly, on-demand basis.