A breach of contract letter is used when two or more parties agree, and one either Party fails to fulfill the terms of the agreement. Not only is a breach of the Contract illegal but also a show of unprofessional. The afflicted party can take legal actions against the Party in violation of the agreement.

A breach of a contract demand letter is usually sent as a final reminder before taking any legal action. It sets out a legitimate claim to the Party in violation. Also, it states your rights and a demand for compensation, refund, or performance of an obligation.

Notice of Breach: What to Include

A breach of contract demand letter needs to explain the nature of the violation and clearly state what is to be done. It should clearly explain the quality of the breach, saying what requirements of the Contract have not been fulfilled. The clause breached should be quoted, along with an explanation of how it has been violated.

Consider the following when drafting a Breach of Contract Demand Letter:

Remedies for Breach of Contract

Before you decide on sending a Breach of Contract Demand Letter, you should always try other methods like discussing with the other Party in a bid to solve the problem. This will help you avoid escalating the situation to a level of conflict.

This remedy is used when parties agree to enter into a contract mistakenly, fraudulently, or due to influence and coercion. If the court concludes that there has been a material breach of contract or an offense serious enough to defeat the primary purpose of the Contract, then the court will approve termination of the Contract

Damages may be available for a breach that is considered nonmaterial or partial; this means that the Party that has suffered the violation has experienced some degree of financial damage but not to the extent that the primary purpose of the contract was destroyed. Restitution is meant to restore the injured Party to the position occupied before the breach.

Under particular performance, the party in breach of the contract has to perform its duties as specified in the contract. Specific performance is customarily used when money damages are not suitable to compensate the plaintiff.

It refers to the monetary payments paid by the breaching party for violating the terms of the contract. Subject to the nature of the breach, the court may rule that the plaintiff be rewarded the full or partial amount that they would have otherwise have received had the contract gone to completion. There are two types of money damages i.e.

This is the amount of money paid by the breaching Party to cover the loss incurred by the other party due to the breach of contract.

Punitive damages, unlike compensatory damages, are rewarded for punishing the party in breach of the contract to deter them from committing similar acts.

Sending the Letter of Demand

Most Contracts have a provision that defines how a breach of Contract should be notified to the breaching Party. For instance, one may be required to send the notice via fax, email, or registered mail. You must always use the methods stipulated in the Contract; otherwise, the letter might be considered not an official notice of the breach.

Whether the other Party responds to your letter or not is out of your control. Therefore you must include in the letter the next step you will take should they fail to comply with the demands made in the letter.

The Response to a Notice of Breach

After sending the letter, the receiving party may decide to respond in the following ways: 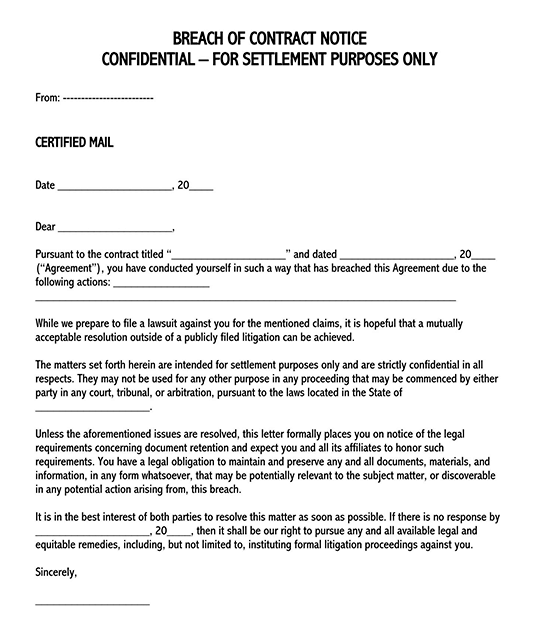 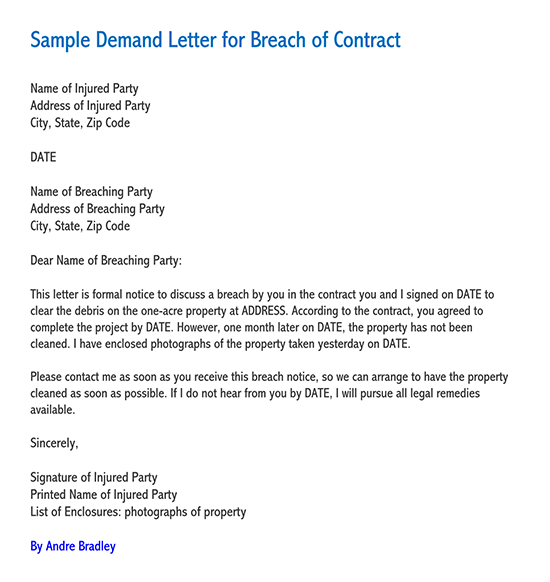 When can I send a Letter of Demand?

You had better send a breach of contract demand letter if you signed a contract and the other party in the agreement has failed to uphold the terms and conditions set in the contract, and you have unfruitfully failed in trying to resolve the matter.

What is the purpose of sending a letter of demand?

This letter serves as a warning to the party in breach that should they fail to adhere to its demands, then legal actions may be taken against them. The letter notifies the other party that they have breached the contract, which they might have otherwise not known they had.

What should I include in my letter of demand?

The letter of demand should be simple, clear, and direct to the point. Include the details of the contract, how the party has breached the agreement, and what they must do to fix the breach, and what will happen should they fail to correct the violation.