A Release of Liability Form is defined as a legal contract used by two parties. One party relinquishes their entitlement to legal action against the other party who is potentially liable for risk or claim.

This form can be used between individual-individual, individual-business, and business-individual. The release of liability form will typically be effective over a specified activity and does not cover liabilities resulting from acts of negligence.

In some cases, the release has to make a payment or meet certain terms or conditions for the form to remain valid. Once both parties have agreed to the form, it should be signed by the party “releasing” their legal or financial claims to be valid. After the signing, the release is in no way obligated to the releasor, and the releasor has no other recourse to reclaim the “released” rights or claims.

Note: A hold harmless agreement is a clause added to legal documentation by organizations or individuals to protect themselves from injury and damage claims that might happen to the party signing the agreement.

A release of liability is alternatively referred to as;

Parties Involved In the Process

The release of liability form binds two parties – the releaser and the release. These two are explained as:

A waiver of liability form will primarily offer two types of protection – legal and financial. The releasor cannot ask for financial compensation or take legal action against the release. In addition, the releasor enjoys protection by the document in that they are also not financial or legally tied or obligated to the releasee once it has signed.

Types of the Release of Liability Forms

The most common types of release of liability forms are:

The releasor forfeits all known and unknown legal and financial claims against the release with a general release. This type of release form is comprehensive and flexible to be applicable in most common disputes.

A mutual release is a type of release form customarily used in a situation when there is a broken contract between two parties. A mutual release is then used, stipulating that both parties give up any past and future claims against each other regarding the incident or contract as they believe each party is at fault. This release form ensures both parties are relieved from the contractual obligations without the lengthy legal process.

A medical release form is used when patients want medical practitioners to share their medical information with third parties chosen by the patient. The patient promises not to sue the doctor if the shared information is misused.

A lease agreement release form is used in stations where either the landlord or the tenant wants to quit a lease before its expiration date. As a condition for signing the document, landlords will often ask for one month’s equivalent rent, and the move-out date must be declared in the release liability. Neither party can then sue or seek financial compensation in the future as a consequence of the termination.

A location or event release form is used when a person or organization organizing an event at a specific location does not want to be accountable for any accidents in that location. Location waiver liability forms are more prevalent with academic trips and events.

A media release of liability is a legal document that grants authorization to the media houses or third parties to use the videos and photos of an individual for a news publication.

A photo release is used by anyone who wishes to obtain the right to use a person’s, entity, or any picture used for commercial purposes for a fee or free of charge.

A model form is expected in the entertainment industry. Production companies use it to obtain consent to use a model’s, actor’s, or a performer’s name, image, voice, likeness, and performance material. The entertainer (the releasor) will usually sign the document once set specific terms have been fulfilled.

A video release form allows third parties to use another individual’s or entity’s footage for publication purposes. This type of release form is helpful for private journalists.

A real estate lien form is used by property owners to remove a lien on their property once they pay the lienor their duly payment in full. This type of release form can be used in real estate and other personal property.

An individual uses a social security release form to permit third parties (such as doctors, insurance company or caregivers) to access their social security benefit information.

Third parties can request for veteran’s medical information for various purposes like treatment and collection of benefits. A release form can be used to indicate the associated veteran promises not to sue the Veterans Affairs Medical Centre in case the given information is misused.

Waiver for Damage to Property

A waiver for property damage is used to settle property disputes out of court. It can be used with personal property such as artwork, jewelry, or real estate such as land, building, etc. The at-fault party compensates the property owner for damages, and the property owner relinquishes their legal and financial rights.

Waiver for Participation in an Event or Activity

A waiver for participation in an event is used by entertainment companies or event organizers to relinquish their liability for personal injury to entertainers or participants during an event. Examples of scenarios when this type of release of liability form is used are yoga classes, rock climbing, paintball, skydiving, sports event, etc. However, this type of release form does not exempt the release from injuries due to negligence.

A settlement release form is used between a creditor/lender and a borrower to settle a debt. The parties negotiate and reach a mutually acceptable settlement, and as a consequence, either party dismisses their claims against each other. No further legal action or financial claim can be pursued once the document is signed.

When to Use a Release of Liability Form?

A release of liability form is utilized in different situations where one party can give up their privilege to legal and financial claims, or the other does not want to be accountable to specific liability. Often these will be when dealing with products, services, or activities that come with a particular risk or uncertainty. The form can be used as a stand-alone document or as part of a contract.

Some everyday situations where a release of liability is used include:

A release of liability form is also familiar with travel agencies and introducing products that have not been officially approved. It is then recommended that a consultant be hired to assess risks associated with a given activity, goods or, service to utilize the release form effectively and feasibly.

How to Write a Release of Liability Form

A release form should be detailed and specific to avoid misrepresentation of risks and misinterpretation of liabilities. Therefore, the more detailed it is, the more airtight and effective the document is. Fundamentally, when creating a release form, include all the following components:

Next, identify the parties bound by the liability release form. State the legal names of the releasor and the releasee. If the party is a person, their first, middle, and last name should be stated. If the party is an entity, provide the appropriate suffix such as Ltd, LLC, Corp, etc. Then the addresses of each party should be supplied.

The document then declares if there will be any payments made before its execution. Some situations will necessitate compensation while others won’t – indicate accordingly. If a payment is required, clearly state the exact amount that the releasee will have to pay. In other situations, the requirement can be any other transactions such as (in)action or transfer of a valuable item to the releasor. Again, the exact requirements should be specified.

Next, indicate the jurisdiction under which the release form will be enforced. Finally, indicate the state whose laws govern the execution of the document.

The release form should then outline any additional provisions applicable to the agreement in place. Some of these provisions include:

Lastly, ensure the release form is legally binding by indicating the signatories to the document. The releasor supplies their signature and indicates the date when they signed the form before indicating their name. The releasee then provides their name, signature, and date of signing accordingly.

To fast-track the process of coming up with an up to the standard release of liability form, we have provided our readers with free downloadable liability form templates readily accessible for use. They are professionally designed and easy to personalize. The use of templates is time-saving and ensures that the user is aware of all the information they need to provide to have a legally enforceable liability form. 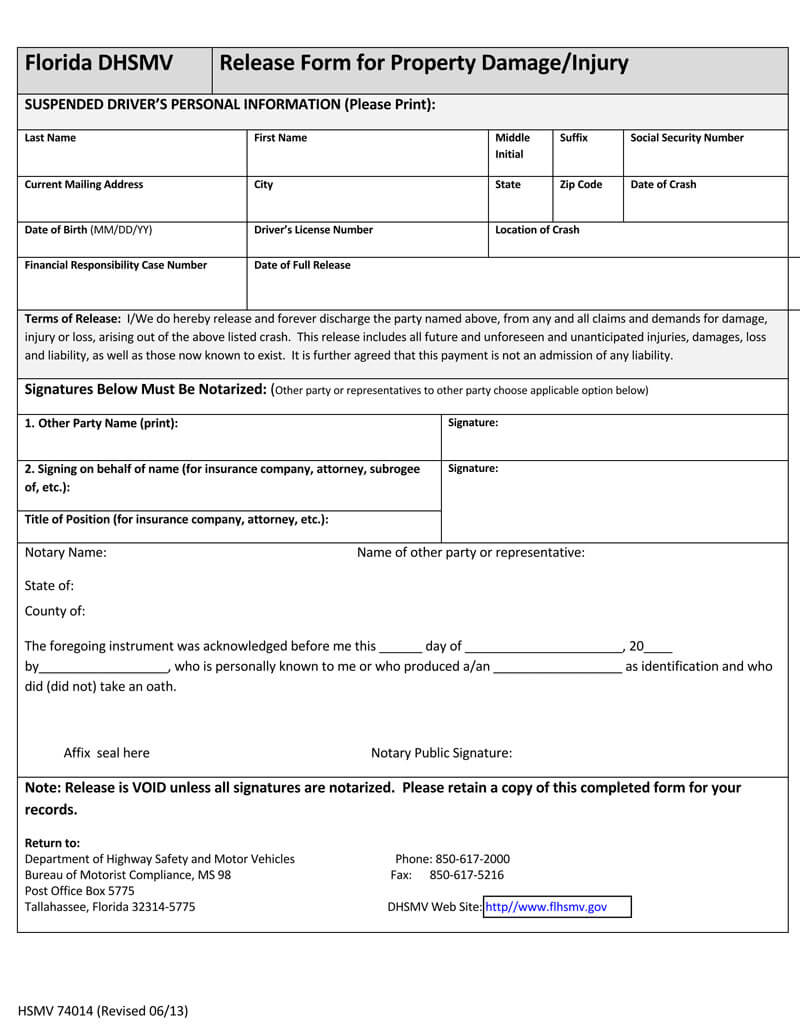 Steps to Obtain a Release of Liability Form

Obtaining a release of liability form is a simple process that makes it convenient for urgent situations. The process of getting a release form can be summarized into three steps discussed below:

Begin with determining the legal requirements of using a liability waiver in the applicable state. Depending on the state, the legal requirements for preparing and utilizing a release form will vary. For example, a release form should be provided when selling a vehicle in some states like Florida, California, and Texas. In other states, it does not have to be signed to be legally enforceable.

Draft a release of liability form

Once all the legal requirements have been determined, prepare the release form under the state’s law requirements. The use of a release of liability template is acceptable, as well as creating one. The releasor and the releasee then review the contract and determine if it is acceptable.

Lastly, if the implementation of the release form requires that some terms and conditions be met, they should be fulfilled before or at the time of signing the document. Once signed, the document is valid and legally enforceable.

Release of Liability of Transfer for Selling a Car

When selling a vehicle is one of the most common applications of a release form. This is because the seller technically remains the liable owner of the vehicle until the official transfer of the vehicle’s title and registration.

The release form transfers these obligations to the buyer before the DMV processes are completed. In most cases, the release form has to indicate the vehicle identification number, odometer reading, and sale date to prove their ownership of the vehicle.

Risks of not Using a Liability Form