A character reference letter for court is a formal document that provides a written statement about the personality and mental stability of the defendant to help the judge understand the defendant better when making a decision.  It’s written to show support in favor of the defendant.

For it to be persuasive, the person writing must prove to the court that they know the defendant very well.  It should bring out the other positive side of the defendant and their contribution to society to help the judge see them in a different angle. The character reference letter should also show maximum respect to the court and it should never be written in a way that undermines the defendant’s case.

Since it’s a very important legal document, a character reference letter should be factual and professionally written for it to be effective.

Who Can Act as Referrer?

Although the court does not give a specific condition on who can write a character reference letter in support of the defendant, there are a group of people who are most recommended. It’s advisable to pick a person who has known you for a very long time and one who is likely to draw respect and attention to the court.

The following cadre of people can act as good referrers:

The first priority should go to members of your nuclear family.  This is because they can testify better since they have a longer and deeper history of the defendant than any other person. If an immediate family member is not available, a closely related relative can write a character reference letter in your support.

For defendants who are formally employed, getting a co-worker to write a character reference letter is also a good choice. The best option is a person who is more senior than you in your workplace.

Your friend who happens to be your closest associate can also act as a referrer. They will need to prove to the court that they have known you for a longer period and that you are a person of good character.

The primary objective of the character reference letter for the court is to support the defendant by helping the judge clearly understand the defendant’s personality type and historical morals. Referrers (mostly family members, friends, medical professionals, or co-workers) testify in a written statement about the defendant’s traits.

A character reference letter is primarily used in a court of law for three major cases that include:

Suppose you have a loved one who has been convicted and faces criminal charges like killing. In that case, you can provide the court with a character reference letter to show the judge that the defendant’s offense was very unusual and unexpected, going by his known personality.

The letter tries to prove to the court that the defendant is a person of good character and that his recent ill behaviors were uncommon. When the court is well persuaded beyond reasonable doubts by the contents of the character reference letter, it proceeds to give the defendant a fair punishment.

If a person has been convicted due to drunk driving incidence (DUI), you can write a character reference letter for the court to convince them that the defendant rarely drinks and drives. The letter will be more convincing if you happen to have known the defendant for an extended period and witnessed him driving.

If the defendant is dealing with custody of children after separation or divorce, you will write a character reference letter for the court describing them as a caring person. It’s highly advisable that the person writing the character reference letter for the child custody case be a person who is very close to the defendant. The court will be more convinced if it’s a person who knows all aspects of the defendant’s lifestyle, like a family member or very close friend.

To increase the chances of the court making a fair ruling, the person drafting the character reference letter is highly encouraged to engage an experienced lawyer to review the document first before submitting it to the court.

It’s essential for the person writing the character reference letter for the court to understand that this is an official document, and any false statement or forgery can lead to prosecution.

How to Write a Character Reference Letter for Court

Since this is an official document that will be used in a court of law, the author must submit a well-written document to persuade the judge to make a fair ruling. Although there is no standard format that must be followed when writing the letter, there are specific sections that every author must include when drafting a character reference letter:

The introduction segment is where you bring out your main objective of writing this character reference letter. You will be required to clearly stipulate the details of the defendant and show the court that you have a strong relationship that has enabled you to fully understand their personal traits. You must also tell the judge why you think you are the most appropriate person to write this letter in support of the defendant.

Section 3: Body of the letter

In this section, you will cement your facts in a more detailed manner. You will need to convince the court that the defendant has always been a good and law-abiding person. You will need to provide crucial information like:

Here, you should emphasize what you said in your introductory paragraphs and tie it with a personal touch in favor of the defendant. You can even assure the judge that you are available to confirm in person that the details you have provided therein are factual and nothing but the truth.

Lastly, you will be required to append your signature and name to make the character reference letter legally binding. Doing so is proof that you have given factual testimonies in support of the defendant. Also, remember to provide your phone number and email address so that the court can contact you easily for further inquiries.

We have prepared this guide to provide you with a customizable template for drafting a character reference letter for court:

My name is —————————- (Insert your name) and I’m writing to you because my co-worker———————— (his name), has been charged before your court for drunk driving. I have worked with —————————— (his name) for over 10 years at ——————– (name of the organization) and he/she has been the most disciplined member of my research team. I have also known my co-worker and close friend as a very hardworking, charismatic, supportive, and a great caring parent.

I was very astonished by the reports about his/her recent offense in which these charges have been preferred against him/her. However, I’m aware that it’s only three weeks since——————————– (his name) lost both of her parents through a tragic road accident and they are yet to come into terms with this sad incidence. I’m certain he/she is not mentally stable and that could be the main trigger of his/her unusual behavior.

I understand the dangers of drunk driving and the risks that ————————— (their name) caused to himself and to other road users. As an active member of the society, I know that —————– (name) is now remorseful and he/she is ready to be a law-abiding citizen. I will ensure he/she sees a psychological therapist to help them deal with their current weak emotional state.

Although it’s indeed true that he/she committed the said offense, I would like the court to understand that it’s their first ever violation of the law—————– (confirm with the registrar of state records before stating this fact). As an upright and hardworking person who have contributed immensely in our society, I believe that ————————– (name) has learnt their lessons and they will never repeat the same offense again.

TO: The honorable Franklin Clayton

My name is John Smith head of sales department at Terra Foods Limited and I’m writing to you because my co-worker Patricia Kensington has been charged before your court for drunk driving. I have worked with Patricia Kensington for more than 7 years and she has been the most disciplined member of my sales team. I have also known my co-worker and close friend as a very hardworking, charismatic, and a great caring parent too.

I was very astonished by the reports about her recent offense in which these charges have been preferred against her. However, I’m aware that it’s only four weeks since Patricia Kensington lost one of her child in a house fire incident. I know that she is currently emotionally weak and she is still digesting the sad new and mourning.

I truly understand the risks caused by drunk driving that Patricia Kensington unknowingly put herself in that situation. As an active and respected member of our society in different cadres, I know that Patricia Kensington is now remorseful and she is ready to be a law-abiding citizen. I will ensure that she gets to see a therapist for a professional advice on how to deal with loss.

While it’s indeed true that she had committed the said offense, I would like the court to understand that it’s her first ever violation of the law. As an upright and hardworking person who have contributed immensely in our society, I believe that Patricia Kensington has learnt her lessons and she will never repeat the same offense again.

I’m optimistic that the court will heed my plea and give Patricia Kensington a lenient sentencing or acquittal.

In case you have any questions, reach me via +1 258 3098 4738 2 and through email by [email protected] for any further clarification of my written submissions.

Apart from the template and sample provided above, we have professionally crafted templates for you that can be used after being customized as per needs: 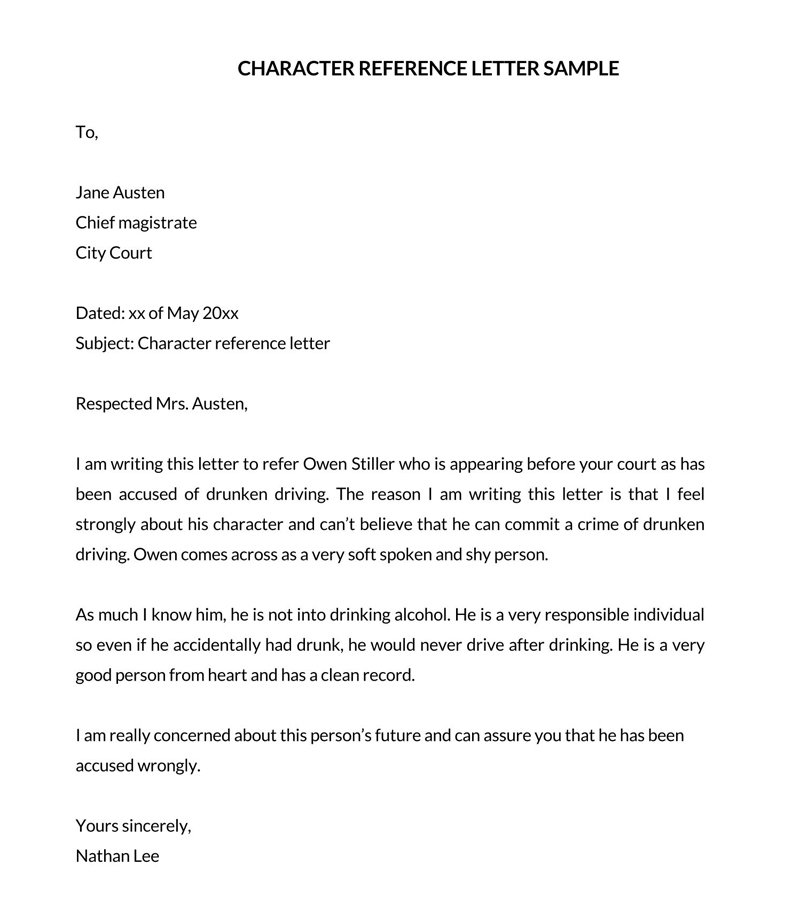 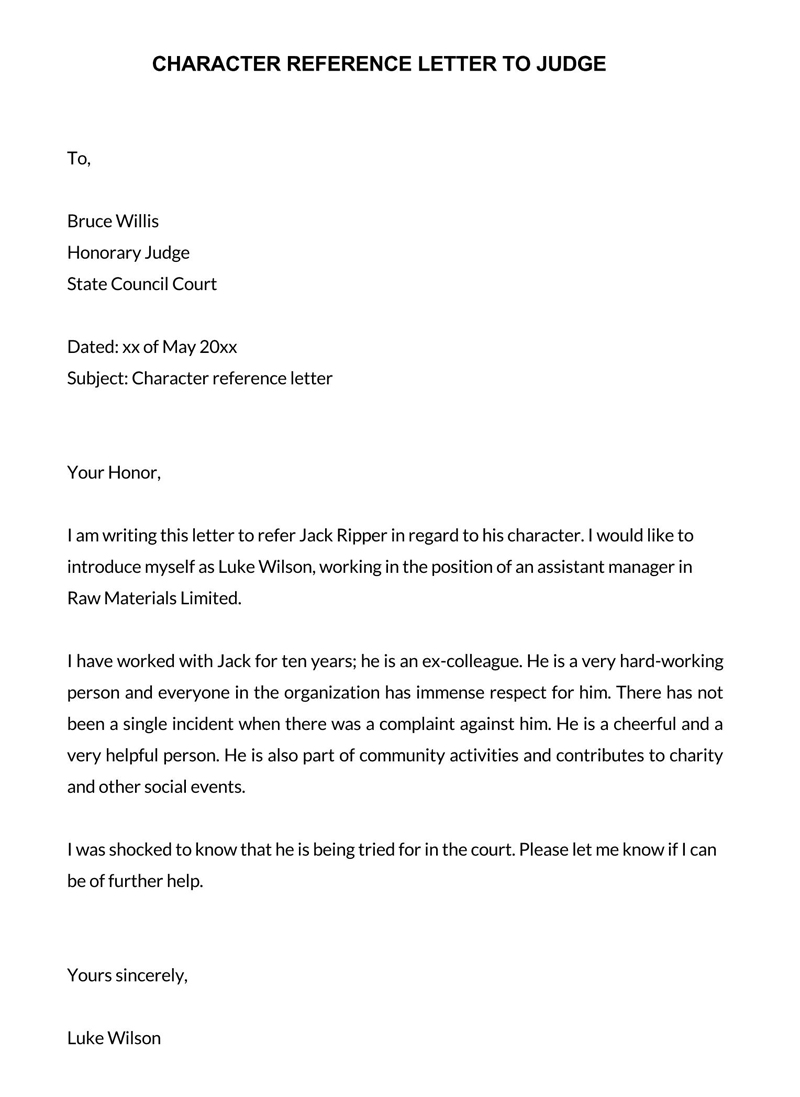 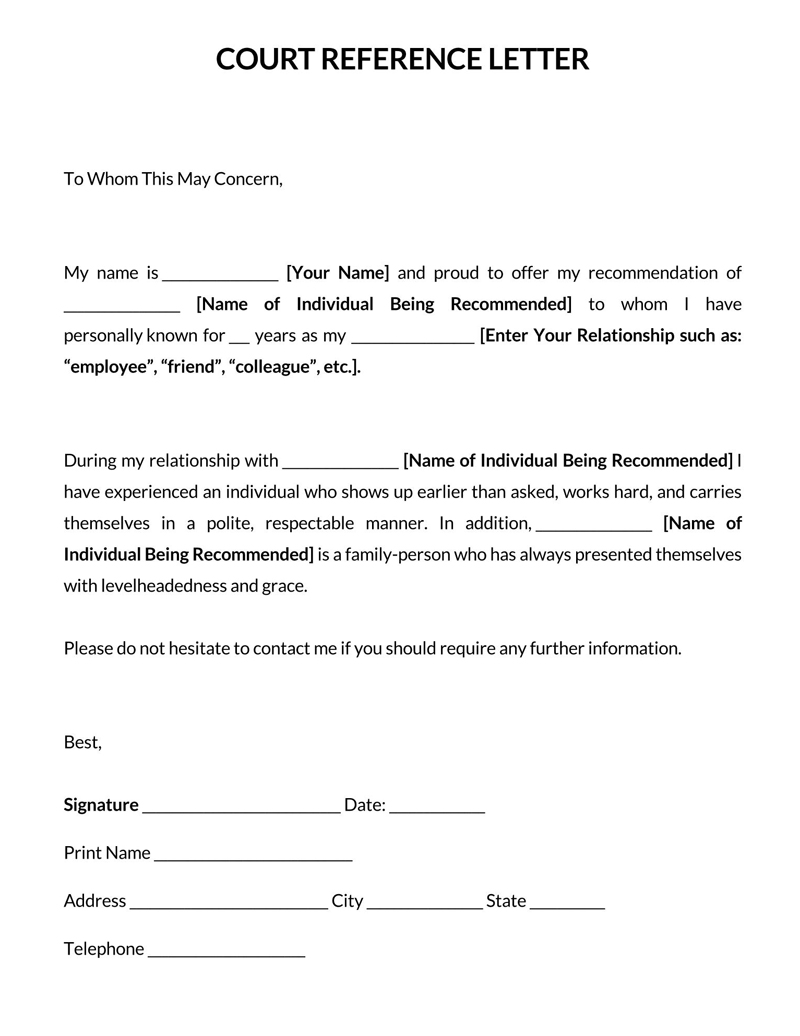 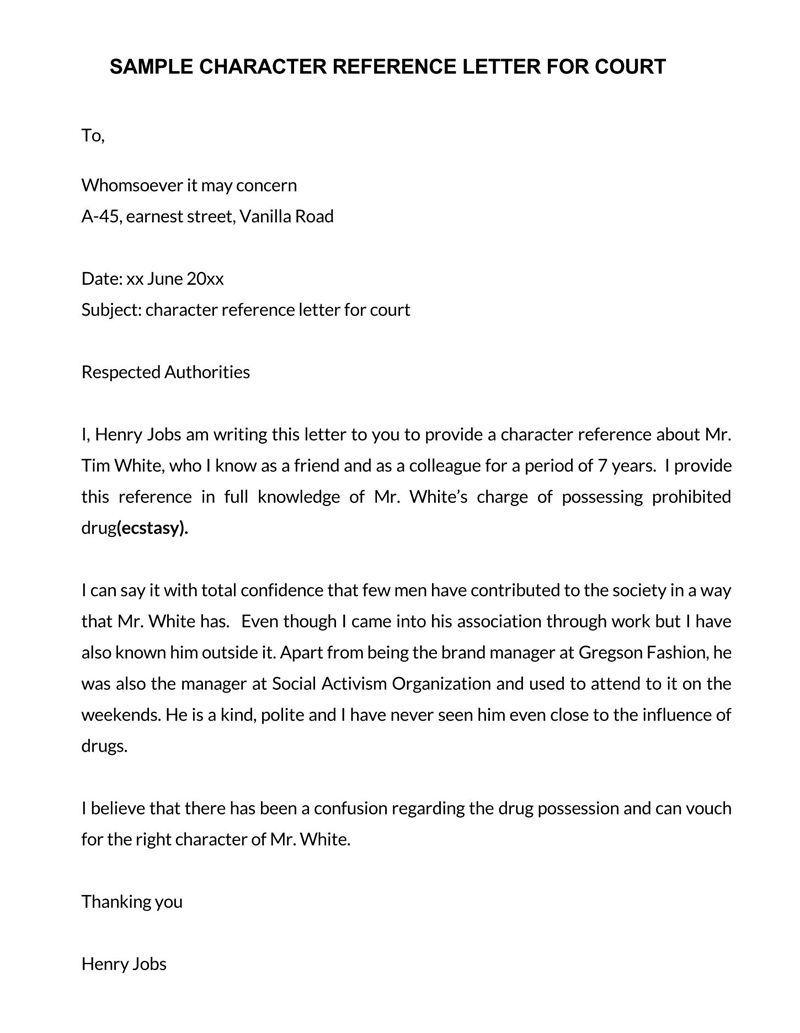 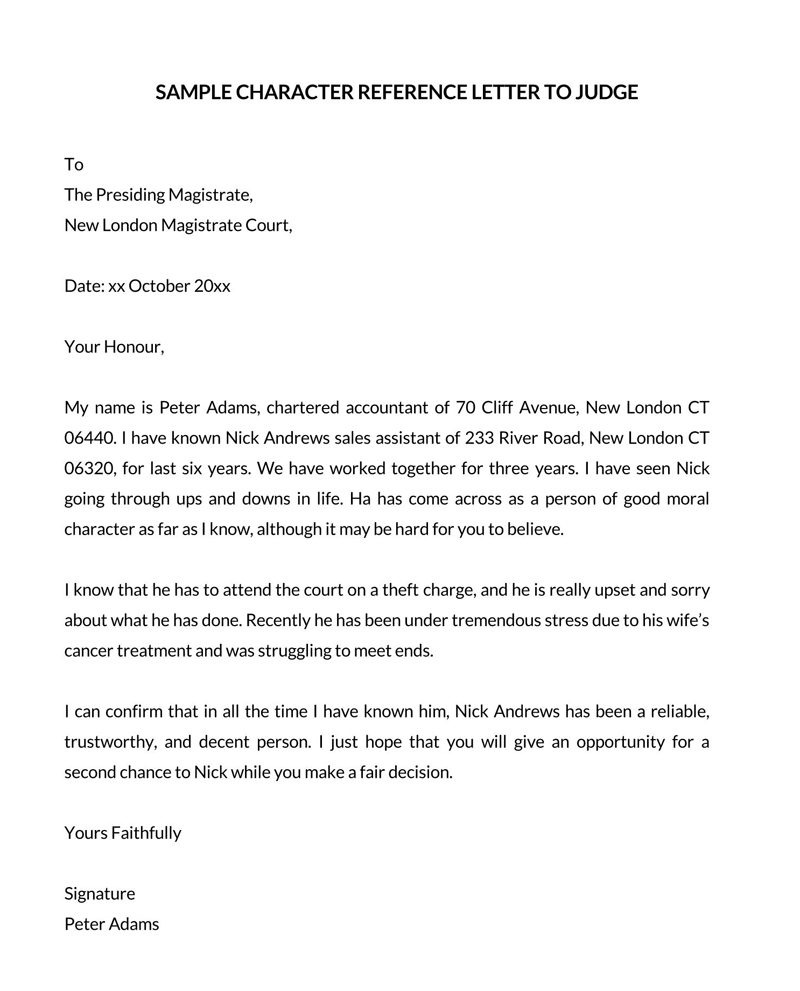 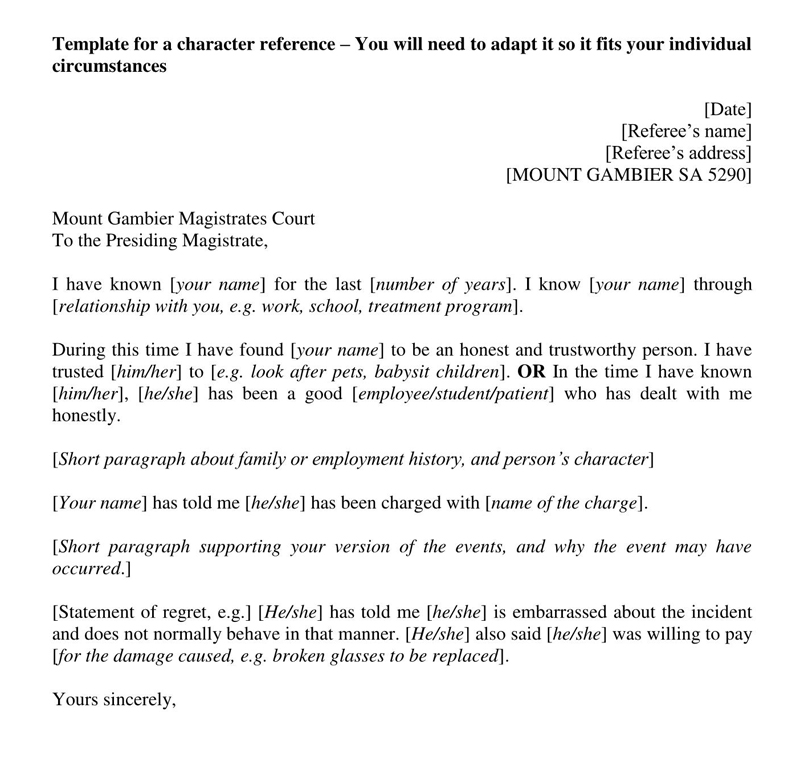 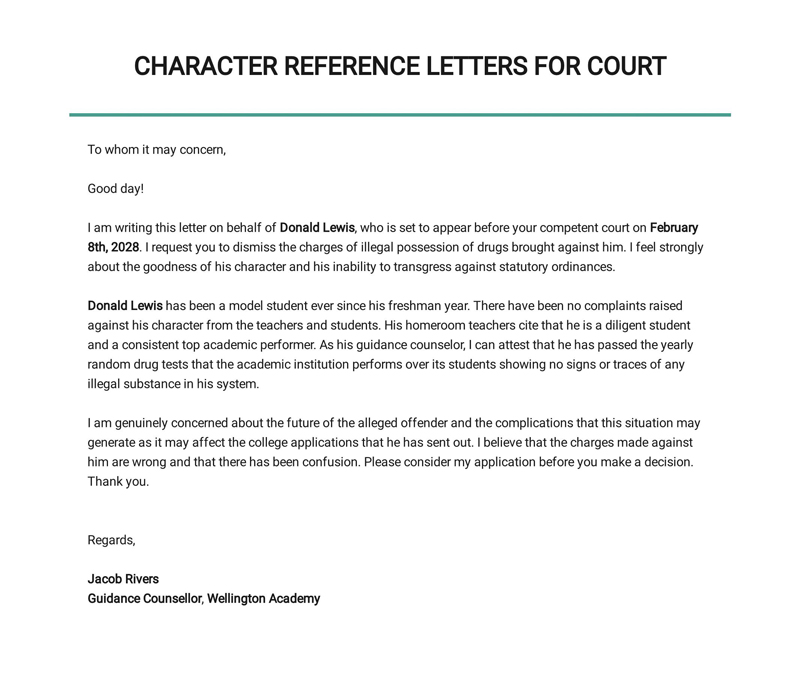 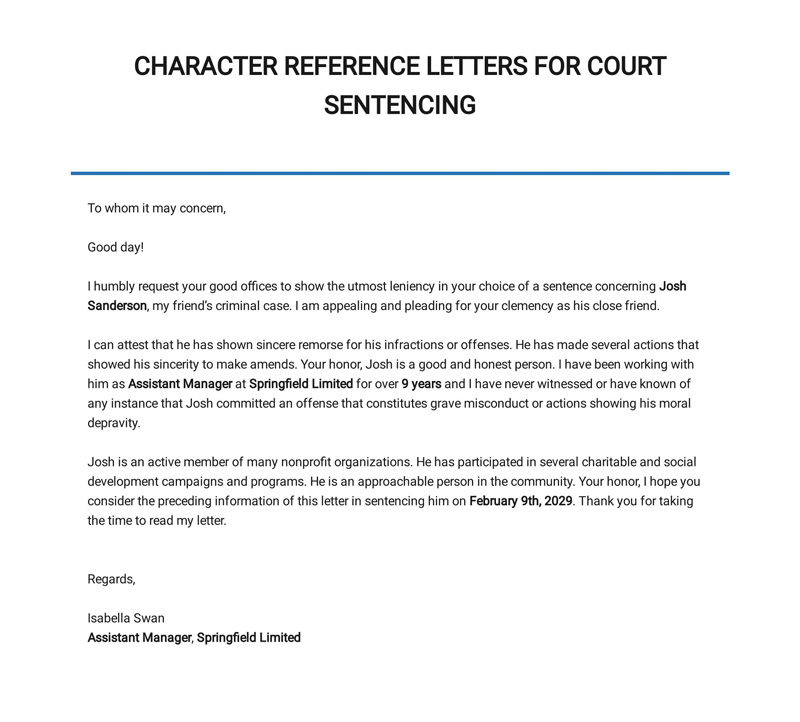 There are a number of guidelines that you need to follow when drafting a character reference letter to convince the judge and also uphold your credibility as a referrer.

There are some things that should never appear in your character reference letter.