Through the formation of relationships or networks, business transactions, agreements, friendships, and many other activities in society are conducted. To form these networks, people need to be introduced to each other. It is through these relationships that we can access various resources and opportunities. Introductions can be made in a formal or an informal setting. Everyone at some point has had to introduce someone to someone or be introduced. An introduction can be made in person, by email, or via online social platforms. An introduction is a short part of conversations; however, its benefits are unlimited. It also shows a person’s good intention to help two people grow.

An introduction is a respectful way of initiating and establishing a relationship between two people who previously did not know each other. They help create rapport between two strangers. The objective of making introductions is to let the person you are introducing to know whom the person being introduced is and any other relevant information about them. Introductions are an important element of socialization.

How to Introduce Two People Over Email

Introductions do not necessarily have to be in person; they can be carried out via email. This is because you might be introducing two people in different locations.

To ensure you make an effective introduction via email, you can do it following the steps below.

Firstly, you should ensure that you state the person the email addresses (the recipient). Often, this is the person with a higher ranking or seniority than the one being introduced. In other cases, it is the person you have known longest. The name comes after the subject and is a courtesy gesture as much as a formality.

In cases where you are introducing yourself, and you do not know the recipient’s name, it is okay to skip this step.

State to them your purpose

The next step should be to declare your intent to make the introduction. A statement of intent ensures the email goes direct to the point. You can choose to use any of the following introductory phrases depending on who you are introducing the person to, their rank, how long you have known them, and the setting in which you are making the introduction, at work or otherwise.

The first version is a bit more formal than the second and can be used when introducing someone to senior staff in your place of work.

Write the name of the person who is being introduced

After clarifying that the email’s purpose is to make an introduction, you can then state who you are introducing by indicating their name. This is usually the person with a lower ranking or the one you have known for the shortest time. In cases where you are introducing two people or more people, indicate each person’s name starting with the one with the highest ranking.

This is a chance for you to make an impression by providing a little more information, other than the name(s), about the person being introduced. You can include information such as career, interests, skills, or other qualities that would be of value or interest to the other person. For example;

John has been a professional videographer for four years, and I believe he would be very resourceful in your advertising projects.

You can also share your personal opinion, like why you find them worthwhile as a colleague or friend.

Mr./Mrs.[Name 1] it is my pleasure to introduce Mr./Mrs.[Name 2]. He/she is a young, charismatic [profession, for example, Data analyst]like yourself. I’ve known him/her for five years now, and I have seen him grow in his/her career to become Chief Data analyst at [company’s name].

[Name 2], [Name 1] is an expert in[profession] with more than 15 years’ worth of experience, and it is my belief he/she would be very resourceful in the growth of your career.

I’ll let you two take it from here.

An introduction can vary due to different reasons, as mentioned earlier in this article. Therefore how you introduce someone to a senior staff cannot be the same way you introduce them to a friend.

I want to introduce you to Harvey; we have been friends for as long as I can remember before he even founded Hann robotics. He has a passion for technology and is an excellent chess player, which I believe you’d like to see for yourself by challenging him to a game.

I’m introducing you two because I believe you share an interest in automobiles which would be beneficial if you got together and exchanged ideas.

Amy, Barney is a professional race driver and has been for ten years. He was won three major titles in his career span, giving him firsthand experience on the track.

Barney, Amy is an automobile engine specialist at MagiX Automobiles. A career she has excelled in. I believe she would be of great assistance to you in your upcoming race projects.

Do not hesitate to reach out.

Introducing your colleagues of different ranks/departments

When introducing staff members of different ranks or departments, it is customary to start with those in the higher ranks and senior departments.

I take this opportunity to introduce Ms. Campbell; she has joined Bigtym Electronics as our receptionist. She is well capable of carrying out her duties. Campbell, Mr. Don is the company’s manager and has been with us for six years. He has been very instrumental in the growth of the company from a small to a medium-sized enterprise.

Mrs. Ford I would like you to meet Mr. Smith, he has recently joined Halo Printers as the head of security. He has an excellent history and vast experience in his field, and it is my belief he will be beneficial to this organization. I have copied his email should you wish to communicate further with him.

Mr. Smith, Mrs. Ford is the company’s Managing Director. She has been with us since the company was founded.

Introducing professional clients to your team

In such a setting, it is recommended that you always begin with introducing the client even in the presence of high-ranking staff members. It helps show the client of their value to the company.

Dear Whom It May Concern:

I’d like to introduce you to Marcos and Juan, and they will be the people tasked to do the air conditioning installation in your offices as agreed. They are competent in their work and will ensure you get the best air condition system available, and by the day you requested.

I am pleased to introduce Mr. Winks; he will be the coordinating supervisor on the upcoming borehole drilling project to be carried out on your farm. He represents the company on the ground. You can consult him on any matter concerning the project, and given his extensive experience; it is my belief you will find him very resourceful.

Mr. Winks, Mr. Wells is a client of ours for whom we are to provide our drilling services. He is very understanding and also knowledgeable in water supply systems.

It is my belief you will develop a mutually beneficial partnership in this project.

Doing an introduction and doing it well can be a challenge regardless of whether you are making it in a formal or informal setting. That is why we have provided free downloadable templates that you can customize to fit your needs. They will help you reduce the workload of drafting your introduction from scratch anytime you want to make an introduction. Download! 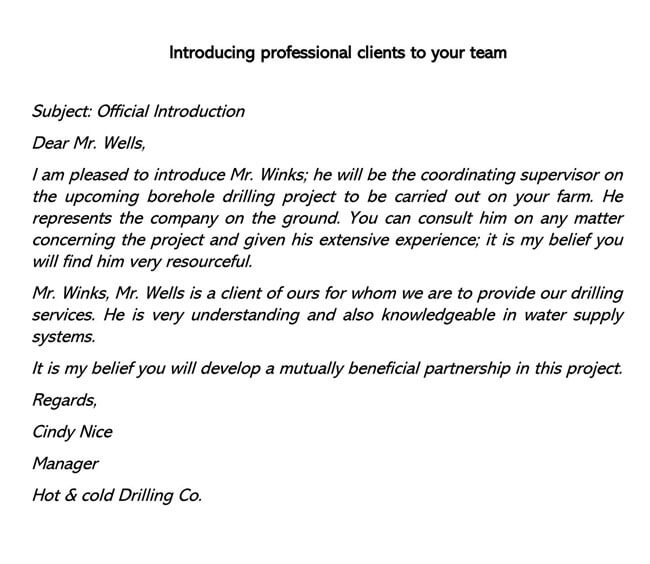 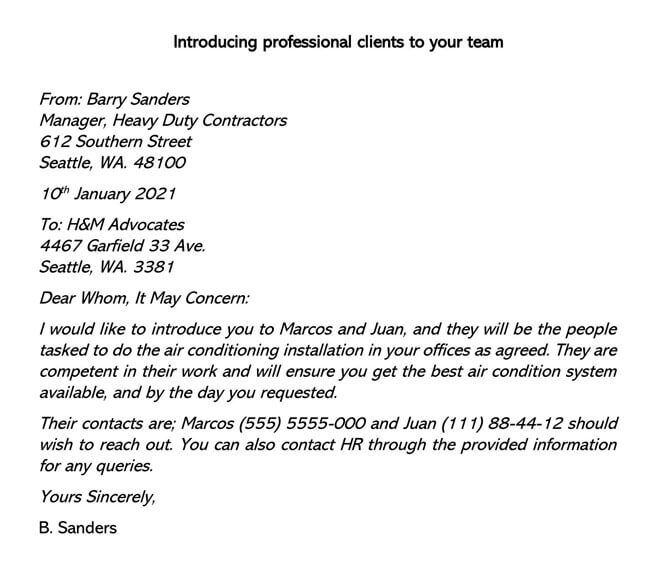 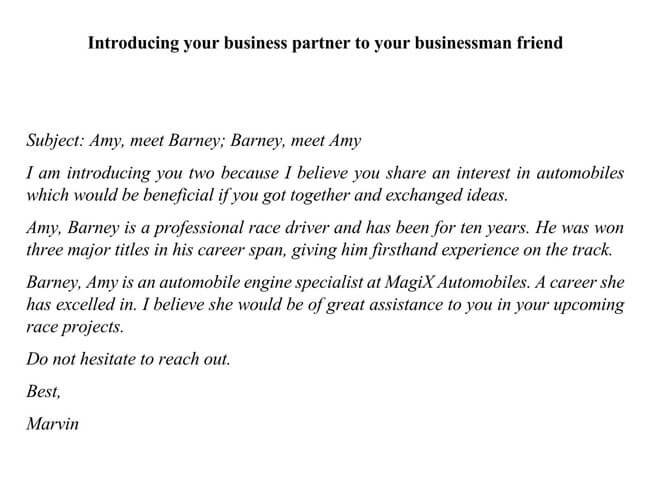 Introducing Your Business Partner to Friend 01 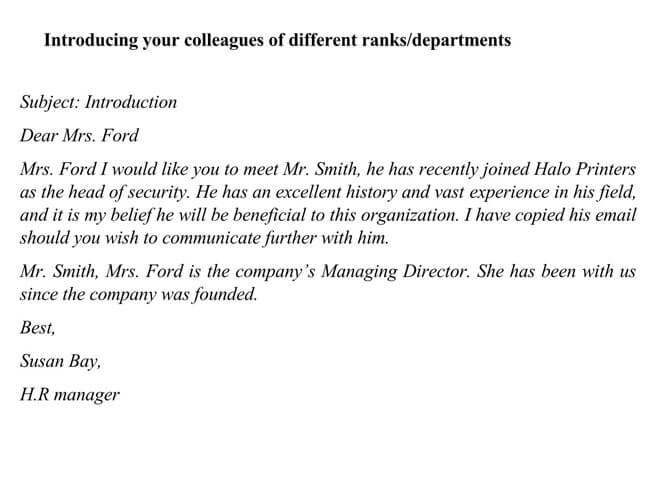 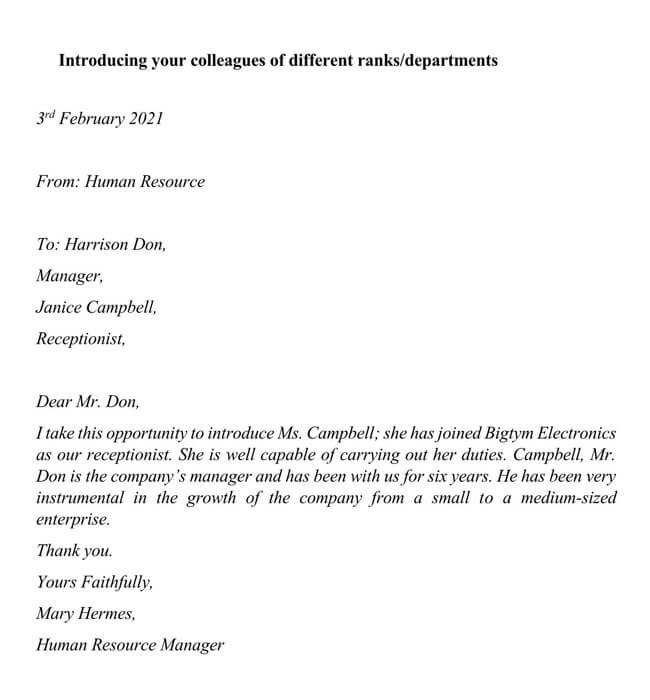 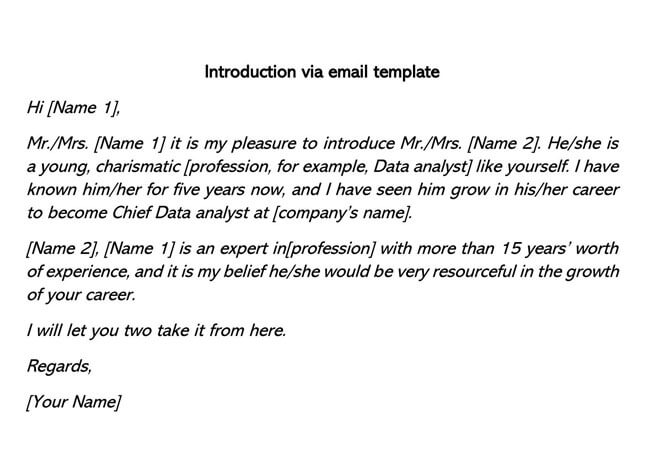 There exist several techniques you can use to improve your delivery and content of your introduction. If well implemented, you can effectively achieve your objective when making introductions.

Some of these techniques include;

In-person introductions are those made during seminars, at workplaces, trade shows, and other events.

Before you make an introduction, it is essential to ensure you are familiar with both parties to a significant extent. Ensure that you acknowledge the seniority as necessary; this is usually towards the person you are making the introductions to. This can be done by addressing them by their title.

Making eye contact with a person while conversing helps you to get their attention. During the introduction, eye contact makes you seem genuine and confident about what you are saying. These are two elements you want your introduction to have. Eye contact should not be confused with staring; it should be periodic and momentarily.

In most cases, an introduction will be short; however, you want to market the person you are introducing as valuable as possible. Therefore one has to be clear in terms of audibility and specificity on what they are saying. This ensures you capture the relevant information in a short span. Talking slowly helps both parties capture all the information.

To some people, a handshake is a way to connect with people and a way of learning a person’s character. In an introduction, after both parties have been acquainted with each other, they can shake on it as a formal acknowledgment of each other.

The use of titles is essential, especially informal settings. It is a sign of acknowledgment of their rank as well as respect. Titles could include the following but are not limited to a doctor, professor, Mr, Mrs engineer, and many more.

Email is another formally acceptable means of introducing two or more people to each other. There are various ways you can improve your introductory email.

Giving both parties more than one reason why they should get to know each other improves the value of the relationship if it is to be formed. You can do this by indicating the person’s skills, interests, talents, and abilities. It would be more convincing to a senior person if you or the person you are introducing has various important skills to his profession.

Before writing the introduction email, it is courteous to check if both parties are willing to be introduced, especially senior staff members. However, in cases where you are introducing yourself to someone you do not know, you can skip this step and proceed to introduce yourself.

It is advisable not to include phone numbers without getting a go-ahead from the parties involved. Some people do not appreciate their numbers being shared due to various reasons such as security, position, and need for privacy.

Continuous introduction of different people to the same person can be irritating to that person and might seem like you are abusing your access to them. Therefore, it is good to confirm with the person if at all they want to be introduced to people.

It is recommended that you introduce people you are familiar with and proud of. Introducing people with questionable characters can be seen as a reflection of who you are. In the case you do not know someone well enough, refrain from introducing them as later on, they might turn out not to be who they claim they are. Remember, people want to be introduced to people who add value to their businesses, career, or lives.

Is it okay to use pet names while introducing people?

It is not advisable, especially in a professional setting. This is because the person you are making introductions would not take you seriously and therefore beating the whole purpose of making the introduction.

Is it appropriate to introduce people via email?

Yes. Email is an acceptable way of making introductions. Emails are an efficient method of introducing people who are far from each other or when dealing with people in senior positions who might not find the time to meet in person due to their busy schedule.

Yes. It is one of the different common ways to increase your network, professionally and socially. This is because new relationships and connections are formed, which in turn increases a person’s social circle.

How to Write a Letter of Introduction for Employment (Samples)

How to Write a Business Introduction Letter (Examples)

How to Introduce New Team Members (With Examples)