A Job Promotion Letter of Intent also referred to as a “Promotion Request Letter,” is a letter written by an employee to their employer, requesting to be promoted to a higher position or job title within the same organization.

The job promotion letter is meant to inform the employer of the position the employee is asking for as well as convince them of how such promotions would be beneficial to the organization.

Most companies require that any formal requests such as job promotions directed to the management be made in writing. As such, it is important to know how to properly craft a job promotion letter of intent.

Here are steps to follow when writing the letter:

Employers usually get tons of letters every day. It is therefore recommended that when writing the letter, you make your intentions clear in your first paragraph. Start by stating who you are, your job title, why you are writing, and mention the position that you are requesting to be promoted to. Also, make sure to mention your current department and role to make it easier for the employer to understand who you are- this is especially important if you are requesting a promotion in a large company.

Next, describe how your skills, experience, and qualification, suit the position that you are looking to be promoted to. If relevant, consider including your education details, work history, and any other unique skills and credential that you have to increase your chances of being awarded the promotion.

After mentioning why you are qualified for the position, mention some of your accomplishments that you have made in your current role in the organization. Since the letter is formal, we recommend that you use numbers to back up your claims.

you may consider stating that you created a sales campaign that led to 85% conversion and sales increase and oversaw an annual budget of $9 million. These figures are important as they help the employer understand why promoting you will be beneficial to their organization.

Explain why you want the promotion

Inform the employer why you are requesting to be promoted to another position. Include your career goals, professional plans, and how being promoted to that position will play a major role in helping you achieve them. It is important that when explaining why you want the position, you convince the employer that you are ready to tackle all the duties and responsibilities that come with the position.

Inform the employer how promoting you to the position you are requesting will benefit the company. Stating how such promotions will work for the company may help the employer when making their decision to promote you over other applicants.

Close on a positive note

The last step is to end the letter positively by thanking the employer/management for considering your job promotion request. It is important to note that job promotion requests may go either way. The decision is normally up to the employer or management to make. Either way, make sure to inform them that you are looking forward to their response whether they decide to grant your request or not.

A Job Promotion Letter of Intent should have a standard business format and the tone used should be professional yet friendly.

The template and sample below shows, the format, and tone that should be used when writing:

I, __ [Your name], am writing this Job promotion letter of intent to inform you of my intent to be considered for the position of ____ [Mention the position you are looking to be promoted to]

In my time working as __ [Mention your Current position], I have proven myself to be an asset to ___ [Organization’s name] by ensuring that ______ [Mention some of the things that you did in that position]

As _____ [Position that you are applying for], I will be able to bring additional value to ____ [Organization’s name]. __ [Explain how you will add value to the organization]. _____________ [Express your gratitude to the employer/management for the opportunity to apply for the promotion and your application being considered]. ____ [End the letter on a positive note and let the employer/management know that you are looking forward to their response].

I, Jane Mac Kenzie, am writing to inform you of my intent to be considered a candidate for the position of Sales Manager. Working as a sales and marketing coordinator at Coca-Cola Industries New York, I have proven myself to be an asset to the organization by ensuring that all sales are finalized and ensuring that orders are delivered on time. By employing this strategy, I have exceeded the annual sales target five years in a row.

As the Sales Manager, I will be able to bring additional value to Coca-Cola Industries by having the entire sales team focus on lead generation and order fulfillment. If promoted to this position, I will be able to tackle the new challenges and responsibilities that come with the position. I will also be able to acquire and maintain new small independent suppliers in the local sector, thereby increasing the sales margin.

Here are free downloadable templates that can be personalized accordingly: 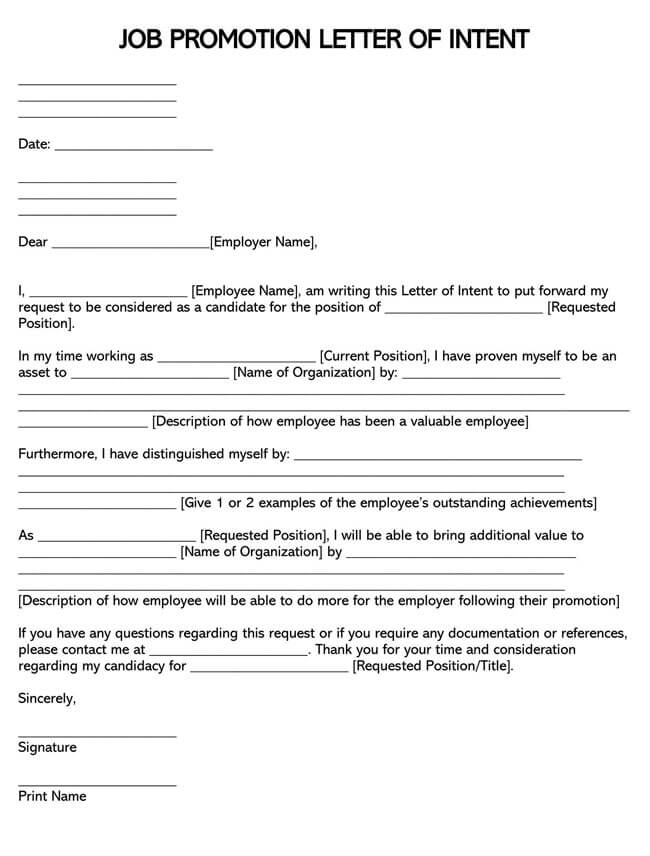 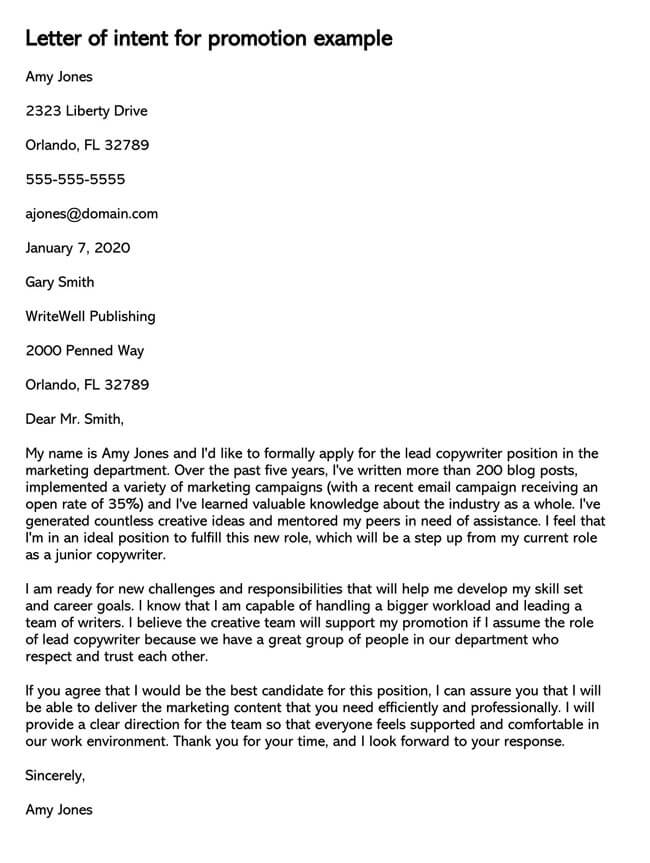 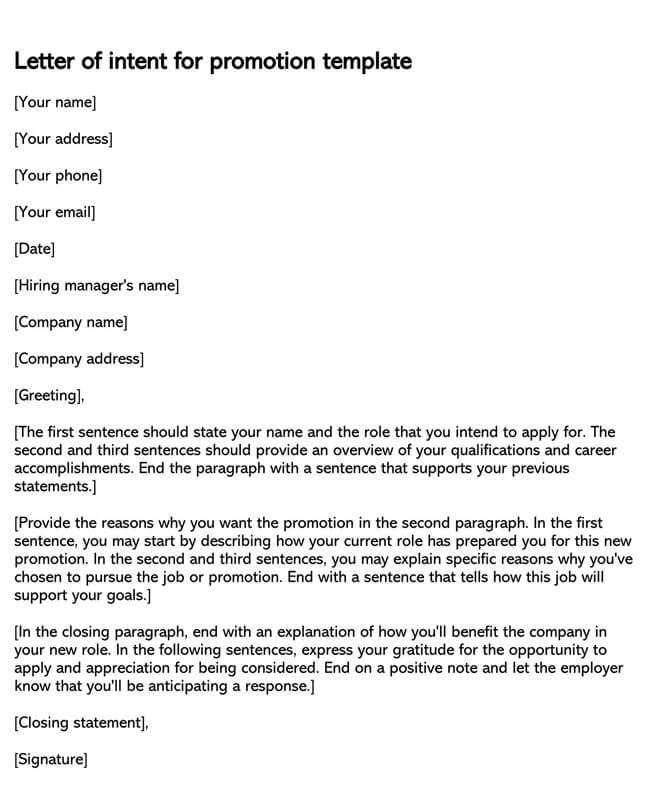 In most companies, you will be required to write a letter to the management or the employer informing them of your intent to be given a promotion. In some, however, it may not be a requirement. Nevertheless, it is important always to inform the employer in writing that you desire to be promoted to another position. This will show the employer/management that you are serious about the position and are also committed and respect them enough to request them for the promotion in writing. Ensure that you follow the steps given in this guide and download a free template to help you out when you are writing the letter.

Sample Letter of Intent to Hire (from Employer)

Letter of Intent for Nursing School (How to Write: Examples)

Maternity Leave Letter of Intent Examples (How to Write)

Continue Working Letter of Intent Examples (How to Write)