Letters of Reprimand are usually followed by further disciplinary action and, in severe cases, termination. An employee’s performance problem can be well documented by a letter of Reprimand. These letters precisely and directly state the issues and consequences the employee must resolve. However, it is essential to remain professional when writing a letter of Reprimand to inform the employee of his misbehavior and negative traits at the workplace.

Simply it is define as;

A letter of Reprimand is a letter usually issued by management to explain a performance problem that needs improvement.

The purpose of the letter of Reprimand is to ensure that the Reprimand does not blindside the employee. As a logical and expected extension of progressive discipline, it should benefit the employee by helping him/her improve. This letter is typically followed by counseling and coaching by the manager, carefully documented to secure one’s position if there is a lawsuit.

A Letter of Reprimand as a Disciplinary Action

In most cases, sending a letter of Reprimand is considered a disciplinary action documented to help as a reference in the future. However, it may be an action with severe consequences, depending upon the employer’s behavior.

For example, it is common for companies to allow a certain number of written reprimands before punitive actions that could affect an employee’s rank or salary.

When to write and use a letter of reprimand?

A letter of reprimand is a formal letter that the employer should write under particular circumstances according to the company policy and laws. It should not be written emotionally or anxious, as it can later create legal issues. Employees are reprimanded depending on their performance. It is generally the responsibility of the Human Resources Department to monitor an employee’s conduct and then issue a letter of Reprimand to an employee if he is underperforming or engaging in unacceptable behavior.

Addressing the letter to the employee can help protect the employer against future disputes. Therefore, the letter must take the form of an official document indicating the unacceptable conduct of the employee in question. Employee deficiencies can include attendance, behavior, performance, and other issues that require attention.

Process of Writing a Letter of Reprimand

It is essential to take the legal side into account before writing a letter of reprimand. It includes making sure that the reprimand is following workplace policies and local labor laws. If the company has a progressive discipline policy, compare one’s notes from the file review to the company’s disciplinary policy. If you are a sole proprietor, you should consult your lawyer or an expert in labor law who knows about the government policies to get all the legal things covered before issuing the reprimand.

Be objective but humane

The letter should be written by the employer formally and objectively, clearly stating the employee’s conduct or actions that are not acceptable by the company policy, mainly if the employee repeats the behavior regardless of numerous verbal warnings. After the discussion is over, the employees should be asked to follow appropriate procedures.  While a letter of Reprimand has a negative connotation, the letter is still an opportunity to express your intentions elegantly and humanely. Keep in mind that the letter should help the employee personally and professionally, ensuring the continuous and smooth operation of the workforce.

In addition, you need to specify the specific violation or misconduct committed by the employee. Make sure you have proper documentation to support your allegation. Make sure the time and date of the violation are accurate, along with the location.

You can refer to the company policy. Use it to reinforce that the issue is not a matter of personal preference or unreasonable expectation. In addition, reference the company policy to show the employee what required behavior and parameters they must follow to conduct themselves correctly. Explain the progress the employee made following each disciplinary action, including any performance improvement plans he or she completed and any he or she still needs to complete.

Explain how the employee’s non-performance impacts not only them but also the organization’s success. An employer can include a timeline in the form of a due date or an end date when the manager will evaluate the employee’s performance once again.

If an employee fails to show improvement in performance as outlined in the letter of Reprimand, the reprimand letter should outline the consequences they can expect if they fail to do so. Provide the employee with a clear definition of the consequences should they fail to abide by the corrective actions. This act will motivate the employee even more and prove to the client that they understood what they were doing and improved themselves.

The employers should communicate what actions they will take in response to this behavior. It includes scheduling a private meeting with the employee and discussing the behavior or actions you wish to see them improve or implementing an intervention plan to track this employee’s performance and behavior. It clarifies expectations for employees, and it protects your organization against legal repercussions.

Do not sound like an angry parent rebuking the employee as a child. Instead, write down the rectification measures that the employee must follow to ensure that he or she can realize the violation that one had made and how he or she can improve per the standards established by the company.

To avoid any legal problems, you may attach an employee’s attendance records or a performance review when there has been poor performance or productivity as evidence of the claim made against him or her.

Be in place of the employee

Keep the purpose of the letter of Reprimand in mind and write the letter from a perspective that helps achieve the purpose by putting yourself in the employee’s shoes.

We send this letter of Reprimand to you formally because your attendance adversely affects your ability to do your job. While we do not assign specific hours to salaried/exempt employees, a standard workweek will cover 40 hours.

The manager found that between April 10 and April 14, you stopped showing up for the job, not presenting any valid justification for that.

Despite beginning your new job, you have failed to attend work at least one day a week. Your manager informed you that there is no FMLA time off available.

Your failure to perform is adversely affecting the work of your coworkers in the marketing department. They are missing their deadlines because you are failing to perform.

We will not tolerate the negative impact on the workplace due to your absenteeism. Our company will terminate your employment if we fail to see an immediate improvement in your attendance. It means that you must attend work five days a week. If you fail to attend work five days a week, you cannot achieve the goals for which you have been employed.

Your job is expected to be at stake. You will no longer be receiving warnings. However, we firmly believe that you can increase your attendance and performance.

Failures in performance include failing to perform the following:

● There is 33% less customer service per week than the rest of the tech support staff.

● Your problem-solving skills fall lower than the standards of the rest of the staff by 37%.

● Your call duration is 43% longer than what the rest of the staff spends.

We have spoken to you many times and provided you with additional training. However, as you can see, these three essential performance measures aren’t being met. We believe that you have become unwilling to perform. It is negatively affecting the workload of the company’s support staff.

Additional disciplinary actions including termination will occur if all three performance areas do not improve immediately. We have faith that you can improve.

Failure to comply with policies sample

You have violated your expected and entrusted managerial role by discussing employee business with another employee, even though the employee did not specify that the information shared with you is confidential, which goes against rule number 123 of company policy.

Further breaches of confidence in you as a manager will be met with further disciplinary measures, including termination of your employment. I hope that you will learn and avoid discussing sensitive information.

Following are the free letter of reprimand customizable templates available to download. 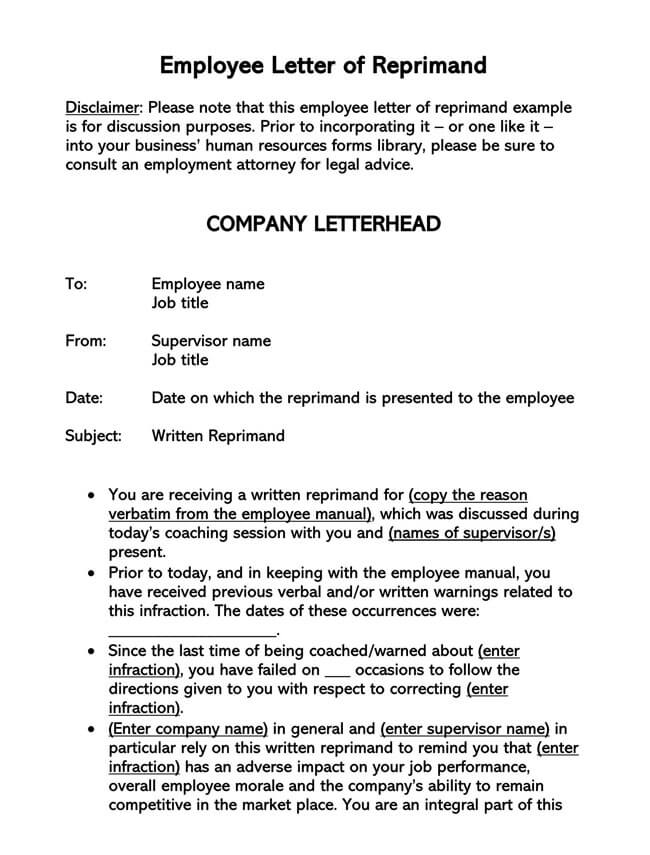 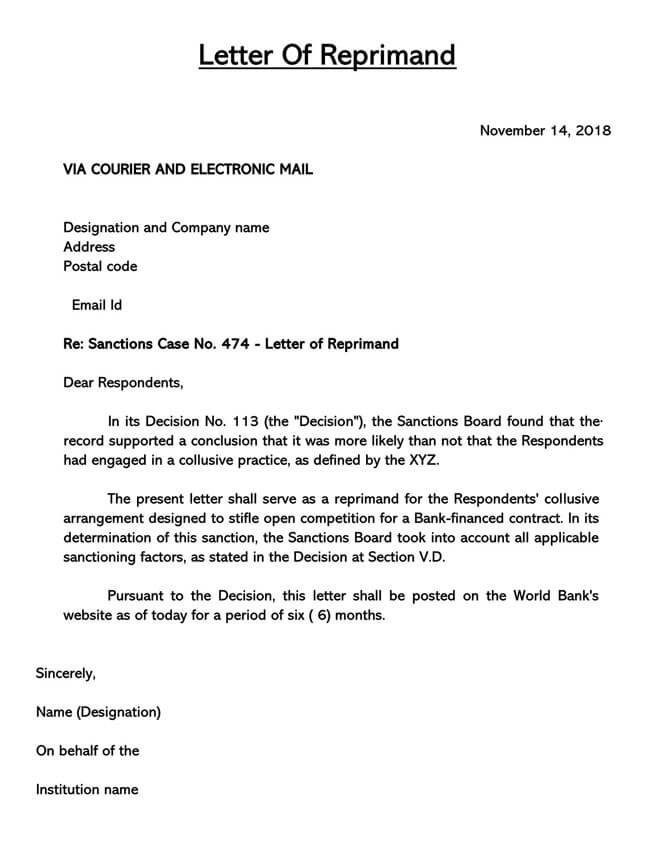 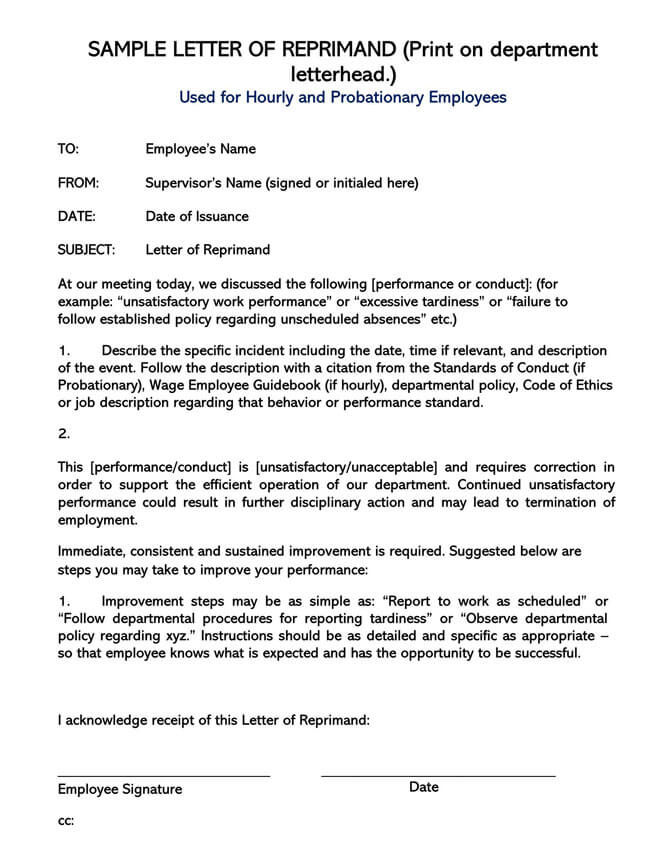 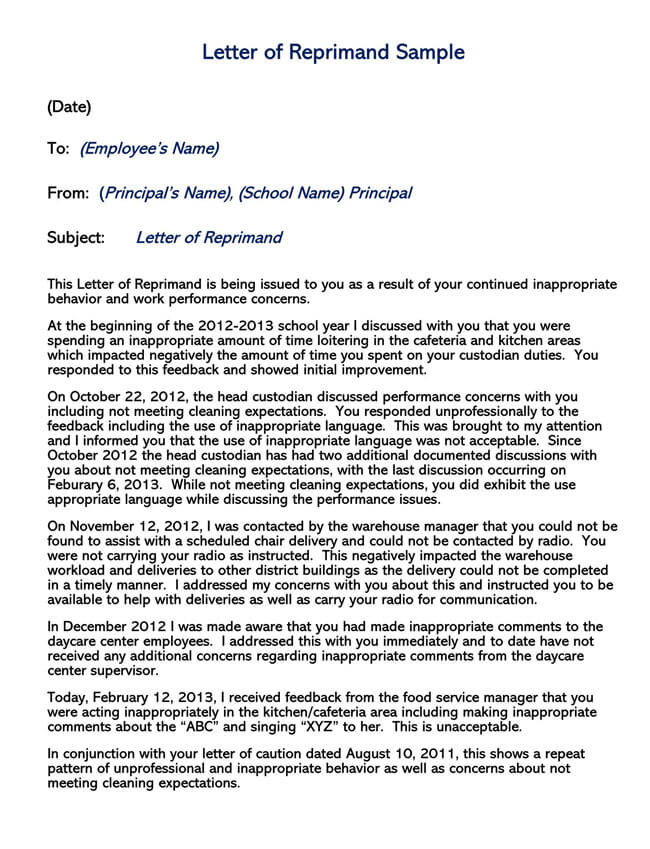 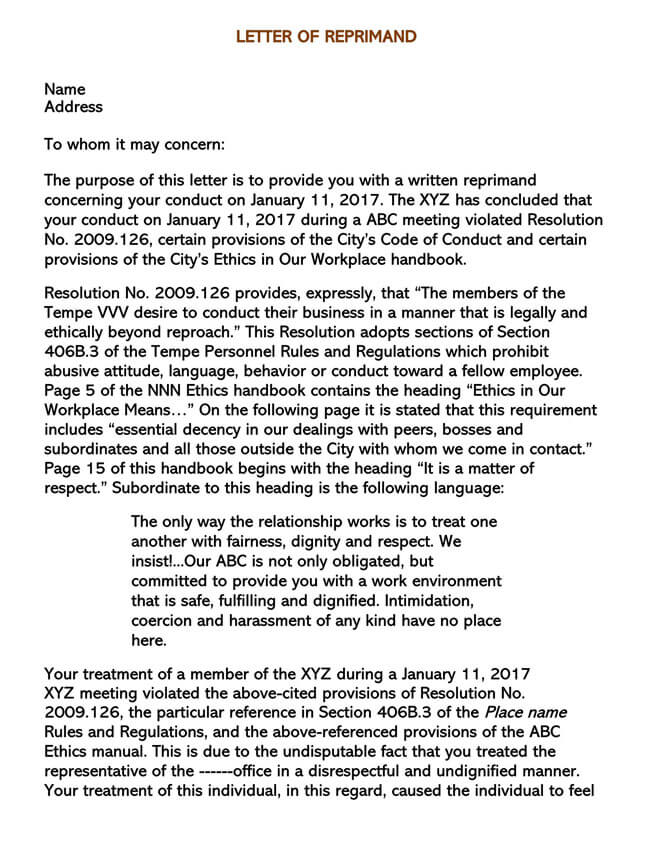 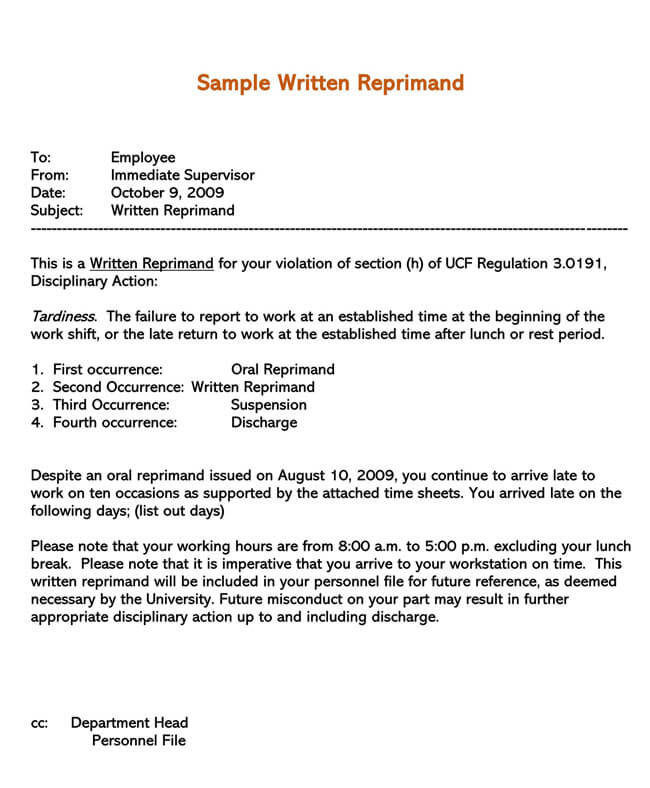 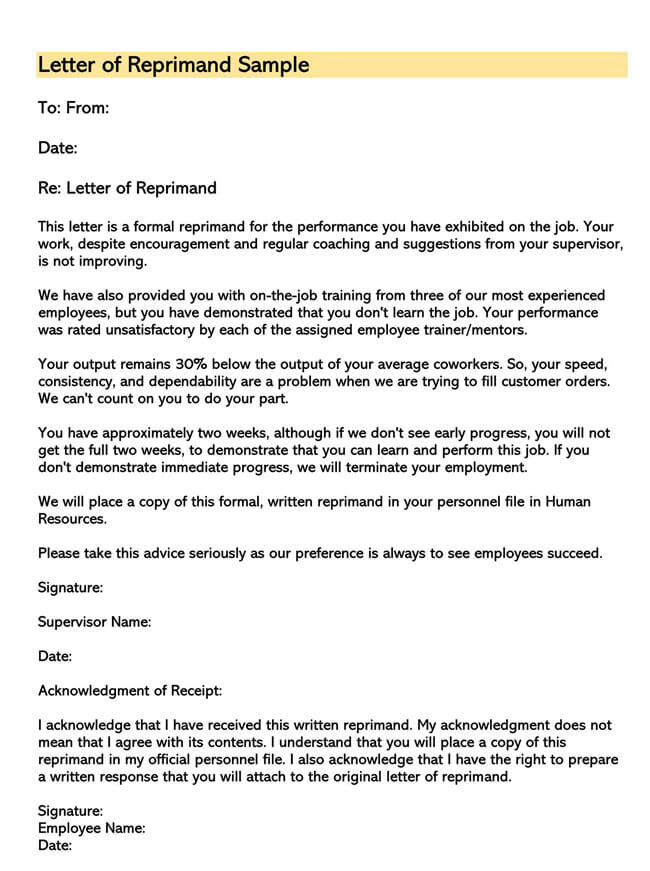 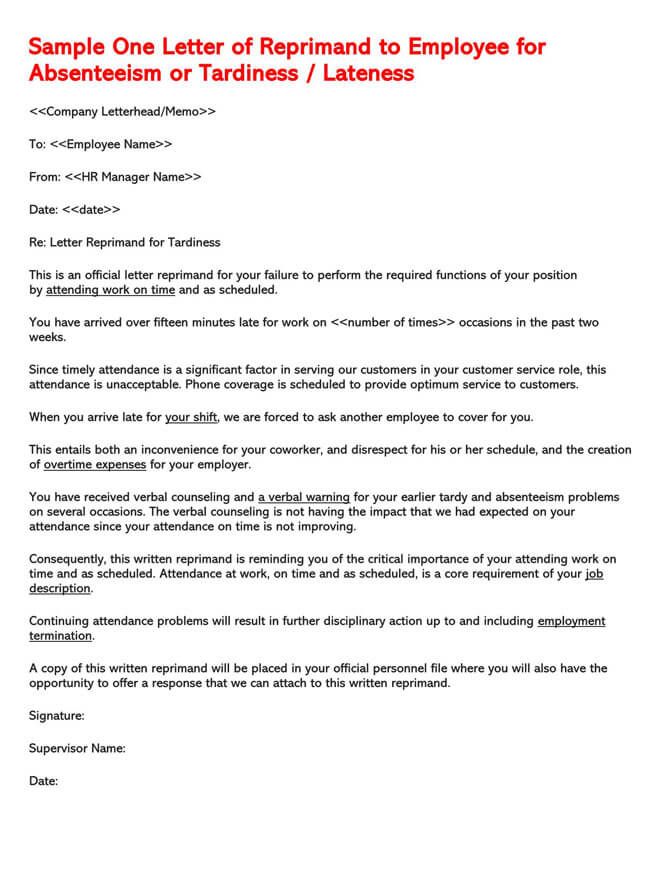 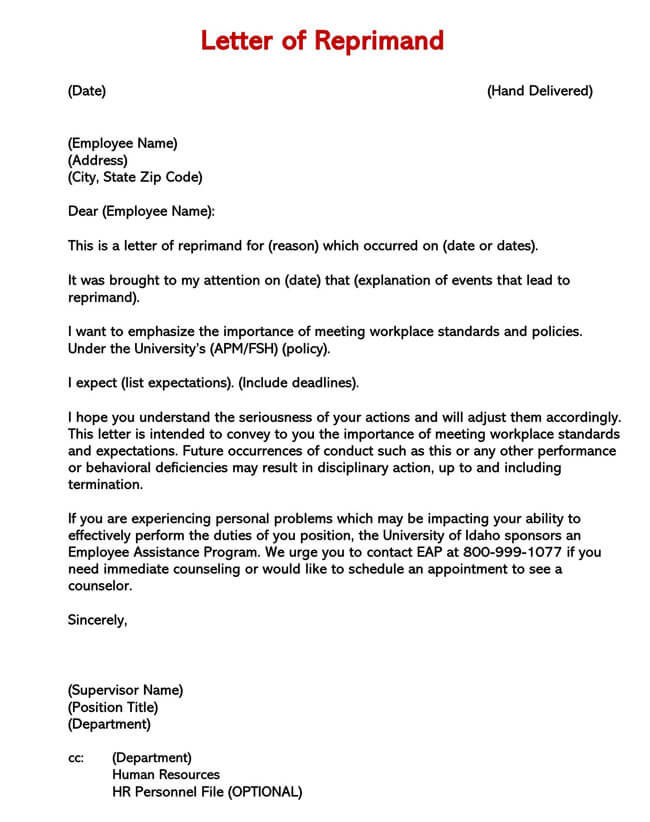 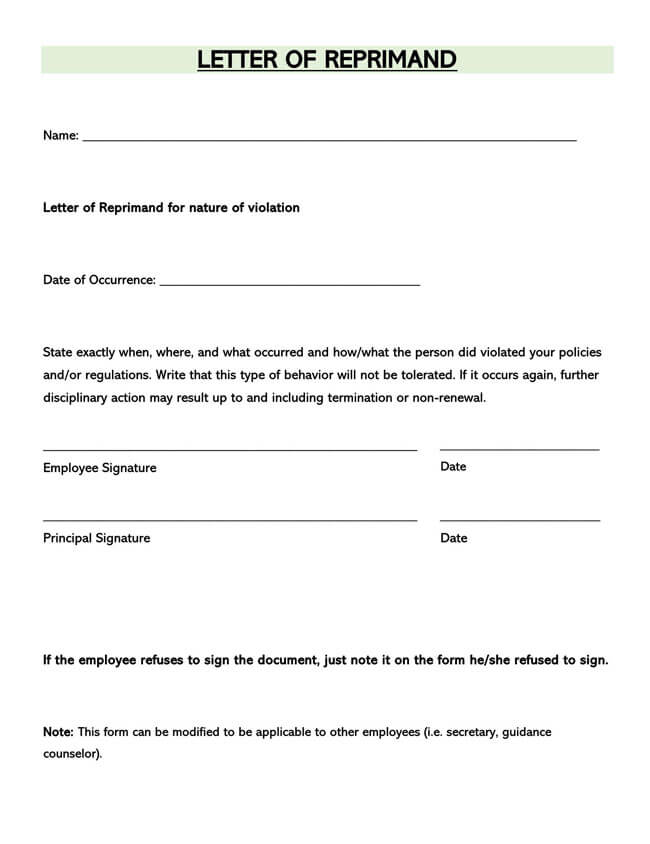 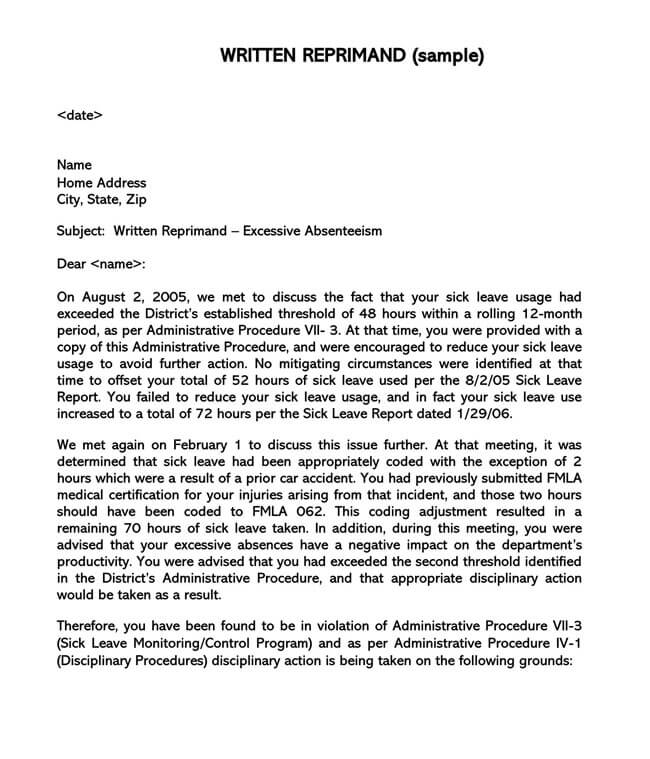 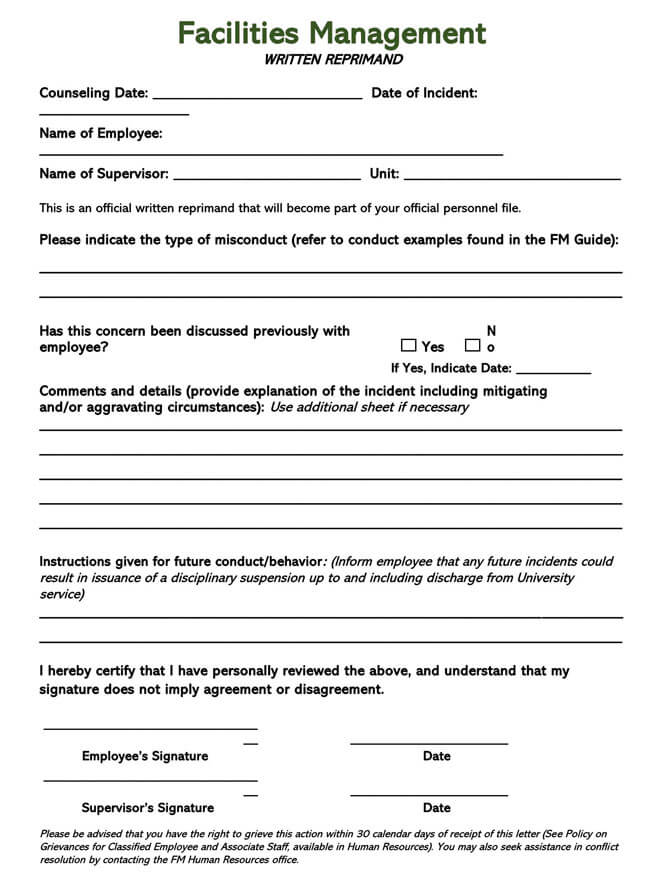 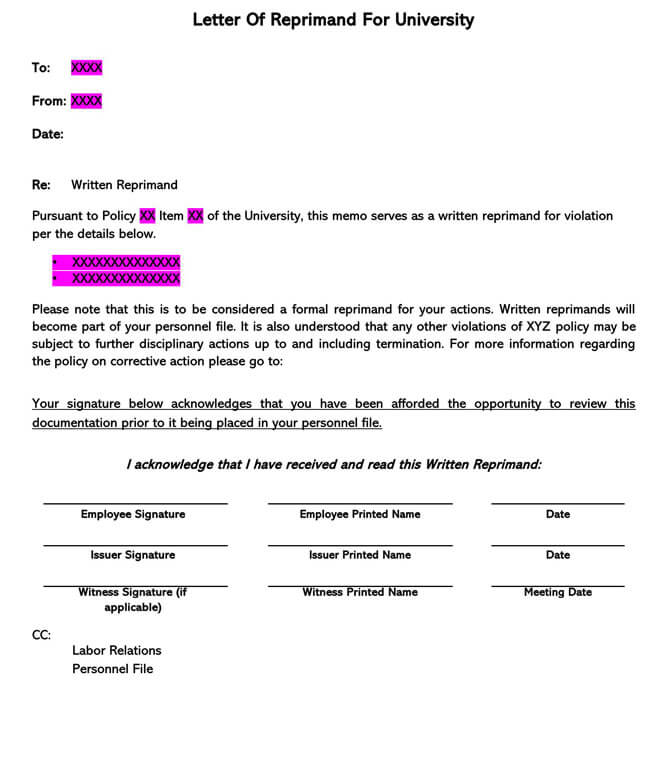 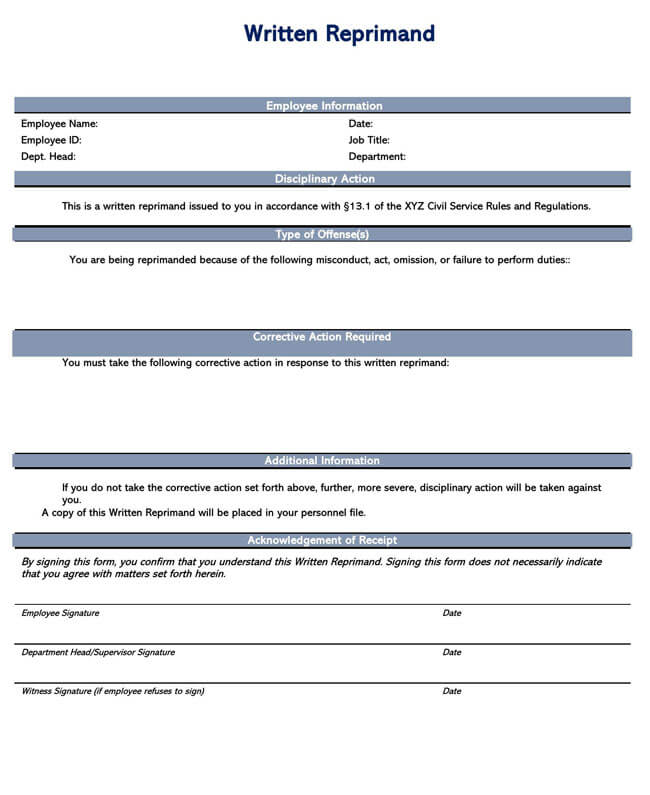 Reasons of Writing a Letter of Reprimand

The ways an employee can violate company policy include attendance, behavior, performance, and other issues requiring attention.

Below are the most common reasons that may result in the issuance of such a letter:

Things to be considered inappropriate

There are some specific things and behaviors that should not be tolerated or considered acceptable in a workplace.  A letter of reprimand can be for insubordination, which involves intentionally refusing to follow directions from management or company officials, unnecessarily arguments, misconduct with coworkers, or underperformance-that involves failure to meet minimum standards of the position and job requirements for a probationary period.

Tips to Consider in Managing Behaviors

A productive and successful workplace depends on good behavior. For organizations to succeed, employees’ behavior must be in line with what the organization needs. Changing behavior at the workplace is not an easy task. There are at least a few “tried and true” methods to get it done. Here are a few tips to keep in mind:

Company policies address both inside and outside the workplace and are usually contained within a business’s employee handbook. They apply to both the employees and employers. Employee motivation and engagement can be vital to driving your company’s success. Favorable company policies can reinforce these factors and help your company thrive – especially if you are just getting started.

The most important thing for the success of a company’s workplace and disciplinary policy is consistent application. Employers who selectively enforce workplace policies are likely to lose employees due to a substantial turnover owing to low morale and general dissatisfaction.

In addition, reprimands need to be consistent concerning their content and actions. Employees are exposed to potential legal liability when they complain about unfair treatment if their employers cannot enforce policies consistently. For large companies, applying a consistent policy is not an easy task, and it’s the HR department that has to overlook it; however, it is much easier to maintain a consistent policy in small companies.

Giving a verbal warning is always advised before issuing a formal letter of reprimand. It is considered standard practice, which involves informing the employees that they might face further consequences if they don’t improve their behavior or performance in the workplace. The consequences can vary depending on the severity of the misconduct and may include demotion or termination. It is also advised to document the verbal warning for later references in the demotion or termination letter, and it may also be helpful in a lawsuit.

If the employee is still misconducting after the verbal warning and the written Reprimand or cannot increase his performance, it’s okay to terminate the employee. However, he should be given enough time after sending the letter, and only after that should his employment be terminated.

What is the difference between a written warning and a written Reprimand?

A written reprimand is often used after previous written, or verbal warnings do not result in the desired results. With the written Reprimand, the issue is placed in the employee’s personnel file and kept for a predetermined amount of time.

How long does a letter of Reprimand stay on file?

How long a letter of Reprimand stays on the file depends on the company policy; however, in most cases, it’s between 6 months and a year.

How to Write a Job Promotion Letter (Samples & Examples)

How to Write a Polite Job Rejection Letter [Free Templates]

How to Write a Job Proposal Letter (with Examples)