A Promissory Note Release Form is a legally binding way of proving when a debt has been paid off, whether between two private individuals or involving a business. Just as its name suggests, this form “releases” the promissory note, or loan, which essentially makes it a receipt for the borrower. This document can be used in any situation that requires proof of a loan being paid in full, including interest, and that both parties agreed that all the terms were satisfied. A promissory note release form offers peace of mind and legal protection for the borrower. Once the lender has signed this document, the borrower is freed of all responsibility associated with the loan.

Promissory note release is a document that should include just a few key elements:

It is not mandatory to sign the release note in the presence of any witness or notary. Like any other legal document, signed copies should be sent to both the lender and the borrower.

What Does a Standard Promissory Note Release Form Include?

In order for the promissory note release form to be useful, it should be clear and specific about the loan that was paid off in full. This includes important information like the amount of the original loan, the date it was issued, the date when it was paid off, any interest that may have been accrued, and the total amount that was paid. The promissory note release must also specify the name of the lender and the name of the borrower. The note has to be structured in a way that it can serve as obvious proof that this particular loan is completely paid.

When Does a “Promissory Note Release” can be helpful?

The main benefit of a promissory note release is to give the borrower some evidence they can keep for their records. In the event of a clerical error or a misunderstanding, it will be crucial to have this trusted form of proof that satisfactory payment was actually made. Think of a promissory note release as a form of insurance for the borrower that they will no longer be responsible for the loan.

For instance, if you are lending or borrowing money, you should create a promissory note that addresses the payment details, collaterals, late fees, and the interest rates. There are various types of promissory notes that can be used for different purposes, including;

Simply put, you should use a promissory note for more straightforward loans that have standard/basic repayment structures and a loan agreement for more complex loans.

What is the Legal Value of Promissory Note Release?

A promissory note release is legally binding, as long as it’s signed and structured with all the necessary information related to that specific loan. This means it would be accepted in civil court, with a credit bureau, or in any other situation where legal documentation of a loan would be necessary.

While using a notary is not required in order to have a legally-binding promissory note release form, it’s always a good idea to use this resource. An official notary will witness the signing of the document, attach their official seal, and ensure that the promissory note release form is trustworthy. Getting this added protection is helpful to the borrower because it means the document signing actually has a witness and therefore its validity cannot be easily challenged.

This letter is written in consideration of all payments being made for the loan of $335 that was made on January 12th, 2018. The borrower, John Landis, has paid the lender, Michael Fox, $350 as of August 24th of 2018. This includes the original loan as well as $15 of interest. All the terms of the loan were met satisfactorily. Michael Fox releases John Landis of any obligations to the loan. 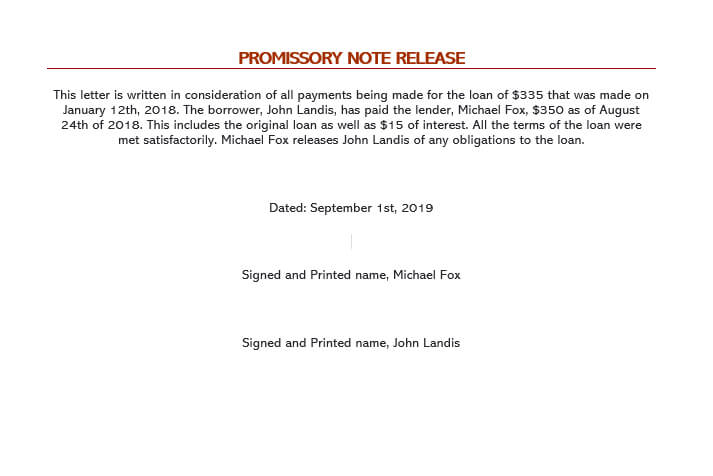 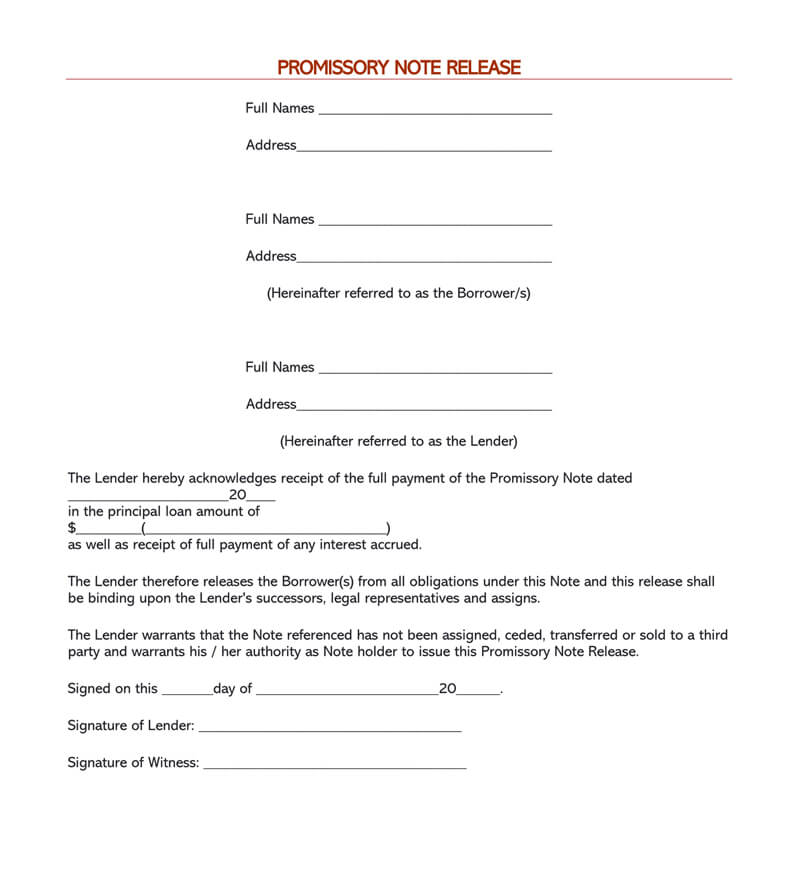 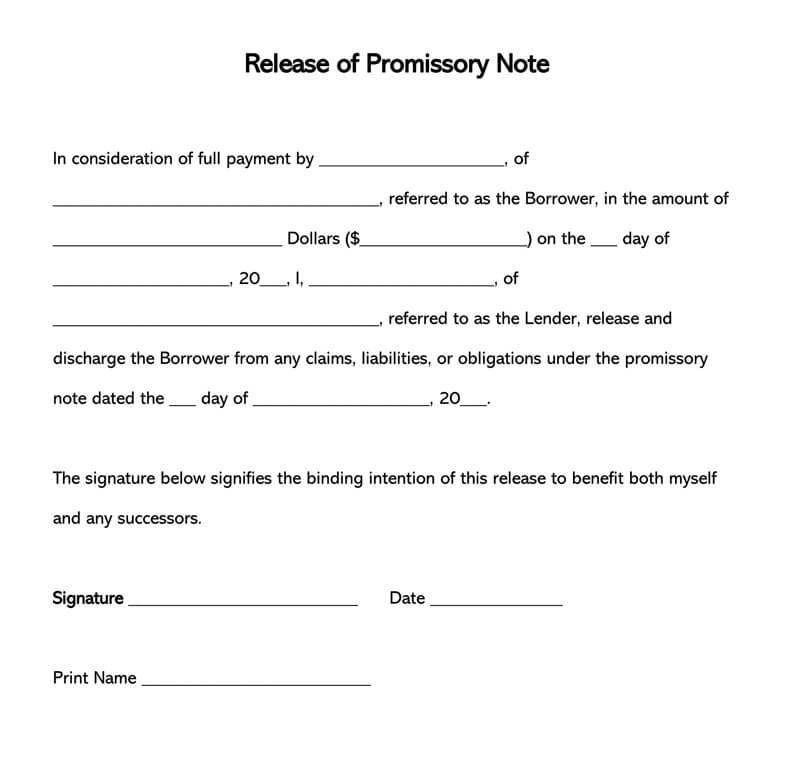 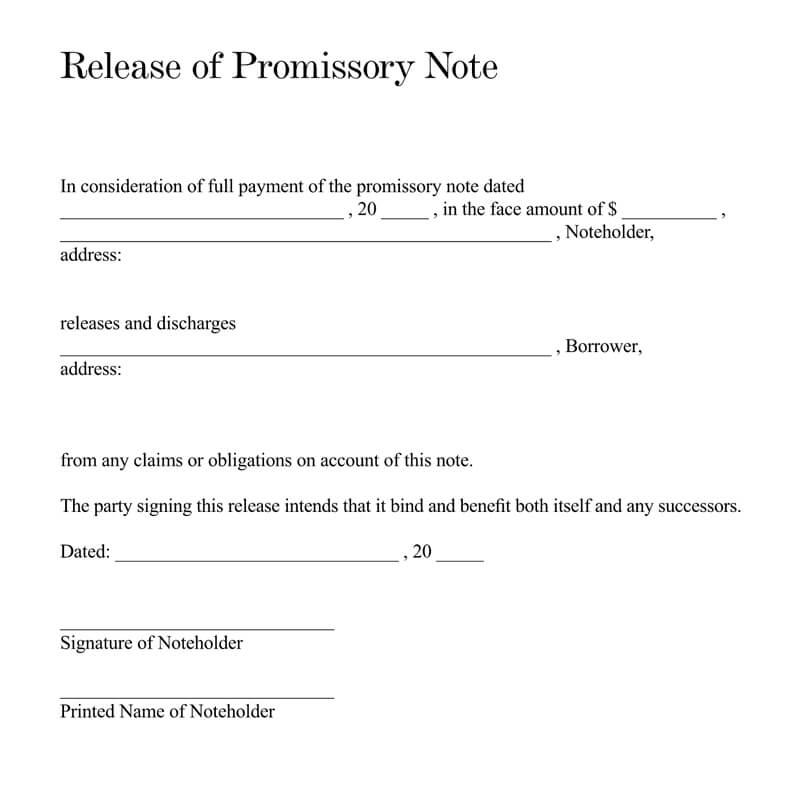 What information should be include about the lender?

Make sure to include the lender’s full name and address as part of the contact information to be included in the document. The lender is the company/individual lending the sum of money to the borrower.

What information should be included in the borrower?