Authorization Letter of Collection (How to Write) Free Templates

An authorization letter of collection is often used when you want to give someone the permission or authority to collect something on your behalf. A lot of example situations in which this letter might be needed are to collect medicines from a store, to collect a laptop or mobile from a repair shop, to collect a shipment or parcel from a Courier office, and such similar scenarios. Writing this letter avoids many problems when someone unrelated goes to collect stuff for you. There are certain things to be followed while writing this letter to achieve maximum effect.

How Does it Work?

It is based on mutual trust between the three entities involved. The authorizer believes both in the collecting person and the organization, which is giving the object. And it is true the other way round also. The intermediate guy should be a familiar person to at least the authorizer, and it is more preferable if that person is known by both the authorizer and the client to whom the letter is written.

Contents of an Authorization Letter of Collection

To whom the letter is written for:

The top of the letter should address the organization which takes actions or decisions or which delivers the object of concern. It can also be like “To Whomsoever It may concern”.

Inform who you are and other details like the address and phone number.

About the Authorized or the one who is being substituted:

In this part, mention who is the authorized person who is going to collect the item for you. Fill out clearly about who he/she is, their address, and phone number so that the concerned organization can use it in case of any mishap. It’s also good to mention the number of an ID card for reference.

What is being collected:

Provide a detailed explanation of what’s the object which you want to be collected by the other person. You can also write the details of why you are authorizing this person.

Please consider this as the only notice unless any changes are informed. You can also check his [Name-A] ‘s signature at the bottom for validation purposes. Thanks in advance for cooperating in this manner. In case of any doubts, please feel free to call me on my number mentioned above.

Note: This sample letter can be used to authorize anyone to collect or claim cheque, documents from the post office, mark sheet from college, passport, certificate, or anything. Just change the subject accordingly. 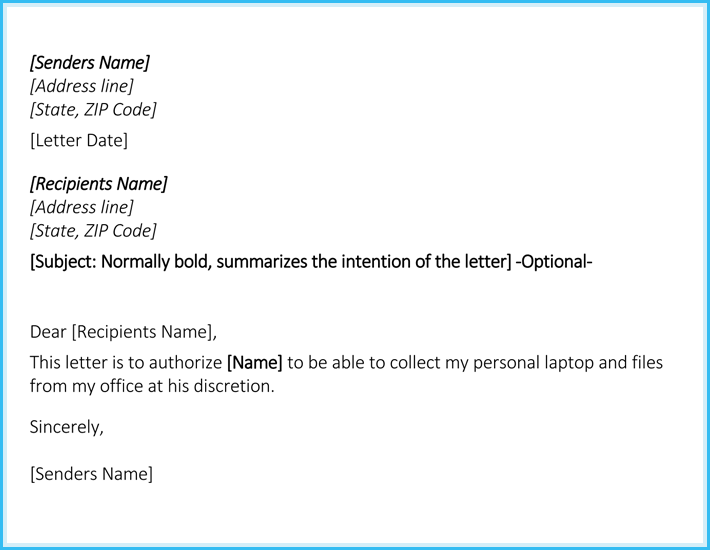 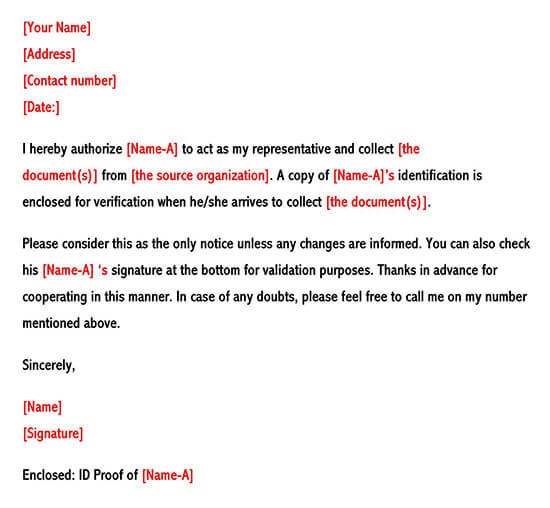 Precautions when Authorizing Someone to Collect Something on your Behalf

when permitting another individual to collect money on your behalf, you should consider the following precautions;

What is an authorization letter?

An authorization letter is a letter given to the recipient as evidence that the person is legally responsible for acting on behalf of someone else.

How can an individual collect certificates on someone else’s behalf?

Suppose a person is not available at the time of collecting his/her important documents due to any unavoidable circumstances; in that case, he/she can authorize a trusted person to collect the certificate on their behalf. He/she only needs to write an authorization letter stating the reason and validity of the letter.

What are the contents of an authorization letter?

An authorization letter should include the date, the name of the recipient of the letter, details of the person who has been authorized, for example; Name and identity proof, the reason for his/her unavailability, duration of the authorized letter, and action to be done by another person.