The power of attorney authorization letter is a legal document that gives another person the power to act and make decisions on behalf of someone else in accordance with the terms of the document. Usually, the party being granted this authority is referred to as the ‘agent’. Some of the activities an agent can undertake to include monetary transactions, property dealings, and even signing cheques. When the agent acts in the place of the original person, his activities are binding legally to the original person.

What is an Authorization Letter?

An authorization letter is a written endorsement that gives another person the right, authority, mandate, or capacity to act on your behalf to enter into a contract, spend a certain amount, take action, delegate his or her responsibilities, and do other matters you want them to look into. A letter of authorization is necessary for instances where the writer of the formal letter is unable to represent themselves for some given valid reasons.

These two letters are very similar, but the main difference comes in the scope. A letter of authority authorizes someone to act on someone’s behalf for a given specific purpose. The assignee of the letter of authority should cancel the letter upon completion of the tasks assigned. On the other hand, the power of attorney authorization letter gives the assignee powers to act over a wide range of transactions.

Reasons to Designate a Power of Attorney

There are quite a several reasons to designate a power of attorney, and among the reasons are the following:

While the principal grants a power of attorney over their dealings to an agent, they can still be held accountable for their dealings. They can revoke the power of any attorney at any specific time. If the owner of the property dies, the money, shares, and property are transferable to the benefactors of the will.

And on the other hand, if they become incapacitated, the joint owner is left with very limited authority over the property’s share unless they are entitled to a power of attorney.

Types of Power of Attorney

It is used to grant another person the authority to make important decisions and take actions on your behalf. It is more encompassing compared to the non-durable power of attorney.

The decisions that the authorized person may resolve include financial, business, and real estate affairs. A durable power of attorney doesn’t cease upon the death of the principal and does not expire after a given set of time. It actually becomes effective immediately upon the incapacitation of the principal.

Special/limited power of attorney is usually used on a limited basis, such as for one- time banking or financial transactions to sell a given property. In most cases, a limited power of attorney is used when the principal is incapacitated or is unable to complete the transactions due to his/her prior commitments or illness and wishes to appoint a trusted individual to act on his or her behalf. The agent only has the authority to act on behalf of the principal over what is assigned to them and no other matters, as this is the only scope and limitation of the stipulation.

These events include; the incapacitation of the principal, when the principal is out of the country, or when the principal is unable to act upon it. Therefore, this power of attorney will only take effect (spring out) upon the occurrence of certain events that must be specified in the professional letter. This should be detailed to avoid confusion and misunderstanding between the parties involved.

A medical power of attorney bestows authority to the agent to take definite control over the health care decisions of the primary whenever they are unable or are incapacitated to do so.

Contents of Power of Attorney Letter

The main contents include:

I, (principal name) (principal’s address) being of sound mind, hereby appoints (agents name) (agents address) as my one true attorney, in fact, to act in name, place, and stead to perform the following:

The following buildings interests or rights shall be subject to the agreement :

a). XYZ building
b). XYZ tower

The Power of Attorney will be on effect on this date of (Date) and will be terminated on the date (Date).

My agent will be compensated for his services as follows:

The Power of Attorney will be guided by the laws of the land of [Name]. In Witness whereof, I have signed this on my own free will.

Agreed to and signed by

Subscribed and signed to in front of me on this day of (Date). 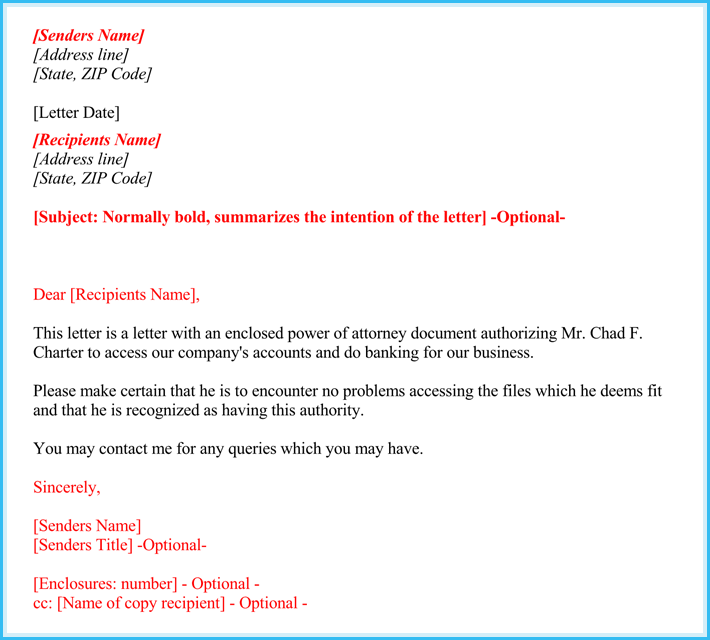 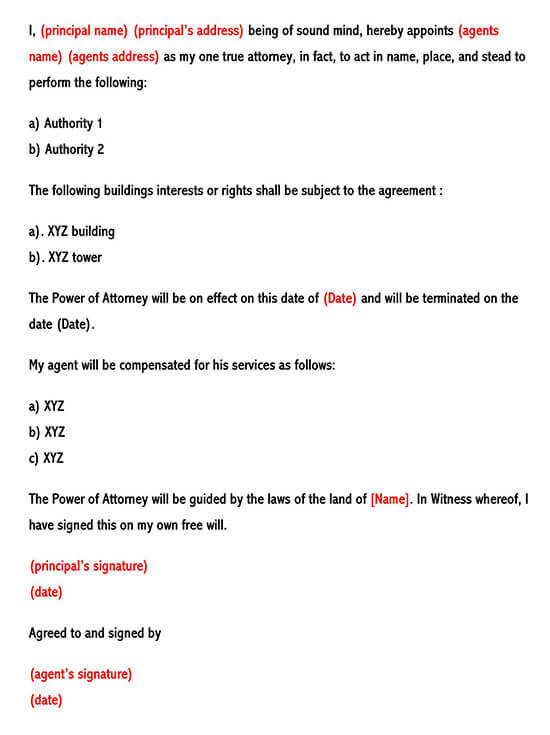 Sample Format of a Power of Attorney Authorization Letter

A power of attorney authorization letter is essential whenever you need someone to act on your behalf to complete tasks that you are unable to do due to certain valid reasons.

A power of attorney is necessary when bank accounts, properties, and brokerage accounts have two or more names, and when the principal is incapacitated or is unable to act due to valid reasons. There are five primary forms of power of attorney, and you can choose any depending on your current needs. Lastly, feel free to refer to the samples of the power of attorney authorization letter provided in this article whenever you need to create one.