This is a receipt that is given to the buyer by the escrow agent after receiving the earnest money. Usually, a buyer pays a certain amount of money to the seller or escrow agent once he/she shows interest in a particular property. This money is mostly paid once a verbal agreement has been reached on the offer that has been made. The earnest money deposit also referred to as a good-faith, binder, or token money deposit.

The customer can pay 1 % of the property valuation as a token. Both the buyer and the seller are under a commitment to carry forward the verbal understanding after the token money has been deposited.  In case the seller attempts to avoid the agreement, the buyer has the right to sue for a specific performance that may legally result in a sale plus damages.

The primary purpose of earnest money is to ensure that the buyer does not take for granted about following this contract. Earnest money covers the seller whenever the buyer backs out. About 1% – 3% of the purchase price is held by the third-party until the deal is done. If the process goes smoothly, the earnest money is either put in an application to the buyer’s closing costs or return back to the buyer after receiving the full costs. Unfortunately, if the deal fails, the earnest money will be returned to either of the party by the third party with respect to the terms & conditions of the original agreement.  Making use of an Escrow minimizes the likelihood of the buyer putting offers for a number of homes, then vanishing when the seller removes the houses off the market.

Basic Contents of this Receipt

Below are the main basic contents of this receipt.

Date:  This is the first thing that appears under this receipt. Under this section, you write down the calendar date when the first Earnest money was acquired by the third- party, which is the money holder.

Name of the Escrow and Agent: You will be required to write the full names of the Escrow or the agent who is acting as a representative since he/she is the one who has received the earnest money and will give the receipt.

Money Deposited: Under this section, you are required to document the amount of money that has been deposited in the earnest money account, which will be issuing a receipt. You will write this amount in words and thereafter in figures. The currency should be in Dollars.

Property Address: You will be required to indicate the physical address of the property, which is under the transaction. Exhaust all the addresses available, including building number, city, state, and the street where this house is located and many more.

Buyer’s Name: The buyer’s name needs to be noted down. Write his/her full name, followed by an email address.

Seller’s Name: The seller’s details need to be indicated. Confirm from the original buying agreement and note down his/her full name, followed by the email address.

Receipt Signature: This is the final part of this document. The agent or third-party has the mandate to sign this document once it has been completed. After this, he/she then prints the name. 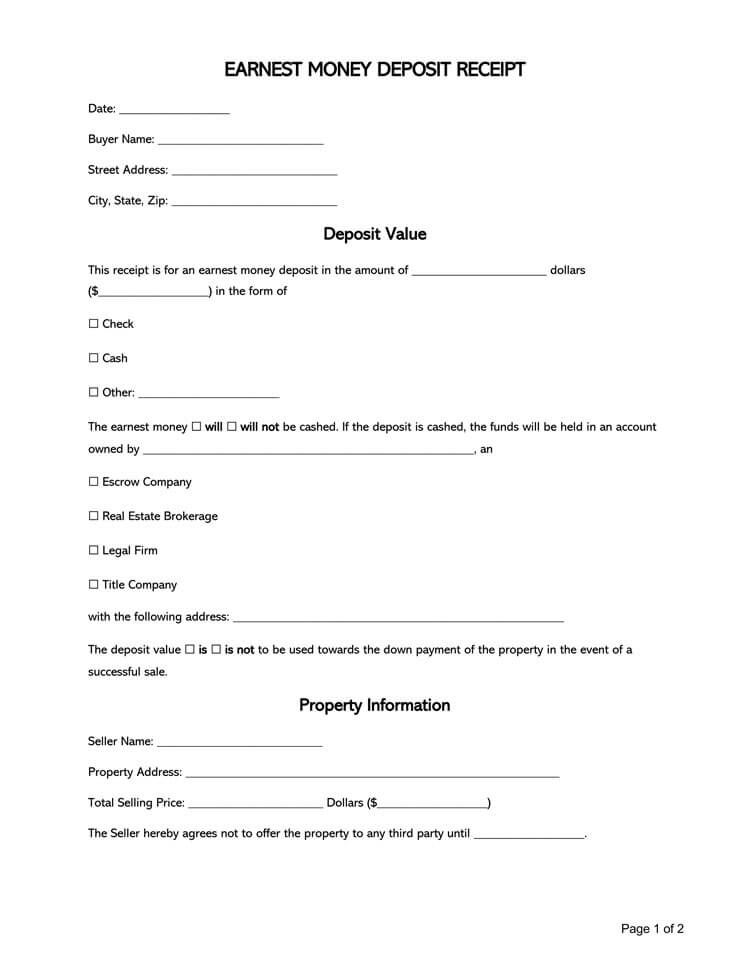 Consequences of Not having this Receipt

It is always advised to get a payment receipt of your deposit funds. It will serve as proof if in case a misunderstanding arises. It will serve as proof that you have deposited the money, and the agent has received the money against the said property. It will bind the seller not to terminate the agreement unless the breach of the contract by the buyer. However, there is a catch. The seller can only terminate the contract if the contract notice reaches the title company before the buyer deposits the money with the company.

Free Business Receipt Templates | How to Use and Keep Record

Free Business Receipt Templates | How to Use and Keep Record