An IOU (I Owe You) is a written and informal agreement that acts as a promise to the lender by the borrower to pay back the money owed. An IOU Template is a preformatted document that facilitates you in the process of an IOU agreement by providing the ease of empty

Because the IOU is an informal contract, it’s used among individuals who trust each other. This is why the IOU is usually weak from a legal standpoint, as it can’t effectively oblige the defaulting party to clear the debt. Usually, for a legal contract to be enforceable by law, three things need to be valid,

IOUs or IOU templates are simplistic, so they don’t include sections that detail interest and repayment (The consideration). This is what makes enforcing IOUs by a court of law a massive challenge if the debt repayment issue finds its way to court. Despite this shortcoming, IOUs are still helpful if you want to write down something on paper quickly and are much better than not signing anything at all.

The IOU, a legally binding contract between the borrower and lender, is referred to by other names.

Both promissory notes and IOU forms have a lot in common as they’re both written financial agreements which involve debt. In addition, they’re very similar as they’re both a promise by one party to repay the given sum of money by or on a specific date.

The distinguishing difference between these two financial agreements is that promissory notes are more formal and complete, unlike IOU forms.

Other than stating the date when the debt should be repaid, promissory notes also include other repayment details such as;

Both the borrower and lender should sign a promissory note, plus it’s in most cases notarized and witnessed. Therefore, you must make sure to include the phrase “promissory note.”

Promissory note agreements are subject to the statute of limitations set by the local state on the issuer of promissory notes. The limitations usually range between 3 to 15 years, and it starts counting from the first day the agreement is violated. Nonetheless, other courts had declared that every missed payment within the note has its specific statute of limitation that starts on the exact date when the particular payment was rendered delayed.

What An IOU Template Is

An I Owe You (IOU) template is a written one-page contract where one party acknowledges a debt to another individual. The IOU template contract is usually used among persons who know and trust each other such as friends, family members, or business partners. It acts as a promise to pay back the loaned money without needing paperwork. Often, the IOU template is used to be a placeholder before writing an official loan agreement.

How an IOU Works

The IOU is created as a show of intent, and this doesn’t have to necessarily be planned but usually casually, such as when meeting for lunch with a friend. Once the IOU is drafted, a more formal written contract or agreement follows afterward.

You shouldn’t be overly concerned when drafting the IOU, as you’re required to use specific terminologies or formats.

In fact, the only important details you need to add include;

However, the IOU doesn’t include other details, including;

The informal nature of the IOUs causes a lot of confusion on whether this agreement can stand in a court of law. This uncertainty on whether IOUs are legally binding happens because it’s hard to determine whether these contracts are legally enforceable. Because of this, it becomes harder to demand IOU payments than other more formal agreements involving debt, such as a bond indenture or a promissory note.

This uncertainty surrounding IOU makes it invalid negotiable instruments. Therefore,  IOU cannot be transferred, assigned, traded on the open market, or sold to another person. Fortunately, this issue has somewhat been addressed by the downloadable legal templates for IOUs that give you an outline of every detail you should add to your IOU form. In addition, these downloadable legal templates are a lot simpler to enforce and be acknowledged by a court of law.

An example of an IOU form

Richard Hughes has ordered the delivery of furniture for his office. However, he doesn’t have the money needed to pay for the whole order. Therefore, he pays a down payment and gives an IOU pledging to pay the remaining balance for the furniture purchase in 30 days regardless of whether interest is or isn’t charged. This request might be acceptable and thus go through if Richard Hughes has an existing relationship with the seller.

The bookkeeper can also record unpaid debt as an IOU. This means that the IOU in this scenario is an account receivable item, and as it appears on the balance sheet as an asset. With that said, the time frame is what determines how the IOU should be recorded.

Here are the different scenarios;

Who needs an IOU?

Having an IOU enables both parties to record how much money has been borrowed and mention the date by when the money should be paid back. It’s crucial to state the exact amount of money borrowed regardless of whether you’re a friend, family member, or colleague, a reliable source for future reference as memories usually fade over time.

Some of the most common scenarios when you need an IOU include;

An IOU is required by any person borrowing or lending money for personal or business purposes. The IOU should always be written to protect yourself from unwanted concerns later in the future. It’s necessary that the borrowers and lenders be persons. IOUs can also be issued by the government experiencing a debt crisis, such as Greece, to settle its unsettled debts. These are also referred to as registered warrants, and governments can use these documents to conserve money for unpaid debts.

With Legal Templates, you get a free IOU template that can be used in day-to-day scenarios where you want written record money was loaned or borrowed.

How to Write an IOU in a Template

When writing the IOU in an IOU template, here are the steps you should follow:

Step 1 – debtor, creditor, and the amount

The first step when writing the IOU is stating the name of the lender or creditor, the borrower or debtor, and how much money has been loaned out, both in numeric and written format.

I, the signatory James Hughes (Name of Debtor), hereby ratify and acknowledge to John Clarkson (Name of Creditor), hereafter referred to as the Creditor, that I owe the said Creditor an amount of Seven Hundred Dollars ($700.00) dollars as of the date stated below. This amount includes all the legally allowed charges, for example, accrued interest up to the date mentioned below.

This second step entails outlining details on how this loan will be settled. For example, the debtor in our illustration will clear off this loan by paying monthly installments. But when the loan is being cleared without any monthly installments but in one lump sum payment, you should simply enter an amount of “$0” and not $50 as in the example below. Finally, finalize this last step by entering the final date when the loan should be repaid and when the IOU was signed.

Following are some free downloadable IOU templates for you: 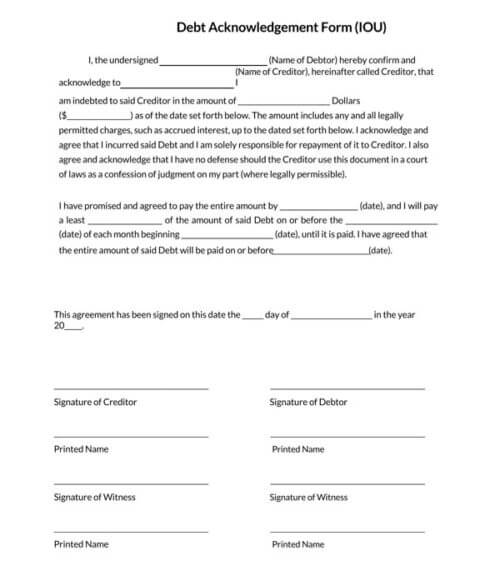 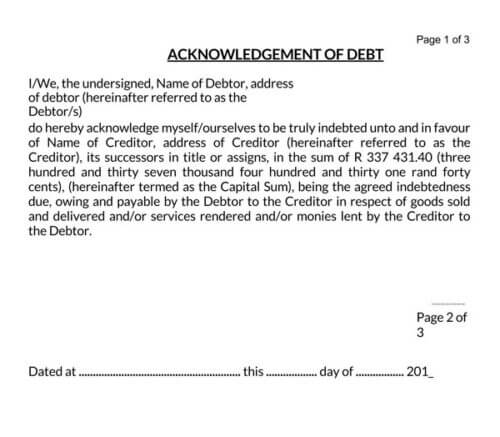 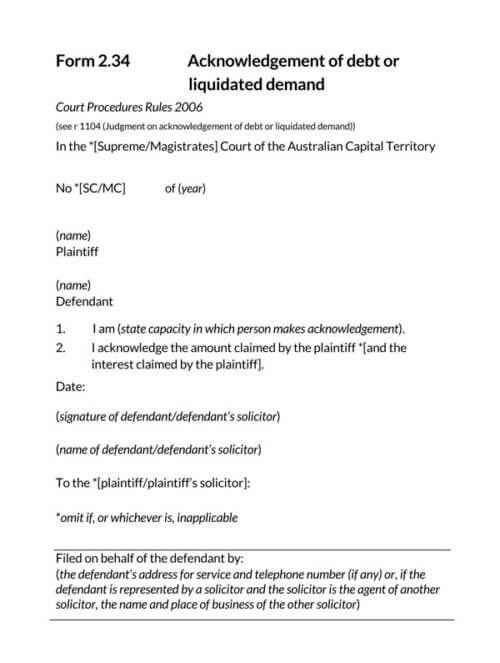 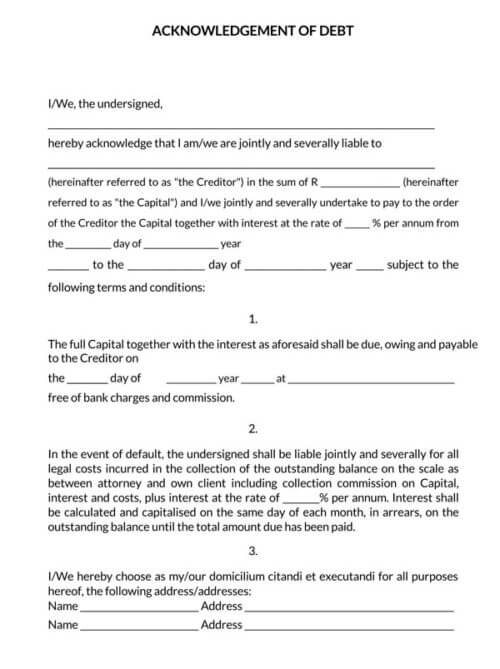 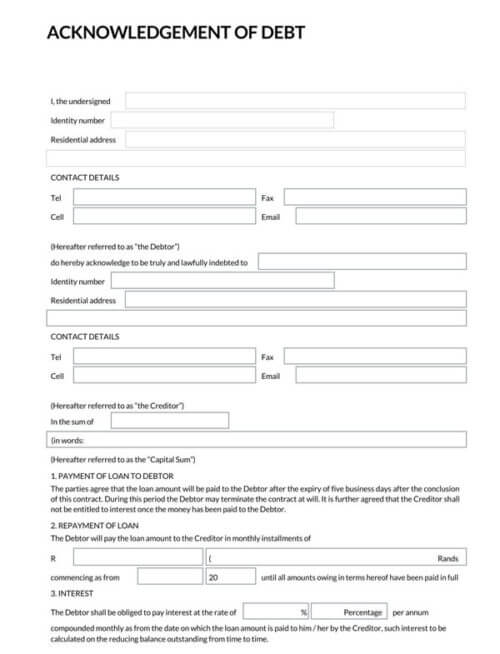 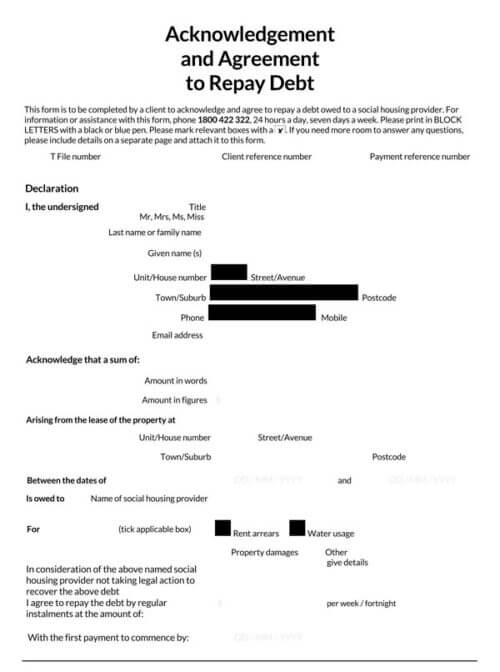 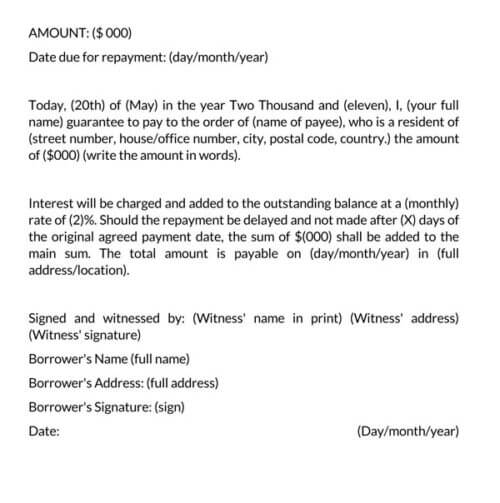 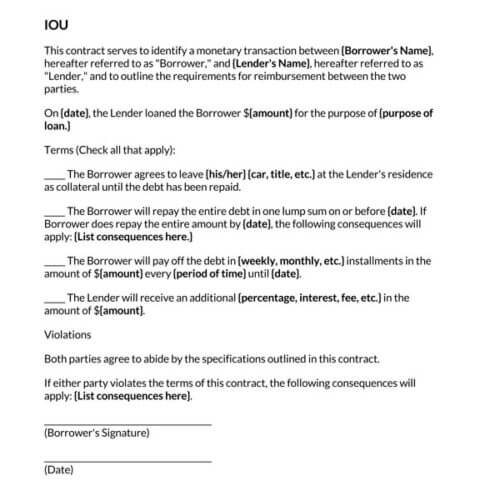 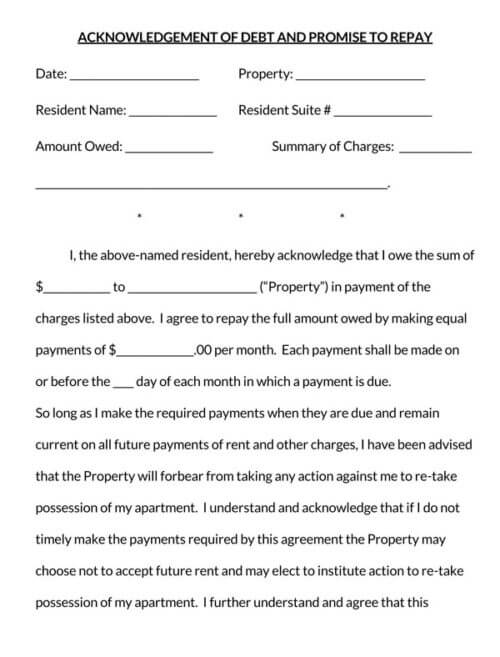 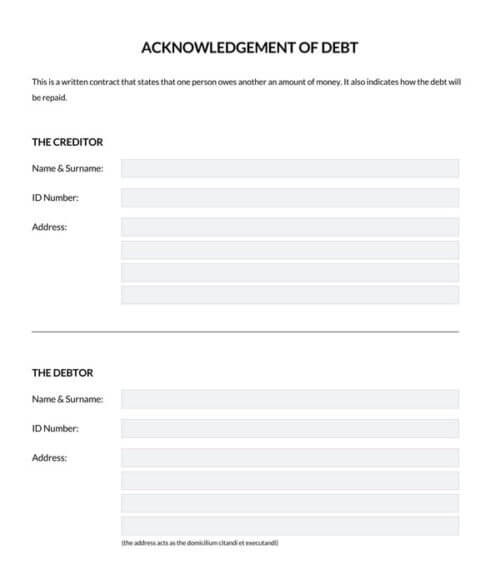 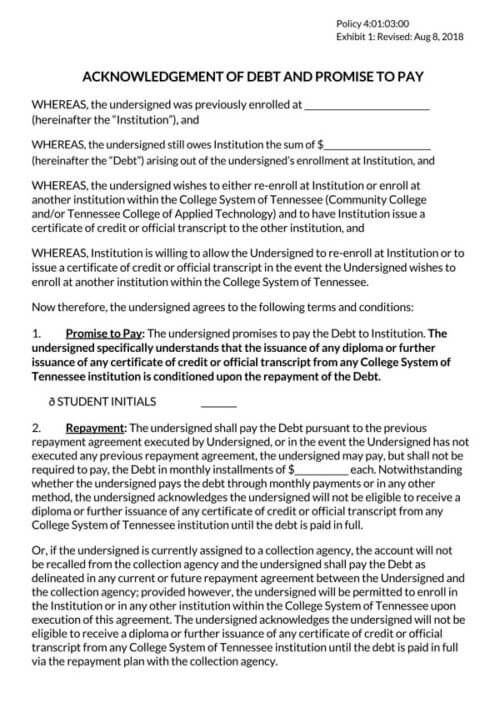 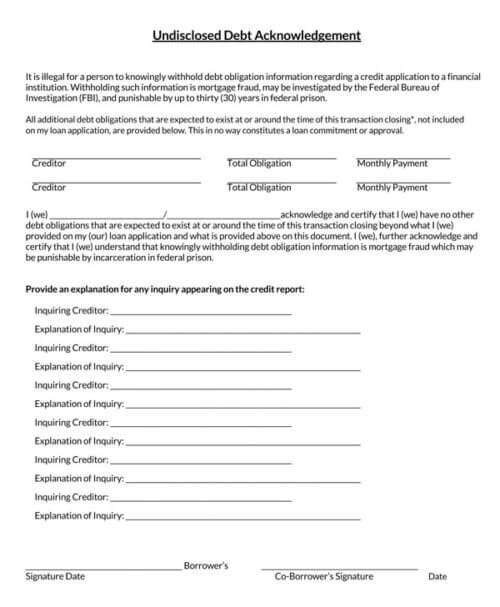 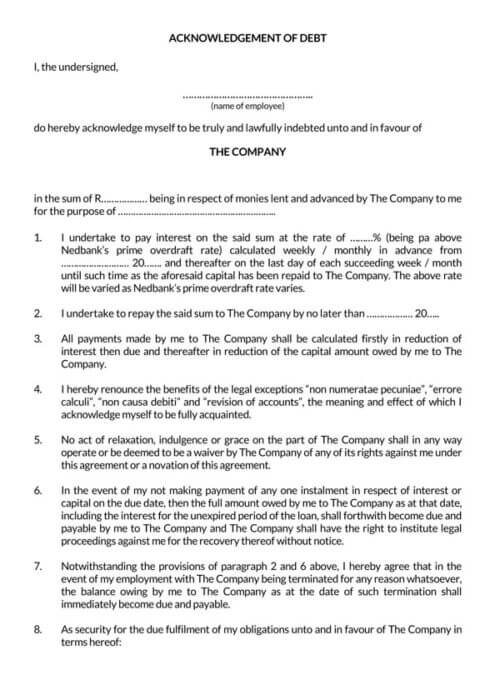 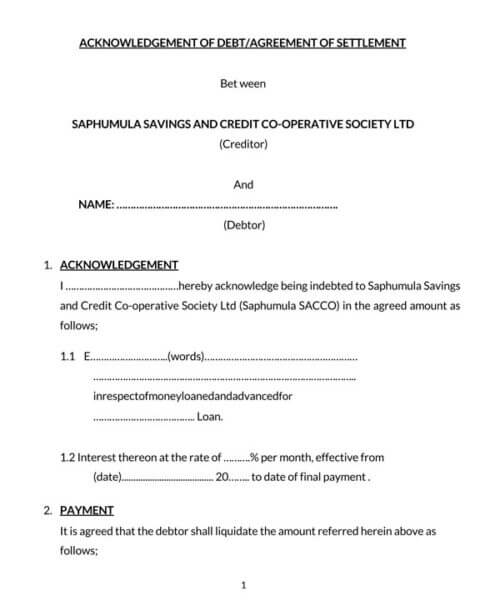 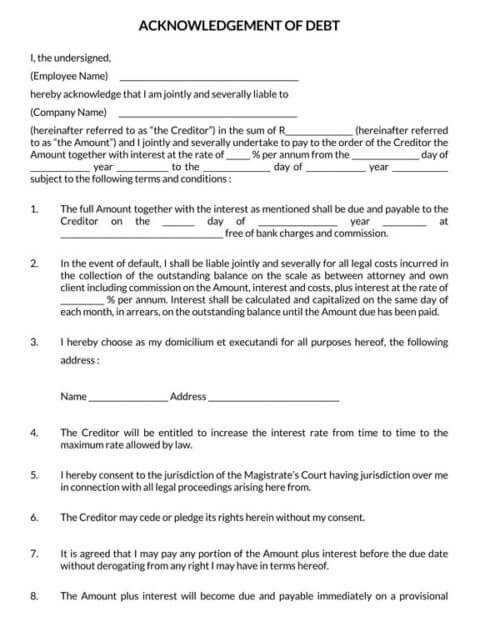 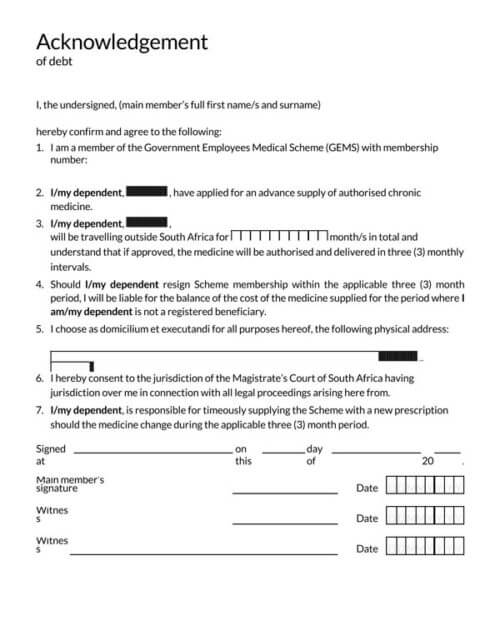 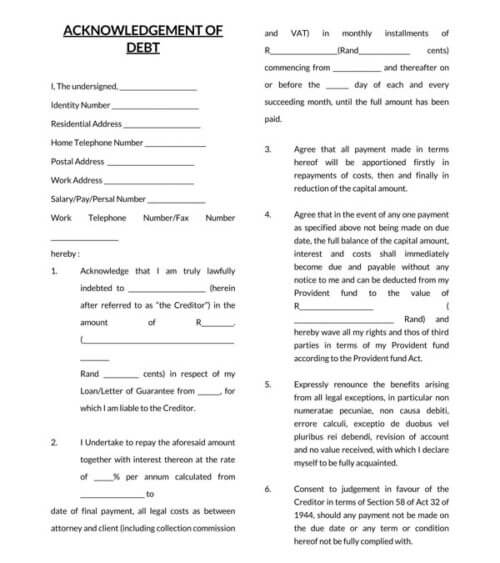 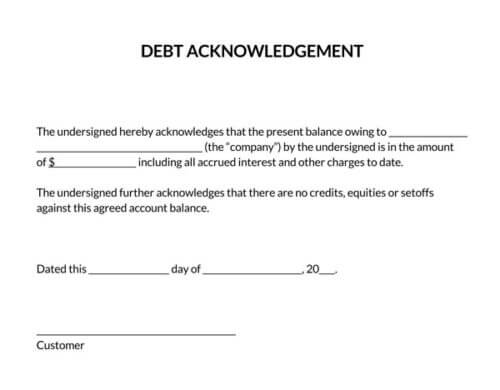 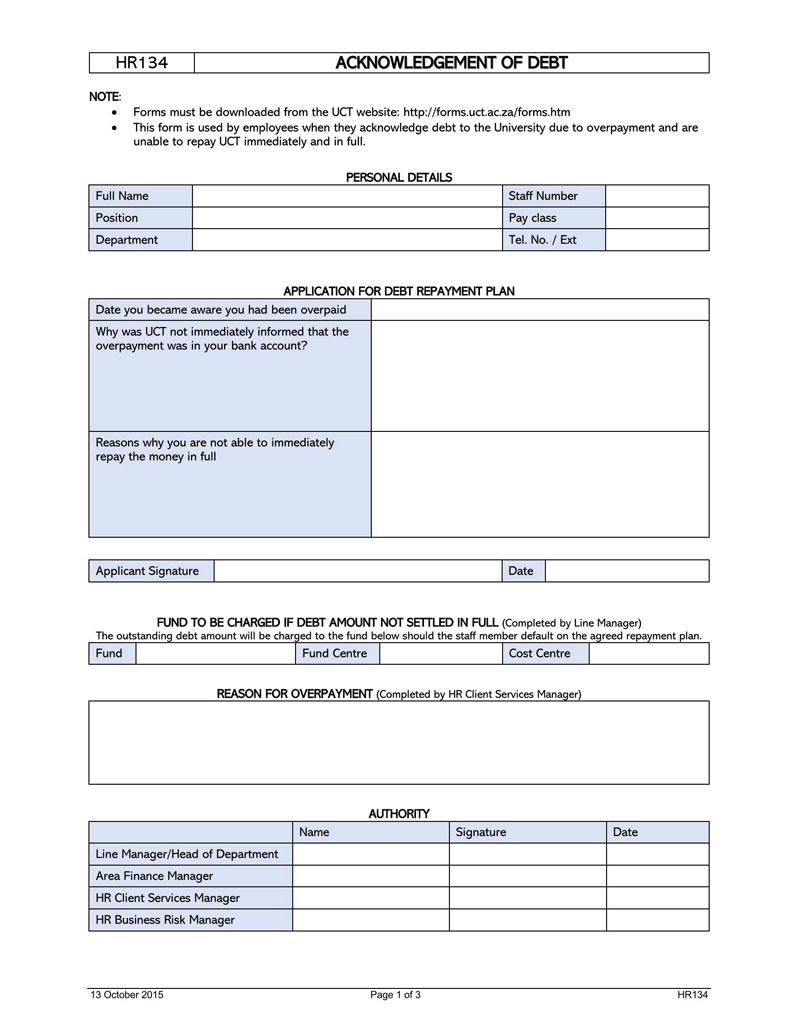 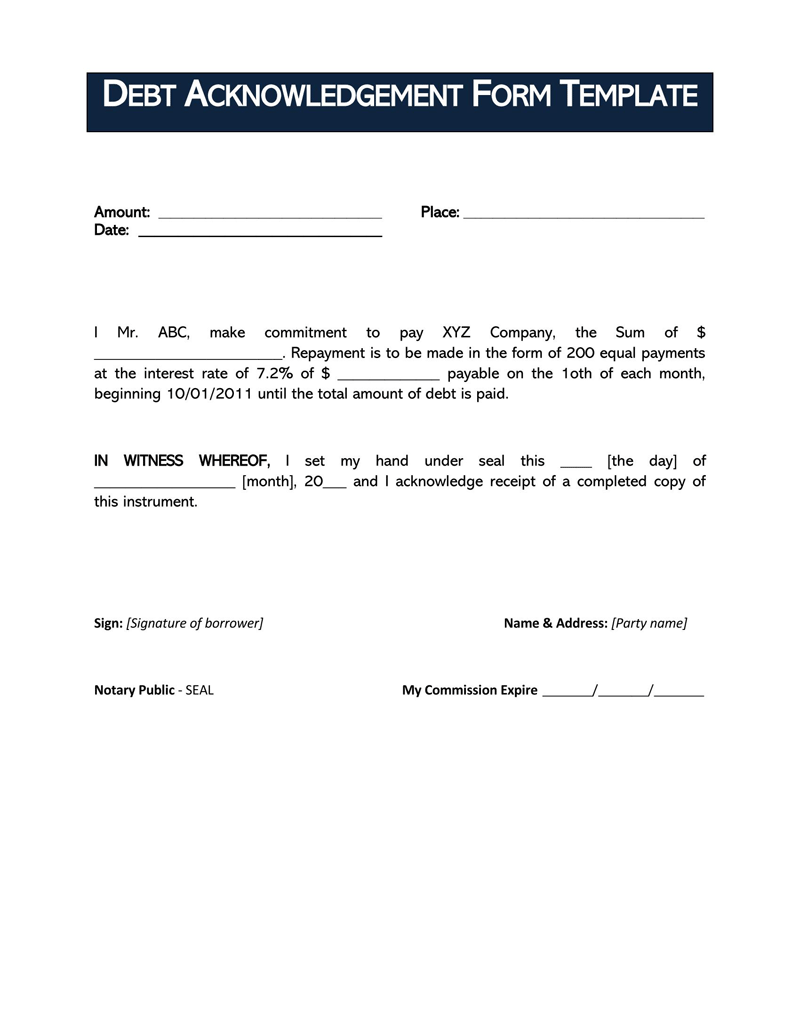 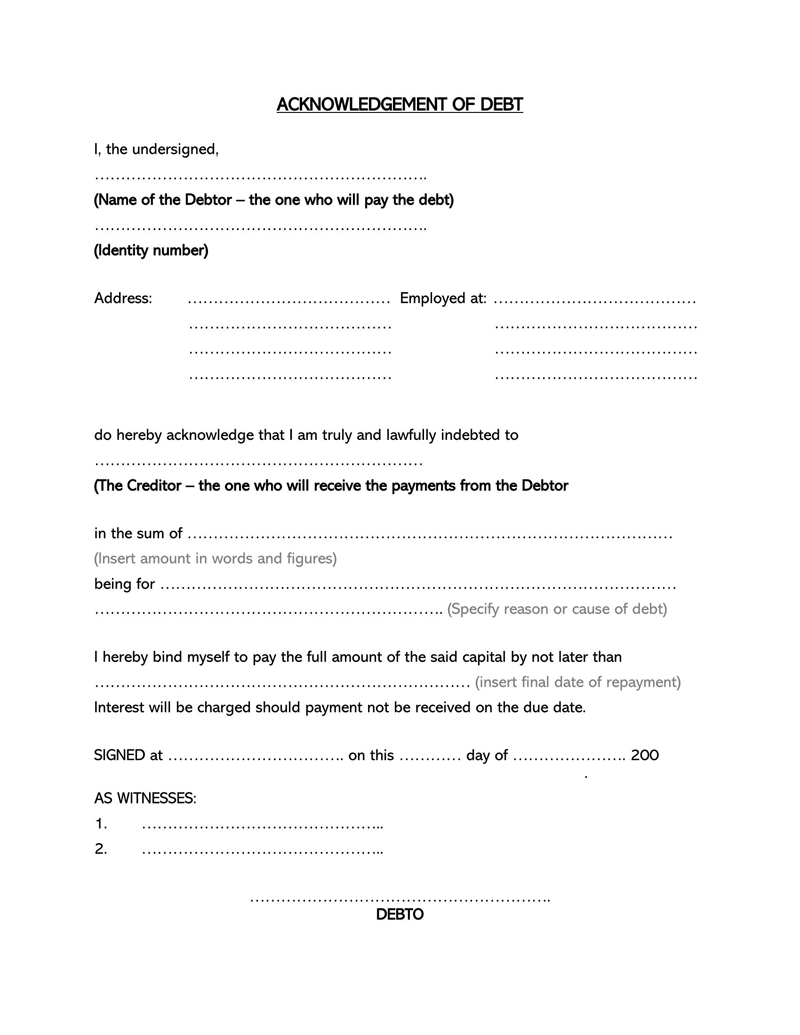 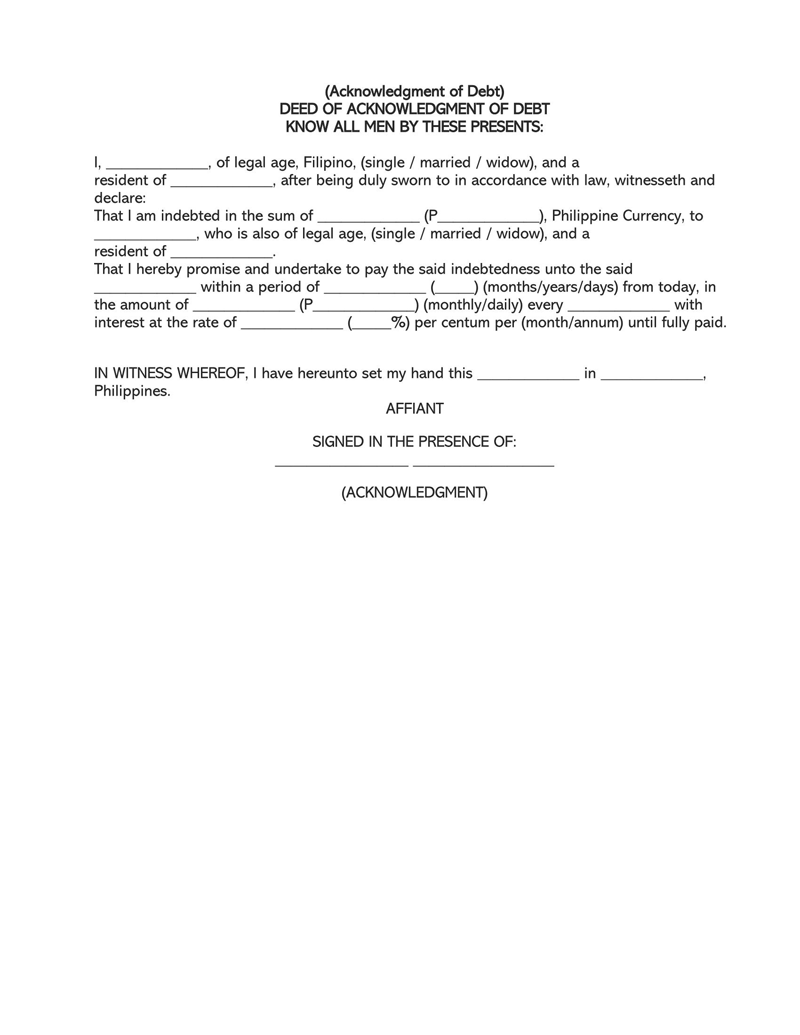 When Do You Need an IOU?

There are several scenarios when you need an IOU and this include;
• When you don’t have enough money to pay for goods or services, you issue an IOU to clear the remaining amount.
• Borrowing money as a down payment for an occasion such as a wedding or party
• You’re doing business with someone with who you’ve worked within the past hence ready to take an IOU.

Does an IOU Need to Be Notarized?

You don’t need to notarize an IOU. Nonetheless, certain legal parties believe that attaching their seal to the IOU increases its enforceability since it becomes more official. Notarizing an IOU validates the agreement as it shows a third party witnessed all this. Because of this, the lender is more likely to win the case over the borrower if the issue of not repaying the owed amount ever ends up in court. Notarizing the IOU will become a lot more official and binding document, almost identical to a promissory note.

Is an IOU a Legal Document?

The IOU is considered as a legal document that you can present in a court of law. With that said, whether the IOU is binding or not is open for argument. This is because some authorities view the IOU as binding, but its enforceability is up for debate. In contrast, others see the IOU isn’t binding at all and is instead an acknowledgment of existing debt.
If you wish to increase the enforceability of an IOU, then it needs to be a lot more comprehensive. Because the IOU isn’t as detailed, it becomes a lot more challenging for it to be enforced by a court of law as it becomes hard to identify the rights and obligations of the IOU parties or who they’re.

What Is an IOU in Finance?

The IOU is a written contract that’s essentially viewed as an informal acknowledgment of an existing debt between two parties, a lender and a borrower. The borrower usually signs this document despite not being specific on an interest charge or payment schedule stating the debt repayment date. An IOU can be transferred or sold from one party to another and gives a lender a slight legal resource in the event the borrower doesn’t honor their promise.

What happens if I do not use an IOU?

The primary purpose of the IOU is to state the amount of money borrowed and by when the repayment should be made, and with interest if applicable. If you don’t have this document either as a lender or borrower, it’s likely to be frustrating when one party doesn’t keep their promise to repay or give you the money. Therefore, it’s best to have the IOU if you’re a lender or a borrower.

The IOU is an essential document when borrowing or lending money. And with such immense significance, it’s best to know how it’s written. This guide has outline every helpful information you should know if you’re considering using an IOU.