Before accessing certain privileges, you will usually have to prove that you stay where exactly you claim to be staying. That demands that you showcase a letter to that effect. The letter in question is the landlord’s proof of residency letter. It is a letter that contains information about where you stay at that time.

The letter is, for a large part, drafted by your landlord and then presented by you to the relevant authorities. In our discussions that follow, we are going to examine this letter in its finest details. Of importance, we are going to showcase how to draft and subsequently make good use of it.

Purpose of the Landlord Proof of Residency Letter

The landlord proof of residency letter serves two main purposes. We highlight and explain them here below:

For one, the letter proves your residence. It basically shows whoever is concerned that you indeed reside where you claim to be. This is important as it forms the basis on which to further apply for and gain access to a variety of privileges and state benefits.

Useful for Claims and Litigations

This letter is also useful insofar as gaining access to the claims is concerned. To qualify for some state benefits, for instance, you will naturally have to prove that you indeed stay wherever you claim to. Then again, the letter is also used for litigation if and when needed in the halls of justice.

How to Write a Landlord Proof of Residency Letter

Following the steps below will help you to write this letter:

It all begins by downloading the relevant form that is used by landlords to verify the residences of the tenants. These forms contain the templates against which you fill the necessary details that are intended to demonstrate that you truly reside where you claim to be.

This form is available in multiple formats, so it is up to you to choose the most suitable one for you. Examples of these are the Open Document Text (.odt), Microsoft Word (.docx), and Adobe PDF.

Step II: Fill in the Details

After downloading and printing the template form, get down to the serious business of filling it. To do this, you have to take the following steps:

Lastly, a notary acknowledgment is also necessary to be able to make the letter gain the trust and the official character it badly deserves. Take the letter to an official and have it notarized. As part of notarizing the letter, the signatures and the name of the affected official have to be incorporated there.

Here, we leave you with a format of drafting this letter:

Further to the above, I swear under oath and attest to the fact that the facts I have stated forth in this declaration are true and correct.

I/We, act as witnesses to the aforementioned assertions by ______ and indeed vouch for their residence status.

I, Catherine Blaise, the landlord of Sylvester O’Hare, formally acknowledge that he indeed resides at 25 Dorrance Street, Providence, RI 02903. He has been living there since January 25th, 2019, in the capacity of my tenant.

Further to the above, I swear under oath and attest to the fact that the facts I have stated forth in this declaration are true and correct.

I/We, act as witnesses to the aforementioned assertions by Catherine Blaise and indeed vouch for their residence status. 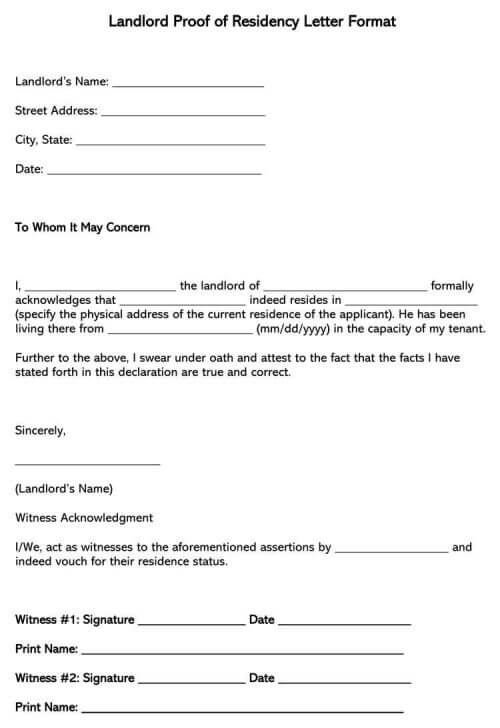 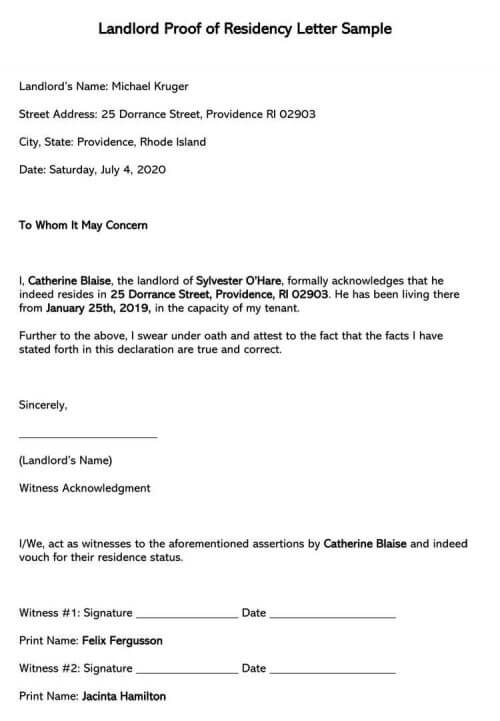 Things to Look For

There are three main things you will find mandatory and useful when attempting to draft a letter. In this segment, we break these things down and discuss them for you to consider and note:

You have to uphold a higher degree of transparency when drafting a letter of this kind. See to it that you only furnish information that is factually correct and verifiable. This is to avoid a situation in which you may land in hot soup thereafter when implementing the provisions of the letter.

Apart from being transparent, the letter has also to be accurate. In this regard, it has to showcase only the necessary and proper details. Do not fall into the temptation of exaggerating the facts to try and twist the contents in such a way as to make you appear better than you really are.

Given the highly demanding nature of a letter of this kind, you have to see to it that you act strictly within the necessary timelines. Do not extend the timelines or delay in handing in the letter. That may disparage your chances of getting the necessary outcomes.

We spare this segment of our discussions to ask and answer some of the questions that are frequently asked regarding this topic:

Can A Letter Be Proof Of Residency?

YES, but under stringent circumstances. For a letter to be admissible in this case, it has to be drafted by someone who is well-known to you and must be subsequently notarized to give it the official character.

Is A Passport Proof Of Residency?

Indirectly, YES! A passport is proof of citizenship. Then again, it contains the physical address of the holder. Joining the two dots, it goes that a passport is also able to serve as a proof of residency, not unless it lacks the information about the residence of the bearer.

Can A Pay Stub Be Used As Proof Of Address?

A pay stub, just like the passport, also contains the physical address of the bearer. Thus, it can also serve as a proof of residence, remotely, though.

We bring an end to our look into the proof of residency letter from the landlord there. As you may see, the significance of this letter is too huge to be taken lightly or for granted. Thus, you want to make sure and take every precaution to draft it well.

If in doubt, we ask you to approach a trained expert or seasoned lawyer to help you out in this. This is a letter whose careless drafting can inflict untold repercussions. So, when do you plan to set out at drafting one for yourself? Let us hear from you in the comments sections hereunder…

How to Ask for an Employment Verification Letter (Examples)