Medicine is a highly coveted field of study. As a result, getting into medical school is typically a competitive process. One of the requirements of the application process is submitting recommendation letters. However, the recommender must know the applicant well enough to give a thorough recommendation.

A medical school letter of recommendation can be defined as a formal letter sent to endorse a medical school candidate’s application by objectively evaluating their suitability for a medical career. In addition, the letter should highlight the candidate’s strengths in terms of academics, achievements, and character to make them stand out from other candidates.

Medical school applicants have different options for who they can ask for a medical school letter of recommendation. Applicants can ask for a recommendation from any professor whose class they have taken or professionals they have interacted within an academic or professional capacity, such as research or internship. This includes professors, researchers, mentors, bosses, faculty instructors, clinicians, work/project supervisors, and volunteer programs representatives/officers.

When selecting a recommender and writing a medical school letter of recommendation, various things need to be considered.

A medical school letter of recommendation should discuss the applicant’s most prolific academic, research, clinical and professional competencies. The standard length of the recommendation letter is one page which is enough to sell the applicant to the admissions committee. Since it is a formal document, it can include the items discussed in the writing guide given below:

The first item on a medical school letter of recommendation is a header. The header should indicate the following information:

The next section of the medical school recommendation letter is the introduction. A proper introduction will discuss the following:

After the introduction, provide a comprehensive and detailed body. This section is meant to provide an individualistic assessment of the applicant’s suitability for entry into medical school.

Below are the general items to discuss in this section:

The last section of the medical school letter of recommendation is the conclusion. An exceptional conclusion will entail the following details:

Note: How many letters are required?

Given below are template and samples you can use to write your own letter:

[Salutation – To Whom It May Concern or Dear Admissions Committee]

[Applicant’s name] stood out from his peers due to his pro-active participation in class. Although he was part of a large class, he never shied from asking questions volunteering for demonstrations and in-class activities, which showed his great interest in academics and determination to succeed.

[Applicant’s name] was always part of the top 10% performers in my class, which I initially got to know him. His academic excellence can be attributed to his attentive nature, commitment, and resilience. I remember he struggled with a topic on [name of topic] but never gave up on excelling in it. Moreover, he began consultations in and outside class. I was impressed by his extensive knowledge in and outside the field of study.

All my students were required to submit a thesis as part of the coursework. So, he presented a thesis on [topic], which was unique in approaching First Response Medical Care. The faculty was impressed by his integration of biotechnology and Hospital response care systems. [Applicant’s name] is a brilliant mind with a vast untapped potential that I believe, with support and guidance at your school, will be able to achieve greater heights in medicine.

I firmly believe [applicant’s name] is suited for your institution and given a chance. He is destined to be a positive addition to the medical community. Do not hesitate to contact me through [recommender’s contact details].

I’m the chief biologist at NY General Hospital, and I’m writing this letter to recommend Sarah Hill for medical school. I was her supervisor during her internship in 20xx. She worked as a technician in the hospital’s biology department. During her internship, we had multiple interactions as she helped me conduct tests and prepare test results reports.

From the minute Sarah joined our team, she got along well with other colleagues, and everyone was excited to have such a positive person join us. Sarah pays attention to detail, which is a vital quality in any medical practice, and continuously records data neat and well-organized. By the end of her internship, Sarah had assumed more roles, like compiling departmental reports and preparing presentations during the hospital’s update meetings. She accompanied me to these meetings and conducted herself professionally in front of her seniors.

Sarah continued to work for us even with the surge of COVID-infected patients. This was a significant statement that she is willing and committed to medicine even during a crisis. This was impressive for a pre-med student with no prior field or industrial experience. However, she has the determination of the most successful doctors and physicians.

It is my professional assessment that Sarah is a suitable candidate for an opportunity to study in your school. She is a remarkable student and person, and I believe that her work ethic and determination will reflect your core values if selected. Kindly reach out for any queries.

I’m writing this letter to endorse Sam Hwang’s application for entry into medical school. I’ve had the privilege of teaching Sam in my Organic Chemistry I and II classes. Unfortunately, these two classes are interdepartmental, and I rarely get to know my students on a personal level. However, Sam was able to stand out due to his in-class participation and excellent academic performance.

Sam is a well-spoken student who knows how to articulate his views on different topics and, at some point, was the class representative. In his role, I was able to know him as a person. His compassion for others was evident in how he voiced the students’ concerns and problems like they were his own. His extensive knowledge of human anatomy is impressive, and it is evident that his love for biology did not begin in university. He is always up-to-date with issues in the medical community.

I’ve previously recommended Sam for a voluntary health care program in his community. His active role in the community is commendable, and, notably, Sam is more interested in people and their well-being than the average person. I believe his social skills will be beneficial in medicine, where he is expected to interact with people from different demographics.

Sam is the embodiment of an ethical medical student, and it is my pleasure to recommend him. I’m available for any questions you may have. My phone number is 555 5115 5008 3466.

Thank you for being so considerate.

I want to recommend Charles Morgan for medical school. As the head of the College of Health Sciences and a professor in Microbiology, I have known Charles for more than four years in both capacities. First, I taught him Introduction to Microbiology and Advanced Microbiology. He excelled in both classes and showed a great interest in wanting a career in medicine. Later on, I supervised his undergraduate project on “The social-economic effects of COVID.”

Charles’ grades have always reflected his academic proficiencies, and his interpersonal skills indicate a promising career in medicine. His dedication to his work has been admired by his peers and faculty alike. For two years, he was shortlisted in the “top 5 students to emulate” in our department. This earned him a position as the department representative in the University’s Student’s Board. This greatly improved his social and communication skills, which he lacked earlier.

He follows experiment procedures to the letter and has an impressive record of A’s in all Microbiology practical experiments, a feat that very few students in my classes achieve. In addition, Charles values his principles, a quality that goes a long way in implementing medical ethics and a school’s core values. Given the opportunity, Charles will be a welcomed addition to the medical community and your school. He has my full support in pursuing a career in medicine, and I recommend you be part of this yet-to-be doctor’s journey.

I am head of the Biology Department at XYZ University and had the joy of having Bailey in my Physiology course. I am proud to offer my recommendation of Bailey Lee to your prestige medical school program. During the short time, I have had her in my class, it was evident that she is a hardworking and diligent student. She completes her work with full commitment and when assigned a task, she delivers it on time. She can apply academic principles in creative and clinical ways, which sets her apart from many students.

Name of Attending (signed by hand)

During his year at XYZ Place, Michael proved himself to be a bright and hardworking student/team member. Volunteer duties at XYZ Place are mostly clerical. During the period that I have known Michael for, he had been able to interact closely with patients and healthcare professionals. I can clearly see the qualities of an excellent physician in him. He is able to diagnose a disease by just listening to the symptoms, which proves he learns and listens to all the lectures. He has set clear goals for the future and is on the path of achieving them.

Name of Attending (signed by hand)

Get free sample letters from here: 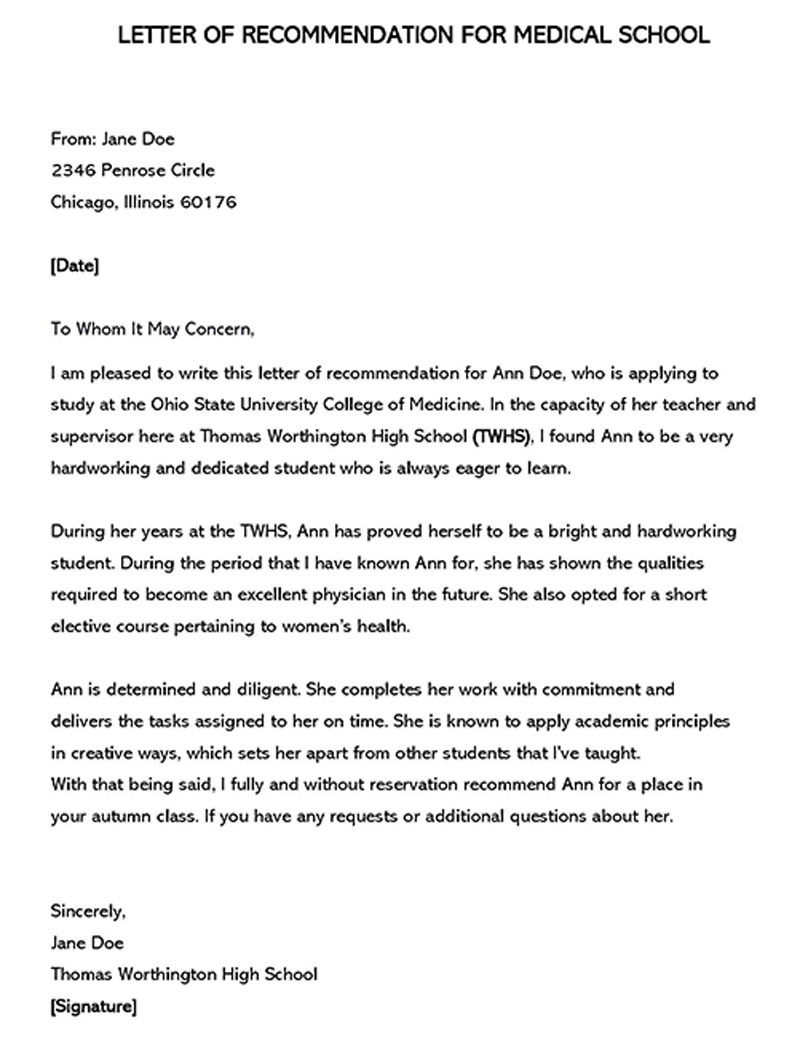 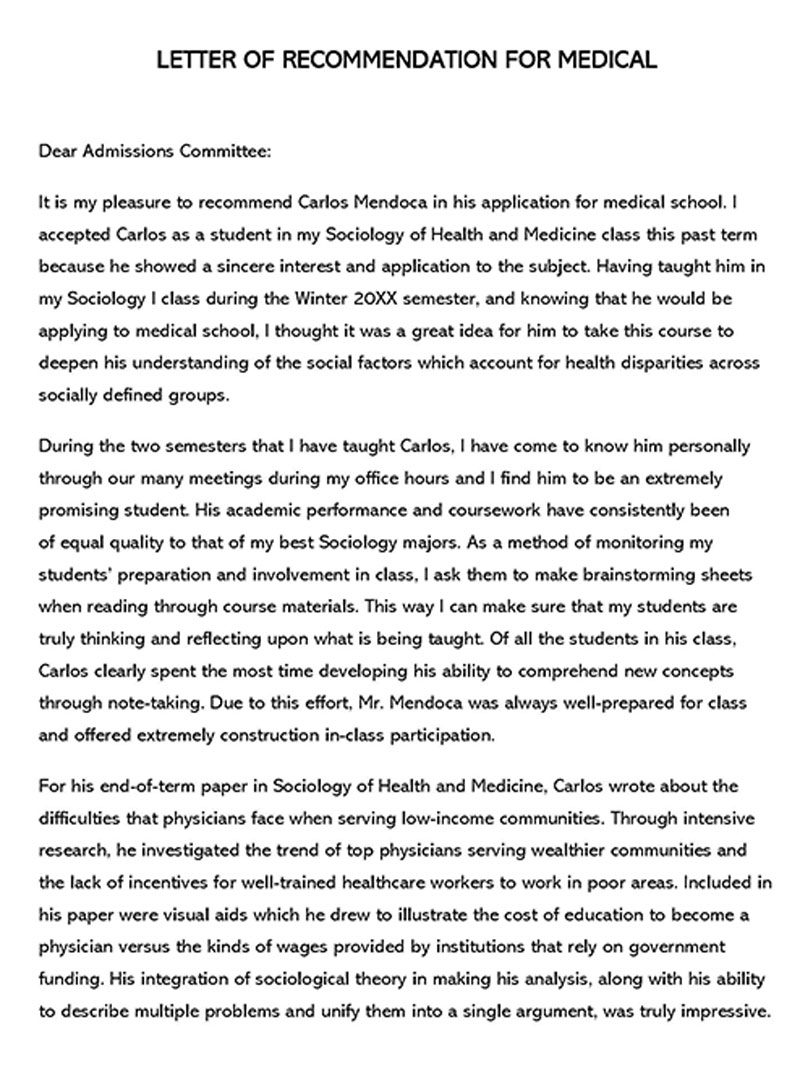 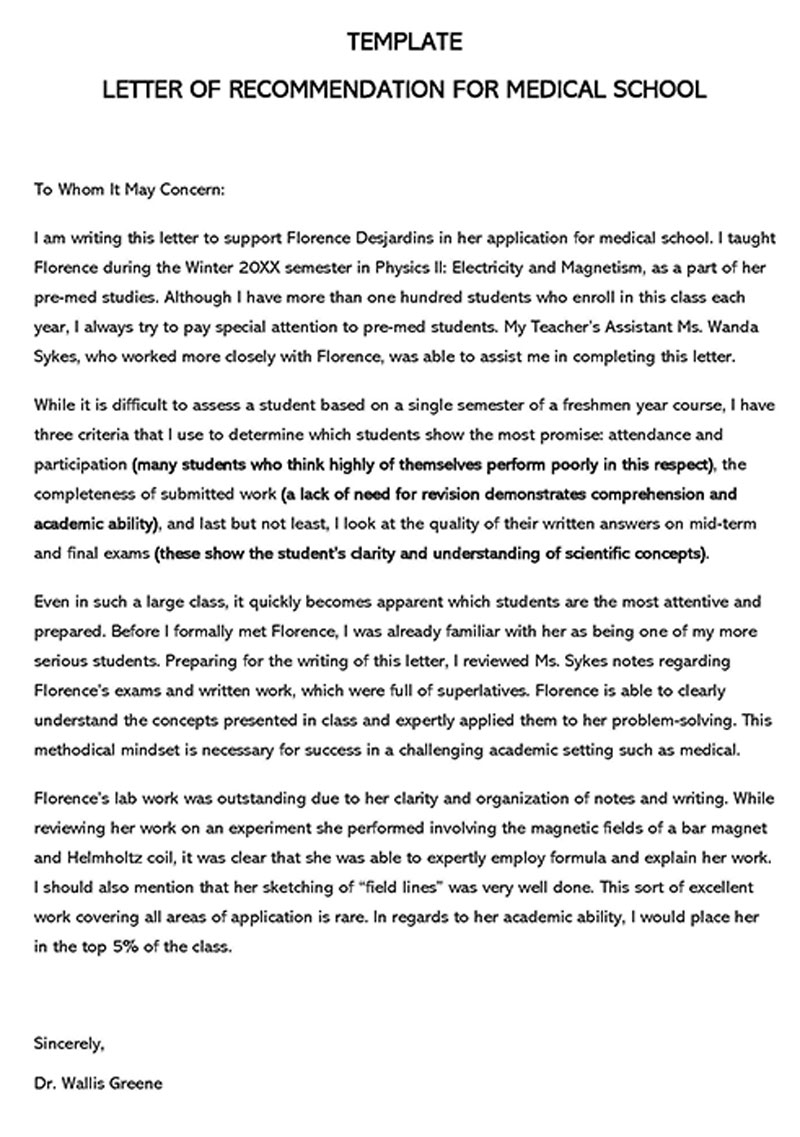 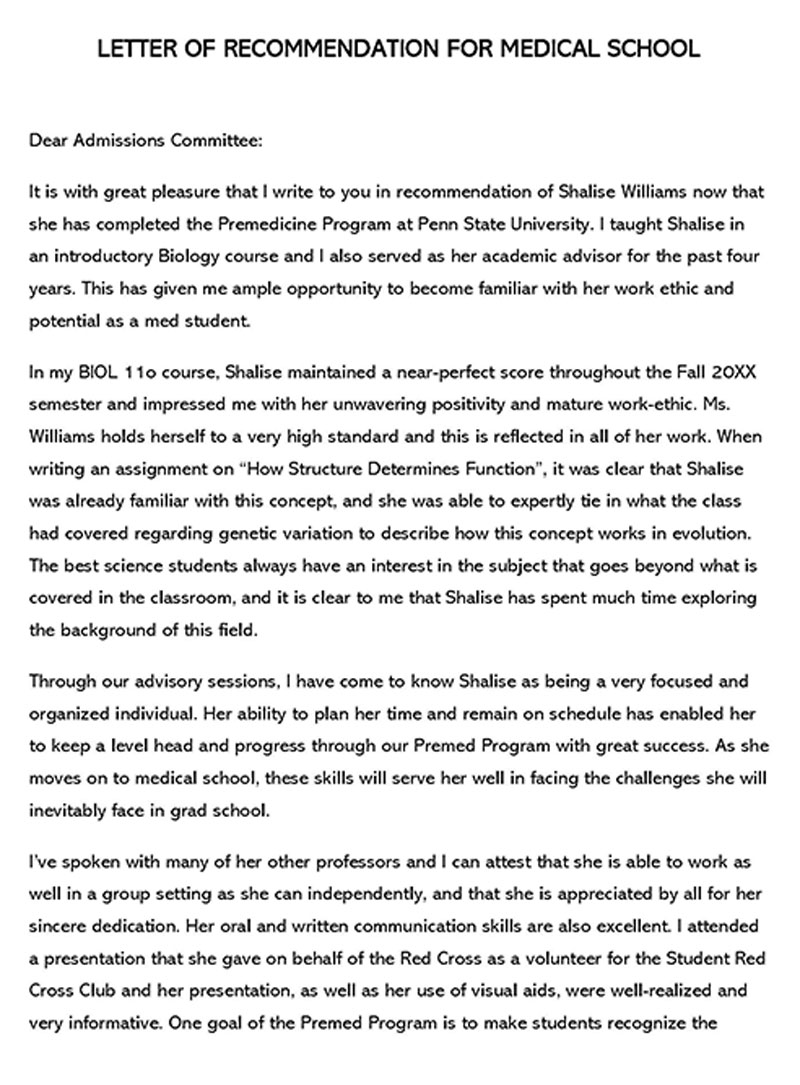 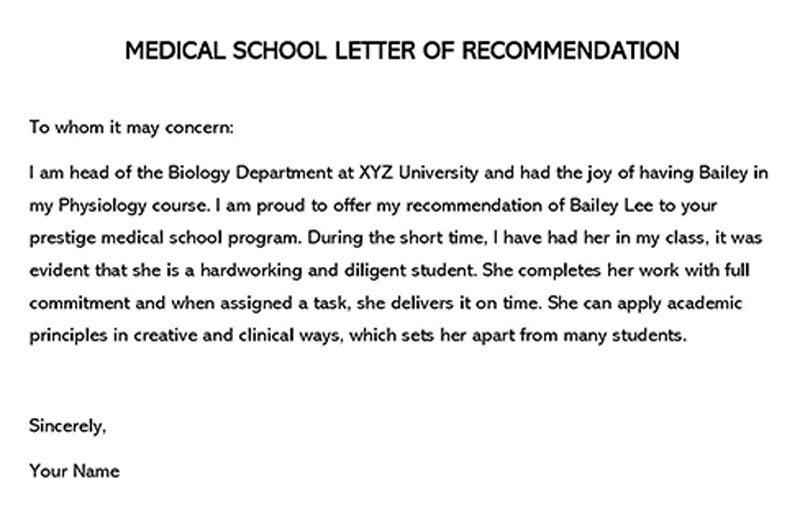 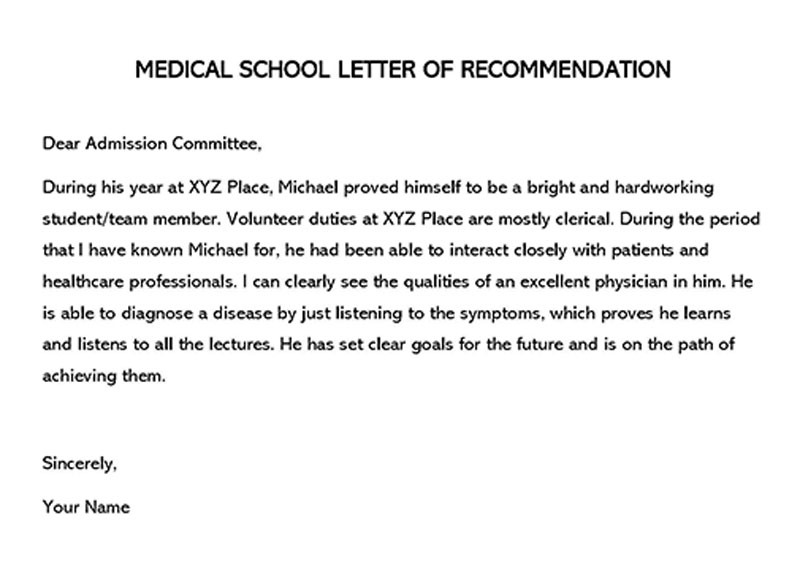 There will typically be many applicants applying for limited openings in medical school. Therefore, each recommender should present a persuasive medical school letter of recommendation that increases their candidate’s chances of getting selected.

Below are several tips that can be adopted to improve the value of the recommendation:

Recommenders should address the medical school letter of recommendation broadly unless specifically asked not to by the applicant. For example, instead of addressing it to a specific university or college, address it to the respective medical school/program.

Addressed to the admissions committee

Medical school letters of recommendation should be addressed to the admissions committee. This is because these are the people who will review the letter as part of the recruitment process. Also, if addressed to a general admissions committee, the letter can be used in different schools as it does not limit the applicant to a specific medical school.

Decide whether to write or not

A recommender is not obligated to recommend a student just because they were asked to. Instead, they should continually assess the situation and determine if they can craft a substantial recommendation or not. If yes, they can recommend the applicant; if not, they should politely decline.

When describing the applicant, the recommender should avoid generic descriptions. Remember, the recommendation shows the applicant’s uniqueness from the lot. Consider using specific examples to illustrate a student’s competencies instead of descriptive statements.

A medical school letter of recommendation should incorporate non-academic matters and attributes in moderation. Sometimes non-academic references can be used to illustrate a student’s desirable attributes.

Compare the candidate with others

Recommenders can compare the candidate with other students they have interacted with to illustrate exceptionality. This can play a vital role in giving the committee an idea of the positive addition the applicant will be in the medical profession.

Medical school letters of recommendation are vital documents when applying for medical school. The letter essentially provides the admissions committee with information about the medical student that can be used to assess their suitability for entry into medical school.

Most medical schools ask for more than one recommendation letter to get assessments of a medical student’s competencies from people in different fields. Medical school letters of recommendation have to be written professionally and must be signed and dated by the recommender. Also, they should be more academic-oriented but can briefly mention non-academic qualities and qualifications of the medical student.

How (& Whom) to Request for a Recommendation Letter [Tips]

Nursing Letter of Recommendation (How to Write + Templates)

How to Write a Letter of Recommendation (24 Free Templates)

How to Ask for a Letter of Recommendation From an Employer

How to Get Physician Assistant Letter of Recommendation