Permission Letter to Principal (Asking to Use School Space)

From time to time, the students will often want to make use of some facilities in a school for the sake of undertaking an activity that is outside the scope of the school. To be able to do this, they will have to seek express permission from the school principal to use the school space or a place.

It is the ‘letter to principal for permission’ that plays this vital role. It is primarily drafted by students and directed to the school principal. Under some exceptional circumstances, ‘outsiders’ too may draft it for the same reasons.

Writing Tips for Letter to Principal for Permission

Its language has to be pretty formal. Remember, this letter is equally formal. By formal, we mean that the letter has to be calm, positive, and respectful in tone and structure. Never attempt to gag or command the principal into honoring your requests.

You should address the letter properly to the principal. It means you have to showcase the exact names of the principal whom you would want to attend to you. That is to ward off any ambiguities from possibly arising.

The letter has to be accurate, both grammatically and semantically. Take time to weed out any spelling and punctuation errors too before submitting the same to the school head. You may be called for some further clarification letter on.

Other than being accurate, the letter ought also to be explicit to avoid any ambiguities. Many principals will usually summon the person who drafted the letter for further interrogations. Only by making everything explicit can any inconsistencies be prevented later on.

Lastly, the letter has to be concise and on-point. Try as much as possible to keep it short and to the point. Avoid too much fluff and overly verbose languages as this might dilute the meaning and render it too boring to read.

Sample Permission Letter (to Use Assembly Hall for Event)

RE: Request for Permission to Use the Assembly Hall for Dancing Competition

My name is Cindy Quincy. I am the head of the dancing club in our school. Each semester, we do hold dancing competitions that pit students from many other neighboring schools as well.

This semester, the dancing competition for the entire district shall be held by and in our school. The exact date is Monday, January 20th, 2020, around a month from today.

I take this early opportunity to seek permission from you about the use of the school assembly hall for the sake of hosting the upcoming dancing competition.

I eagerly await your feedback as I have to inform all the various stakeholders well in advance.

Permission Letter to Use Swimming Pool for Water Baptism

RE: Permission to use your school swimming pool for water baptism

I am Reverend Michael Johnson, the resident pastor of XYZ Ministry. Every month, we do organize mass water baptism for our congregation that numbers hundreds.


For quite some time, we have relied on the municipal pools, parks, and fountains. However, there has been a shift in the government policy of late.

A bylaw was passed to the effect that those municipal facilities should not be used for the purpose of water baptism. The core reason here being the ‘separation of church and state.’

It is against this backdrop that I ask you to allow us to use your school’s swimming pool to do that this time around. The baptism in question shall take place on the last Saturday of this month, roughly two weeks away.


Your timely response will be highly appreciated.

Thanks and Regards,
Sincerely,
FirstName LastName 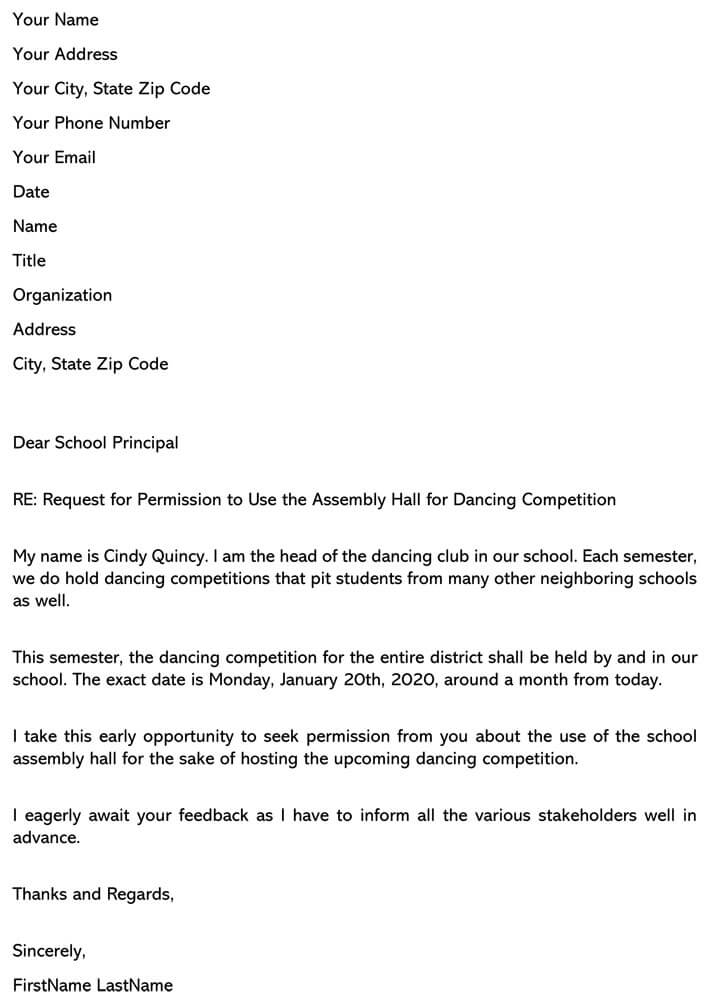 Permission Letter to use Assembly Hall for Event 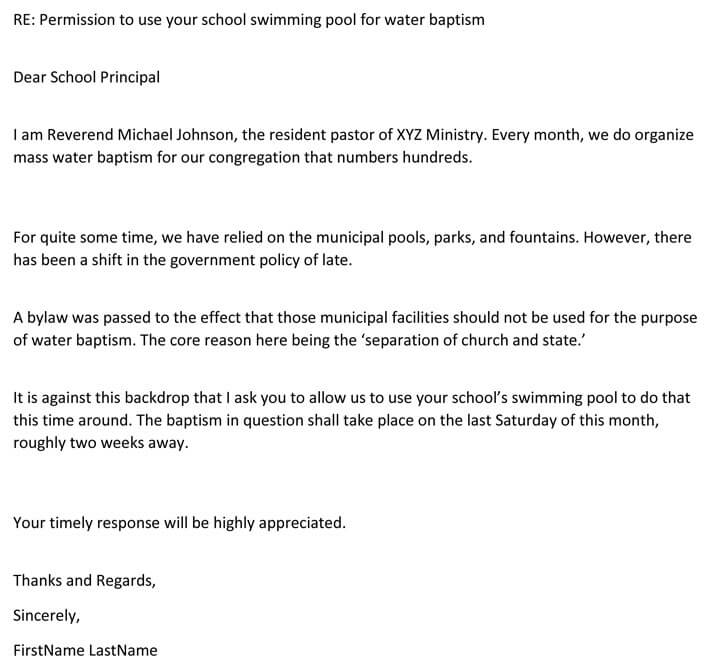 Permission Letter to Use Swimming Pool