Your Right to Request Validation

It is not necessary that the debt collector who is trying to contact a person is trying to collect legitimate debt, as there are chances of fraud. Therefore, it is extremely important to make sure that the debt is real. Sometimes a debt collector would be asked to pay a debt that is already paid and therefore, it is important to find detailed information on the debt.

People that owe the debt have permission from the federal law to ask the debt collector about the proof that they owe the debt. It would be the best way to find out whether the person actually owes the debt or whether it is just a fraud. However, it is very important to keep in mind that the request validation for the debt would be time-sensitive.

Rights of an individual would not be protected if they are making the debt validation request over the phone.

Once the debt collector is asked for the proof, they cannot send the person who owes debt any letter, calls, or list any debt on the credit report of this person. It is very important to be aware of all the rights and it would be advisable to take the recommendation or ask for legal advice from someone who is knowledgeable. Usually, people do not have enough information and they try to search for it online. Despite the fact that there is tons of information available online, it is wise to take someone’s opinion as well who is knowledgeable.

Things You Should Do When a Debt Collector Calls

It is important to keep a few things in mind such as:

Things to Look for in a Debt Validation Notice

The debt validation notice should include the following information:

Should you Request for Validation of Debt Letter?

It would be wise to write the request for validation of debt letter because of the following reasons:

Tip: It would be wise to send the letter through the certified mail so there could be proof of the receipt and the letter should also include the account number, method the collector used to contact the person, date when they contacted the person, and a statement for providing the request for the validation of the debt.

When You Might NOT Want to Request Validation of Debt

However, it is important to keep in mind that there are certain circumstances under which writing the request validation of debt would not be favorable for the person, such as explained by Strauss:

What if You Don’t Receive the Validation of Debt?

There is a possibility of not getting the validation of the debt. There are chances according to Strauss that the debt collector would not the validation of debt as they are not likely to have enough information about the person who owes the debt, that is, they cannot prove much and would not be sure whether the person is going to repay the debt or not.

It is possible that the debt collector cannot verify the debt as well. Despite the fact that a person does not receive the validation letter, the debt would still be in their credit report. There is also a possibility that the collector would want to send it; however, due to some reason, they had just decided not to send the validation of the debt. On the other hand, the collector does not have any time restriction and thus, they are not confined to a 30-day time limit.

How to Write a Debt Validation Letter

When writing a debt validation letter, it is important to ask the following things in the letter:

Given below is a sample letter:

This letter is in response to a (insert how the information was received, for example, a letter or a phone call) received by you (insert date here, be very specific and mention the date of the letter or the phone call). It is a request that you provide validation of the debt.

I will file a complaint with the Federal Trade Commission and the (you have to insert your state here) Attorney’s General Office if you fail to comply with this request. There will be criminal claims and civil claims. 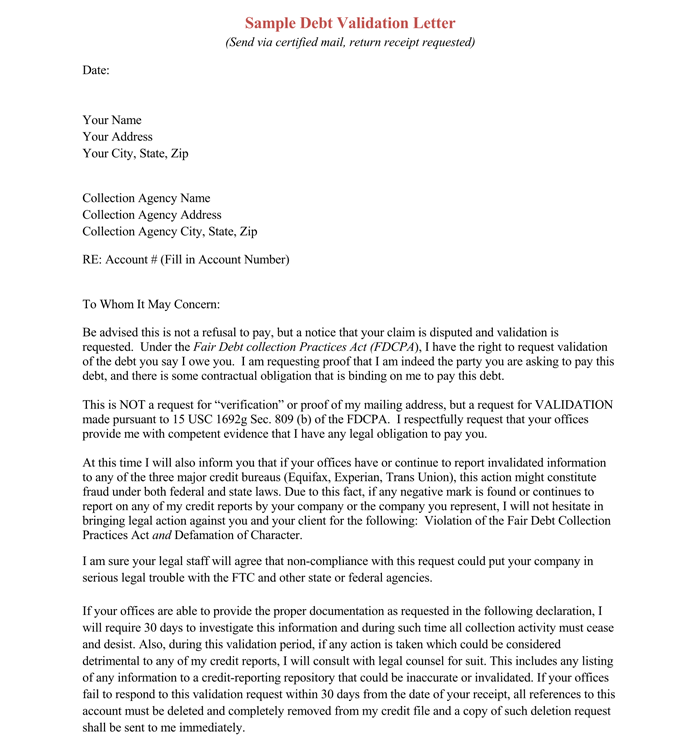 Sample Letters to Creditor (When You Are Unable to Pay) 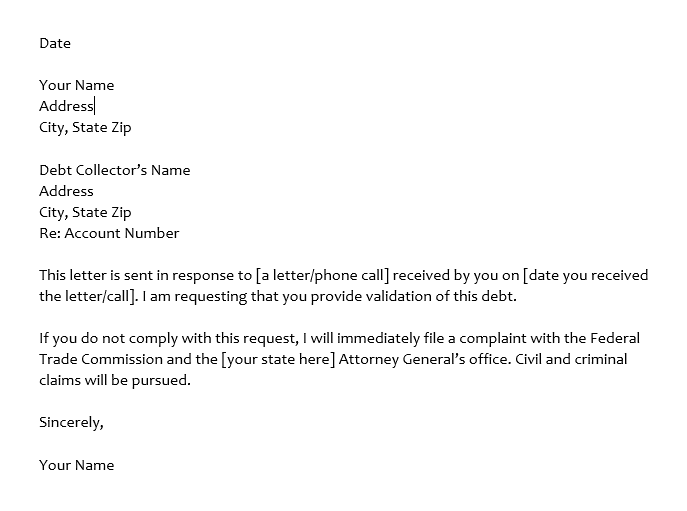 What to Do if the Debt in Question is NOT Yours?

When a person owes a debt, that is quite a serious situation; however, when they do not owe the debt but still receive the notice from the debt collector, now the question is what to do if the debt does not belong to them.

There are different tactics, which the debt collectors would use in order to collect the debt from the people who owe them for example, they can send letters to the person, call the person, listing the debt on credit report and they can even sue the person who owes the debt.

What to Do if the Debt in Question is Yours?

On the other hand, if the debt in question actually belongs to you and there is enough verification from the collector as well; check for the statute of limitations, credit reporting time limit, and find out the relevant options. Try to settle with the debt collector a percentage or agreement, pay for delete agreement especially if the account is listed on the credit report.

The ideal situation would be negotiating with the debt collector and get the debt removed with a settlement amount. It is possible to get the debt removed with the full settlement as well. If the collector is not ready to delete the entry from the credit report, ask them for paid in a full update or at the very least Paid. Settle. It is wise to take such actions in order to boost the credit score; however, there is usually a seven years mark to it after which negative reporting might fall off depending on the scenario. It would be wise to check the official websites of the relevant states to get updated information.